Cycling must be on the COP26 agenda

Image projected onto the M74 in Glasgow

Cycling must be on the COP26 agenda

On the eve of the UN COP26 Climate Summit in Glasgow, the time is right for world leaders to recognise cycling as a solution to the climate crisis. Cycling UK's campaigns and policy manager in Scotland, Jim Densham, explains how you can speak up for cycling and the climate

World leaders will be in Glasgow for the COP26 conference starting on 1 November.

Join us in calling on them to put cycling on the agenda and investing in cycling as an important solution to the climate crisis.

One of my most memorable encounters with nature came towards the end of my longest ever ride in one day, 110 miles from Hull to Wisbech.

Dusk was coming down on our weary train of 4 riders as we ground out the final miles through the Lincolnshire fens.

Along one of the many straight flat roads a ghostly barn owl flew only a few metres to our left, silently hunting for prey along the adjacent ditch.

That image etched into my memory (probably due to exhaustion) remains a reminder why we were on the 530-mile ride from Edinburgh to London to attend a lobby of the Westminster Parliament on 17 June 2015.

We cycled all those miles to join thousands of other people, all at Westminster to meet their MPs and express their concerns about the need for urgent climate action.

Our Team Sky-lark ride (a play on the Team Sky name) also visited RSPB reserves on route and raised awareness of the impact that climate change is having on nature, which like the barn owl, is already suffering from human pressures such as habitat loss. 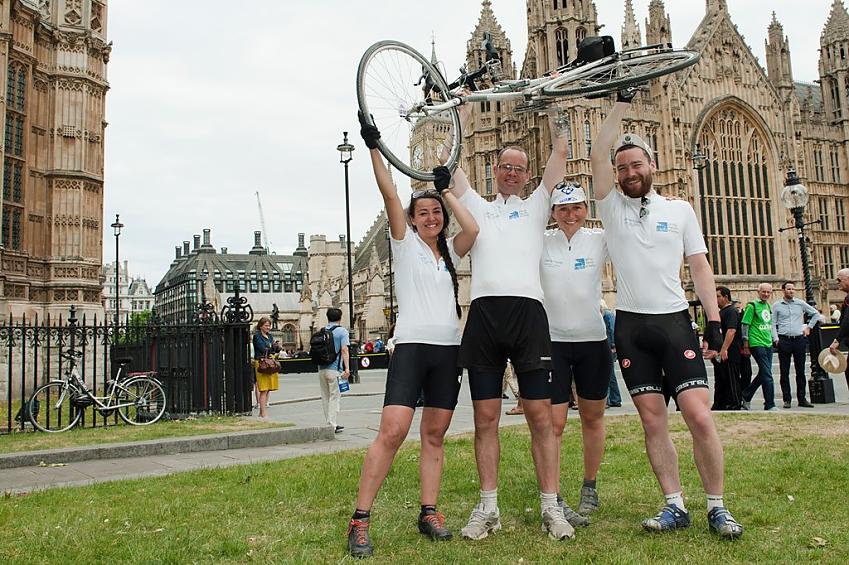 The long road to COP26

Six years later, we are on the eve of the UN COP26 Climate Conference in Glasgow where world leaders and delegates will try to agree long awaited action to cut damaging climate emissions.

As in 2015, decision-makers need to hear the voices of people concerned about climate change and the delays in action.

Like our team of Sky-larks, some people are going to extraordinary lengths to get to COP and raise their voice.

As I write this blog post, there are riders out on the road heading north to Scotland, some of them are listed on our COP26 webpages.

Jesse Stevens is a teenager from Devon riding to COP to call for climate action and greater investment in safe cycle infrastructure.

A group of doctors and health professionals from Great Ormond Street Hospital are pedalling to Glasgow to highlight that climate change is also a threat to health.

There are many others on their way including one of my colleagues from Cycling UK.

Cycling needed more than ever

Some of groups riding to Glasgow have planned a route which takes them through Keir Mill near Dumfries, where blacksmith Kirkpatrick Macmillan invented the first self-propelled bicycle in 1839.

The humble origins of the bicycle 182 years ago were just 70 miles from where the world’s leaders gather next week in Glasgow, but this technology remains as low-carbon as ever and just as relevant to our future.

Like the overlooked Cinderella, cycling must go to the ball at COP26 – cycling must be discussed as part of the solution to decarbonising our transport systems

The UK Government, who is hosting COP26, have recognised the need for transport to be on the conference programme but, disappointingly, their focus is heavily on promoting electric vehicles, with investment in active travel and public transport squeezed out.

Send a message to politicians: this machine fights climate change

Only 18% of the world’s population owns a car, so COP’s focus on electric vehicles looks like it will benefit people in rich nations rather than those affected most by climate change and least able to afford a bike or public transport.

Like the overlooked Cinderella, cycling must go to the ball at COP26 – they must be discussed as part of the solution to decarbonising our transport systems.

The pedal cycle has been with us for many decades - there’s no need to ‘reinvent the wheel’.

What we urgently need is for the COP delegates to agree that all countries, including our own nations in the UK, need to invest in this proven low-carbon technology by creating the safe cycling infrastructure that will enable more people to cycle for everyday journeys.

Find out more about what we are calling for during COP26.

Join us for Pedal on COP26

Last week we went out into Glasgow after sunset and projected images onto iconic locations around the city to send a message using the slogan ‘This Machine Fights Climate Change’.

With the eyes of the world on Glasgow we want to create lasting images about the vital role of cycling ahead of the 2-week COP conference, and we'd love for you to help amplify this message on Twitter or other social media.

At Cycling UK we’ve been working with our friends at Pedal on Parliament to coordinate feeder rides to peaceful COP26 marches and events in Glasgow and around the UK.

Our COP26 webpages have more information on rides near you on and around the 6 November.

If you are organising or joining a ride near you please let us know at campaigns@cyclinguk.org so that we advertise it to others on our website.

And if COP has got you fired up to get more involved you join our Cycle Advocacy Network (CAN) and register as a cycle champion to receive information about upcoming CAN events and campaign action suggestions that will help you build momentum locally.

Send a message to your politicians

As in 2015 when I rode to London to talk to my MP, it’s important that you have the opportunity to tell your elected representatives that you want action on climate change and that investment in cycling is a solution that must not be ignored.

We have also set up an online action which enables you to send a message via Twitter to your MP, MSPs, MSs or MLAs.

And if you don't use Twitter, you can use other social media platforms to share the message with your friends and family.

Please do take part in this simple action asking them to support investment in the network of safe cycling infrastructure needed to benefit people, the planet and even barn owls.

The Government still isn't on course to meet its 2025 cycling targets. So what now? View

COP26: Invest in cycling and cut carbon View
Join our 70,000 strong membership and together we can make a better world by bike Join
Cycling UK continues to support the UK to cycle
This remains true during this difficult period with the ongoing threat of coronavirus Covid-19
Read our latest advice on cycling