We pedalled on COP - now its time for local change

Thousands of cyclists joined the Global Day of Action in Glasgow and beyond
By Keir Gallagher
Monday, 8 November 2021

We pedalled on COP - now its time for local change

On Saturday, over a thousand cyclists marched through Glasgow, many of them having cycled through wind and rain from across Scotland. Campaigns manager, Keir Gallagher was at the march, and reflects on how this incredible momentum can be maintained to secure change in communities across the UK

If there’s one thing most environmental marches have in common, it’s samba bands, megaphones, and booming sound systems. But for me, it was a new sound that really resonated around the cycling bloc at the Global Day of Action in Glasgow on Saturday – the sound of a thousand bike bells ringing at once.

The tinkling tones reminded me distinctly of waves softly rolling in with the tide on a pebble beach, the small stones and shells ringing against each other with every wave. At first glance, those waves may not seem so devastatingly powerful as huge swells crashing against the rocks, but the effect in the end is just the same – a rising tide cannot be stopped.

I left the demo on Saturday with a distinct feeling of optimism that the tide of cycling is indeed rising – not through crashing blows, but through the power of many small waves rising together as one.

Add your voice - write to your council

Waking up on Saturday morning to find the autumnal sunshine of the week swept away by blustery wind, swirling rain, and a chill in the air, my heart went out to Pedal on Parliament, who organised the Pedal on COP26 feeder rides and the Cycling Bloc of the march in Glasgow, and the hundreds of cyclists who had worked so hard to carefully plan and promote Pedal on COP rides from across the country. 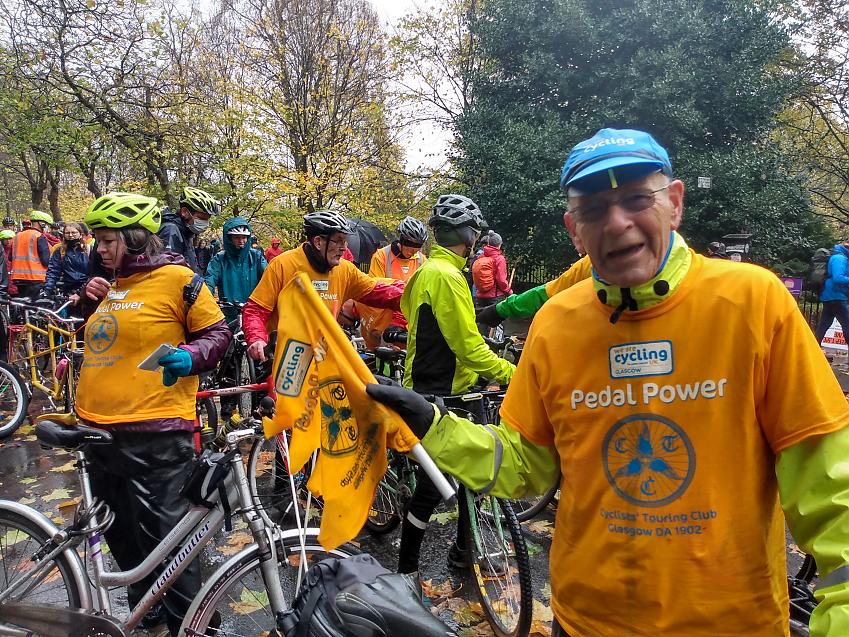 The wind and rain didn't deter thousands joining the march

And, I have to admit, I was worried we’d see a diminished turnout as a result. But those doubts were utterly banished as cyclists began gathering along the Kelvin Way in Glasgow – a road which, incidentally, was one of the first to be closed to traffic and instead opened for walking and cycling in the early days of the pandemic, a fitting example of how local political decision making can have a real and positive impact for active travel.

As we joined Pedal on Parliament and local campaigners in raising our banners, cyclists fed in from across the country – Edinburgh, Stirling, Dundee, the Borders, and more – all of them sodden but none of their spirits dampened. Others had ridden from England, from Holland, and from Germany.

The turnout was amazing – well over 1000 people (and at least two MSPs) joined the sustainable transport bloc with cycles of all shapes and sizes, and I raise my hat to everyone who fought the weather and gave up their weekend to help us send the message that cycling fights climate change.

And, just like the tide, the action wasn’t limited to one part of the UK – mini-Pedal on COP rides, both large and small, were held across the four nations, and indeed in other parts of the world.

We've come this far - but what next?

But of course, the key question is: what next? COP still has a week to run, and now the business-end of the conference approaches and delegates and diplomats negotiate over the fine wording of international treaties and high-level targets.

But while those decisions are being made in Glasgow, they aren’t the decisions which are going to make cycling safer and more accessible where you live – only local politicians have that power. That’s why we must now maintain this momentum and shift our focus to the local levers of change. 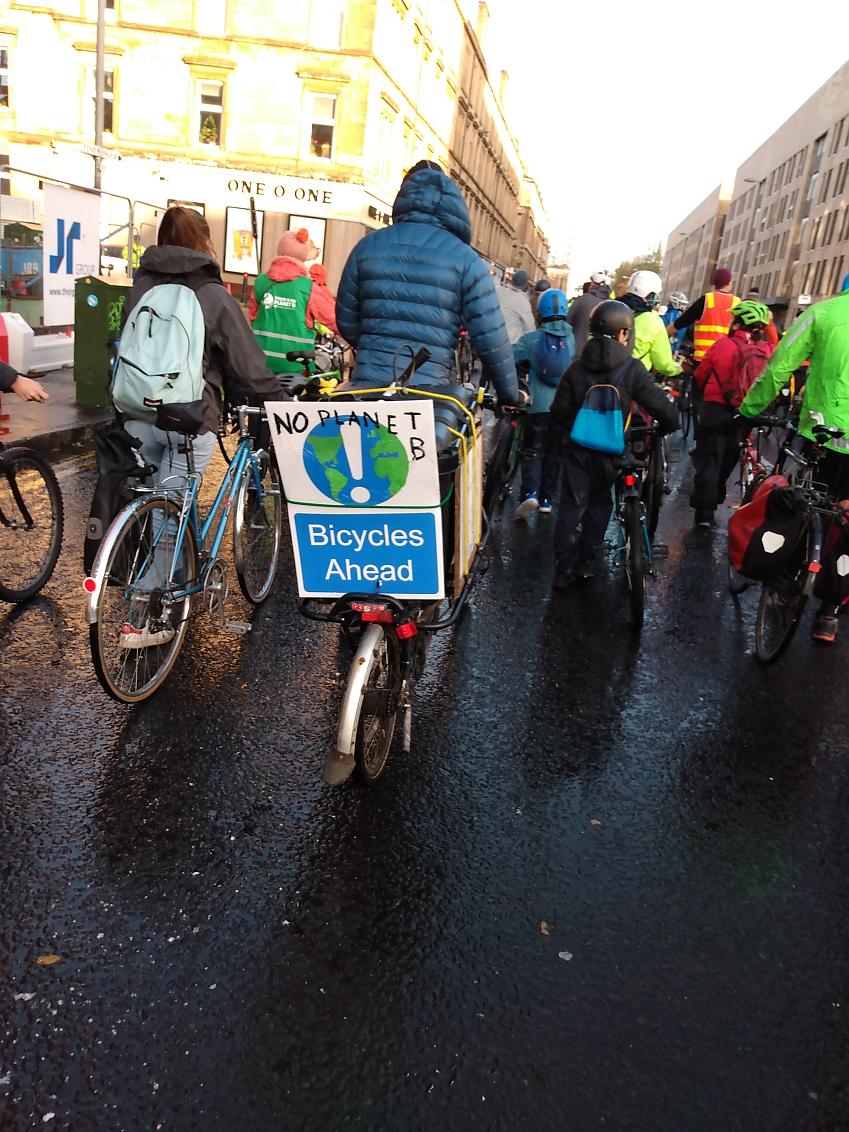 Cycles of all shapes and sized were spotted!

There’s no doubt that we need more government funding for cycling, but without the support of local authorities, the money which does exist risks being wasted or poorly spent. In Scotland, for example, we’ve seen a commitment to raise funding for cycling and walking to 10% of the transport budget – a key ask from our ‘Manifesto for Cycling’ released in the run up to the recent elections.

Yet councils across the country lack the quality network plans needed to ensure new infrastructure links together effectively and gets people where they need to go. Without those plans, they can’t make the most of any investment.

And where elections aren’t taking place, that doesn’t diminish the influence local campaigners can have in influencing their council – just look at what Cyclox achieved by working with other campaign groups: securing 20mph speed limits in urban areas across Oxfordshire.

That’s why we’re asking you to write to your council’s cabinet member for transport, to ask them what they’re doing to enable more people to cycle, and that they grasp this opportunity to help tackle climate change.

Write to your council's Transport Lead

Polls consistently find huge support for local measures to enable cycling and walking, and interventions to make cycling safer are also proven vote-winners, but often that support is drowned out by a vocal minority. You can ensure that this message gets directly to your council’s senior transport decision-maker.

And once you’ve taken action online, why not join the movement to keep the up pressure, and the momentum? Our Cycle Advocacy Network (CAN) has opportunities for you to get involved in securing local change – however much or little time you have to spare.

Whether you want to join a local campaign group or become a CAN rep or a cycle champion, you can be part of that wave rolling steadily up the beach, and add your voice – and your bell – to thousands of others.

Why Cycling UK is marching during COP27 View