Cycling UK speaking up for cycling at COP26

Cyclists with the COP26 venue in the background

Cycling UK speaking up for cycling at COP26

Cycling UK staff have been in Glasgow this week attending COP26 events. Our campaigns and policy manager for Scotland, Jim Densham, explains how we've been leading the calls for cycling to be on the official COP26 agenda and how you can use our online action to send a message to politicians

COP26 has kicked off in Glasgow - join us in calling on politicians to invest in cycling as an important solution to the climate crisis.

On Sunday night, Glasgow was a colourful mix of costumes, banners, and police in hi-viz, as people arriving for COP26 mixed with local Halloween-night party goers.

Ready or not, the city is hosting the world at the UN COP26 climate conference, and it feels like the whole world is in my city either in person or watching virtually.

Essentially, COP26 is a huge ultra-secure conference about how to save the planet, where the great and the good mingle and listen to talks about science and solutions.

At the heart of the conference, surrounded by the COP razzmatazz and shielded from the protests going on outside the ring of steel, hardworking negotiators from country delegations finesse the wording of agreements on issues such as halting deforestation and financial assistance.

As the UK host, PM Boris Johnson’s mantra for the COP has been ‘coal, cars, cash and trees’, and means that on transport decarbonisation there’s an overwhelming focus on electric vehicles and charging infrastructure rather than promoting active travel and public transport.

Last week I wrote of our frustration that cycling has been forgotten by COP26 organisers.

Our message, that cycling must be on the COP26 agenda, highlighted by our fantastic projected images using the slogan ‘This Machine Fights Climate Change’, has had global reach and been adopted by many big names on social media to create a growing clamour for cycling to be included in COP agreements.

Journalist Carlton Reid toured the conference ‘blue zone’ on Monday, and showed in a walk and talk video how there’s a formula-e car on display but no bikes, and subesquently wrote an excellent article for Forbes.

Also on Monday, Cycling UK’s head of campaigns, Duncan Dollimore, spoke at a COP26 Climate Forum in Glasgow and reiterated the need for cycling to be part of the climate solution.

At the event organised by BYCS, he said, "There is an opportunity to do something different to reduce emissions - but cycling needs to be part of the conversation".

Cumbria’s cycling mayor Richard Ingram, explained at the Forum that a switch from petrol and diesel cars to electric without reducing car numbers isn’t a viable option, saying “you cannot have successful cities by overuse of the car".

Cycling UK has also joined with over 100 other organisations to sign an open letter to governments at COP26 organised by the European Cycling Foundation which says ‘World leaders must commit to boosting cycling levels to reduce carbon emissions and reach global climate goals quickly and effectively.’ 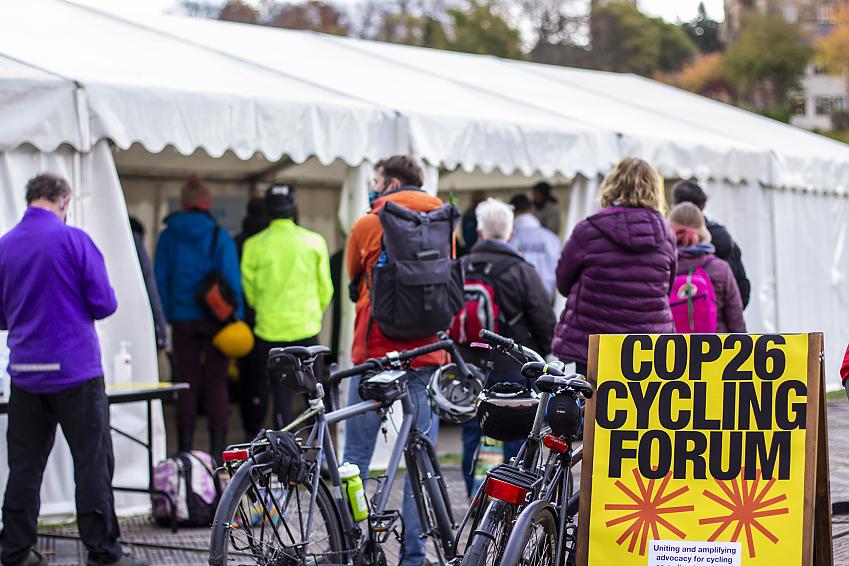 Organisers of the COP have also been heavily criticised for poor diversion routes for cyclists around the COP26 venues and a lack of bike parking spaces at the COP venue.

It’s a terribly disappointing that cycling has been forgotten, and a missed opportunity for Glasgow to show the world that cycling is in its plans for a carbon-neutral city.

But its not all doom and gloom in Glasgow – there’s a lot of positive energy about building a better future.

Cycling UK’s head of development in Scotland, Suzanne Forup had a fabulous time speaking to girls about climate change, gender and cycling, alongside a panel of public health experts at the Girls@COP26 event.

It’s time to channel the positivity towards those who need to hear the message by reminding our governments and politicians that ‘This Machine Fights Climate Change’ and that cycling is for everyone.

On Saturday 6 Nov, hundreds (maybe thousands) will ride into Glasgow from as far away as Inverness to Pedal on COP26 and join a Cycling Bloc at the mass march. You can also join a COP26 ride near you.

This is the main moment during the two weeks of COP26 for ordinary people to join together and speak up for the climate and for cycling as a climate solution.

Even if you can’t take part in a ride, there are ways you can raise your voice. Use our online action to send a message to your MP, MSP, MS or MLA and ask them to invest in the safe cycling infrastructure that we so desperately need.

Join us in adding your voice to the growing call for cycling to be discussed at COP26 and invested in by our governments in all four nations of the UK.