Jessie with Catherine from The Adventure Syndicate (Credit: Jack Reed)

When climate activist Jessie decided to cycle 570 miles to the climate conference, it turned into a movement. Now she wants as many people as possible to join her on the journey to show world leaders that pedal power is the sustainable transport solution

Jessie is on her way to Glasgow after a send-off from Newton Abbot on Wednesday 20 October brought together local supporters and members of cycling groups to wish her well for the hundreds of miles ahead.

Many of them took to two wheels to join her as she set off, with a group of around 40 people riding the 55 miles to the first day's destination of Taunton, arriving weary but elated.

We'll be following Jessie's progress but if you'd like to get involved you can sign up to help ride the cargo bike as part of the relay if it passes through your area.

There are many ways to get involved with COP26. Join one of several feeder rides to the peaceful mass march in Glasgow on 6 November, or organise your own ride to one of the COP events elsewhere in the UK.

Cycling UK member Jessie Stevens was determined to attend the COP26 climate summit in Glasgow to make sure that the voices of young people are represented at the event. There was just one problem for the 16-year-old activist: how to get there from her home in Devon!

With flying out of the question for obvious environmental reasons and the train too expensive, Jessie turned to active travel for the 570-mile journey. She considered walking, but decided the time required would involve taking too much time off school, so cycling was the obvious solution.

This inspired Jessie to take things one step further and start her own movement, People Pedal Power, to demonstrate that the UK’s current transport systems are ineffective and unjust, and to take this message to the world leaders attending the major UN event, which takes place between 31 October and 12 November.

Jessie said: “I’m concerned that COP26 won’t result in any meaningful action so I decided to take action myself, to join the global youth climate movement, and to get as many people together as I can to shout about the change we want to see from our leaders.”

She is looking forward to the challenge, admitting that just a few months ago she was exhausted after riding ten miles. Following a serious training regime of long rides on Dartmoor on her newly acquired used Merckx road bike, named “Eddy” after the legend himself, combined with high intensity turbo sessions indoors, that all changed. Jessie recently completed her first 70-mile Audax with relative ease, despite the hilly terrain.

For her father, who is accompanying Jessie on her trip, this training has rekindled a love of cycling. “For the past few years my dad hasn’t done so much cycling, so this has forced him to get back into it and he’s now loving it again – although he didn’t love it at first when I was dragging him out on some wet, cold winter rides as he is definitely a fair-weather cyclist!”

As well as her increased fitness, Jessie has discovered the many benefits of cycling as a young adult.

“It provides me with huge amounts of freedom and independence to explore my local area and new places further afield. I really love how having to put effort into travelling means that you really get to understand the landscape - it is a slower, more mindful way to travel, providing a richer experience.”

This also makes cycling the perfect mode of transport for her COP26 trip.

“To me, cycling is a very community orientated mode of travel. This perfectly fits my visions of #ride2COP26 as it gives space for many individuals to join the ride, gathering force and power. The more who join the louder our demands are!”

Jessie’s vision of a cycling-led movement will be realised on her journey as, along with her father, she is being supported by a whole network of other activists and ordinary cyclists alike. The Adventure Syndicate, a collective of female endurance cyclists, is organising a cross-country cargo bike relay, inviting people to support Jessie by taking a turn of pedalling the cargo bike carrying everything she needs to be self-sufficient on her journey. They are also fundraising to cover the cost of making a feature length film of the whole journey, focusing on the stories of the people Jessie meets along the way and highlighting the power of people-led action.

Catherine Dunn of The Adventure Syndicate said: “We’re delighted to be supporting Jessie on her journey. The cargo bike will not only provide physical support, but will also tangibly represent one of the viable solutions to developing a more sustainable transport system; after all, this journey is not just about highlighting what is wrong, but also about demonstrating solutions.”

Not to be left out, a number of Cycling UK staff members have already signed up to take part in the relay and the organisation is encouraging members and groups to get involved with COP26 in a variety of ways. If you’re close to Glasgow, you can join one of several feeder rides to the peaceful mass march on 6 November, or organise your own ride to one of the COP events elsewhere in the UK. 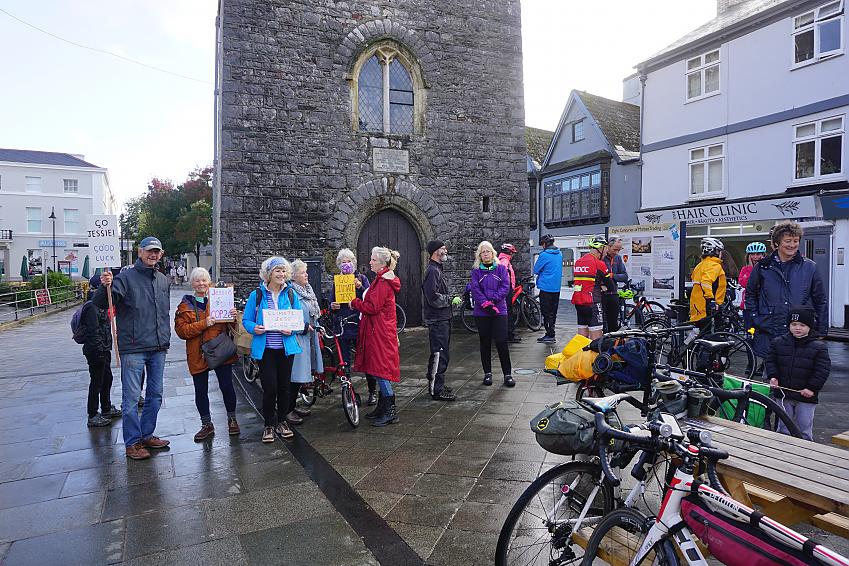