COP26: recognition for cycling, but what next?

The Cycling Bloc at the climate march in Glasgow

COP26: recognition for cycling, but what next?

After the whirlwind of events, negotiations, flag waving and chanting during two weeks of COP26, Cycling UK’s campaigns and policy manager in Scotland, Jim Densham, looks back at what has been achieved for cycling

Now that COP26 is over, Cycling UK is shifting campaigning focus from global to local. Join us and use our online tool to send a letter to your council’s transport lead (or MLA in Northern Ireland) and ask them what they're doing to enable more people to cycle and reduce transport emissions.

On Saturday evening, Alok Sharma’s gavel came down to end COP26. Delegates and the media went home, and Glasgow started getting back to normal.

In our house the following morning, we said farewell to our last visitor who had stayed with us throughout the two weeks of COP.

She’s a friend and former colleague who works for a nature charity and was at COP26 as an observer, amongst the country representatives and negotiators, advising on the action needed for the planet and its nature.

Her experience of Glasgow and many previous COPs is that climate diplomacy is a slow process frustrated by compromise, but her opinion was that there had been significant progress for the climate in the Glasgow Climate Pact.

She also explained that even though the predictions for nature and humanity from runaway global heating are so awful, if you don’t stay positive and celebrate the wins you would end up crying in a corner and be unable to have a positive impact.

This human need for staying positive and recognising success was also well expressed by Guy Shrubsole, who wrote on twitter: "As a campaigner, I get the need to continually call for more. But movements also die if they don't think they achieve anything."

Instead of looking back at COP26 as "Blah, blah, blah – car, car, car", let’s celebrate a success won by thousands of cyclists who campaigned together with the overwhelming positive message that "This machine fights climate change"

What did COP26 achieve for cycling?

As many were predicting, the Glasgow Climate Pact was a messy compromise, and COP26 was seen as a partial success.

Your point of view on its merits depends on what you wanted at the start, and people such as Greta Thunberg have continued to describe it as "Blah, blah, blah".

Certainly, there was insufficient commitment from countries to limit warming to the ‘safe’ limit of 1.5 degrees, based on the pre-industrial levels.

However, progress was made at COP26 in the details, so what agreements were made to decarbonise transport, and was the role of cycling recognised?

Late on Thursday, I was on a train back to Glasgow from London frantically trying to verify the accuracy of breaking news reports that active travel had been included in the COP26 transport declaration.

Thankfully it was true, as a last-minute intervention by a delegate from the EU saw recognition of the role of active travel included in the text. 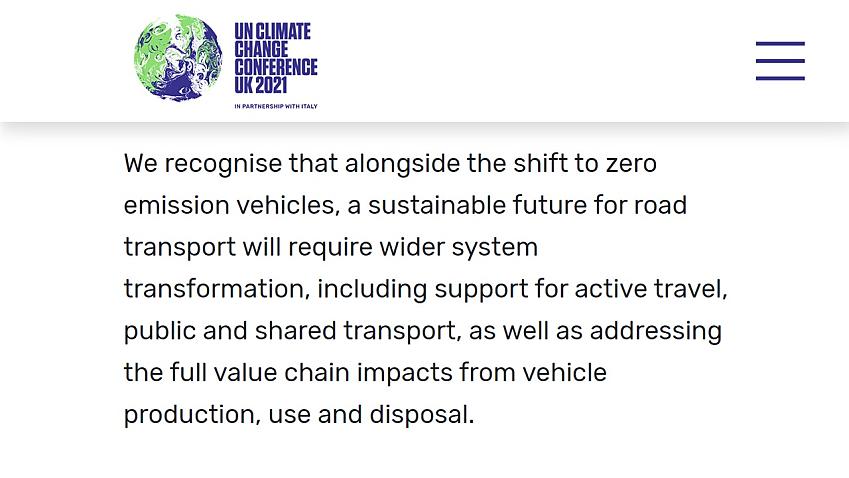 Text in the COP26 transport declaration

Before COP began, we highlighted that cycling had been excluded from the agenda at the COP in favour of discussion on electric vehicles and charging points.

Cycling should have been included from the start, but instead of looking back at COP26 as "Blah, blah, blah – car, car, car", let’s celebrate a success won by thousands of cyclists who campaigned together with the overwhelming positive message that "This machine fights climate change".

Pedal on Parliament set the foundations for this success with their action in April and by coining the "This machine fights climate change" slogan.

With their agreement, we used it for some of our projections ahead of COP to highlight that the humble bicycle is a solution that all governments need to invest in.

Thanks to these images and our followers on social media, the message has gone round the world reaching countries on all continents, including India, Uganda, Spain, Canada, Columbia and New Zealand.

In the middle of the two weeks of COP more than 1000 cyclists came to Glasgow, some from further afield than the city, to join a mass march.

Huge thanks must go to Pedal on Parliament who organised the Pedal on COP26 feeder rides and the Cycling Bloc at the march – it was fantastic to be there and soak up the atmosphere (and the rain!).

Ahead of the Transport Day at COP, Cycling UK joined with hundreds of other organisations in signing an open letter to government leaders at COP26 calling for cycling to be recognised.

This was reinforced on the day with GoBike organising a peaceful demonstration by cyclists outside the COP26 venue, which received coverage on TV and the media, such as the Guardian’s COP26 picture gallery.

Focus shifts from global to local

By working together with a common message, we were able to secure wording about cycling in the COP transport declaration, but more than that, we succeeded in drawing attention to the role of cycling as a solution to the climate crisis.

We must all now maintain the momentum – we don’t have to wait for world leaders to catch up with improved wording at COP27 next year.

Cities, councils, communities, and citizens can get on with the real work of climate action immediately and start by spending money on cycle lanes and other safe cycling infrastructure.

You can help call for this where you live, now that COP is over. Use our online tool to send a letter to your council’s transport lead (or MLA in Northern Ireland) and ask them what they're doing to enable more people to cycle and reduce transport emissions.

We are also starting to plan for local elections in May 2022 in England, Scotland and Wales, and Assembly elections in Northern Ireland, when we will be campaigning for councils to get on with the job of creating safe cycle space on our local roads.

Look out for more information about our election campaign plans – you can also join our growing network of cycle champions to receive information the Cycling Advocacy Network resources, upcoming events, and campaign action suggestions that will help you build and maintain momentum locally.

We are stronger and more effective for cycling when we work together – lets keep the momentum going.

Join us and use our online tool to send a letter to your council’s transport lead (or MLA in Northern Ireland) and ask them what they're doing to enable more people to cycle and reduce transport emissions.