The letter organised by the European Cycling Federation says the world needs much more cycling if we are to combat climate change and has been signed by over 250 organisations so far.

With COP26 in its second week, attention turns to how to decarbonise transport on Wednesday’s Transport Day at COP, where delegates and the media will focus on ways to reduce emissions from how people travel.

COP26 organisers have received criticism for a narrow agenda for transport concentrating on electric vehicles and charging infrastructure to the exclusion of policies to increase active travel and public transport.

In the UK, the transport sector is the largest source of climate emissions, accounting for 27% of the UK total.

Furthermore, since 1990, emissions from transport have reduced more slowly than other sectors with only a 5% reduction over three decades.

The open letter explains to the world’s governments that road vehicles account for nearly three quarters of transport CO₂ emissions, and that these numbers are not decreasing.

As a solution to the climate emergency, the letter recommends that ‘cycling represents one of humanity’s greatest hopes for a shift towards a zero-carbon future’.

Switching from a car to a bicycle saves 150g of CO₂ per kilometre, and doing this for just one day a week can reduce your carbon footprint by about half a tonne of CO₂ over a year.

Daily cycling is better still for the planet and can cut more carbon per day than loft insulation or switching to a renewable energy supplier. 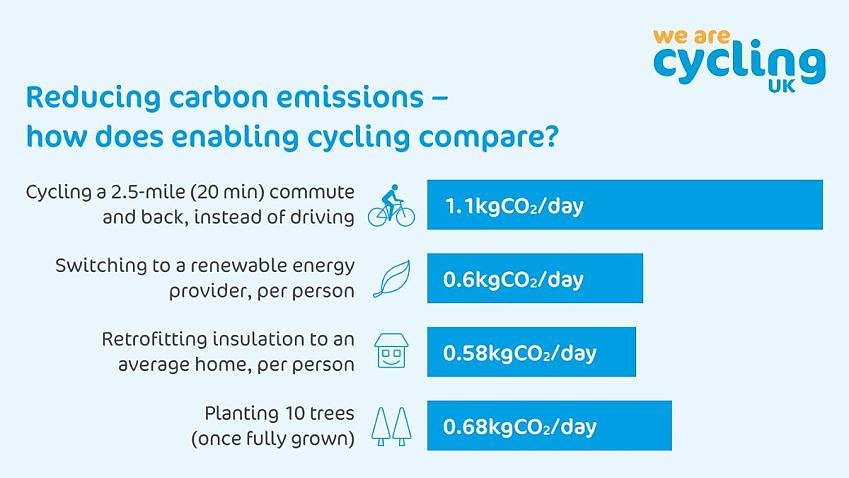 Speaking at the COP26 conference in Glasgow Sir Patrick Vallance, the UK Government’s Chief Scientific Adviser, warned that climate change is a far bigger and potentially deadlier problem than coronavirus.

Explaining the need for governments to combat global warming and help people make changes to their everyday lives he said, “If the green choice becomes the easy one, more people will be willing to change their behaviour.”

Jim Densham, Cycling UK’s campaigns and policy manager in Scotland said "It is scandalous that cycling is not on the agenda at COP26 when only 18% of the world’s population owns a car.

"Cycling is a realistic option for far more people across the globe, is better for the climate, and delivers far-reaching additional benefits such as improved health.

"It’s time for national and local governments to be bold and deliver a vision where cycling is at the heart of plans to decarbonise transport.

"Government leaders at COP26 must agree to politically and financially invest in the safer and integrated cycling that is equitable for everyone.

"Whilst the message is global, the changes we need to enable more people to cycle have to happen locally and every council needs to step up and create a network of safe cycling infrastructure in our communities."

Cycling UK has created an online tool to enable members and supporters to write to their council's cabinet member for transport (or MLAs in Northern Ireland) and ask what they're doing to be part of the climate solution by enabling more people to cycle and reduce transport emissions.

Anyone in the UK can use the tool to ensure that this message about the need for local action gets directly to their council’s senior transport decision-maker.

Add your voice - write to your council

For those keen to keep the up pressure and momentum, Cycling UK’s Cycle Advocacy Network (CAN) has opportunities for anyone to get involved and join a movement dedicated to securing local change.