The COP26 climate summit is being hosted in Glasgow in November. Jim Densham, Cycling UK campaigns and policy manager in Scotland, explains why and how we are supporting cyclists to take part in a day of global action.

At the beginning of November, the world’s attention will be on Glasgow as world leaders descend upon the city for the UN COP26 climate summit.

Their task is to agree the next phase of action to build on the landmark Paris Agreement in 2015, which set targets to limit global heating and climate chaos.

There is desperate hope for a new accord in Glasgow which sets a concrete and binding plan of action for all countries to meet those targets.

It’s difficult to dwell on the impacts of a changing climate without it affecting you.

Before joining Cycling UK I used to work on climate change issues for a conservation charity and I had times when it made me very anxious, depressed and utterly powerless.

The evidence shows that without urgent action the future for humanity and many of the species we share our planet with looks extremely scary and bleak.

One of the rays of hope in the role was talking to the public because people understand that climate change harms nature.

The vast majority of people (84%) in Scotland are concerned about climate change, a figure which rises to 96% among young people.

Knowing what to do about such a huge problem, however, is more challenging.

The information on which actions are actually beneficial can be confusing and our individual actions often seem so puny in comparison to the size of the problem.

That’s why we urgently need world leaders at COP26 in Glasgow to agree the actions that all nations and all people can take together as a global community.

On 6 November we have a unique opportunity to loudly and clearly tell the gathered global leaders how important it is to reach a historic deal in Glasgow.

The role of cycling

One clear cut solution to the climate crisis is cycling – zero carbon and an assured way of reducing your carbon footprint.

It’s easy for people to understand this compared, for example, with the nuances of choosing climate friendly foods in the supermarket.

Riding a bike is also something that most people could do as part of their everyday lives.

Even riding an e-bike creates a tiny amount of climate emissions (from electricity generation) compared to using a car.

Thankfully surveys show that three quarters of people in Scotland would be able and willing to reduce the amount they personally travel by car and 29% expect to cycle more than they did before the pandemic.

It’s now up to the Scottish Government to lead the way and make cycling and low carbon transport easier, safer and a realistic alternative to driving a car, especially for short everyday journeys.

In November we have a unique opportunity to loudly and clearly tell the gathered global leaders how important it is to reach a historic deal in Glasgow.

Tens if not hundreds of thousands of people will march together in Glasgow on 6 November to join millions of others in a day of global action.

Cycling UK is supporting campaign group Pedal on Parliament to organise and promote a Cycling Bloc as part of the mass march in Glasgow on 6 November and feeder rides from all corners of the city and further afield.

We are also supporting groups who want to run Mini-Pedal on COP activities in other towns and cities in Scotland and around the UK. 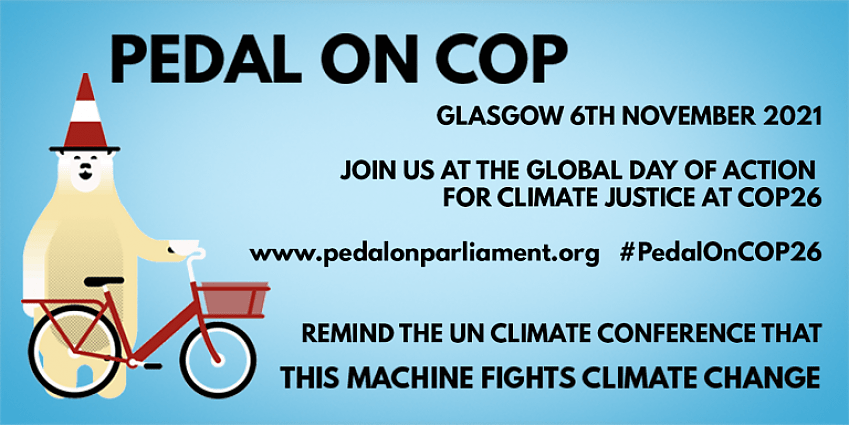 We are no longer calling for governments to think about future actions or the next generation – we need action immediately, for us and our children – the future is too late.

Global heating and a chaotic climate is here now and only set to get worse unless the global community acts together.

Cycling is part of the solution – join us to tell governments that ‘this machine fights climate change’.

Get involved on 6 November

Keep an eye on Pedal on Parliament’s website to see what’s happening near you as plans are being developed all the time.

We will also be providing more information on how you can make your voice heard, even if you can’t come to Glasgow or be part of another event.

If you are part of a group who wants to get involved, please email me at campaigns@cyclinguk.org.

What could an SNP-Greens deal mean for cycling in Scotland? View

Cycle Campaigning View
Cycling UK continues to support the UK to cycle
This remains true during this difficult period with the ongoing threat of coronavirus Covid-19
Read our latest advice on cycling
Join Cycling UK to help us change lives and communities through cycling
Membership gives you peace of mind insurance, discounts in cycle shops, rides & routes
Join now