Why I fell in love with cycling in Scotland

Why I fell in love with cycling in Scotland

Bikepacking became Markus Stitz's passion, while riding his bike he fell in love with the people, landscape and culture of Scotland.

"Never again.” My words left no doubt that the last night hadn’t been a pleasant experience. Martin, a close friend and buddy for my first bikepacking trip, was sitting next to me, not really knowing how to motivate me to get back on the bike. Camped somewhere in the Carron Valley, I was dragging myself through deep grass to my bike, sore, while dripping over an half-empty Guinness can. That morning in the summer of 2006 it didn’t feel like cycling in Scotland was something I would grow to love.

When we left Edinburgh the day before, on 26-inch hardtail bikes loaded with 13kg packs on our back, our aim was to make it to Loch Lomond. The West Highland Way would be the first highlight on our tightly planned schedule of all the places in Scotland that had caught our attention. It was the Scotland I knew from Lonely Planet’s ‘Scotland’s Highlands & Islands’. At the time I had a highly romanticised version of the real Scotland, with blue skies, sandy beaches and whisky barrels. What I discovered in the years that followed was a place of depth and distinction.

I came to Edinburgh because of my love for music and the arts, but I stayed for Scotland’s generous access rights and the excellent cycling opportunities those offer. Before settling here permanently in 2009, I spent four summers working for the Fringe festival. Each year I combined the partying and boozing with cycling trips thereafter. In year one, 2005, my biggest achievement was to ride the black route in Glentress on my hardtail, cycling there and back from Edinburgh. The next year I went on my first bikepacking adventure. The year after I cycled to the Mountain Bike World Championships in Fort William and toured the Hebrides and the north of Scotland, on what is now the North Coast 500, with panniers. And in 2008 tackled the more rockier routes of the Cairngorm Mountains on a full suspension bike.

I learned the hard craft of cycle touring in my time in New Zealand, but it was Scotland where I perfected it. New Zealand introduced me to the Kennett Brothers and their excellent mountain bike guidebooks. It also reminded me of my current home, and often did I hear me saying “this looks just like Scotland.” It was like Scotland on steroids, with higher mountains, more wind and more rain. But it was too far away from my family in Germany, and had none of the generous access rights I enjoy here. It had sandflies instead of midges, and to this day I am still deciding which are worse. But in the end Scotland trumped over New Zealand. 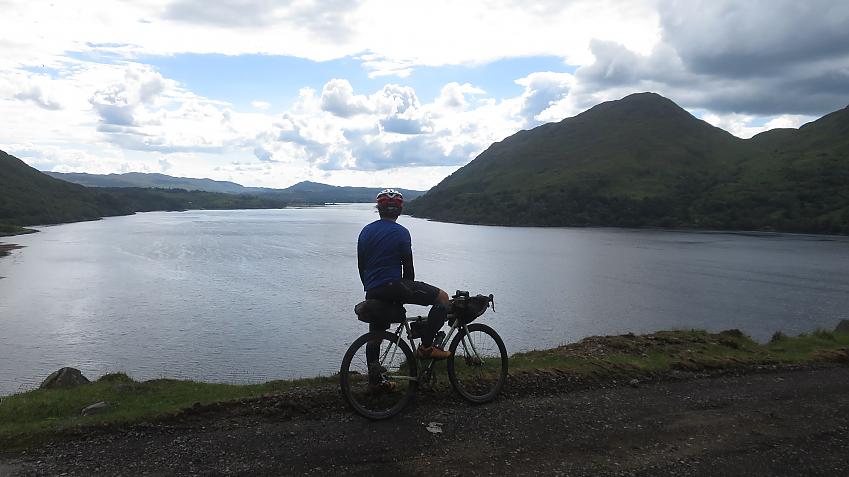 In 2009 I returned to Scotland, but this time for good. I started working at the Edinburgh International Festival in the year it celebrated not only the Scottish Enlightenment, but also the splendour of the Scottish landscape. My love affair with Scotland had been burning on a small flame before, but it was really ignited that year when I watched ‘St Kilda - Island of the Birdmen’.

St Kilda is the UK’s only dual world heritage site, both a natural and cultural world heritage site. For me visiting the island is the ultimate adventure in Scotland, and it might always be that, as it’s the most inaccessible place for me to reach. My sailing skills are non-existent and I get seasick from even looking at boats, so it might always be just a dream. But we need dreams in our lives, something to aspire to, and St Kilda stands exemplary for the wealth of opportunities to explore in Scotland, combining the rich natural and cultural heritage.

Little did I know on my first night of camping in Scotland in 2006 that ten years later I would finish the biggest adventure of my lifetime not far away from that soggy patch of grass, in Scotland. When I returned to Portobello Beach in Edinburgh in the last week of the Fringe, after 34,000 km across four continents on a singlespeed mountain bike, I was ready to try to follow in the footsteps of the Kenneth Brothers, who I finally met in person on my round the world trip. I looked back on great memories, but equally forward to combine my professional background, marketing, and my passion, cycling, to encourage people to get on their bikes. With such a rich natural and cultural heritage, Scotland provided the perfect place, and so Bikepacking Scotland was born.

For me Scotland offers a vast pool of inspiration for adventures.

For me Scotland offers a vast pool of inspiration for adventures. The ancient network of drove roads, as vividly described by Haldane in ‘The Drove Roads of Scotland’, a network of bothies, portrayed by Allan in the ‘Bothy Bible’, hidden ways and wild places, brought alive recently by Moffat in ‘The Hidden Ways’ and Baker in ‘The Unremembered Places’, and a vast network of hill tracks and military roads, cared for and described by the Scottish Rights of Way Society in ‘Scottish Hill Tracks’ and the Heritage Paths website - there is sheer endless inspiration for microadventures or trips of a lifetime.

It’s not the country from the Lonely Planet perspective, it’s the Scotland from the tales and stories of its friendly people I am most interested in. When I cycled around the world, I carried a few printed photographs with me, so I could tell people more about my life. If they didn’t understand either English or German, those pictures spoke a universal language. Amongst the pictures of my parents, my siblings and the village I was brought up in Germany is a picture of me on the harbour railing in Tobermory, looking at the beautifully coloured houses on the Isle of Mull in Argyll.

It’s the Scotland off the beaten trail, a country that offers a feast for the senses and the vast open spaces to dream, which I am most interested in. Other people’s stories have paved the path for my own adventures and the routes I have curated for Bikepacking Scotland, but they are merely prescriptive. The routes are an encouragement to offer people my idea of a Scotland off the beaten trail, which doesn’t feature in most guidebooks, but has provided me with memories of a lifetime. Very few times I have said “never again” since that first night wild camping. My love for the country has grown from a small spark to a roaring fire. The one that warms my heart and soul on a cold and dreich winter’s day, in Scotland.

Markus Stitz is an Edinburgh-based writer, filmmaker and photographer, and the founder of Bikepacking Scotland. He is the first person to circumnavigate the world on a singlespeed bike.

Explore Your Boundaries by bike View

Rural and remote areas to get a helping hand to walk, wheel and cycle more View