Day one, not far from Thurso. Maggie (left), Jane (right)

The North Coast 500 is a spectacular journey through Scotland, as 74-year-old Maggie Fallon and her 70-year-old friend Jane discovered

We were at Bristol Airport with our bikes in boxes: the day we’d been looking forward to and dreading in equal measure had arrived. We were off to Thurso via Inverness to ride the North Coast 500.

From Thurso we would be heading west along the coast, our route and overnight stops taking into account the hills we would encounter. Most days we’d ride about 40 miles. Each evening, Jane would update our blog so that friends and family could follow our progress and our children (and grandchildren!) could be reassured we were alive.

Looking at the blog now, we were clearly running out of superlatives to describe the scenery after the first couple of days. There’s also a sense of relief there, because we were finally embarking on our much-anticipated adventure. We know, however, that we are fortunate to be fit and optimistic enough to tackle such a trip at our ages.

We did do some preparation. Jane insisted that instead of our usual twice-weekly rides we should concentrate on cycling up our local hills, sometimes several times in a morning. In the weeks before we set off, we were doing the hills with 3kg of stones in our panniers. That was Jane’s idea too!

I was grateful for this extra training when we were cycling through Borgie, Durness, Scourie and then down to Ullapool. I was able to stay on my bike throughout instead of dismounting to ‘admire the scenery’.

The weather was mostly good and the bothersome traffic we’d heard about seldom materialised. There were many campervans waiting in the passing places, but the occupants were patient and often cheered when they realised how old we were. The motorcyclists were also friendly. Only the high-performance sports cars roaring past made me mutter dark thoughts. 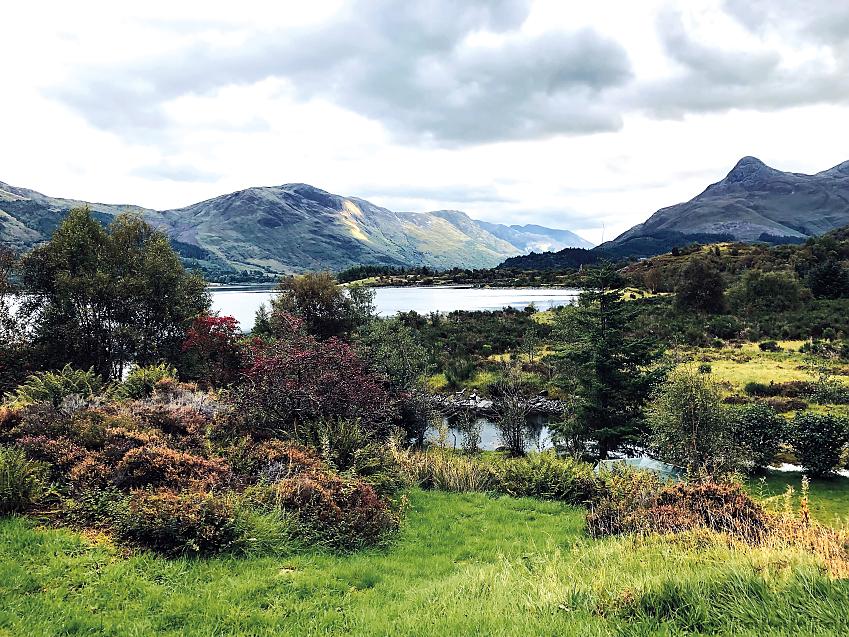 View from Ballachulish B&B including the Pap of Glencoe

After we passed Ullapool and Loch Broom, the weather deteriorated for a few days. We still enjoyed cycling past the mountains, despite the wind and rain. Yet we were daunted by the thought of riding around the Applecross Peninsula and over the summit of Bealach na Ba in the face of what the forecast said would be 40mph southerly winds. The prevailing wind direction is why most cyclists ride the NC500 clockwise: the wind will be at their backs up the west coast. We, on the other hand, were heading straight into it.

As soon as we reached the peninsula, the wind strengthened. Mostly a headwind, there were also gusts from the side. At one point Jane was blown right across the road. While Jane felt safe cycling, I preferred to walk for a while; I’d reach Applecross eventually. ‘Breathtaking scenery’ took on a whole new meaning that day. We limited ourselves to one glass of wine that night, thinking of the next day’s climb over Bealach na Ba.

By tackling ‘the Ba’ from the north instead of the south, we were taking the easier route. Drizzle and low cloud greeted us as we left our accommodation, and it continued throughout the day. We winched our way up, managing the gradient and grateful for our training. As we had started out so early, there was little traffic on the singletrack road.

Gradually Jane pulled away. I lost sight of her as we ascended into the cloud. I checked my elevation when I first stopped and was pleased to see 400 metres. Only 200 to go! Visibility became very limited and I was grateful we had invested in highly visible and expensive waterproof jackets, and had as many lights on our bikes as we could muster.

Eventually I saw Jane standing at the top, jumping up and down with excitement. I had carried a can of fizzy Pinot Grigio to celebrate the moment but my hands were so cold it was impossible to open. We toasted our success with a mouthful of coffee.

We then started the long descent through the hairpins, which was wonderful but led us to become so cold we could hardly hold onto the handlebars. By the time we reached the café at the junction of the main road, we were both close to hypothermic. It took an hour plus hot chocolate and soup for us to stop shivering. But we had big smiles on our faces. We’d done it!

There was a danger that the rest of the holiday could be an anticlimax. We were leaving the NC500 and working our way south to Glasgow to catch a train home. As route planner, however, I was able to arrange to visit one of my favourite places: Glencoe. So that’s where we headed next, enjoying the route past the Five Sisters of Kintail where the road is engulfed by the surrounding Munros.

We were also able to revisit the haunting Commando Memorial near Spean Bridge. Our progress through Glencoe was as steady as the drizzle, which became heavier through the morning. Along with an increase in traffic, this made our progress to Crianlarich slow and hard. The Green Welly Stop at Tyndrum was a beacon of light in a dark afternoon.

That evening was the first time either of us was willing to admit we were tired. Maybe it was the thought of only one more day of cycling. Maybe it was the cans of gin and tonic we had bought at the Green Welly Stop and had drunk. More likely it was both of these plus the soak in the bath that our hosts always offered to cyclists.

We decided to catch a train to Glasgow the following day instead of cycling there – a decision we were grateful for when we saw the rain at breakfast. Our last night’s accommodation was in Dumbarton so we backtracked after disembarking in Glasgow. Next morning we made the 14-mile trip along the cycle path in the other direction, reaching the station for the first of four trains home.

It was the most wonderful cycling tour we could have done. We worried about it, trained for it, and applied all our organising skills in preparing for it. Most of all we wanted to show that women of our ages can set challenges – in fact, must set challenges – and with advice and careful thought can see them through. 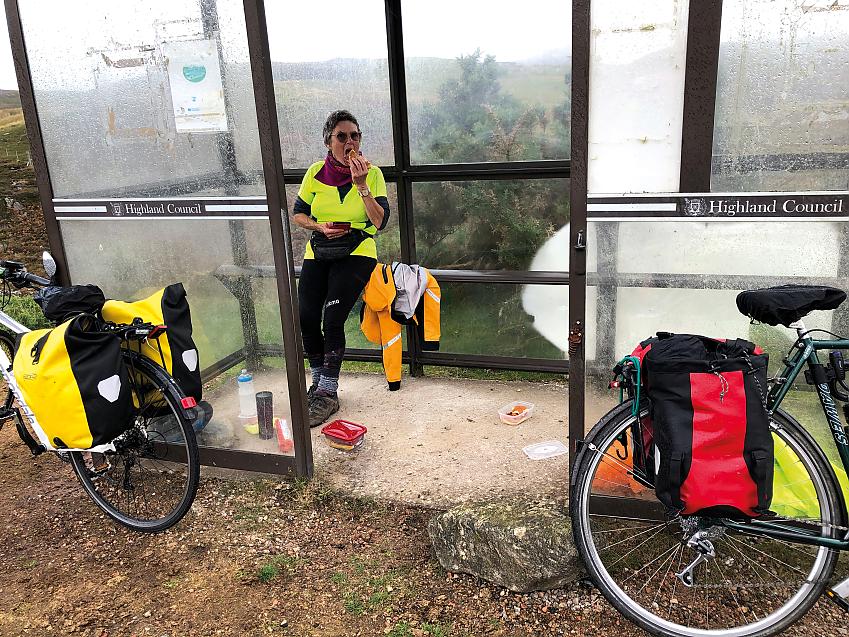 Do it yourself: Logistics

We flew to Inverness then took a train to Thurso. The bikes were in boxes for the flight so my son took us to the airport. Without his help, we’d have hired a van. Coming home, we took the train all the way from Glasgow to Keynsham, changing at Preston, Birmingham New Street, and Bristol Temple Meads. The bikes were booked on the first three legs with no trouble. At Bristol we managed to cram our bikes on with many others. Total cost of the trip was £1,040 each, including all accommodation, travelling, food, etc. We used senior railcards and shared twin rooms.

Conditions: Great weather along the north coast, deteriorating as we came south on the west coast. Strong winds on Applecross Peninsula. Roads and traffic were easily manageable.

Equipment: Dawes Galaxy circa 1990 (Maggie), Cannondale road bike (Jane). Ortileb panniers – I used front ones on the back to prevent taking too much.

Maps & guides: Cicerone Cycle Touring in Northern Scotland, pages out of a road atlas, OS map of Glasgow for the cycle path.

Next time I would… Look at the best time of year to visit the area. September, when we went, has double the rainfall of May in NW Scotland…

Half a North Coast 500 View