When his dad’s 40-year-old bike was headed for the dump, Euan brought it back to life thanks to the Scotland Cycle Repair Scheme. Now it’s helping him keep fit during the coronavirus crisis

Euan Martin, 28, enjoyed cycling as a teenager but hadn’t done much since moving away from the family home to attend university.

Working from home in his role as production co-ordinator for a whisky company since March due to the coronavirus crisis, he started to think about ways to maintain his fitness, especially with the football games he enjoyed playing in being cancelled.

He hadn’t given much thought to the vintage Raleigh bike lying unloved in the shed until his mum, who works for the NHS, mentioned receiving an email about the Scotland Cycle Repair Scheme.

The Scotland Cycle Repair Scheme is funded by the Scottish government and administered by Cycling UK. It provides up to £50 of free servicing and repairs at over 290 participating bike shops across Scotland. The scheme is aimed at bringing old bikes back to life and encouraging as many people to cycle as possible.

“My dad was in the process of clearing out the shed when we rediscovered his old bike. It had been in there for 15 years without being used. He bought it second hand from a friend or colleague years ago when he got into cycling, so it’s from the 1980s or maybe even 1970s!”

Without the scheme, it’s most likely that the bike would have ended up in landfill, so it was a huge help and gave me the push I needed to get it done

Recognising an opportunity to get back into cycling after a long gap, Euan took the bike to the Bike Barn in Strathaven, the nearest participating shop to his home in Lanark.

The bike was in poor condition, with perished tyres, no working brakes or gears and covered in years’ worth of dust and cobwebs.

Amazingly, the steel frame was free of rust even after so many years, which made it easier for the Bike Barn to restore it to its former glory. In fact, they were so impressed by the beautiful vintage road bike that emerged from under the dust that they were reluctant to return it to its owner!

Euan wasted no time in putting the newly restored bike to the test in his local area, enjoying rides through the back streets of Lanark and the scenic Clyde Valley.

“It felt good to be back on the bike, having not done it for a while,” he says. “I’ve been doing short local rides to get back in the swing of things, but it’s hilly around here, so can be challenging.” 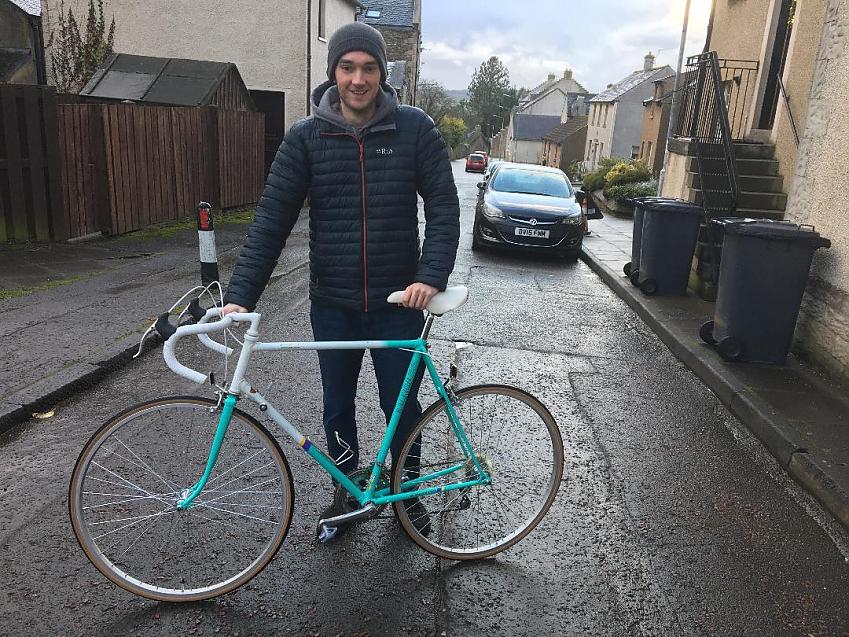 Euan and his bike

Speaking of challenges, Euan is hoping to take the bike to visit his mother’s family in the Outer Hebrides at some point in the future.

“It’s quite flat there which is nice, but the downside is that it’s always windy!”

Euan is very grateful to the Scotland Cycle Repair scheme for getting both him and his dad’s old bike back on the road when it came so close to being binned.

“Without the scheme, it’s most likely that the bike would have ended up in landfill, so it was a huge help and gave me the push I needed to get it done.”