Resting in the grass near Dirleton
By Markus Stitz
Wednesday, 7 April 2021

A fantastic introduction to bikepacking in Scotland, Markus Stitz explored everything the John Muir Way has to offer

I’ll be upfront at the start. I have cycled the John Muir Way. But I cycled it in stages. I guess for all of us 2020 was an unexpected year, with many plans made and few of them actually happening. As the world adapted to coronavirus, I had to do the same. When I was approached by Gavin Morton from the Green Action Trust, who manage the John Muir Way, my original plan was to cycle it as a continuous bikepacking journey, and document the experience in a film.

I have used the same approach previously, first for the Wild About Argyll Trail in 2017, which, like the John Muir Way, starts and finishes in Helensburgh. Afterwards, I developed the Go East Lothian Trail in 2018, which starts and finishes in North Berwick and includes my favourite section of the John Muir Way - Craigmoor Wood. After a rather long break behind the camera I documented my journey through the Tian Shan in Kyrgyzstan in 2019 on an iPhone. ‘No Stone Unturned’ ignited the filmmaking spark once again and laid the foundation for producing three films in 2020: ‘Distance’, ‘Drovers’ and ‘Unhurried’.

When lockdown was announced last March, it was as much unknown territory for me as for everyone around the world. I returned from the Atlas Mountain Race at the end of February, and used my time wisely to test ride a network of new gravel trails and a bikepacking route between Rannoch Station in the north and Crieff in the south, named the Highland Perthshire Gravel Trails.

When lockdown commenced, one of my first local rides included a beautiful section of the John Muir Way from South Queensferry to Edinburgh. Once the restrictions were eased in Scotland, I pitched my tent a short ten miles away from home on a beach close to Hound Point, looking in awe at the beautiful trio of Forth Road Bridge, Forth Rail Bridge and Queensferry Crossing. Instead of one continuous journey, I did multiple day trips on the John Muir Way that summer instead.

We were exploring not only the John Muir Way, but also the surroundings, like Gosford Gardens and Policies, which hosts a fine example of a curling house and neoclassical Gosford House (but sadly doesn’t allow cycling, so bring a lock and enjoy a walk). On a final trip in September, I slept under the stars in the forest close to Burncrooks Reservoir, completing the last section from Balloch to Strathblane, but in the opposite direction. 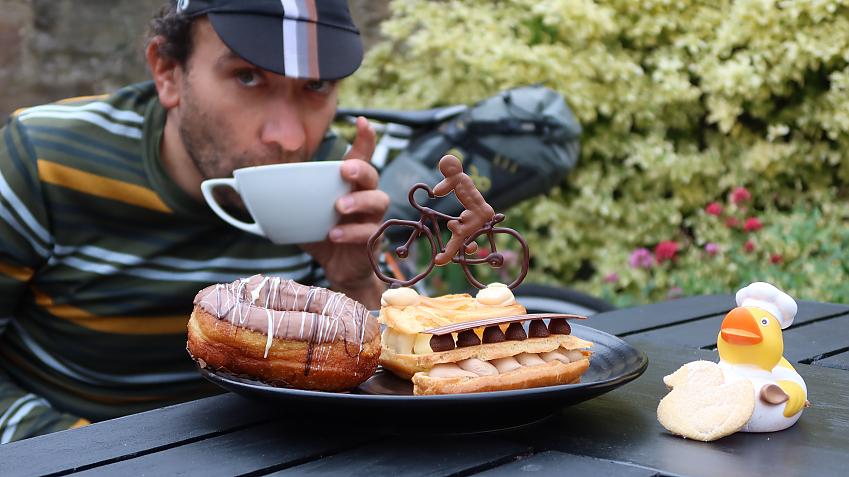 I have cycled parts of the route, especially near my hometown Edinburgh, multiple times. I haven’t got bored of it, as the beauty of the John Muir Way lies in its versatility. Stretching 212 km from Helensburgh on the west to Dunbar on the east coast of Scotland, the route, one of Scotland’s Great Trails, can be cycled or walked as a continuous journey, or enjoyed in multiple short trips. With 1800m of ascent it’s a comparatively flat route for Scottish standards. I had planned 3 days to cycle the route and document it.

For easy access there are enough train stations along the route to break it up or take shortcuts. All but one (Dunbar) won’t require bike reservations in advance. Dunbar is well connected with trains to London and Edinburgh, and there are very frequent services to Helensburgh from both Edinburgh and Glasgow. Due to the prevailing wind direction (south west) the John Muir Way is best cycled from west to east, arriving at John Muir’s birthplace in Dunbar as the final stop. For an onward journey on sturdy bikes, the John Muir Link - a coastal path - connects Dunbar with the Southern Upland Way and the Berwickshire Coastal Path in the Scottish Borders. 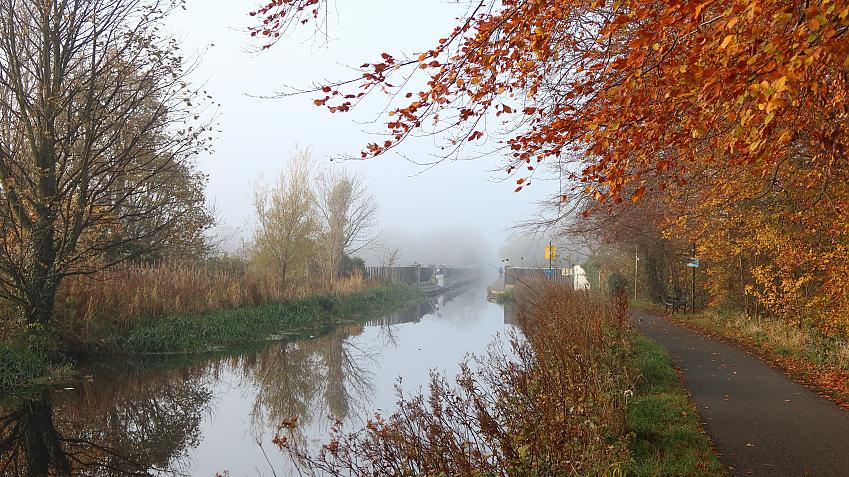 Autumn on the John Muir Way in Edinburgh, which follows the Union Canal at places

The John Muir Way feels remote at times, but it doesn’t climb high. It is a route almost for all seasons, unless snow covers its upper sections (which happens very rarely). The route’s highest points, close to Gouk Hill at Auchendennan Muir and above Burncrooks Reservoir, hover around 270m. High winds can prove a difficulty for cycling, but next to those two hills, the only section that turns into hard work in high winds is from Musselburgh to Dunbar along the East Lothian coast. Woodlands provide shelter if needed.

For me, the route is a perfect introduction to bikepacking. The John Muir Way packs in no less than three of Scotland’s six UNESCO world heritage sites: The Forth Rail Bridge, the Antonine Wall and the New and Old Town of Edinburgh. But it wouldn’t do John Muir justice if there weren’t stretches that feel wild. They allowed me to really reconnect with nature, despite cycling through one of the most populated areas of Scotland.

Cycling is a wonderful mode of transport that allows us to stop pretty much everywhere. As a route, the John Muir Way is an excellent opportunity to slow down and appreciate the little things that happen along the way

Muir, a Mountaineer born in Dunbar, was noted for being an ecological thinker, whose writings became a personal guide into nature for countless individuals. His modern environmental consciousness is his biggest legacy, although comments made about Indigenous peoples in the US, where he is better known than in Scotland, have put his legacy recently into perspective.

I can vividly remember some of those moments where I simply sat down and enjoyed the surroundings around me: sitting outside Balloch Castle, looking west towards Loch Lomond on a calm Sunday evening, watching the stars at Burncrooks Reservoir, leaning my bike against a tree on Hopetoun Estate and looking into the crowns of trees towering over me while listening to the beautiful birdsong, resting under a huge Yew tree in Callendar Woods and reading a book, sitting on the Union Canal with a tasty pizza whilst dipping my shoes into the canal and watching the drops slowly making their way back into the water, or lying in tall grass next to a path near Dirleton whilst imaging the young John Muir running across the field. 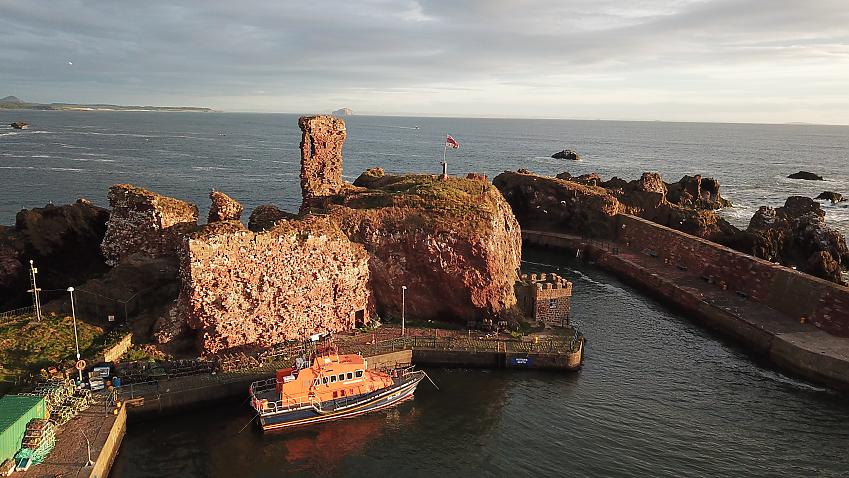 The remains of Dunbar Castle

There were also those moments of awe, when I looked at the man-made architecture and construction that makes the John Muir Way special too: the Falkirk Wheel, the only rotating boat lift of its kind in the world. The Avon Aqueduct, the longest and tallest aqueduct in Scotland. Blackness Castle on the banks of the Firth of Forth, which has been used as a film set for a good reason, and also the Forth Rail Bridge, one of the greatest man-made wonders in Scotland and my favourite bridge in the world.

The cycling along the John Muir Way is perfectly suited for a gravel bike with bikepacking gear attached in bags. There is no real need to carry much food on this trip, as shops and restaurants are frequent. The most remote section from Balloch to Strathblane has no shops or services for about 20 miles. Camping is allowed along the way, thanks to the Scottish Outdoor Access Code, but the route is equally suited for a B&B/hotel trip. 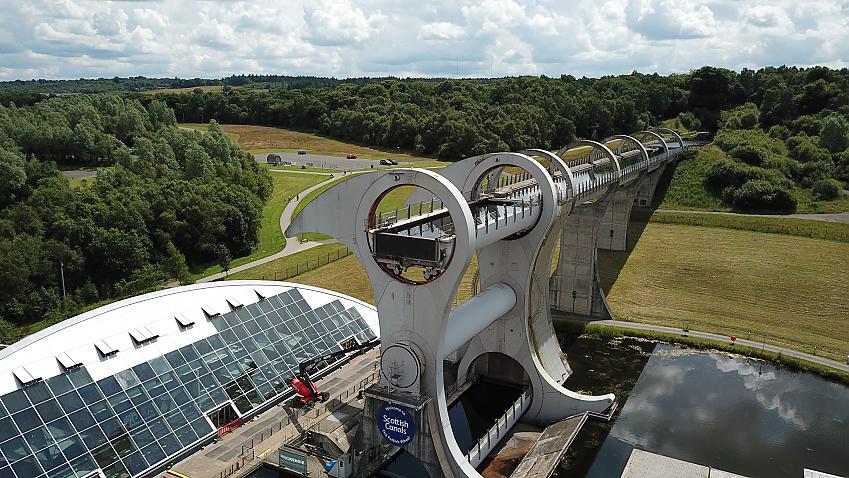 While there are a few very short bits that require attention and riding skills, most of the cycling is on well-graded paths, cycle paths and quiet roads. My favourite sections were the sections in woodlands; Harestanes Wood near Aberlady, Tamfourhill in Falkirk, Wester Shore Wood near Blackness, Craigmoor Wood near East Linton, and my local playground - Corstorphine Hill in Edinburgh.

Signposted all the way, the route is a great introduction to bikepacking when it comes to navigation. A GPS device is a great addition, and requires less concentration while crossing cities like Edinburgh, but it’s not a must-have like on more difficult routes in the Scottish Highlands. I used a Lezyne Mega C, which automatically connects with komoot, an online navigation app I used for plotting the bikepacking route. With a good battery life and free maps it guided me effectively when moving along the way. 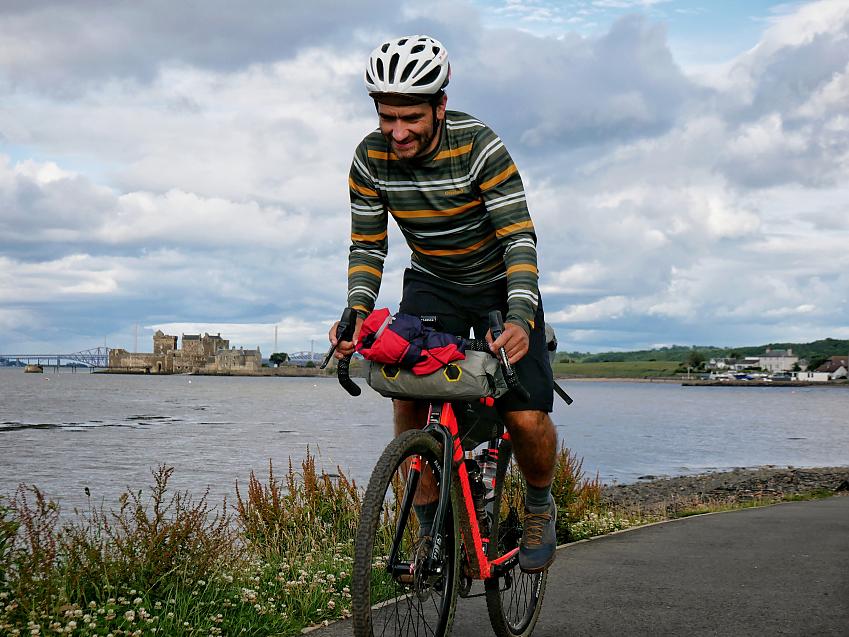 The moments I most remember are those when I stopped. When looking for a title for my new film, I did choose ‘Unhurried’ for a reason. Cycling is a wonderful mode of transport that allows us to stop pretty much everywhere. As a route, the John Muir Way is an excellent opportunity to slow down and appreciate the little things that happen along the way. My journeys along the John Muir Way allowed for watching oystercatchers and gannets playing in the waves, ducks and their ducklings playing on the canals. From cormorans and swans to dragonflies and tiny common frogs - there was as much to keep me occupied off the bike as on the bike.

On my journeys I often remembered one of Muir’s famous quotes: ‘In every walk with nature one receives far more than he seeks.’ In every bike ride, too.

Travel by bike/train/car to Helensburgh, which is well connected to Glasgow and Edinburgh, but also offers free long term parking on the pier. Visit John Muir Way  to find out more about accommodation and sites.

Route: From Helensburgh over Gouk Hill to Balloch on the shores of Loch Lomond, then across Burncrooks Reservoir to Strathblane, on the Strathkelvin Railway Path to Kirkintilloch, on the Forth and Clyde Canal to the Falkirk Wheel, on the Union Canal to Linlithgow, along the Firth of Forth to Edinburgh and along the East Lothian Coast to Dunbar.

Conditions: A mixture of gravel paths, quiet roads, cycle paths and towpaths, with some sections on tracks

I’m glad I had…My Apidura packable backpack, as it allowed me to buy tasty treats like chocolate and a beer for bivvying on Burncrooks Reservoir

Next time I would…Like to enjoy a few more local culinary treats, which was difficult due to lockdown restrictions and some businesses closed

Do I need special kit to try bikepacking? View
Cycling UK continues to support the UK to cycle
This remains true during this difficult period with the ongoing threat of coronavirus Covid-19
Read our latest advice on cycling
Join Cycling UK to help us change lives and communities through cycling
Membership gives you peace of mind insurance, discounts in cycle shops, rides & routes
Join now