Shortly before lockdown changed the world, Markus Stitz took to his singlespeed bike in the inaugural Atlas Mountain Race, Morocco.

As the glowing orange ball vanishes slowly on the horizon for a last time, my finger reaches for the small joystick on my GPS to check my position. I stop for a short while and rest. After relentlessly pushing my bike through ankle-deep sand, I imagine the fresh ocean breeze and smile. My phone is on airplane mode, while my ear plugs rest safely in the side pocket of my shorts. Those are the last minutes of an epic week, and I want to savour them as best as I can.

The final kilometres of the inaugural Atlas Mountain Race are hard, much harder than expected. Throughout the week I was often startled by the technicality of the route. This was not the race on smooth gravel paths that I had expected. It required mountain biking skills and, more crucially, tyres that could withstand the loose and often sharp rocks on endless descents.

Now, almost at the end, I was ready for a few gentle kilometres on smooth tarmac. I cycled past the last shop about 12 kilometres before the finish. But it doesn’t surprise me that it takes me almost two hours for this last stretch. There is no smooth tarmac anywhere in sight. In many ways, pushing my bike along seemingly endless paths filled with sand is a fitting end. 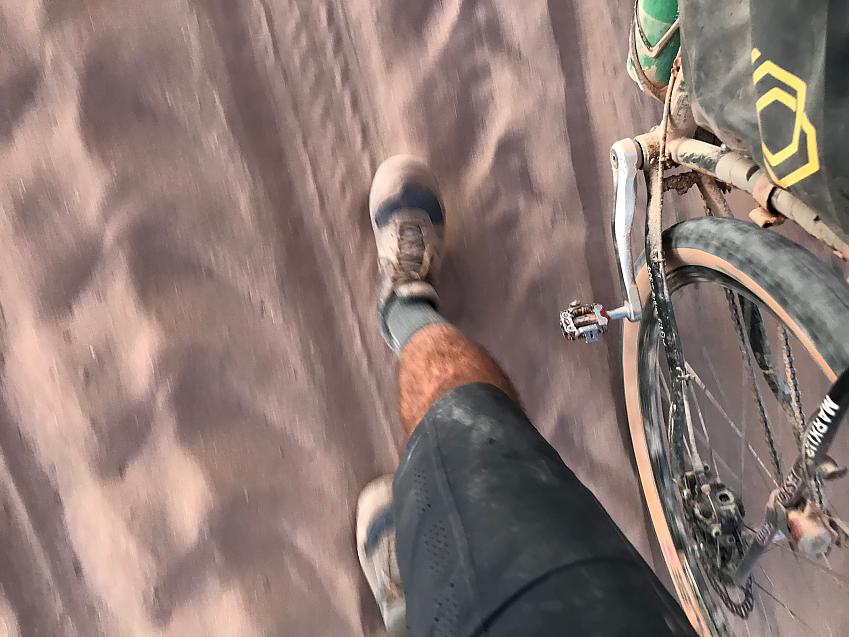 After seven days, eleven hours and twenty minutes I take a final left turn and roll into Hotel La Dune. It’s the evening of the 22 February 2020, a Saturday. The rider’s party is just about to start. More than a hundred riders have gathered outside the hotel on a warm evening in Sidi Rabat, a small resort about 60 kilometres south of Agadir.

The finishers are joined by the people who scratched earlier in the race and have made their own arrangements to get here. Some cycled, some have taken a taxi, some braved the local buses. We are all joined by the race crew, photographers, filmmakers and podcasters.

I look forward to seeing the riders and crew I met along the route to share stories and let the memories sink in. The tranquillity of the last hours is suddenly interrupted by loud cheers. As I stop and rest on my handlebars, someone hands me a cold can of beer. At the age of 40, I have finished a fair few bikepacking races in my life; amongst them the Highland Trail 550 three times, but this welcome party feels more than special. I soak up the atmosphere, finish my beer, park my bike, and go to get my final stamp in the brevet card. 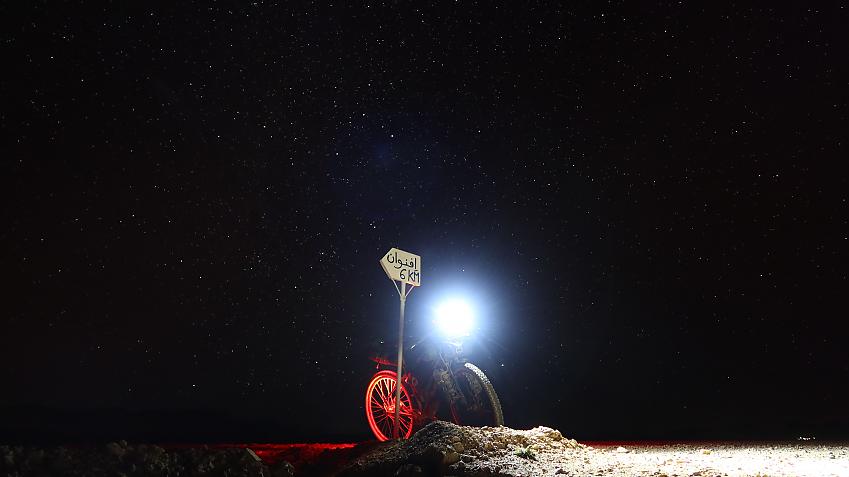 After successfully finishing its sister event, the Silk Road Mountain Race, last August, I am one of 175 starters from around the world, riding solo or in pairs, to attempt the Atlas Mountain Race for the first time. While we will soon be out on our own, the days before the race are great to catch up with old friends, and to make new connections. Bikepacking races are a family affair.

Every race I have done is special, but tackling a route that no one has raced before on a singlespeed bike makes the Atlas Mountain Race stand out. I ride the same bike I used for cycling 34,000 kilometres around the world, across four different continents. The gear ratio is still the same. The only thing I change are the tyres, using a Schwalbe Smart Sam on the front, and a Racing Ralph on the back. 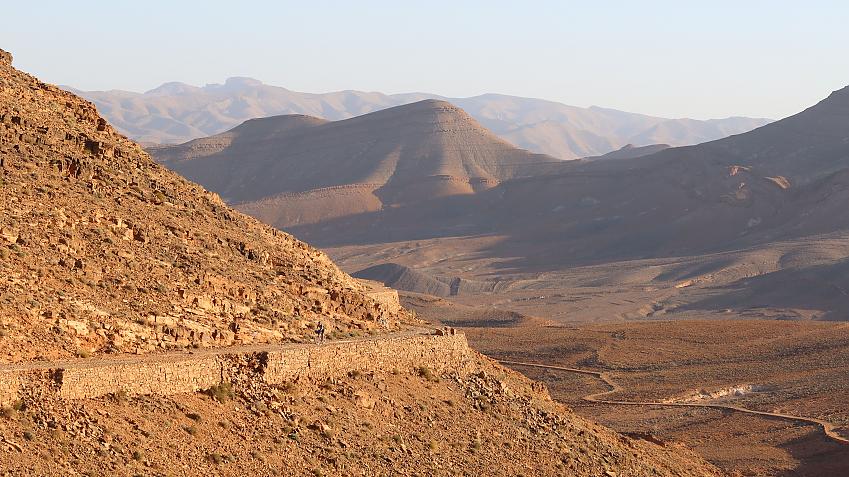 Morocco is my first adventure on the African continent, and February is a great time to visit. The daily temperatures already climb well into the 30s, while the cool nights, especially in the mountains, provide a welcome change. What's missing, is rain; in my fourteen days in the country, I don’t experience a single drop of rain.

After forty kilometres of riding in the darkness, I stop in the middle of the tarmac road and stare into the sky, full of stars. I pause and absorb everything for a few minutes. This race is one of the hardest I have done, but it's moments like this which make all the hard physical riding worthwhile.

We start on the 15 February in Marrakech. Following a set route supplied as a GPX file, and on Komoot, we cross the Atlas and Anti-Atlas Mountains, to finish in the small village of Sidi Rabat on the North Atlantic coast. To get an official finishing time, I have to cycle the route - involving around 17,000 metres of climbing - in less than seven days and fifteen hours. My daily distances range from 119 kilometres on the shortest, to 184 kilometres on the longest day.

With more than 3,000 metres of climbing, day one is the toughest day, especially on a singlespeed bike. I’m tired when I reach the first checkpoint at half past ten in the evening. Along the route there are three mandatory checkpoints, all at small Auberges, where each rider collects a stamp in a brevet card. The checkpoints are manned by volunteers, and stay open 24 hours. Cut-off times for reaching them are set in the race manual and provide helpful guidance to structure my race. 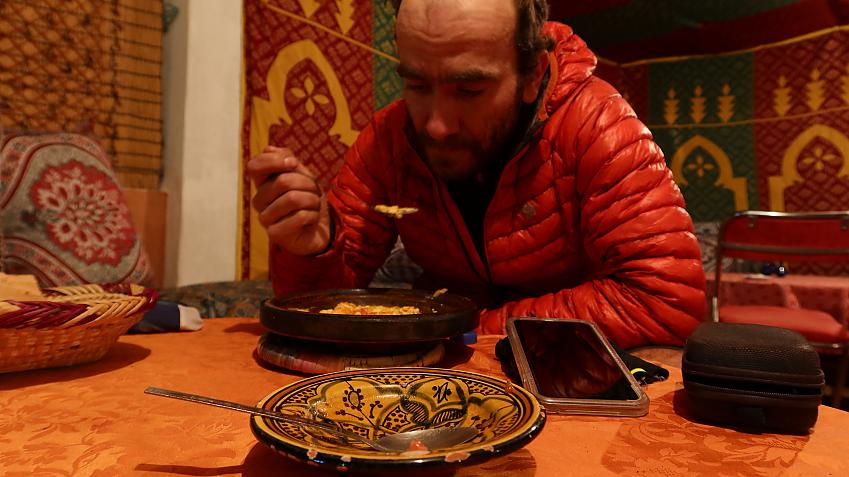 The route of the Atlas Mountain Race is nothing short of spectacular. After leaving the city boundaries of Marrakech, Telouet Pass is the highest point of the route, at around 2600 metres. On day one I reach the pass just before sunset. Taking some time to rest, I admire the breathtaking mountains before braving my first hike-a-bike section down a gnarly mule track in the dark. Having undergone surgery on my right shoulder last September I’m relieved that I get to eat my first omelette (with many more to come) at Checkpoint 1 without any pain. The only thing that troubles me is a cold, which is to stay with me for the rest of the race.

The second day starts at 5am. After the strenuous climbing and descending the day before, a short stretch of empty tarmac is a welcome warm-up, before I enter a small red earth village. Only the prayers of the muezzin from the mosque break the silence, while I navigate my way through a network of narrow paths and onto a massive plateau. At the end of day two, I catch-up with a bunch of riders in a small local cafe in Imassine, before pitching my tent under a star-lit sky. While it had been discussed widely in the race’s Facebook group beforehand, the only big river crossing is an easy affair, even in darkness. 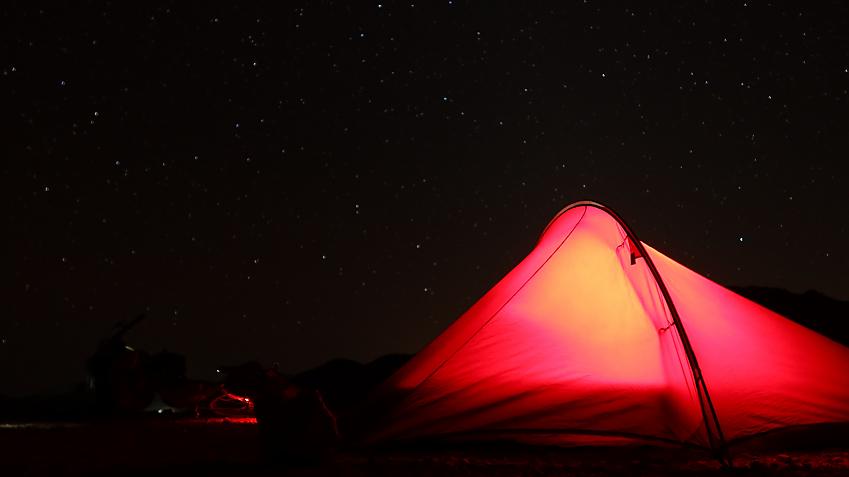 I am concerned about the lack of water on day three. With 80 kilometres to go from my campsite to the next small shop, I have underestimated the heat during the day. The route gets much more remote as I head into the wilderness of the Anti-Atlas. The lack of water is evident, all riverbeds are dried up, and with about 20 kilometres still to go, my three litres of water are gone. With luck on my side, I find an almost full bottle dropped by another rider while I descend an old colonial piste through a network of canyons on my way to Afra.

The key moment of the race comes on day four. After another long and remote stretch, I make it into the first bigger town on the route, Taznakht, shortly before the sunset. While having a pizza in town is very tempting, I resist, and get food from a small store and carry on. After forty kilometres of riding in the darkness, I stop in the middle of the tarmac road and stare into the sky, full of stars. I pause and absorb everything for a few minutes.

This race is one of the hardest I have done, but it's moments like this which make all the hard physical riding worthwhile. No cars pass me. I have the next twenty kilometres of tarmac all by myself, listening to classical music and enjoying the emptiness. To my surprise a small shop is still open at half past ten. Sitting next to a Foosball table, I order an omelette, while every man and boy from the village seem to be out watching the real game on television. A cat offers me company while I enjoy my berber tea and a strong coffee. I continue on, riding for a bit longer until midnight, spending the night in an abandoned house. 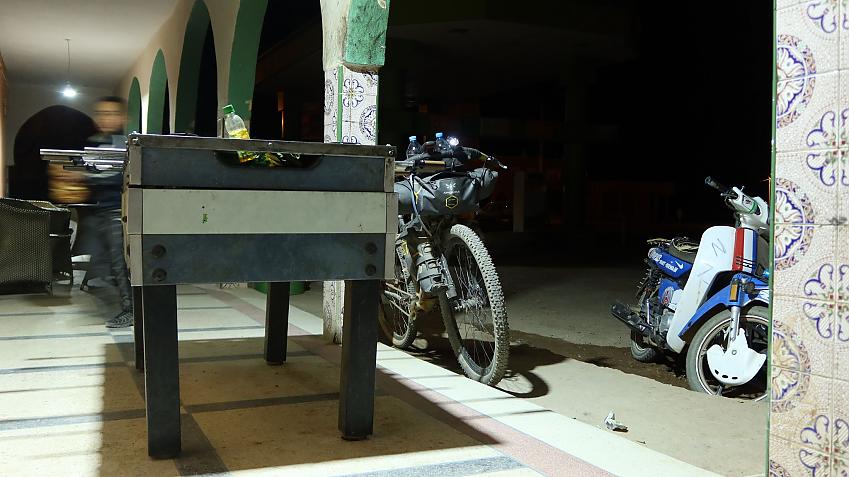 The nightshift saves my race. After an unexpectedly hard 125 kilometres the next day, I reach the checkpoint only two hours before the cut-off time, and treat myself to a bed for the first time since Marrakech. With an early start at 4.30am, I manage to ride 184 kilometres on day six, my longest day by far. The gradient of the old colonial piste between Tagmount and Issafen - built by hand - is just right on my singlespeed. While enjoying the magnificent scenery, I play catch up with Neil - another rider, while the sun paints the rugged sandy gorge in a warm orange. The descent into Issafen is long and rocky at stages. Arriving late in the evening, Neil and I get offered an empty room above the small restaurant in town, where we charge our batteries and listen to barking dogs all night.

Arriving at Checkpoint 3 in the late afternoon of day seven, I have won a bit more time again. I am four hours ahead of the cut-off, and while I could take a longer break, I only allow a few minutes for a quick chat with the volunteers. Tafraoute, one of the bigger settlements on the route, is only 55 kilometres away and a good stop for dinner. Pizza and ice cream provide a very welcome change from the daily diet of omelette, bread and dates. After Tafraoute, the road climbs steeply up to 1200 metres. Once I reach the summit, I find my final overnight stop a few metres down a dirt track, and admire the star lit sky. I pull another early start to cycle the remaining 141 kilometres to the finish line. 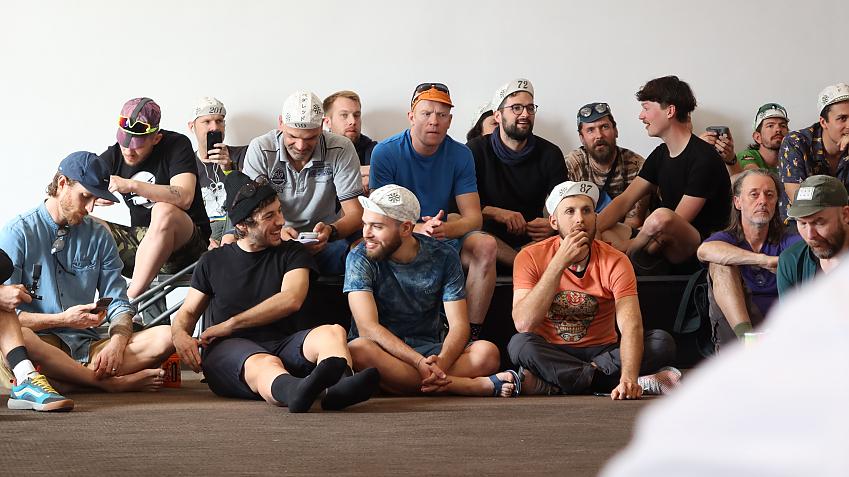 The next morning, I walk through an empty village. Moroccans are not early risers, and although I had a few beers the night before, I still wake up before the sunrise. I go outside and listen to the waves crashing into the shore of the Atlantic Ocean. In the distance, a muezzin sings his morning prayer. My smiling face is gently warmed up by the first rays of sunshine.

While racing the Atlas Mountain Race on a singlespeed was undoubtedly hard, I hadn’t totally squeezed my body. I could still smile. I have found the right balance between riding my bike, experiencing my surroundings and enjoying the social environment of a race. While the sun rises, I look back to a wonderful week and dream of the next race.

I’m glad I had... My two Apidura food pouches. I wasn’t planning on buying 1.5 litre water bottles from the shops, but since there was no water to be found in rivers, those pouches were essential to firmly hold two 1.5l litre bottles, getting me from shop to shop.

Next time I would…Take a lightweight bivvy bag instead of a tent. I love sleeping under the stars, and since Morocco is a very dry country, a bivvy bag is perfect for the conditions.

Explore Your Boundaries by bike View

Tent, bivvy or hammock - what’s best for bikepacking? View
Cycling UK continues to support the UK to cycle
This remains true during this difficult period with the ongoing threat of coronavirus Covid-19
Read our latest advice on cycling
Join Cycling UK to help us change lives and communities through cycling
Membership gives you peace of mind insurance, discounts in cycle shops, rides & routes
Join now