Explore Your Boundaries by bike

Explore Your Boundaries by bike

The idea behind ‘Explore your Boundaries’ was to turn limitations into opportunities. While coronavirus rules across the UK differed, the introduction of the level system in Scotland made me curious as to where my local area, the City of Edinburgh, extended to. While exercise as such was not limited (neither in duration or distance) in Scotland, it had to start within or a maximum of five miles out of the local authority boundary. Even in the more strict ‘Stay at home’ phase, which started on 26 December, exercise - including cycling - was an essential reason to leave home.

A quick Google search pointed me in the direction of a file with the boundaries of all local authorities in Scotland, and Komoot helped turn the boundary into a gravel ride. An idea was born. While the route along the boundary of Edinburgh was a great start, some fine-tuning was still needed. I used the Open Cycle Map and Google Satellite layers on Komoot to adjust the route and shared it with Mark Beaumont.

Living in Edinburgh as well, Mark, the Guinness World Record holder for the fastest circumnavigation of the planet by bike, has been joining me for a weekly gravel ride since last November. While I enjoy solo adventures, those shared rides significantly helped to keep the focus (exercise with one person from another household was permitted). 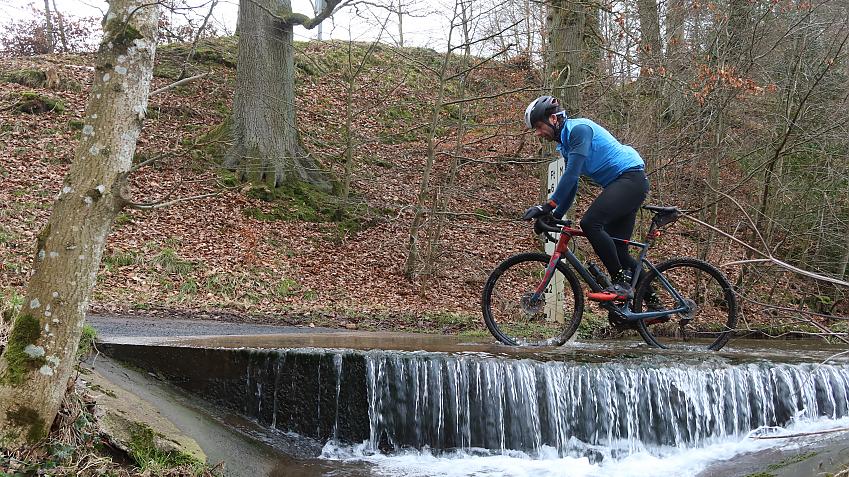 Mark was not only interested in riding the Edinburgh boundary to kick off 2021 on the 2 January, he also suggested extending the idea and mapping routes for other areas in the Central Belt. We spent the following week between Christmas and Hogmanay mapping eleven different routes, and soon afterwards extended the network further, with 24 routes now available on Komoot and Bikepacking Scotland to download.

Storytelling became an important part of our weekly rides, which happened almost completely in the dark. Often, those local adventures turned into small expeditions. On one of our first rides, we waded through knee-deep mud on a forest track, on others we tracked the line of an abandoned path through the undergrowth. Mark created a ride that followed the Edinburgh bypass on gravel and cycle paths or minor roads.

When I set off to meet Mark at 8am on the 2 January, I could hardly look up from my handlebars. The short but intense blast of snow helped cover the frozen tracks and paths when we set out to cycle 70 miles around the City of Edinburgh, our first big ride of 2021. It took us 13.5 hours to complete, while the same route took Mark 6.5 hours when the conditions changed two months later in March. Our boundary ride was no different from adventures further afield in much more exotic landscapes. The only change was that we started and finished at our front door. 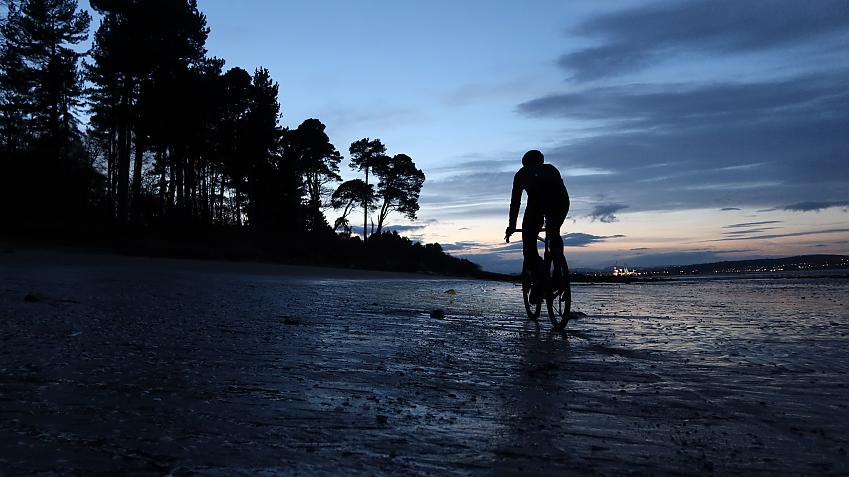 In the coming weeks, Edinburgh was covered in snow. After a tyre change to snow tyres with spikes, icy paths were no longer dangerous to cycle. The winter wonderland around the city was the continued inspiration I needed for new adventures. Small cycling adventures again turned into expeditions. On Burns Night, I pushed my bike up Caerketton Hill in the dark. The eastern side of the hill was so steep that it required microspikes underneath my cycling boots to negotiate the climb, but the downhill in deep snow was one of the best cycling experiences I had so far.

As much as you can sit indoors and do circuits or get your miles in on the turbo, you can't feed the soul in the same way unless you actually get out and ride

With the city gripped in frosty conditions for weeks, frozen lakes made for fascinating drone shots. And while I still missed the grandeur of the mountains further north, both the Pentland Hills and Moorfoot Hills filled in the gap nicely. Snow drifts made local roads impassable for cars, but often there was a small path left to cycle on them. 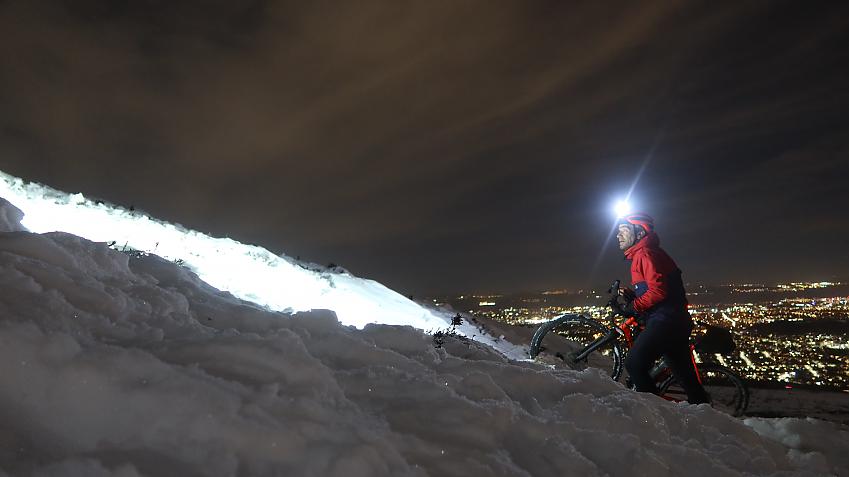 "As much as you can sit indoors and do circuits or get your miles in on the turbo, you can't feed the soul in the same way unless you actually get out and ride." Those words from Mark, taken from the short film we jointly produced about ‘Explore your Boundaries’ describe the motivation we both had during the last months, no matter how wet, dark or cold it was outside.

Going out to explore my local surroundings helped me to relax. It helped my mental as much as my physical well-being. Those cycling adventures, no matter how small they were, provided a welcome distraction from the bleak reality of lockdown news.

Going for local rides also led to discoveries that inspired me further. On a Sunday ride, dressed in my finest Sunday outfit, I discovered the signs for the Shale Trail, a new 16 mile walking and cycling route exploring the pathway of Scotland’s Oil Rush. A bit more research about the route led to the discovery of the Coal App, which provides a rich pool of information on local historic coal mining sites. 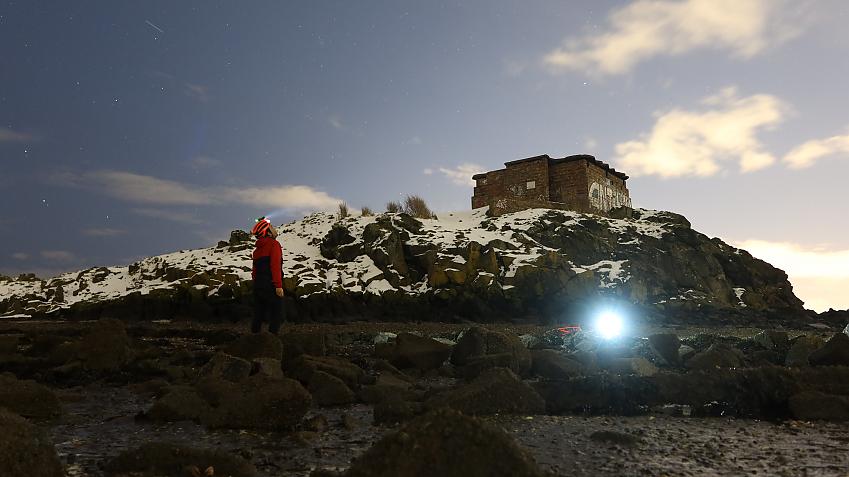 Riding at night provided sights of familiar surroundings in an unfamiliar way, and with the daylight hours increasing, the winter adventures in the dark will soon provide for different adventures in spring and summer conditions, hopefully with the odd micro-adventure close to home included.

In the beginning of March we rode another boundary ride close to our front doors, this time circumnavigating the boundary of Midlothian. And with the restrictions easing in Scotland at the end of April, a number of these routes jointly plotted will provide inspiration for upcoming staycations by bike, or longer day rides as the days get longer again.

"Backing yourself with the confidence to get out there and have that deeply personal reason to want to go and explore is addictive. It is absolutely why I do what I do" Mark says. He advises finding a friendship group who you can trust to go on these adventures with: "The best thing is, you don't need to go far. Yes, you can travel around the world, but right outside the city where I live, Edinburgh in Scotland, there's adventure within miles."

Leaving you with Mark's words, I hope to encourage you to plot your own local adventure. Best enjoyed by bike.