On Father’s Day 2019 I found myself in the Scottish Highlands at the summit of the renowned pass to Applecross, Bealach na Bà. My wife Joyce and I were supporting our son Richard’s North Coast 500 ride. He was cycling in memory of his son, Alex, who tragically died aged three weeks at Glasgow Children’s Hospital the year before.

“You might like to have a crack at the Bealach, Dad?” Richard said when he announced his NC500 attempt. My heavy and old but recently e-converted Claud Butler Voyager would be my steed. The e-bike conversion kit manufacturer, Cytronex, advised me to lower the maximum power of the motor to 80% to avoid front wheel spin and to lengthen the battery life.

Even with the conversion, the climb would be a challenge for the bike and for my arthritic knees. I was also awaiting surgery on a dislocated collarbone, which thankfully didn’t affect my cycling ability. 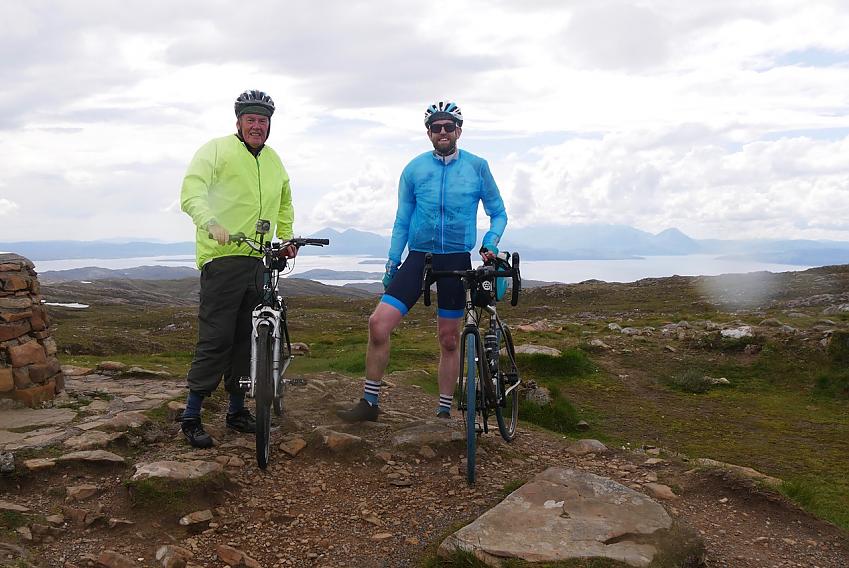 Robert with Richard, who still had far to ride, at the summit

In the months following I trained on the less testing hills of Sussex, shedding a stone in weight. On the day of my ride, Richard and his friend Tim departed Inverness on their 107-mile initial leg over Bealach na Bà while I made a start on the climb before they arrived. I used the battery sparingly until I reached the steepest section below the hairpins. From there I caught sight of Tim and Richard working hard below.

I arrived at the summit viewpoint with 40% battery remaining, shortly before Richard and Tim. The reward was a superb view across to Ardnamurchan, Eigg, Rùm, and Skye, followed by an exhilarating descent to Applecross. I stopped for a cup of tea while the lads ploughed on to Shieldaig.