Should you take panniers or bikepacking bags on your next trip? Cycling UK's technical editor, Richard Hallett weighs up the pros and cons.

The one rule always worth observing when it comes to packing for a cycle tour is that stuff expands to fill the space available. There’s nothing quite like looking at a small pocket of unused room inside a pannier bag to prompt thoughts of some slightly larger item that could possibly be squeezed into it. The converse, of course, is that the best way to keep weight down when touring is to restrict yourself to two panniers when you could fit (and fill) four.

There are other rules of thumb. It is, for example, better to carry anything beyond the lightest of loads on the bike rather than on the person, and loads should be attached so that they don’t adversely affect the bike’s handling. Regardless of such guidance, the art of packing luggage boils down to how much to carry, and how best to carry it.

Travelling light is straightforward, since a small, light load is easily accommodated, either in a rucksack, particularly if off-roading, or on the bike. Clothing for an overnight or weekend bed-and-breakfast tour will easily fit in the traditional saddlebag or larger, French-style handlebar bag, or even in a single pannier bag.

If you’re carrying everything you might conceivably need for a month’s cycle camping, it gets more complex.

The best option then is surely to base your carrying kit on pannier bags mounted on racks either side of the front and rear wheels. Or is it?

Rack-mounted panniers, for decades the standard model for heavy-duty touring, are now being challenged by the burgeoning popularity of bags made to meet the needs of bikepacking. 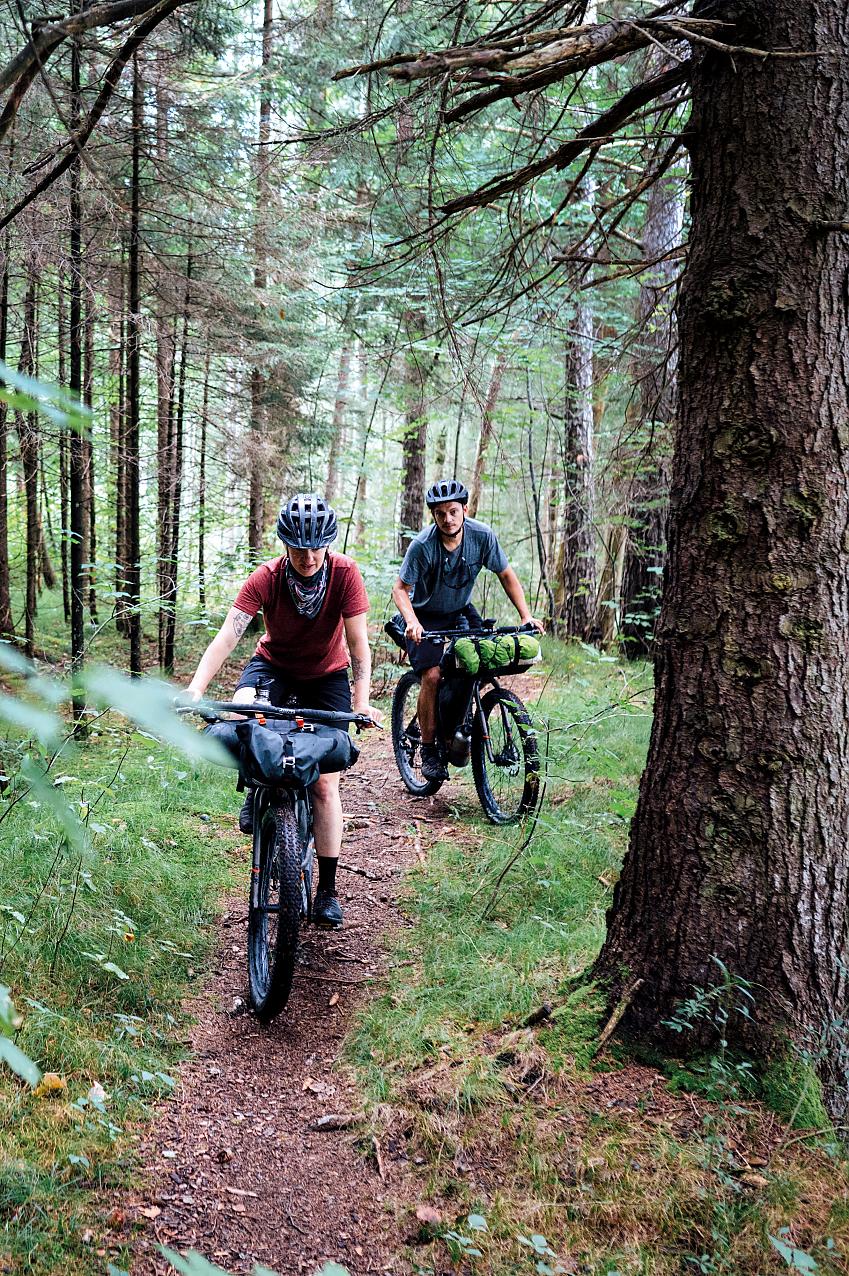 Bikepacking is a newish cycle touring format based on the idea of multi-day or longer unsupported adventure rides on, mostly, unmade roads and trails, and it makes some quite specific demands on equipment. These demands have influenced equipment design to the point where there is a recognisably ‘bikepacking’ style of cycle luggage.

This comprises, in essence, a seat pack behind the saddle, a roll pack in front of the handlebars, a frame pack situated within the main frame triangle, and one or two small pouches on the top tube. Items including tents and other sleeping kit that won’t go inside one of the packs can be strapped to the outside. Containers such as bottles and fuel canisters may be held in cages on the fork blades, under the down tube, or in pouches either side of the handlebar stem, using space available almost anywhere except either side of the rear wheel.

This keeps the bike itself slim and makes it easy to push when necessary, which off-road can be a lot of the time, without side panniers getting in the way. Placing bags along the centre of the cycle also aids aerodynamics, which may seem irrelevant to the cycle tourist but has a significant part to play in long-distance all-roads adventure competitions such as the Transcontinental Race.

Importantly, bikepacking gear is designed to keep weight down. It does not depend on supporting racks and is instead strapped directly to the relevant cycle part.

Bikepacking began with riders strapping regular dry-bags to their mounts, and the attachment system has advantages besides minimal weight: the bag is pulled tight around its contents, snugly securing smaller loads, and is held firmly against the bike, preventing the bag or its contents from jostling around when riding off-road.

It also means bikepacking gear can be easily attached to almost any bike, opening up opportunities to go long-distance touring on bicycles not obviously designed for the job.

Bikepacking gear can be easily attached to almost any bike.

Indeed, some advocates suggest that bikepacking gear suits lightweight machinery that hasn’t been beefed up to cope with the loads imposed by well-filled rack-mounted bags. In fact, a heavy seat pack puts a significant bending load on the seatpost and the frame’s seat tube cluster, as does a handlebar bag on the stem and fork steerer.

All-roads adventure tourers tend to be sturdy machines able to cope with such stresses, but a lightweight carbon-fibre road bike may not do as well.

Bikepacking gear should not be expected to carry heavy loads, which is fair enough since a large part of its appeal is its lack of weight.

There are other potential drawbacks. The packs themselves are oddly-shaped – the frame pack especially so – and can be tricky to fill effectively unless in some particular order. This and the way they are strapped to the bike can make accessing the contents a laboured affair, while the array of straps – four of them, to be cinched in a specific sequence, securing the Ortlieb handlebar pack to the bars – can make lashing the packs to the bike annoyingly time-consuming.

Much adventure touring by definition takes place off-road, where conditions can be tough.

The cycles used don’t usually have mudguards, which might trap debris and clog up, so bike packing requires waterproof luggage able to shrug off a liberal plastering of muck. Grit and mud-encrusted straps can quickly mar a frame’s finish if the luggage moves around, scuffing them against paint or anodising. If not a concern for the dedicated bikepacker, it might be a consideration if planning to stick to tarmac on a prized road bike or traditional tourer. 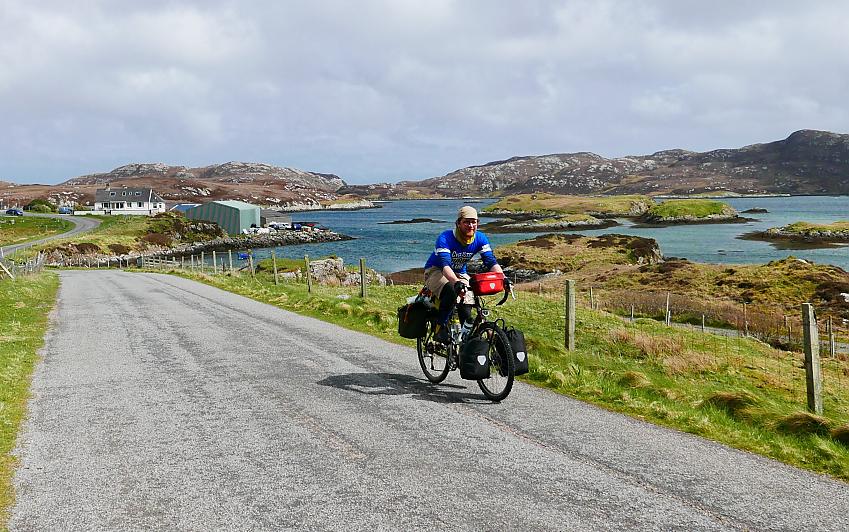 The answer may be to fit mudguards, in which case why not go all the way and opt for panniers? If bikepacking is about low weight and all-roads manageability, traditional panniers major on handling, capacity and convenience.

With the exception of the handlebar bag’s contents, weight is kept low and rigidly secured to the bike to minimise its effect on stability. The front pannier lowrider rack is designed to place its bags either side of the fork legs, with the steering axis passing as nearly as possible through their joint centre of gravity. The weight of two bags placed some way in front of the steering axis creates a force tending to steer the cycle as it is leaned, which can be tiring on a longer ride.

The same effect can be seen with a handlebar bag placed too far in front of the steerer; more weight can safely be carried if the bag is supported on a small randonneur style rack just in front of the head tube.

Not only must the rear rack be rigid enough for the load to be carried without flexing, but rear panniers must be mounted far enough back to ensure the rider’s heels do not touch during the pedal stroke. Touring frames designed as such have relatively long chain-stays to shift the rack backwards away from the bottom bracket. A correctly-loaded rack transfers its weight directly to the rear hub via the dropout, rather than through the frame, which needs to be torsionally rigid to ensure stable high-speed handling.

A wide topped rack presents an enticing place to strap a long dry bag or similar, but weight should not be concentrated at the rear of the cycle. Front panniers should be used before adding a third bag to the rear pannier, and some commentators even advocate using front-mounted panniers before putting anything on the back wheel. There’s something to be said for this idea simply because the front wheel is inherently stronger than a dished derailleur rear, although this does not apply to wheels with hub gears such as Rohloff.

Today’s pannier bags are quick and easy to fit and remove at a destination, and top level examples such as Ortlieb’s standard setters are entirely waterproof and yet easily opened for access to contents. Their cuboid shape makes for efficient packing and they will, of course, take a huge quantity of stuff.

Their two major shortfalls are poor aerodynamics, which is inconsequential for most tourists, and their considerable weight even when empty. Some of this can be shaved from most panniers. The Ortlieb Sport and Back Rollers shown both boast internal zipped pouches weighing perhaps 100g each, as well as various straps beyond those needed for closure as pictured, and getting rid of them could save up to 500g per four bag set.

If the thought of getting the scissors out on new bags is too painful, Ortlieb offer a ‘Plus’ version of the bags in a lighter waterproof fabric, saving some 410g per set. It’s a fair chunk – but not as much as simply leaving at home anything you really, really don’t need.

Bikepacking vs Touring: read more on the differences and similarities between bikepacking and touring

How they measure up 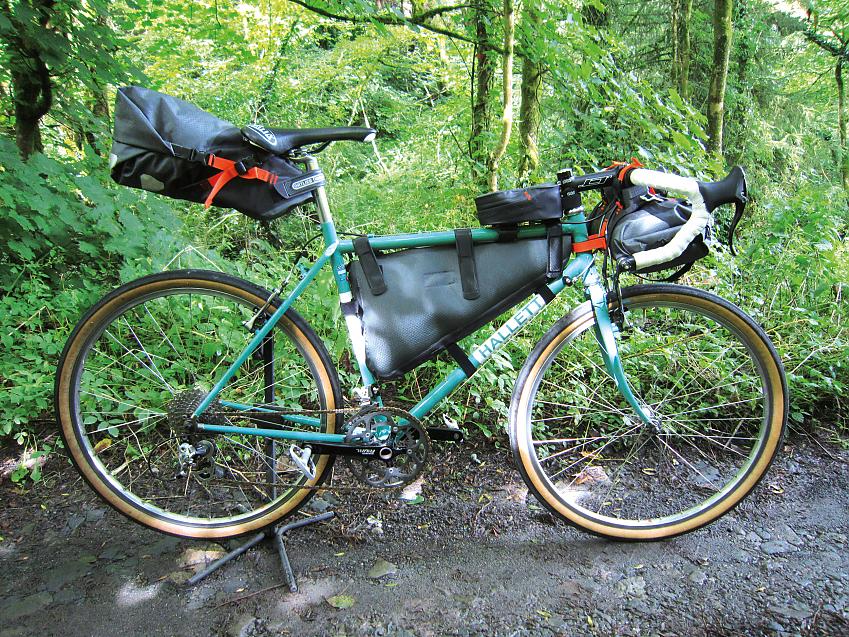 Presented with a suite of Ortlieb bikepacking gear to test, I decided to try it out on an overnight (B&B) tour in west Wales with Cycle contributor Jack Thurston.

First problem: I could not ride comfortably with the frame pack fitted. My knees and calves brushed the sides of the bag. This is worth checking before investing in such a bag.

The handlebar pack is essentially a tube with Ortlieb’s signature roll closure at each end. With a pair of trousers inside, it could be pulled down to fit inside the bends of my drop handlebars, but this left the end straps touching the bars’ drop section and getting in the way of the hand-hold.

Splayed ‘Midge’-pattern drop bars might solve this, but with no time to find any I tried stuffing the seat pack. Its wedge shape made packing shoes easy enough but squeezing clothing alongside proved taxing.

Although its maximum capacity of around 15l exceeds that of an Ortlieb Sport Roller front pannier, the latter is easier to fill without wasting space, so for speed, convenience and, er, appearance and since we were sticking to tarmac, I abandoned bikepacking, filled two Sport Rollers and clipped them to a Tubus Sky rear rack. 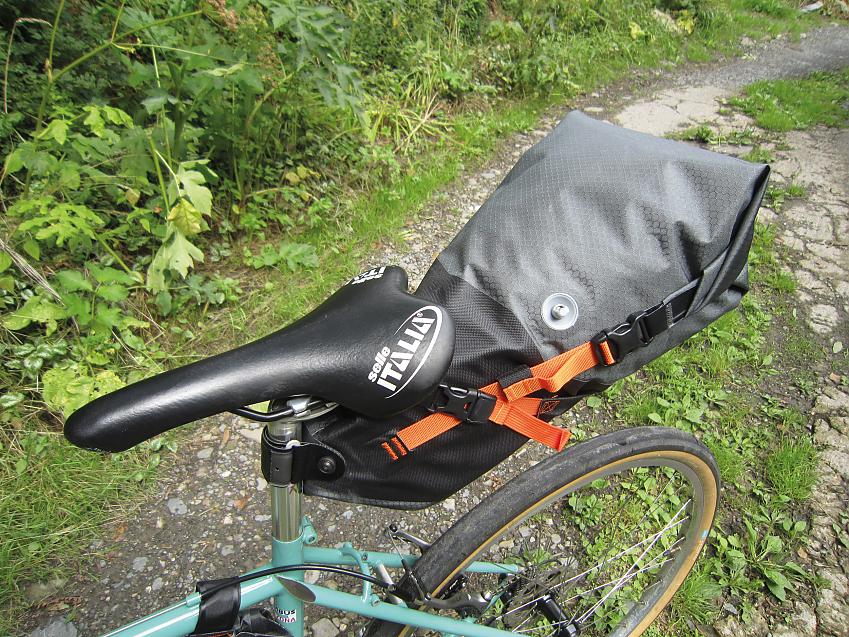 10 multi-day on road tours in the UK View

10 off-road routes in the UK View

Great Rides: Bikepacking the West Country Way View
You too can champion cycling in the UK
Give your support today to help Cycling UK’s charitable work tomorrow. We double every pound you give through other sources to help change lives and communities through cycling.
Volunteer now
Cycling UK continues to support the UK to cycle
This remains true during this difficult period with the ongoing threat of coronavirus Covid-19
Read our latest advice on cycling
Join Cycling UK to help us change lives and communities through cycling
Membership gives you peace of mind insurance, discounts in cycle shops, rides & routes
Join now