Ticking all the regular boxes, these two machines are, most definitely, touring bicycles – and at a very reasonable price. So reasonable, in fact, that the seasoned cyclist might wonder whether either of them is truly up to the job of carrying rider and luggage wherever the road – or track – leads. 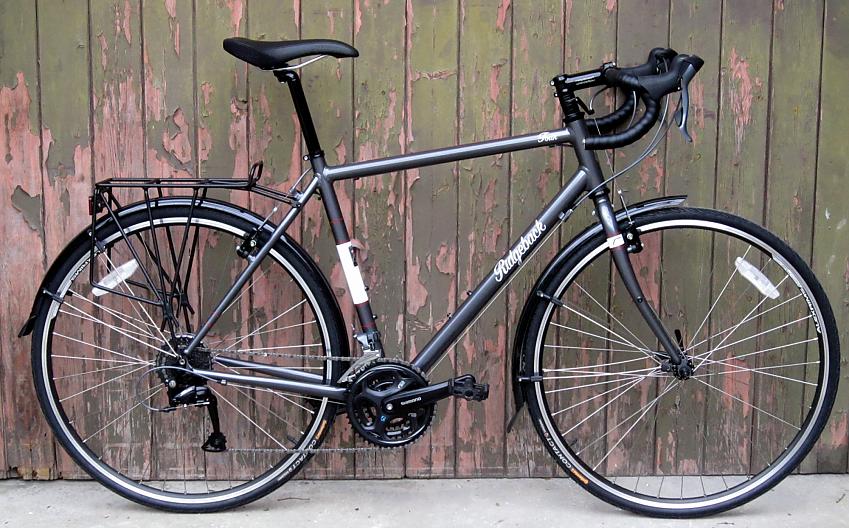 Fear not. Both are properly equipped and built to last. Unsurprisingly, given the cost imperatives of assembling a bicycle at such an unforgiving price point, they are almost impossible to separate on specification or ride experience. They even share the same singular omission, of which more later. Indeed, a choice between the two is hard to make unless on the basis of size suitability or preferred appearance.

Leaving aside their respective finishes, the framesets are hard to distinguish. Both boast a beefy TIG-welded aluminium frame and steel fork with integral threaded bosses to allow the fitting of a low-rider front rack.

The Revolution’s 7005 aluminium alloy tubing shows evidence of efforts to enhance its performance: the partially-ovalised down tube has a reassuring gusset to reinforce the head tube junction, and the stays are given an hourglass-style bend.

The Ridgeback’s heat-treated 6061 alloy frame lacks the reinforcement and profiling but doubtless doesn’t need it and both bikes look equally capable of handling serious roughstuff. The Revolution has a third pair of bottle cage bosses under the down tube, but the Ridgeback has a seat-stay pump peg. There are minor differences in rear dropout shaping but both bikes have a replaceable rear derailleur hanger. The usual gear and brake cable stops are present, correct and neatly attached.

A slight distinction may be discerned in their geometry, the Revolution using marginally shorter chain-stays and slacker angles to place less weight over the front wheel. Despite having shorter cranks, its bottom bracket is higher and this, combined with a much longer top tube, gives the Revolution a much bigger ‘feel’ than the almost dainty Ridgeback when there’s but 10mm difference in their listed sizes.

With triple chainsets and wide-ratio eight-speed cassettes, the two bikes offer the kind of gearing range cycle tourists once only dreamed of. Steel is used in place of aluminium for all three chainrings and the aluminium alloy cranks use an old-school (but effective) square-taper axle fitting. Ridgeback has gone for longer 175mm cranks. For all the arguments over this aspect of cycle design, longer cranks suit the lower cadences often chosen by touring cyclists, but unless the prospective purchaser has a preference, it’s hardly a deal-breaker. 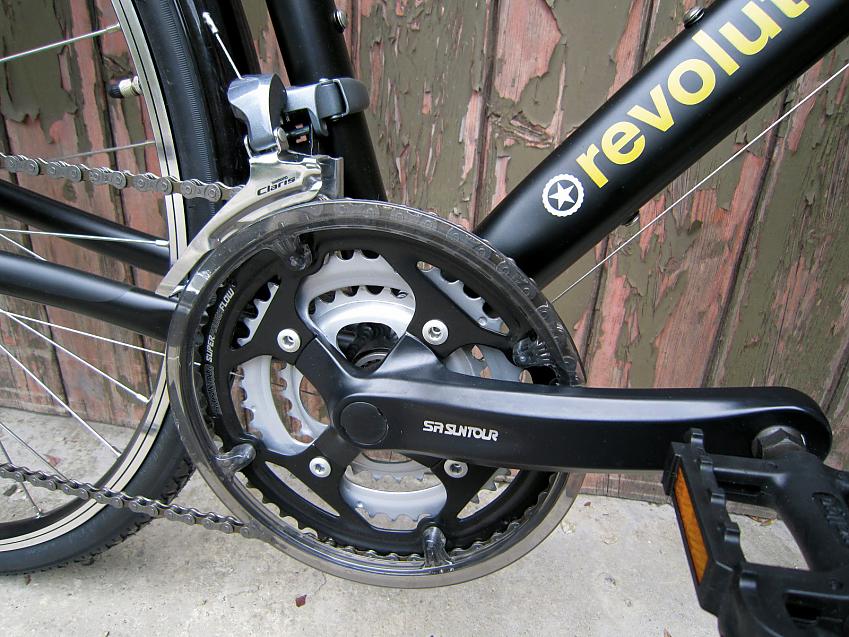 Shimano derailleurs ensure easy, reliable shifting, operated in both cases through Claris dual-control levers. These are proper STI units, with paddles for the shift to a smaller sprocket or chainring and a neat gear indicator window for those moments when you aren’t sure there’s another gear available. The Revolution’s Altus rear mech has a huge lower jockey wheel, which inexplicably enhances its appearance, but the silver painted finish on the bike’s front mech stands out on a machine that is otherwise a well-coordinated collection of non-shiny blacks.

This finish extends to the handlebar, stem and seatpost. The Ridgeback goes for a high-gloss black on the same components to partner its more sophisticated paint scheme, going some way, perhaps, to justify the 10% price premium. But both sets do their job perfectly well and, using industry standard dimensions, are easily upgraded if the urge arises. So, too, are the wheels, but there’s no obvious reason to do so in either case.

Those on the Revolution have just 32 spokes each but are well-built and look good for serious mileage. The same goes for the Ridgeback’s 36-spoke hoops, which have slightly narrower rims and run Continental Contact tyres in place of the Revolution’s Kendas. Although both are sized at 700×32, the Kendas are significantly fatter at 34mm for inflated width compared with the Contis’ 29mm. Both tyres have the heavy tread pattern widely deemed suitable for road touring but in practice better kept for canal towpaths and mid-winter commuting.

Both bikes feature that one-time signifier of the proper touring bike: the cantilever brake. Both sets are made by Tektro, with Ridgeback choosing the shinier, braced CR510 model, pulled by Shimano-style straddle wires, over the Revolution’s geometrically similar Oryx design with traditional straddle wire and cable hook. Cantilever brakes remain a great choice for bikes with tyres too fat for callipers and provide as much braking power as most owners will ever need, but they do need some form of adjustment for pad wear. In an extraordinary omission, neither bike has it. The only option is to re-clamp the inner wire each time adjustment becomes imperative. Even at this price, it should not be beyond a manufacturer to provide an in-line adjuster for both brakes.

The front brake cable route on both bikes also falls short of ideal. Both have the usual steerer-mounted cable hanger above the upper headset bearing and in both cases the outer casing simply sits in a slot designed for a kinked cable guide. This and the lack of adjustment are easily rectified and detract from what would otherwise be convincing brake performance.

Some thought has gone into the provision of the Revolution’s saddle, which, like that of the Ridgeback, is on the plush side of well-cushioned. Either should satisfy at least the short-term requirements of most owners. 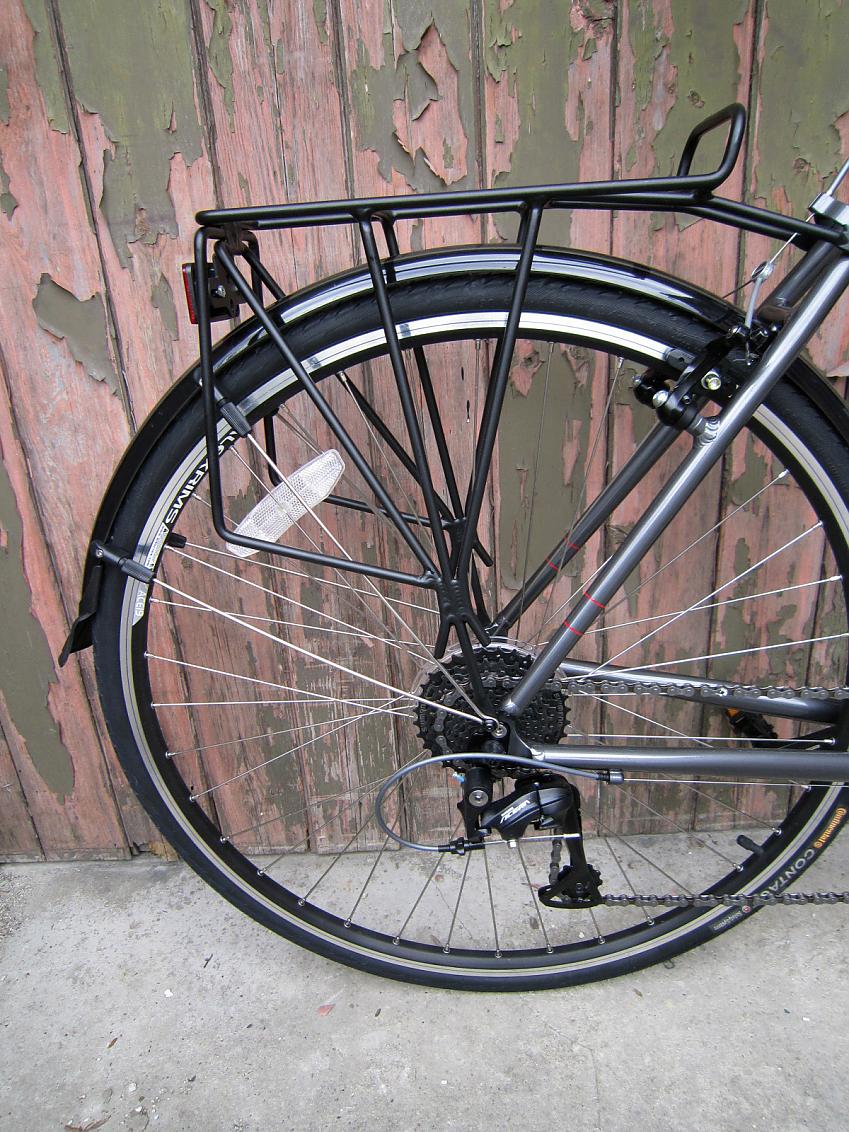 Mudguards and a rack are non-negotiable touring bike equipment, and both bikes hit the mark. Anonymous chromoplastic-style mudguards shield both from muck thrown off the tyres; resilient and long-lasting, such guards rarely give trouble unless debris gets trapped underneath, in which case some sort of release system – fitted to both – allows the ’guard to become semi-detached before it folds and jams its tyre. So no quibbles there.

No complaints either with the racks fitted. Both are substantial aluminium alloy items capable of supporting significant loads (I didn’t test them to failure). The Revolution’s rack is provided with an elasticated strap suitable for holding rolled-up clothing. It would be too much to expect the provision of a front rack at this price but the fork bosses are there if needed, making both bikes the potential basis for a true long-distance mount.

It would be easy to get hung up about the weight of these machines. Both come in at just under 14kg minus pedals, which sounds a lot but is in fact lighter than machines in the Ridgeback touring range costing twice as much. If used for their intended purpose and loaded up, any perceived excess weight will quickly become lost in the whole. More important are ride quality and handling. Both handle well in that stable, undemanding way that enhances a touring outing.

Ride quality is as might be expected of inexpensive but durable bikes with sturdy wheels, forks and frames: it is somewhat wooden. Some of this may be laid at the door of the tyres. With their heavy tread patterns, these tyres may last well but they are inevitably sluggish even in good conditions, although the Revolution’s wider Kendas give it a discernible edge. Used for riding to work on a budget, they make a lot of sense for those commuters uninterested in urban Strava segments, but their rolling resistance only adds up as weight is added. A simple swap for much faster rubber such as Conti’s 32mm Gatorskin or similar would greatly enhance the riding experience of bikes that, for the most part, exceed the expectations that might be had of a £500 road bike, let alone a well-equipped tourer.

That two bikes with one design goal should be so closely matched is no surprise. That both should be so soundly-built and well-considered might be a surprise at the price, but that both should share the same glaring omission is almost bizarre. It’s not a hard one to fix and wily purchasers might do well to use it as a bargaining point… In the end, while it would be easy to give the Revolution the nod given its lower price, the better bike in this test is simply the one that fits better. 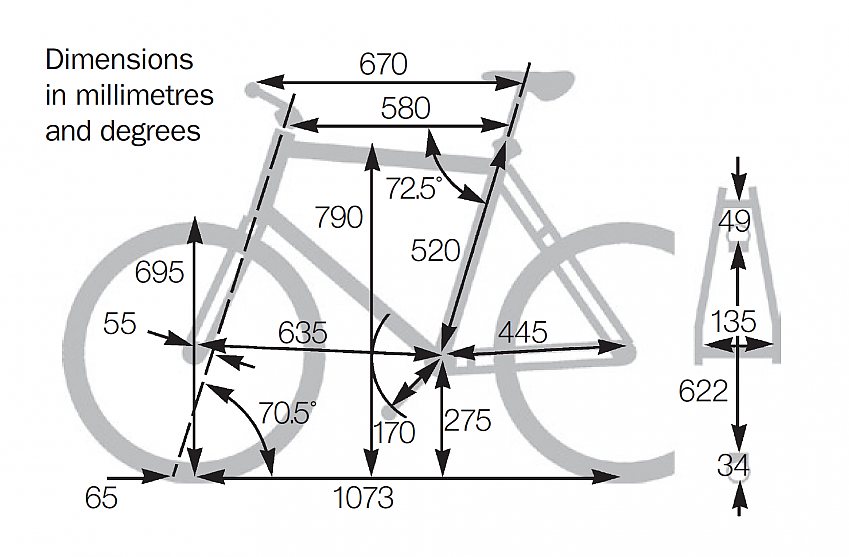 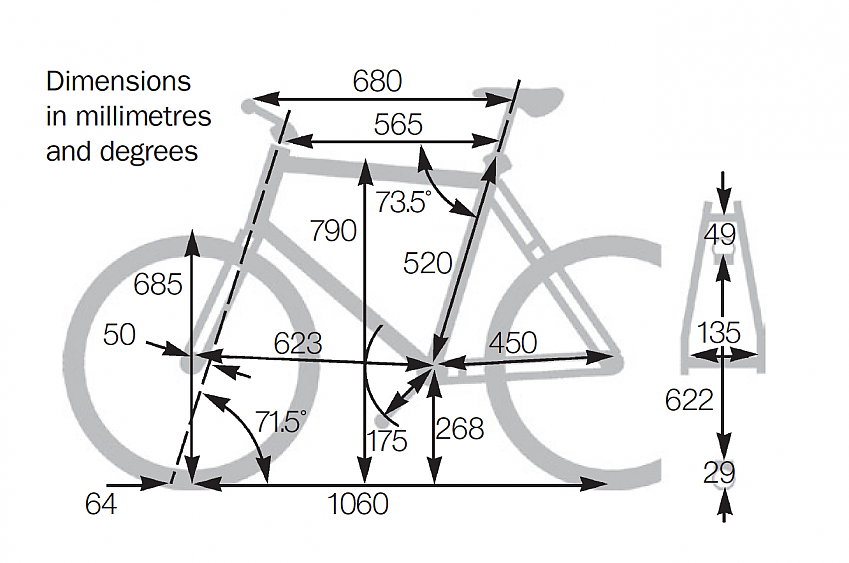 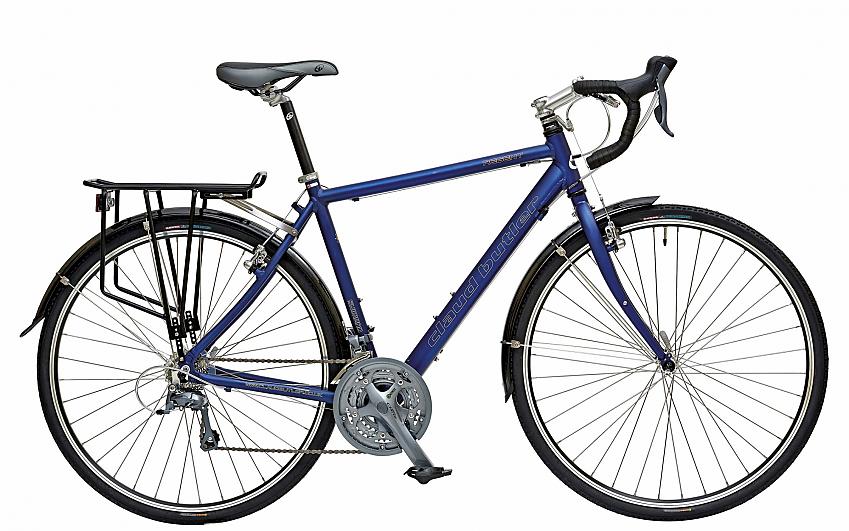 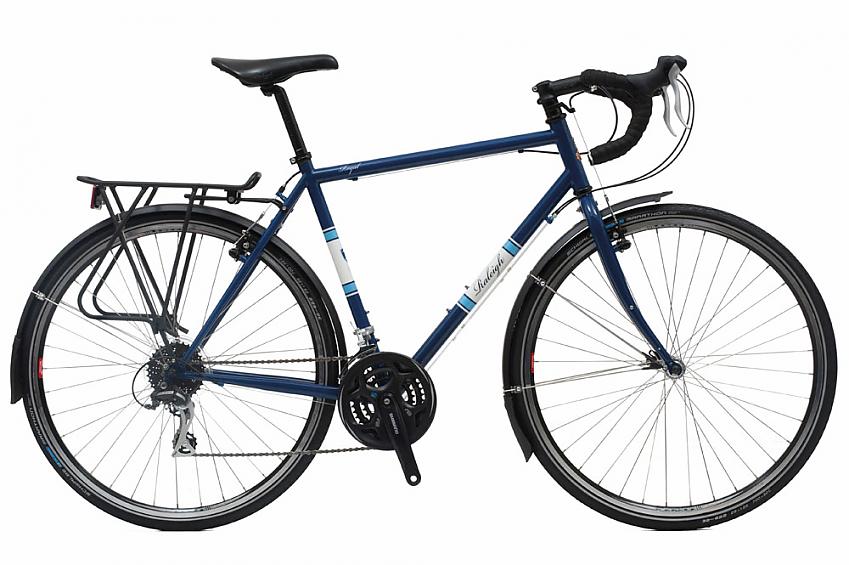 We reviewed Raleigh’s cro-moly tourer some years ago but the new model looks to be improved, gaining a Shimano Claris groupset.