Flat-bar trekking bikes are a tempting alternative to drop-bar tourers, especially at lower price points. Jack Thurston reviews one of each.

The more money you spend, the harder it is to buy a truly bad bike. On a tight budget, there are choices and compromises to be made – between gears, brakes, wheels, geometry, accessories, even the type of handlebar. (Second-hand is another choice; see the For Sale section on forum.cyclinguk.org).

This review pits a classic British-style drop-bar tourer against a flat-bar trekking bike of the type favoured by Continental cycle tourists and urban commuters. As well as moderately loaded touring, each bike would suit commuting and everyday usage.

Dawes have now brought most of their touring bikes under the venerable Galaxy marque. Galaxy AL (£599) is a new name for the entry-level Vantage tourer. Specialized’s £699 Source Sport Disc is distinguished by its flat handlebar and hydraulic disc brakes. Ubiquitous in the mountain bike world, discs are spreading fast to city bikes, tourers, cyclocross and some road bikes.

The frames of both bikes are made from similar varieties of aircraft-grade aluminium alloy that’s widely used in mid-range aluminium bikes. Though oversized compared to the slim tubes of steel Galaxies, being round they retain a classic look that’s complemented by a restrained matt grey paint job. By contrast, the Specialized’s main tubes are flattened and gently curved. In theory, this allows designers to put the strength exactly where it’s needed while keeping weight to a minimum. They lend the bike a modern look that’s reinforced by a grey-on-grey colour scheme that’s almost logo free – something that will be appreciated by anyone who prefers their bike not to double up as an advertising hoarding.

Both frames have sufficiently long wheelbases to avoid any interference between toe and mudguard and heel and rear pannier in the sizes tested."

Both frames have relaxed geometries and sufficiently long wheelbases to avoid any interference between toe and mudguard and heel and rear pannier in the sizes tested. It’s always worth checking this for yourself, especially if considering one of the smaller frames as they all use 700C wheels, rather than the 26-inch wheels that manufacturers like Surly and Thorn use on their smaller frames. The tyres on both bikes are wide enough to negate the hard ride that’s sometimes associated with aluminium bikes.

(Left) A short head tube means that this is as high as the Dawes's handlebar will go, unless you fit a new stem (Right) Wider-profile cantilevers than these Tektro Oryx ones would improve the braking

Though I was testing the largest Dawes, the head tube was short. As the fork steerer was short too, it was impossible to raise the handlebar to anywhere near the level of the saddle, which is about where I like it on a tourer. The Specialized comes in a wider range of sizes to accommodate taller riders, and its longer head tube gives a more upright riding position.

Elsewhere, the Specialized has some neat features: the aluminium mudguard is bolted to the pannier rack, which gives a neat look to the rear end of the frame. There is internal routing for dynamo cables, and a slot in the rear mudguard takes the cable all the way to the tail light. There are mounts on the underside of the seat stays for a wheel lock (not included) and a kickstand. These are nice touches for a bike aimed at urban commuters, and I’ve come to appreciate a kickstand while touring too.

While the Dawes is made largely for the British market, the Specialized is sold in larger quantities around the world. Higher-volume manufacturing means savings that can be passed on to the consumer or used for better quality components. This (and the £100 dearer price) gives the Specialized an edge in terms of specification.

Apart from the shifters, however, the bikes share almost identical Shimano Acera 3×8 drivetrains. These are reliable, cheap to maintain, and offer plenty of gears, thanks to touring-friendly 48-38-28 triple chainsets and mountain bike cassettes – an evenly-spaced 11-32 on the Dawes and a 11-34 Megarange on the Specialized.

Wheels are usually the weakest link in bikes at the lower end of the market. Budget hub bearings and rims can wear faster, and less time and attention may have been spent truing the wheel and tensioning the spokes. The Specialized’s wheels have 32 spokes while the Dawes’s have 36, an advantage to the Dawes, all other things being equal. During the test, a loose spoke on the Specialized resulted in a pronounced rear wheel wobble. Even so, a careful rider should get a good few thousand miles out of either wheelset before considering upgrading to an entry-level pair of hand-built wheels.

Both bikes come with sensible tyres: tough Schwalbe Marathon 35mm on the Dawes and slightly faster-rolling Specialized Nimbus 32mm on the Specialized. Both work well on a mixture of road and gravel paths and have reflective sidewalls for increased visibility at night. The plastic mudguards on the Dawes are rather flimsy, and the rear mudguard is a full foot too short. The Specialized’s aluminium guards are sturdier but narrower, and this limits tyre width to a maximum of about 35mm. The Dawes could fit up to 40mm tyres with the supplied mudguards.

The most significant difference between the bikes is the handlebar. The drop bar of the Dawes has a lovely, shallow drop that’s perfect for touring, and bar width varies according to frame size, which is helpful. The Shimano STI shifters are entry-level Sora and work fine. On a budget bike, STI shifters are a relatively expensive component and account for a good chunk of the bike’s cost, meaning compromises elsewhere. The Specialized has a comfortable, gently swept flat bar with ergonomically shaped grips and Shimano Acera Rapidfire shifter pods; these work just fine too. I find a flat bar fine for an hour or two’s riding but for longer rides I’d want to add bar ends to give some additional hand positions, or even swap the flat bar for a ‘butterfly bar’, which is popular with many long-distance cycle tourists. If this flat bar is too wide for you, meanwhile, it can be hacksawed to size.

The rear disc caliper is on the chain-stay, where it won't foul a rack or pannier

The brake system is the other big area of divergence between the two bikes. The Dawes has Tektro Oryx low-profile cantilever brakes that I found to be spongy and lacking in power. I’d replace them with a wider-profile design with more power and better modulation, such as Tektro’s CR720s. STI shifters rule out switching to standard V-brakes without adding Problem Solvers’ Travel Agents to increase the cable pull.

By comparison, the Specialized’s Tektro Auriga hydraulic discs had much more stopping power and felt exceptionally smooth and solid. Disc brakes work better in wet, mucky conditions – an advantage when riding off road or on grimy urban roads. Hydraulic discs don’t suffer from cable friction like their mechanically-operated cousins, and the pads are pretty much self-adjusting, because both pistons move. It’s a huge bonus. On the downside, in the rare event that a hose seal fails, you’re left without a functioning brake, and a repair is more involved than replacing a cable. For most, replacing a hydraulic hose is a bike-shop-level job, which is why cyclists heading off for adventures in remote or faraway places tend to steer clear of anything hydraulic.

Both bikes come with decent alloy rear racks that are rated for loads up to 25kg and have a mounting point for a rear light. The Specialized’s rack is more graceful but a shade too narrow for a standard rack bag.

The handlebar will be the defining factor for anyone choosing between these two bikes. I prefer drops for riding long distances on the road, as they offer more hand positions, reduce pressure on the wrists, and give me a more comfortable body position. When riding off-road or negotiating city streets, a flat bar makes steering more agile and usually gives a more upright riding position.

The Dawes handled predictably, which is no a bad thing. On a long day’s touring, it’s nice to switch off and let the bike steer itself. The Specialized’s combination of a more upright position, lighter steering, and rock-solid brakes made it a more lively ride. I took it off-road on bridleways and through woods. Its handling and braking give the Specialized an advantage as an urban commuter too, as do the fittings for dynamo lighting.

I loaded each bike with a 22kg load in rear panniers and, while the steering felt a great deal lighter on both bikes, there was no disconcerting tail-wagging-the-dog wobble nor any shimmy when riding fast downhill.

Having spent almost 20 years commuting and touring on a Dawes Londoner, I know that a classic drop-bar tourer is a really versatile choice of bike. While tall riders may find even the biggest Dawes too small, those planning on doing a lot of road-based touring will lean towards this kind of bike. The Specialized, £100 dearer and nearly a kilogramme lighter, is a very capable all-rounder. It’s a modern hybrid.

In choosing between these two types of bicycle, handlebar preferences will be the decider. Drops and flats offer such a different feel that it’s a very personal choice. With similar gearing, geometry and restrained grey paint jobs, the other big factor is the brakes. The hydraulic discs confer a clear advantage to the Specialized, unless you’re planning to head into wild, remote places – in which case, you may be looking at another kind of bike altogether.

This was first published in the April / May 2015 edition of Cycling UK's Cycle magazine. 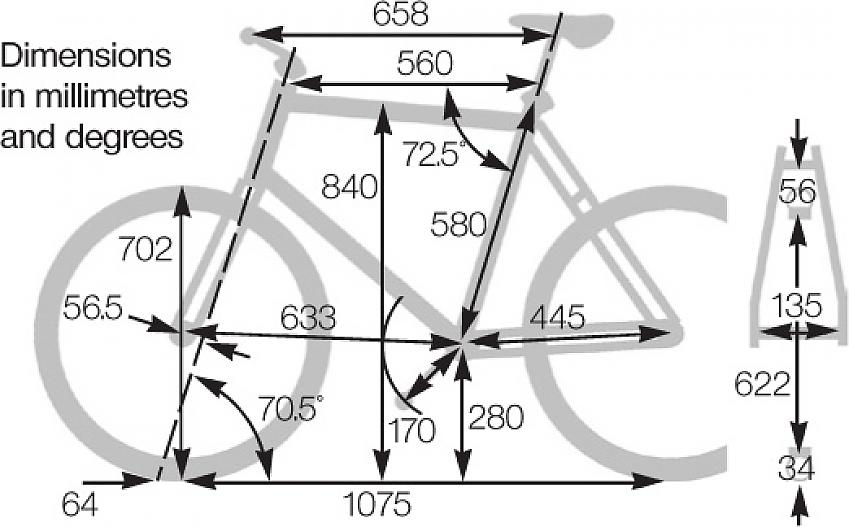 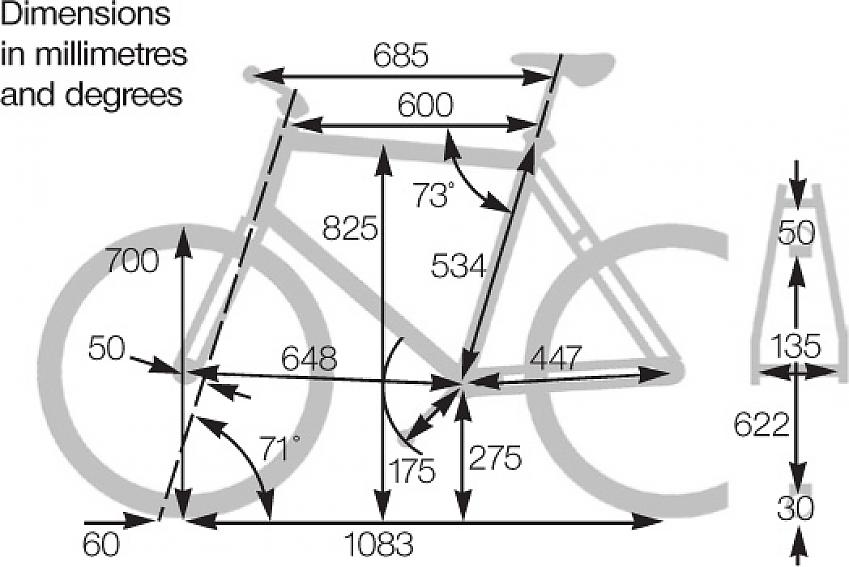