Ahead of Cycle to Work Day (4 August), Cycling UK has published its latest analysis of transport data in England showing more people in England are turning to cycling as the impact of record fuel prices is felt. The UK’s cycling charity is calling on local authorities and employers to do more to help people drive less and cycle more, particularly for short everyday journeys.

According to the figures from the Department for Transport, cycling levels in England began to rise in March as the cost of fuel rapidly increased.

As fuel prices reached record highs in July, cycling levels were even higher than those seen at the same period in 2020, when quieter roads during the pandemic encouraged many more people out on their bikes.

On average between March and July this year, weekday cycling levels have been 47% higher, and on weekends and holidays 27% higher, when compared to the same time in 2021.

With 71% of all journeys made in the UK under five miles, switching some of those to cycling is a simple way to help people make ends meet during the cost-of-living crisis

“Rising fuel prices have triggered some people to think about their transport choices, switching some of their car journeys to cycling. But too many people don’t feel like they have that option because they don’t think our roads are safe enough to cycle on.

“The answer to that is more and better infrastructure for cycling and walking, giving more people the opportunity to do so safely rather than default to driving a short trip to work or the shops.

“With 71% of all journeys made in the UK under five miles, switching some of those to cycling is a simple way to help people make ends meet during the cost-of-living crisis, with additional health, wellbeing and environmental benefits. But to give people that choice we need local authorities to act now to make active travel a realistic option and help people keep moving.”

“I've always enjoyed cycling for leisure, but I find utility cycling – riding with a genuine purpose – particularly satisfying. It saves money, is kinder to the environment, usually takes barely any longer than driving, and turns a mundane task into a mini adventure.

“Lately fuel prices have distilled my thoughts even further. The ever-rising price has made me feel more and more like the government and fuel companies are simply taking advantage of me. And then about a month ago something snapped and I placed my car on Autotrader, and within 2 days it was gone.

“Looking back I can't recall the last time I genuinely needed to drive. Being completely honest with myself I had owned a car for the last 20 years simply because it was the expected thing for an adult to do.

“A month in I have no regrets, I'm managing quite nicely and have no plans to go back. I'm saving £60 a month on car tax and insurance, never mind the cost of fuel and maintenance, so I am already noticing the improvement in my finances.” 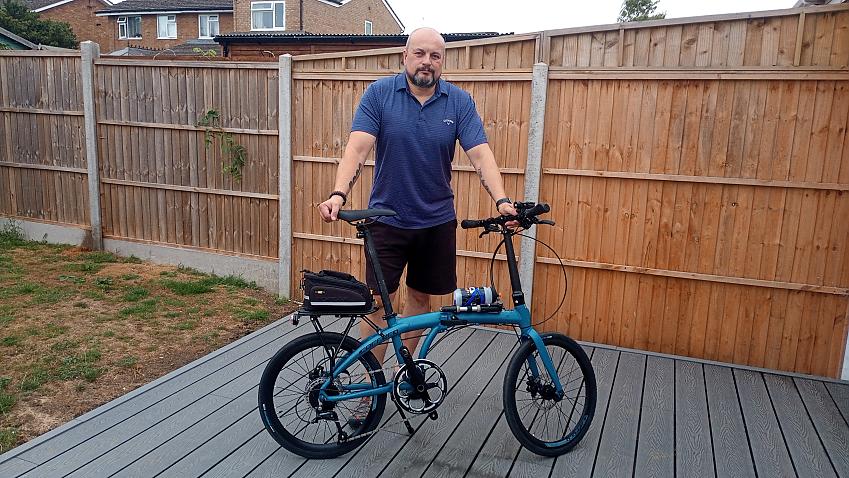 Richard Jewell with his steed

Cycling UK offers help to all those who want to drive less and cycle more of their journeys, and supports workplaces that want to encourage their staff to commute by bike through the Cycle Friendly Employer accreditation. An active workforce has been shown to be beneficial from a business perspective, taking fewer sick days and being more alert and productive during the day.

Examples of how Cycling UK helps the UK drive less and cycle more:

Cycling UK is encouraging people who have opted to cycle more due to fuel price rises to share their experiences on social media using the hashtag #DriveLessCycleMore.

For more information, please contact the national Cycling UK press office. Due to the restrictions caused by the coronavirus outbreak, currently the main press office number (01483 238 315) is not being monitored. If you would like to speak to a member of the press office during working hours (0900-1700) please email publicity@cyclinguk.org or call 07786 320 713.