Take on a new challenge and boost your wellbeing

Cycling connects you with nature and gives you a workout: a great combination to improve mental and physical health

Take on a new challenge and boost your wellbeing

Bike Week celebrates how cycling boosts our wellbeing. Tackling a new challenge is one of the best ways to feel good about yourself

It’s now so long since coronavirus turned our daily routines upside down that many of us have become stuck in a new routine – one that involves a lot more time at home in the same old surroundings. More than a year of living with lockdowns and worry has taken its toll on our mental and physical wellbeing. A survey by the Policy Institute at King’s College London and Ipsos MORI in March 2021 found that 42% of people believe their mental health has worsened due to the pandemic and 38% believe their physical health has suffered.

Staying active, especially outdoors, has been one of the main coping mechanisms for people suffering from lockdown stress. A study by the Mental Health Foundation in February this year found that taking exercise outside helped 59% of people deal with worry.

The central theme of this year’s Bike Week, which begins on Sunday 30 May and runs until 5 June, is celebrating the amazing ways cycling can boost our mental, physical and emotional wellbeing. One of the best ways to feel good about yourself is to take on a challenge, whether that is tackling a big adventure, learning a new skill, or simply taking the leap to get out there – you’ll be glad you did!

The Bike Week homepage features more than 30 challenges to try, whether you’re young or old, a novice or a seasoned rider. If you are looking for new horizons now that travel restrictions have eased, you’ll also find more than 200 inspiring routes. 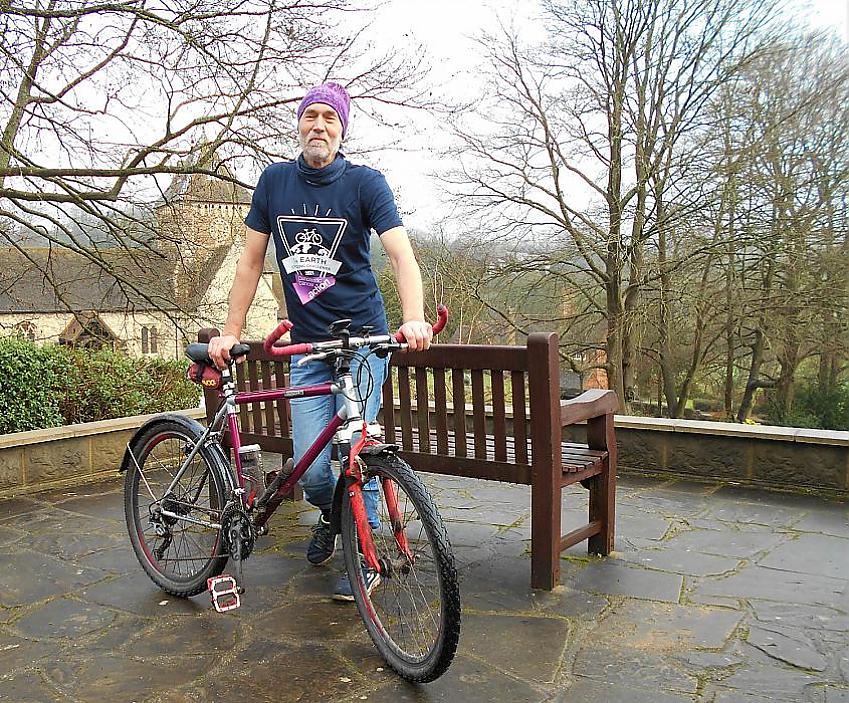 How cycling turned Ted’s life around

One Cycling UK member who knows from experience how pushing yourself can change your life for the better is Ted Gomm, 68, from Hampshire. Here in his own words he explains how cycling helped him cope with serious mental health problems:

I have been prone to mental health issues throughout my life, suffering as I do with OCD and insecurity. I had a few depressive episodes, starting in my late teens, but I was mostly fine and happy, and it remained that way until about nine years ago when a sequence of events triggered off a serious mental meltdown.

It started with obsessive worrying, which in turn led to heartburn and nausea, and as time went by these symptoms got worse. I was prescribed medication for the heartburn and that’s when the trouble really kicked off.  It may have been made worse by the prescribed medication (a proton pump inhibitor) which, as a side effect, lowers the levels of absorption of magnesium into the body – magnesium is considered the “happiness” mineral associated with mental wellbeing.

Within days I was sitting up in the middle of the night, sobbing, shaking, and finding myself left with chronic insomnia. I often found I couldn’t get out of bed and when I did, I would just shake uncontrollably and want to jump straight back in. Going out was almost impossible and mainly took the form of long walks during which I would pace up and down in a quiet spot while screaming, all the while hoping no one could hear me. I even developed what I call silent screaming, while pacing up and down the kitchen. I could not cycle; did not want to do anything; and spent a lot of time considering and investigating suicide.

By feeling the gentle rhythmic motion and listening to the sound of the tyres over gravel, you can distract your mind... and completely focus on the experience. Best of all, you get to meet nice people and eat lots of cake at the tearooms

This extreme anxiety continued for well over a year and was almost a permanent panic attack. Fortunately for me, I had fantastic friends and a wonderful wife, who were able to get me out from time to time, and one friend in particular used to make me go cycling with him. At first there was no enjoyment, I just went through the motions, usually staring at the ground and wishing I was home. But eventually I was able to go out by myself. Initially I stayed local, hoping nothing would happen to the bike as I was unable to even fix a puncture (which for an engineer by trade was not a good state of affairs).

Then one day, as I was cycling down the canal path, I found I was actually enjoying the ride, and feeling pleasure for the first time in over 18 months. This change in my thinking was so dramatic, I immediately felt there was hope, and decided to continue the ride over to a friend’s house where I proudly stated that I was better! Of course, it is not as easy as that, but I did finally have something tangible to hold on to and I haven’t looked back since. It is still not easy, but the lessons I have learned from this dark episode in my past have given me the tools to have a great future.

My bike was my saviour! Well, that sounds a bit over the top, but we all know how much exercise can help with mental health. For me it has significantly reduced both my anxiety and depression.

But there is so much more to cycling, apart from the exercise and getting outdoors. By feeling the gentle rhythmic motion and listening to the sound of the tyres over gravel, you can distract your mind, and use Cognitive Behavioural Techniques (CBT) to completely focus on the experience. Best of all, you get to meet nice people and eat lots of cake at the tearooms.

I am out on the bike most days, keeping me fit and happy. Most rides are what I call 'routine', keeping me in a good place, and then there is the occasional challenge ride.

The routine rides are to the same places, often same time / day of the week, and the same tearoom. They are ideal for reducing anxiety. I meet up with friends and find this very calming; I don’t have to think about how long it will take or even the route. I just float along, daydreaming and looking at the countryside.

I have about half a dozen routine routes from between 10 and 50 miles, primarily off road down the Basingstoke Canal and the River Wey. When I am in the right frame of mind, I deviate from the routine rides, for a bit of exploring to find new places.

The challenge rides are those that challenge me mentally and/or physically. The challenge ride can be simply a mileage goal for the week, the month or even the year. They can be based around routine rides but can give you a bit more incentive, particularly if you tell a few friends, as mine ask about my progress. Alternatively, it can be a distance challenge over new ground: coping with both the unknown as well as the physical exertion. As an example, this year I plan to do two rides; a North Downs Way, Downs Link, South Downs Way and Shipwrights Way loop, around 120 miles; and around 100 miles down the Kennet and Avon Canal.

However, I find the best challenge ride is one that is combined with a charity ride. It will encourage you to get out and train while you hopefully watch the donations coming in. I have done two charity cycle rides so far, the first was across the South Downs, for the British Heart Foundation and the second is for Pancreatic Cancer Action, which I am undertaking this year, and is equivalent to a quarter of the way around the Earth in one year – that’s 4,500 miles, primarily off road.

Most of my issues are with anxiety. The trouble with anxiety is that you do not always know you are suffering from it. In hindsight, I now realise I had been suffering from high levels of anxiety over many years. But when I was asked by my mental health carer if I was anxious, I often used to say that I wasn’t.

Little did I know that on a scale of one to ten I was probably at nine. When you are under a state of constant anxiety, which you may not detect, any stressful situation can tip you over the edge, even something quite menial, so it is important to know the early signs of a potential mental breakdown. If you find you are beginning to worry excessively about very small things, becoming neurotic, or easily unsettled with an inability to concentrate, then this could indicate the start of a more serious mental health issue.

But don’t despair. I was totally convinced I would never get better, and some friends later said they thought the same – but I did, and now I don’t even have to take any medication, which is great. So, for those of you who would probably struggle to even read this article, there is hope, and there is every chance you will get better and have a happy future. Just get out on your bike or go for walks. Initially, you may not enjoy it, and it may take time, but you can get there. Just do whatever helps you.

How cycling can improve your mental health View