Last winter, when rainstorms were queuing up to hit the UK, Cycling UK Vice President Josie Dew celebrated her 50th with a soggy 50-miler

As a Downs dweller, my original plan had been to spend a couple of days riding the 100-mile off-road route of the South Downs Way. But the day before my birthday, my two-year-old son Jack came down with a wheezy cough. As I didn’t like the idea of him waking up in the night and calling for me only to find I wasn’t there, I scaled down my idea to something I could ride in a day.

The Shipwrights Way in Hampshire is a fairly new cycling, walking, and horse-riding trail on a mixture of forest tracks, country lanes, boggy bridleways, and coastal paths. It traces the route taken by timber felled in Alice Holt Forest and hauled over the South Downs to Portsmouth’s dockyard to build the Tudor navy. Its length was just right: 50 miles for 50 years. There was even a personal connection: my husband Gary (a carpenter) is spending months at the dockyard helping to restore Nelson’s flagship, HMS Victory.

One problem was that I was born in early January, when days are short, dark and dank. And this winter was the wettest December in a century, with storms Desmond and Eva wreaking havoc. Oh well, mud, bogs and floods would add a bit of cycling excitement.

Ideally, I would have left at first light. But I had three children to deliver here and there first. Sleepy offspring were roused and breakfasted, then school bags, dinner boxes, helmets and gloves were gathered up. I cycled the girls (Daisy, 5, and Molly, 9) to school two-and-a-half miles away, then cycled back, cleared up, made the beds, hung up the washing, and hoovered, before finally climbing with Jack into Gary’s van for him to drive us to Bentley station, the start of the Shipwrights Way.

It had been raining hard all morning but en route to Bentley it became torrential. "Just a clearing-up shower!" Gary said cheerily as the rain hammered off the windscreen. It was cold as well, as I discovered when I got out of the van. I donned waterproof trousers, neck-warmer, under-helmet hat, and two jackets. "Happy birthday, Jose!" said Gary, shutting the van door to keep the heat in. 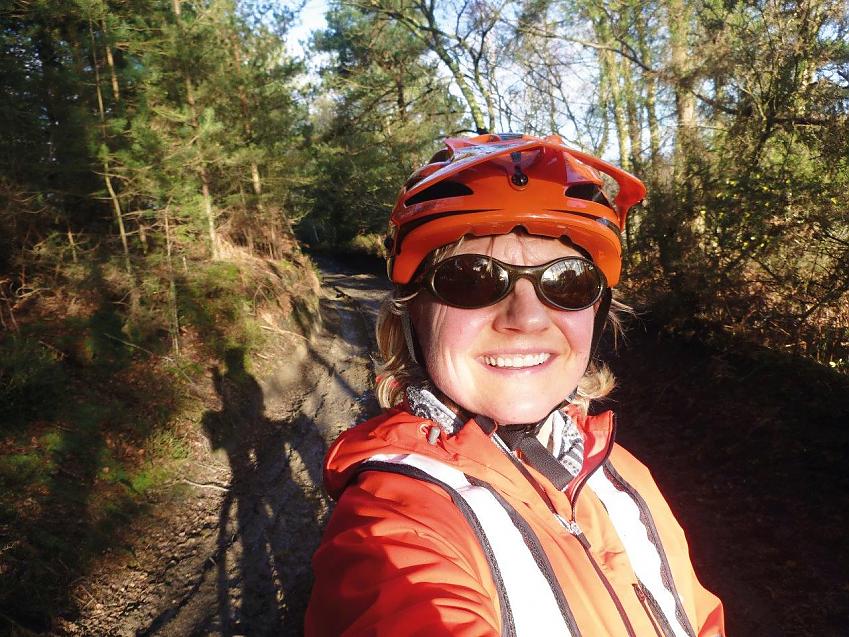 And then I was off, bumping cautiously across the unmanned, pedestrian level-crossing. The Shipwrights Way has about 20 stone sculptures dotted along its route, showing the history or wildlife of each area. Over the railway, I passed the first one: a stone butterfly. The butterfly conservation area I was passing through is apparently quite impressive – in summer.

A lovely wooded and muddy mile later, I arrived at the Alice Holt Forest Centre. Lo and behold, there was Gary, with Jack racing around on his balance bike. I spent half an hour playing pirates with Jack on the big wooden play ship, built to mark the start of the Shipwrights Way, after which the rain petered out. Jack was keen to tag along with me all the way to Portsmouth but I managed to persuade him to stay with his dad.

I looked at the time: 11:20am. It would be dark in five hours, and I had a lot of mud and floods to get through by then.

I sped off through the forest on wide gravel tracks, passing a pack of wheezing, mud-splattered cadets on a training run. The route was pleasantly undulating but then, approaching Headley Park, it became steadily more deep-mudded and deep-flooded. The ford on Cradle Lane was awash with muddy water so deep that even the footbridge was nigh-on submerged.

On through heathland and woodland, I passed a sculpture of a nightjar (since removed due to vandalism). The next one was a smug-looking natterjack toad sitting atop a pedestal in a wood near Lindford. I skirted Borden’s military training area and reached the Deer’s Hut pub at Griggs Green. Then I splodged through sloppy mud up over Weaver’s Down, where the sun burst out, offering a fine view of the Surrey Hills to the north and the South Downs to the south.

After emptying a pannier of its food, I sped across the line of the Chichester to Silchester Roman road until I came to a standstill at Langley: a small country lane was now a muddy river, with wavelets and floating branches.

The trouble with entering a flooded road on a bike is that you don’t know how deep it is until you’re in it (this one went over my shoes with every pedalling revolution) or what lies beneath the water (potholes, boulders, bodies, crocodiles…).

It was with huge relief that I emerged at the other side, still upright and alive. Dripping water, I then followed the bulging-banked River Rother to arrive at Liss, where I was born 50 years earlier.

The last of the daylight

Passing a charity shop, I spotted a toy garage in the window for £1.75. I could think of someone who would love this! I know a Fisher Price garage is not the most sensible addition to your kit on a race-against-fading-daylight cycling mission, but how could I say no? I bought a couple of DVDs too: Captain Pugwash and Mr Benn. Pleased with my purchases, I powered on to Petersfield and then Buriton.

In Queen Elizabeth Country Park, I encountered my first cyclist. He was riding a massively fat-tyred 29er mountain bike. He eyed my old Orbit Romany tourer with suspicion, especially when I overtook him on the next uphill humming the theme tune to Captain Pugwash.

I know a Fisher Price garage is not the most sensible addition to your kit on a race-against-fading-daylight bike ride, but how could I say no?"

A steep and muddily-rutted descent took me onto a quiet rural lane that was once the main road from Portsmouth to Petersfield. It would have been busy with stagecoaches. The only vehicle to pass me now was a shiny black 4×4, the driver chatting away on her phone. Just north of Finchdean at Idsworth, I ran across a field to visit the beautiful 11th century St Hubert’s church, whose murals date back to around 1330.

By the time I arrived in Havant, it was as good as dark. The wind got up and a hailstorm hit. As the Hayling Island ferry was out of service, I had to follow a path alongside the M27 in freezing rain before peeling off to Southsea and into Portsmouth.

By the time I arrived at Portsmouth Harbour railway station, my teeth were chattering and I had turned partially white due to the icy accumulations of hail that had settled in the folds of my clothing. It was a memorable end to a perfect, memorable birthday.

Distance: Nominally 55 miles. The school run and ride home from the station meant a total mileage of 71.

Conditions: Wet, muddy, flooded! Normally, it might just be a bit muddy.

Bike used: My 26in-wheel, 21-year-old Orbit Romany tourer, which is now fitted with a flat handlebar and my 30-year-old Shimano friction thumb-shifters. Semi-knobbly tyres got through the thick mud fine.

Maps: I printed out the maps from the website and followed the little round blue Shipwrights Way markers on signposts/fences, etc.

I’m glad I had: Left Molly and Daisy at school and Jack with Gary.

Next time I would: And I did! When the Hayling Island ferry was relaunched in August 2016, I rode to Buriton and retraced my tracks to Havant. Catching the ferry was much nicer than riding alongside the M27. 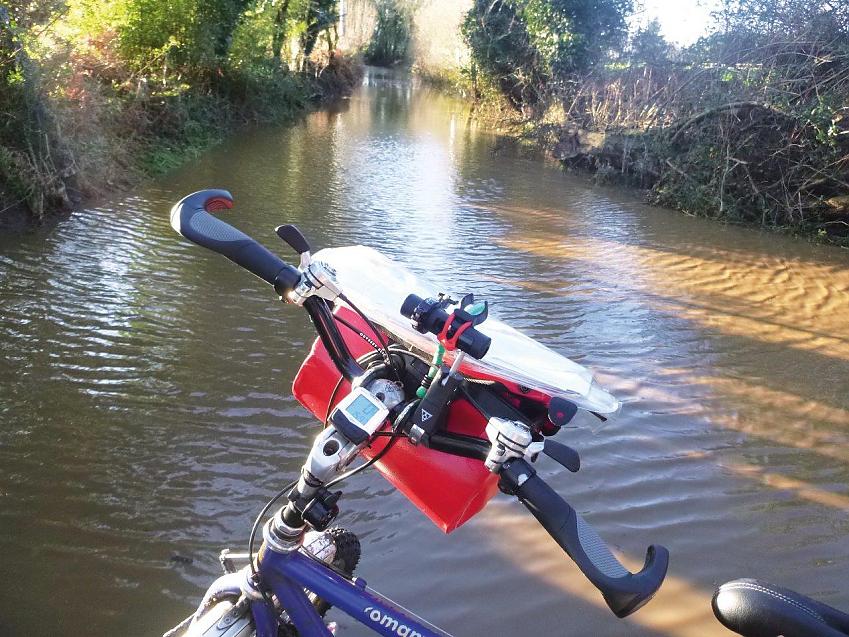 For the last 40 years, I have ridden a bike virtually every day. I was 10 when I first started to want to ride a bike all day, every day, which makes me 50. Fifty! That’s half a flipping century! Luckily, when I get on my bike, I still feel about 10.

When my 50th was fast approaching, friends asked: are you going to have a party? Others said: is Gary (my husband) going to whisk you away for a romantic weekend? What I fancied most, though, was to head off alone on my bike and to have my first child-free night in ten years. I love my three sproglets more than anything, but a little time alone on your wheels now and then is a good way to restore a bit of sanity.

Josie Dew's child-free Isle of Wight adventure View
You too can champion cycling in the UK
Give your support today to help Cycling UK’s charitable work tomorrow. We double every pound you give through other sources to help change lives and communities through cycling.
Volunteer now
Cycling UK continues to support the UK to cycle
This remains true during this difficult period with the ongoing threat of coronavirus Covid-19
Read our latest advice on cycling
Join Cycling UK to help us change lives and communities through cycling
Membership gives you peace of mind insurance, discounts in cycle shops, rides & routes
Join now