Cycling UK today (Wednesday, 16 March) announces its intention to launch a new long distance cycling route in Kent which will be ready for the public to ride from Kent Day on 26 May

Be the first to know about the Cantii Way

Called the Cantii Way, it is a 145-mile (234 km) route beginning and ending in the village of Wye, close to Ashford in Kent. It is designed to be ridden over three to four days in one go, but with regular train stations along its length could also be split up over several weekends.

The Cantii were an Iron Age Celtic tribe that Julius Caesar encountered on his abortive conquest of England in 54BCE. The famous Roman described the Cantii as “the most civilised” of the British tribes, and it is from them, the county of Kent and city of Canterbury both derive their names. 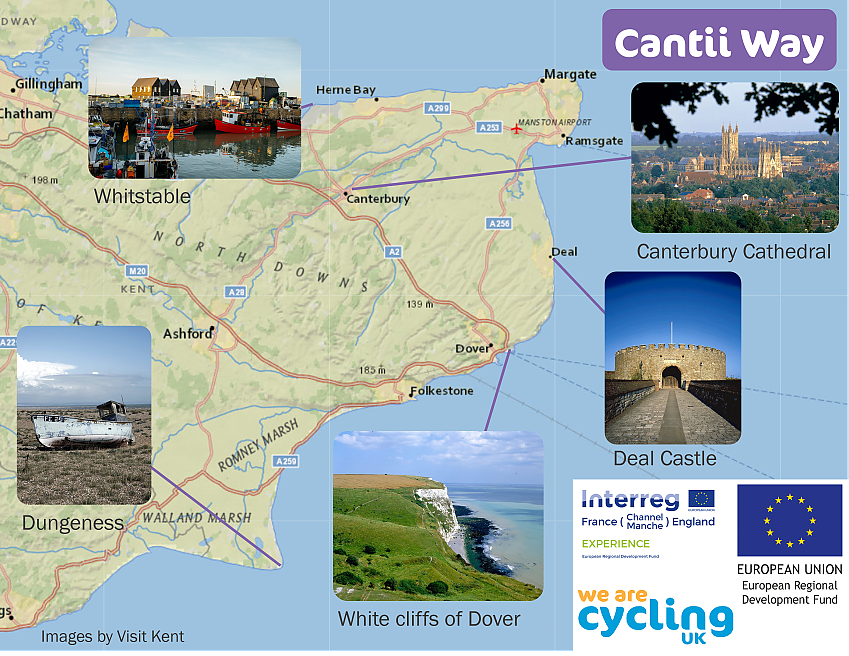 “Kent is rich in history, rich in culture and rich in cuisine – all of which make it a perfect destination for the cycling tourist. At Cycling UK we feel with the Cantii Way we’ve struck the right balance between each of these.”

Using a combination of quiet ways, country lanes, byways and bridleways the route is designed to be manageable by anyone of reasonable fitness on most types of bike. Using part of the North Downs Way Riders’ Route Cycling UK launched in 2018 in collaboration with Kent Downs AONB, the Cantii Way takes riders deep into Kent’s rich history, vibrant modern culture and natural beauty.

The route is also designed to open up the “garden of England” to the cycling traveller. As they pass through well-known destinations such as Canterbury, Whitstable, and Dover, there are plenty of opportunities to make the most of the local produce available, with the orchards, vineyards, hop-drying oast houses and local farms making the Cantii Way equal parts culinary and cycling tour. 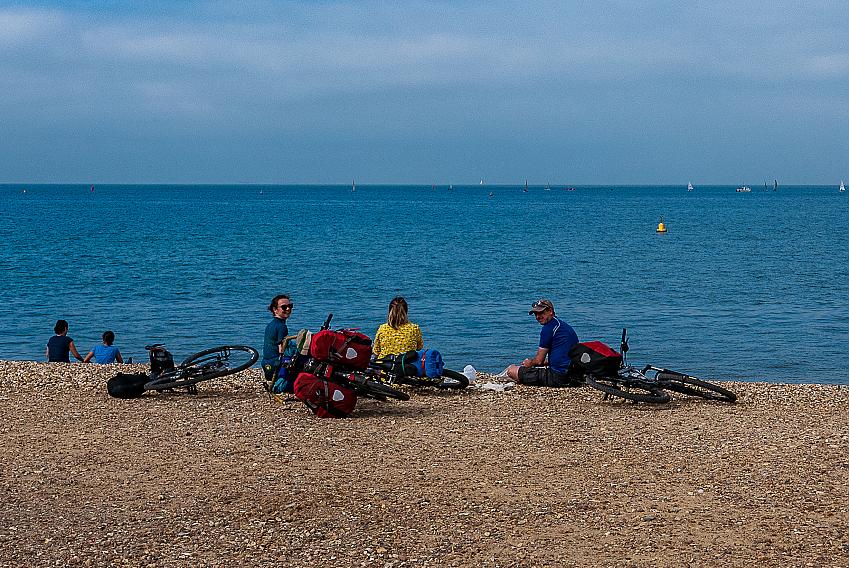 As part of its role in the European Regional Development Fund’s EXPERIENCE project which is operating in Cornwall, Kent and Norfolk as well as three other regions in France, the charity has worked for the past two years on the Cantii Way. During its development they have spoken with the council, Kent Downs AONB, landowners, local businesses and cyclists to link together a route which shows off the best of Kent.

“Routes like the Cantii Way aren’t just great fun to ride, but they also bring a real benefit to the local rural economy,” said Sophie Gordon. “The people cycling through Kent’s network of paths and quiet ways will quite literally be fuelling themselves from the local shops, pubs and tea rooms they pass through – and many of these will be off the beaten track.” 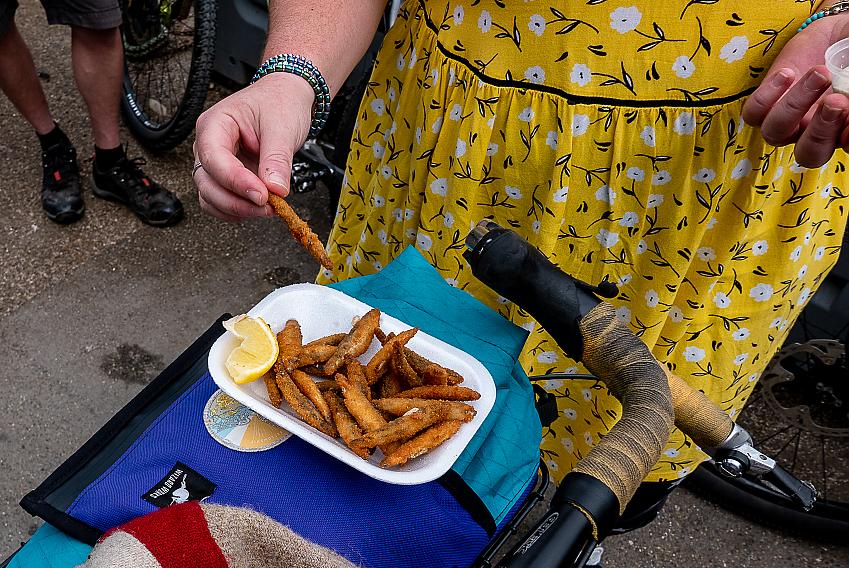 "The people cycling through Kent’s network of paths and quiet ways will quite literally be fuelling themselves from the local shops, pubs and tea rooms they pass," says Sophie Gordon. Photo Sam Jones

Cycle tourism spending from cyclists in the UK generates £520m per year. There are 1.23 million overnight trips each year, benefiting small businesses in particular, and these contribute £433m to the economy. A survey of riders of King Alfred’s Way, a route starting in Winchester which the charity launched in 2020, shows on average every cyclist spends £83.60 per day on food and accommodation.

In preparation of the expected increase in cycling over the summer, the charity is already working with the hospitality and accommodation sectors in Kent. Cycling UK is providing businesses with free equipment bundles worth up to £400 and advice as part of its Cycle Friendly Places initiative.

The new route is part of Cycling UK’s wider goal to see the creation of a network of long-distance off-road routes across the length and breadth of Great Britain, taking in its amazing places and wild landscapes.

The Cantii Way is the fifth long distance cycling route Cycling UK has launched since its riders’ route for the North Downs Way was unveiled in 2018. A sixth route will be launched at the end of summer in Norfolk.

In 2019, the charity launched the 800-mile Great North Trail which starts in the Peak District and finishes in either Cape Wrath or John o’ Groats. This was followed by King Alfred’s Way in 2020, a 220-mile loop route from Winchester that travels through 10,000 years’ worth of history in the south of England and ancient Saxon kingdom of Wessex, and last year saw the launch of the 150-mile West Kernow Way in Cornwall.

Be the first to know about the Cantii Way

For more information, please contact the national Cycling UK press office. Due to the restrictions caused by the coronavirus outbreak, currently the main press office number (01483 238 315) is not being monitored. If you would like to speak to a member of the press office during working hours (0900 - 1700) please email publicity@cyclinguk.org. Out of hours, call 07786 320 713

Can't wait for the Cantii Way? 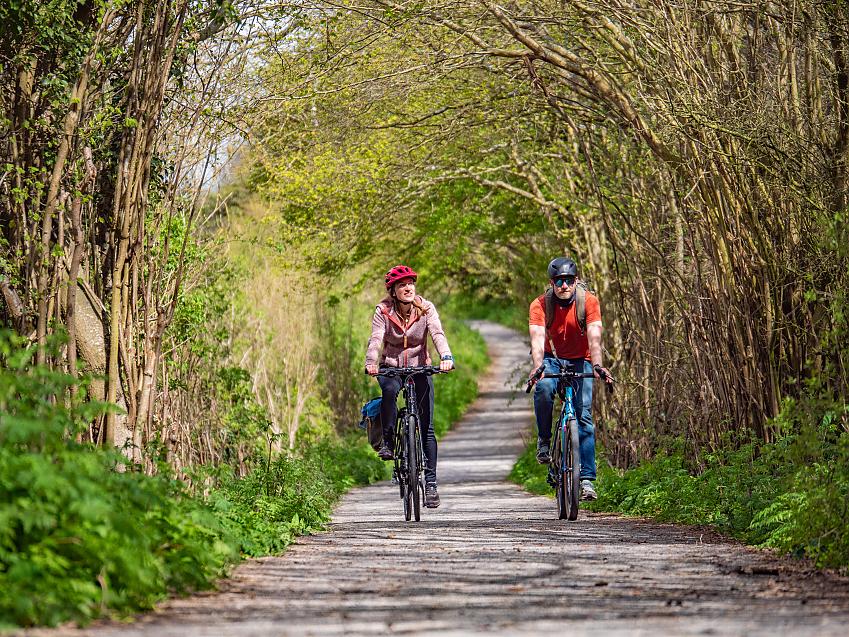 If you can't wait until the end of spring for your cycle touring adventure, why not try one of Cycling UK's other long distance routes and buy one of our guides?

All proceeds from the guides go back into supporting Cycling UK's work, which includes the creation of routes like the Cantii Way.