‘Be Nice, Say Hi’ Cycling UK and BHS guidance for cyclists and horses

‘Be Nice, Say Hi’ Cycling UK and BHS guidance for cyclists and horses

Cycling UK and The British Horse Society (BHS) have joined forces to launch a consideration and courtesy awareness message of ‘Be Nice, Say Hi’ to help cyclists and horse riders to pass safely

The new campaign message of ‘Be Nice, Say Hi’, available as a downloadable leaflet and two short videos, informs cyclists how to safely pass horse riders both on and off the road.

Horses can react quickly when startled, so the two charities are encouraging cyclists to drop their pace and call out a greeting, giving the horse and rider time to react before overtaking wide and slow. By alerting the rider and horse to their presence, cyclists run less risk of the horse reacting, and reduce the risk of injury – not just to the rider and their horse, but also themselves.

The collaboration between the two charities follows concern over viral video footage recorded at the Windsor Triathlon showing cyclists undertaking a horse and rider at high speed. This demonstrated the need for better advice for people cycling on how to overtake horses safely.

“Every time a cyclist encounters a horse, there are three brains involved: the cyclist’s, the rider’s and the horse’s. Many people aren’t familiar with horses, and there can be confusion on what they should do when overtaking on a bike. Cyclists may already know to pass wide and slow when it’s safe to do so – but they could still startle the horse unless the horse and rider are made aware of your presence.

“Generally, if a cyclist startles a horse, it is due to a simple lack of awareness that a horse needs more time to react, which is why Cycling UK is pleased to be helping the BHS promote the consideration and courtesy message of ‘Be Nice, Say Hi’.”

Generally, if a cyclist startles a horse, it is due to simple lack of awareness that a horse needs more time to react

Director of Safety for the BHS, Alan Hiscox said:

“We’re thrilled to be collaborating with Cycling UK as both groups are vulnerable road users and will benefit from working together to share the roads. We are encouraging riders to respond positively to cyclists who pass with consideration and reciprocate their courtesy.

“Horses are flight animals and may react to anything they are unsure of. By promoting the ‘Be Nice, Say Hi’ message, we hope more cyclists will appreciate the potential risk they pose. If all road users are considerate and mindful of one another we can reduce the number of incidents between horses, cyclists and vehicles.” 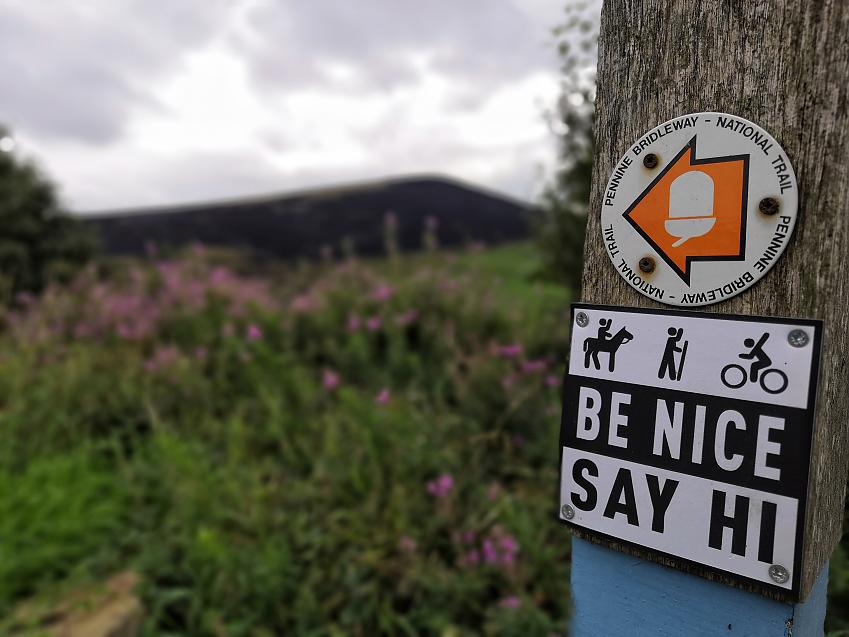 The ‘Be Nice, Say Hi’ message grew from the work of mountain bike enthusiasts, including OpenMTB, Ride Sheffield and Peak District MTB, to improve relationships between trail users, and is now endorsed by both charities.

‘Be Nice, Say Hi’ badges are already in place along parts of the Pennine bridleway, and there are plans for the signs to go up in the Surrey Hills and other areas in the near future.

The ‘Be Nice, Say Hi’ sign was created by Mark Etherington of design studio NoMoreDull.

Where did the idea for Be Nice, Say Hi come from? View

I am glad that horses are well looked after in this place. But in the modern world, we often encounter cruelty to animals, and you can see this on this resource. I hope that this problem will become known to the public and we will deal with it.