Horse riders and cyclists encouraged to 'Be Nice, Say Hi' in the Surrey Hills

Horse riders and cyclists encouraged to 'Be Nice, Say Hi' in the Surrey Hills

Visitors to the Surrey Hills are being encouraged to ‘Be Nice, Say Hi’, as the Surrey Hills Area of Outstanding Natural Beauty (AONB) adopts the joint campaign by Cycling UK and The British Horse Society.

The two charities joined forces to launch a consideration and courtesy awareness message of ‘Be Nice, Say Hi’ to help cyclists and horse riders to pass safely last summer, as they believed better advice was needed for people cycling to understand how to overtake horses safely.

“The Surrey Hills Area of Outstanding Natural Beauty (AONB) is the first area in the South East to take up the initiative. The campaign is particularly relevant in the Surrey Hills due to proximity to London and increased recreational pressures.

“We are thrilled to be collaborating with Cycling UK and the British Horse Society to raise awareness of shared access in our landscape and respecting the rights of all users.”

Lovers of the outdoors will soon notice the discreet message of “Be Nice, Say Hi” appearing on signposts across the region, however for more detailed information the charities have produced a downloadable leaflet and two short films. 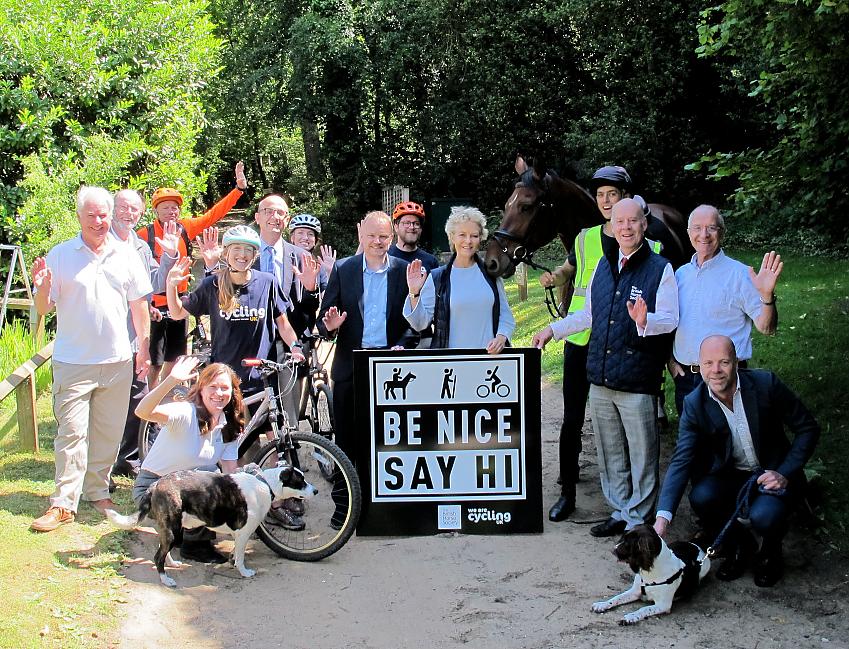 Cyclists, horse riders, Surrey Hill AONB and more gather to celebrate the launch of 'Be Nice, Say Hi' in Surrey.

“Every time a cyclist encounters a horse, there are three brains involved: the cyclist’s, the rider’s and the horse’s. Many people aren’t familiar with horses, and there can be confusion on what they should do when overtaking on a bike. Cyclists may already know to pass wide and slow when it’s safe to do so – but they could still startle the horse unless the horse and rider are made aware of your presence.

“Generally, if a cyclist startles a horse, it is due to simple lack of awareness that a horse needs more time to react. This is why Cycling UK is pleased to be helping the BHS promote the consideration and courtesy message of ’Be Nice, Say Hi’ and is delighted to see it adopted in the Surrey Hills.”

Horses can react quickly when startled, so the two charities are encouraging cyclists to drop their pace and call out a greeting, giving the horse and rider time to react before overtaking wide and slow. By alerting the rider and horse to their presence, cyclists run less risk of the horse reacting, and reduce the risk of injury - not just to the rider and their horse, but also themselves.

Watch the video for roads

“We are thrilled to see the Surrey Hills Area of Outstanding Beauty (AONB) adopt the ‘Be Nice, Say Hi’ initiative. As vulnerable road users, horse riders, carriage drivers and cyclists face considerable dangers on our roads and the need for safer off road riding opportunities has never been greater.

“By promoting the courtesy and awareness message of ‘Be Nice, Say Hi’ in the Surrey Hills (AONB) we hope that more riders and cyclists will have the confidence to pass one another comfortably and safely.”

The first sign was symbolically put up close to Mane Chance Sanctuary in Compton, Surrey. Founding trustee and actor Jenny Seagrove was pleased to see the campaign gaining traction in the area. She said:

“I am delighted to be a part of this initiative in Surrey and hope to see it taken up across the country. The welfare of horses is at the very heart of what we do at Mane Chance Sanctuary and I think the ‘Be Nice, Say Hi’ campaign should be applauded for considering the needs of both horses and humans as they share our beautiful countryside.”

Watch the video for off-road trails

Where did the idea for Be Nice, Say Hi come from? View