Mist swirled around the ruined mine building. As we approached, we could hear an eerie sound of singing echoing through the stones. The ghosts of workers lost in the mines? A local choir’s socially-distanced outdoor rehearsal? It turned out be an environmental campaign group enjoying a break – and a few verses – while walking to the G7 summit in Carbis Bay. We wished them well on their journey as we continued ours.

Cycling – and cycle touring in particular – isn’t just about the riding. What makes a trip special is the people you’re with, the interesting places you discover along the way, and those memorable moments that happen off the bike. That’s what we want to celebrate with the West Kernow Way, a new route Cycling UK has developed around the western tip of Cornwall.

Part of the European Regional Development Fund EXPERIENCE project to extend the visitor season, the West Kernow Way lets you dig a bit deeper than the beaches and ice creams of childhood holidays and explore the unique landscapes, history and culture of this part of Britain. We’ve woven together paths less travelled to create a trail with a mix of coast and moorland, gravel tracks and quiet winding lanes, secluded coves and wooded bridleways.

In June, I was test riding the route alongside colleague Sam Jones and cycling journalists Katherine Moore, Rob Penn and Vedangi Kulkarni, plus Stefan Amato and Jordan Gibbons from Pannier who took charge of the logistics and photography. The trip opened our eyes to the fantastic riding there is in the area, both on and off-road, and the wealth of hidden stories just waiting to be discovered. 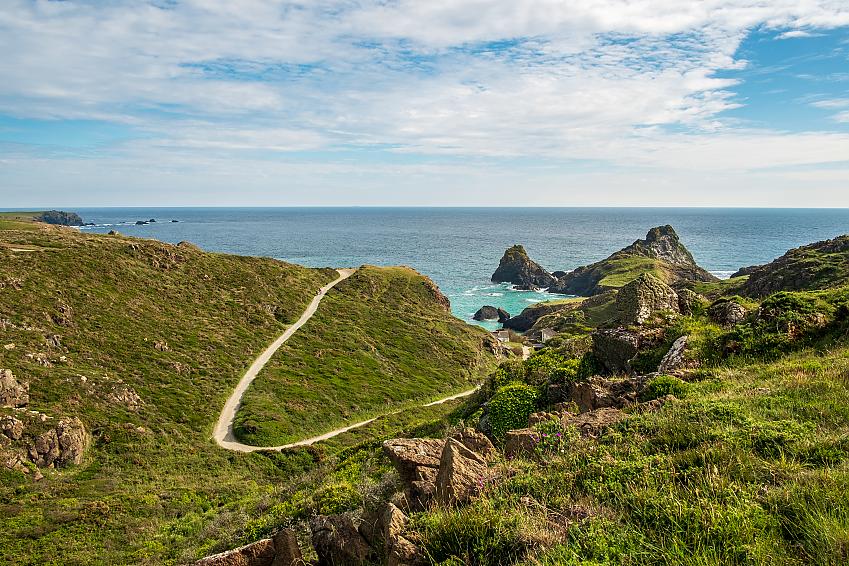 Despite the world’s rich and powerful congregating in Cornwall for the G7 summit this summer, it didn’t take us long to feel like we’d escaped it all. Rolling out of Penzance and through the pretty harbour of Mousehole, we soon ducked into quiet, narrow lanes with banks bursting with ferns and wildflowers. The steep climb up from the sea reminded us what we’d let ourselves in for.

Brutal gradients were a common feature along the route, and a good test of how quickly we could change gears whenever we turned a corner to be faced with yet another. We were lucky to have additional help in the form of some fantastic Specialized e-gravel bikes that we were testing out. They didn’t exactly flatten the climbs but it was hugely satisfying to be able to ride all the way up a 22% gradient rather than pushing.

Our efforts were repaid with constantly changing views of west Cornwall’s rugged coastline. In the stunning Cot Valley, we were met by a wonderful lady with a picnic hamper. Stef from Pannier had arranged for us to sample an amazing homemade lunch using locally-foraged ingredients, with delicacies including vegetable sushi, elderflower cordial, and nettle and lemon cupcakes. It was fascinating hearing about the variety of edible plants that can be found if you know where to look, and a shame we didn’t have time to have a go ourselves.

Refreshed, we continued on spectacular coastal gravel tracks around the tip of Cape Cornwall and along the Tin Coast. It’s hard to imagine that the weather-beaten stone ruins perched on the cliffs of this UNESCO World Heritage Site were once hives of activity, thronging with people and horse-drawn carts. The rich tin deposits in this area made it important for traders even in ancient times, and during the industrial era the knowledge of Cornish engineers and miners was sought after in other mining areas across the world. (That’s why you get entries from South America, Russia and even Australia in the annual Cornish pasty championships!) 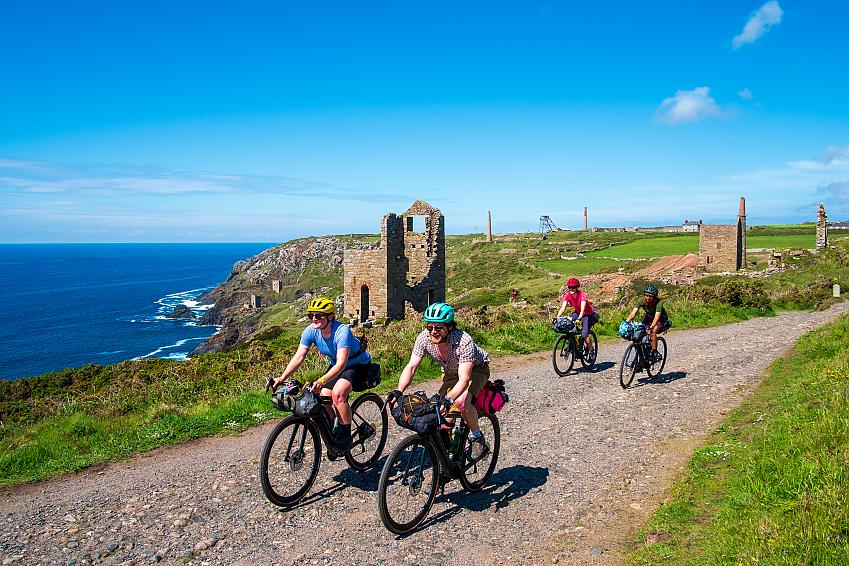 Landscape and history both changed as we turned inland across the Penwith Moors. An isolated track stretched into the distance, connecting stone circles and Bronze Age monuments. It felt timeless. Now known as the Tinners Way, it has been travelled for millennia as a through-route between St Just and St Ives. The route even appears on one of the first detailed maps from 1699.

Despite its historical significance, the Tinners Way is not fully recorded as a public right of way. On modern maps, it’s shown in some parts as a footpath and in others as an unclassified track. Based on historical evidence from maps spanning 250 years, Cycling UK has submitted an application for the route to be fully recorded as a restricted byway so that it can once again be travelled by horses and carts – and also cyclists.

It’s one of several ‘lost ways’ included in the West Kernow Way. Because the bridleway network in Cornwall is so fragmented, some sections were challenging to link up. We’ve delved into the archives and identified routes that have strong evidence for being used as a bridleway or byway in the past. These routes may be currently shown as footpaths but the right to ride on them still exists.

The problem is that the system for processing these applications to correct the map is complex and unwieldy; Cornwall Council has a backlog of around 16 years to go through. It’s clear the current system isn’t working: it shouldn’t take decades to upgrade one right of way. That’s why, where there’s evidenced historic rights, we have included these sections on the West Kernow Way.

When we joined the Tinners Way it was a wide cart track. As we continued to the eastern side of the moor, it began to feel more like a long-lost route, narrowing to a slippery rut between gorse bushes. We were relieved to emerge battle-scarred on the other side. 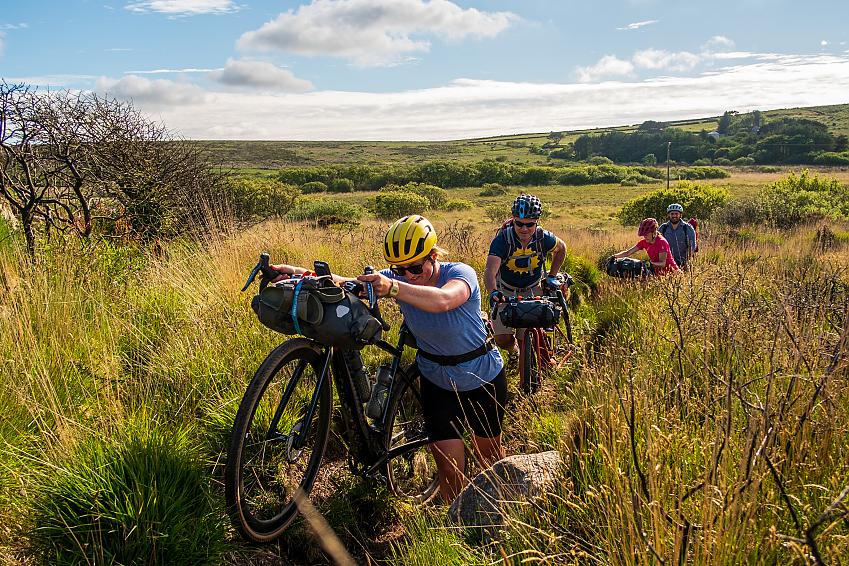 The following day we left the Penwith Peninsula behind and headed over to the Lizard Peninsula, past several Iron Age hill forts. A wonderful cruise along a coastal lane, with views stretching out towards Lizard Point, took us to Porthleven, where we had some of the biggest pasties I’ve ever seen.

We had time to digest them while we crossed the impressive Loe Bar, a sandbank that separates the Loe lagoon from the sea. The deep sand reduced us to plodding across on foot, pushing our reluctant bikes towards firmer ground.

Back on the bikes, a string of scenic coves followed. We plummeted into them and winched our way out again. Then we reached the Lizard National Nature Reserve. This tranquil heathland supports a diverse mix of rare plant species and valuable wildlife habitats. We’ve worked with the National Trust and Natural England to agree a permissive route across the heathland using resilient paths, to help protect the more sensitive areas.

The Nature Reserve is a great place for birdwatching – to the excitement of our group’s twitcher, Katherine Moore (of Unpaved Podcast). She’d even found space in her bag for some mini binoculars.

We managed to squeeze in a sunset dip at Kennack Sands before picking up the pace to reach the pub before it stopped serving food. We made it just in time and feasted on freshly caught mussels. 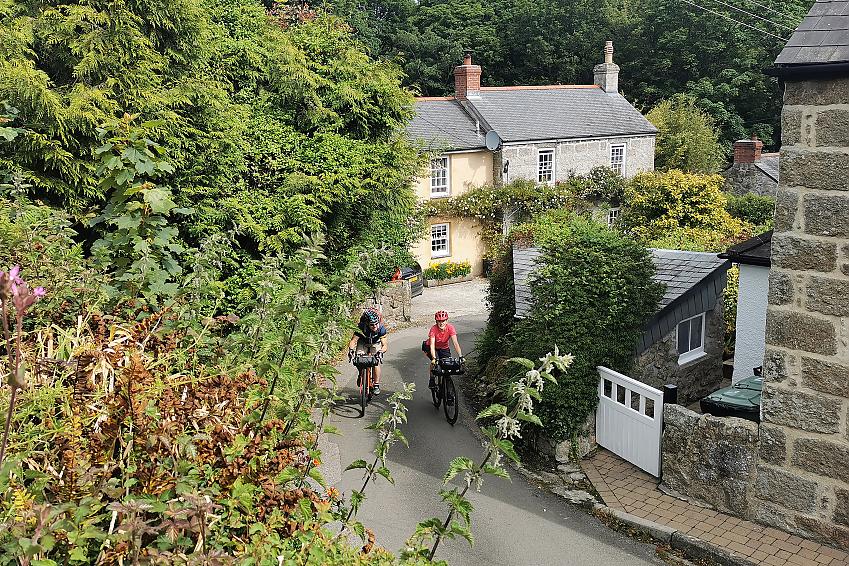 The final day dawned grey and drizzly, a testament to Cornwall’s ever-changing coastal weather. We had chosen to take the optional route crossing the Helford River by tiny passenger ferry. We just about squeezed in three people and bikes each time, making two separate trips. The boat felt slightly lopsided, but the ferryman cheerfully informed us he’d never managed to tip it over, despite trying on purpose several times. We couldn’t decide whether or not to feel reassured by that.

Due to time constraints we had also opted for the shorter version of the route, cutting across south of Redruth rather than looping around the town to the north coast. This section took us onto the Great Flat Lode Trail, one of a network of old mining tramway trails that crisscross the area. Remnants of the area’s industrial past looked spooky and atmospheric in the mist. Carn Brea Castle, with its peculiar structure half built onto a craggy rock stack, seemed straight out of a fantasy film.

On paper the return leg, crossing inland from Redruth to Marazion, looked like a less exciting part of the route. Yet it didn’t disappoint. Cycling UK’s off-road consultant, Kieran Foster, has done a fantastic job in stitching together a patchwork of trails, tracks and swooping lanes into a route that reveals something new at every turn. 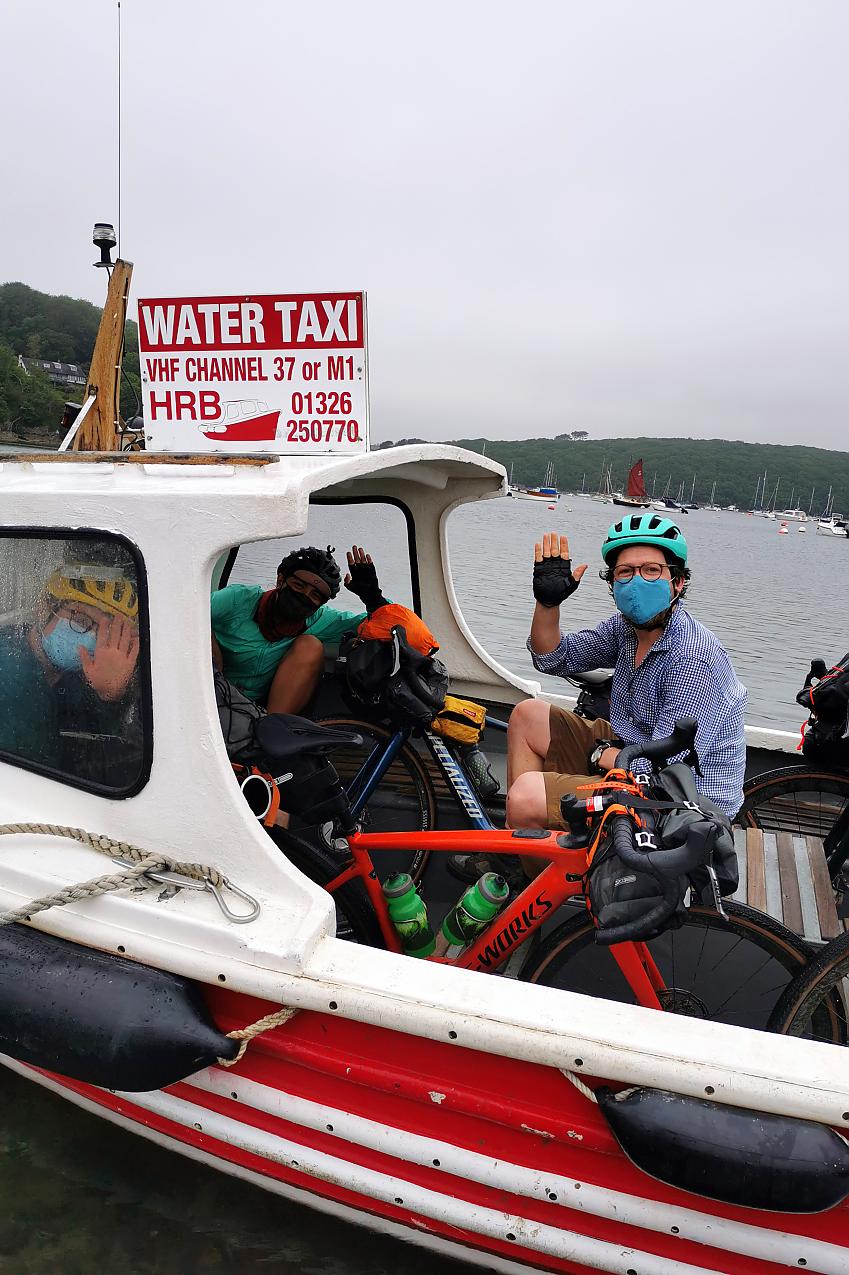 It all went swimmingly

When we rolled into the finish point at Marazion the tide was in, so we couldn’t ride along the causeway to St Michael’s Mount. Luckily we had our own special end to the ride already planned: a stop at the Jubilee Pool in Penzance.

The bracing salt water was the perfect tonic to soothe muscles aching from all the climbs, but the real treat came in the form of a new geothermal pool, which is heated to a toasty 30-35°C by a 410m-deep geothermal well. The lido now opens all year round with ‘geo and dine’ evenings in the winter. It’s a creative way to encourage off-season tourism.

As we lounged in the salty water, we reflected on the past few days. There was no denying it had been tough, but we’d been rewarded many times over with spectacular views, fantastic trails, and memorable experiences.

Funding: how the route came to be

As one of 14 partners on the EXPERIENCE project, Cycling UK is working to deliver sustainable new off-season tourism experiences by developing cycle hub locations, off-season events, and promoted routes. We’re also supporting businesses to attract cyclists with the Cycle Friendly Places accreditation. As well as the West Kernow Way, we’ll also be creating long-distance routes in Kent and Norfolk.

The €23.3 million project is co-financed by the European Regional Development Fund (ERDF, €16 million) through the Interreg VA France (Channel) England Programme 2014-2020, and aims to boost visitor numbers in six pilot regions including Cornwall, Norfolk and Kent.

Distance: The full route is 147 miles. Our shorter version was 140 miles over three days.

Route: Figure-of-eight starting from Penzance, looping around the west coast then down to Lizard Point. Up towards Redruth, then south-west to Marazion.

Conditions: Sun for the first two days and rain the third. A mix of gravel tracks, moorland singletrack, bridleways, and quiet lanes. A couple of parts were very muddy.

Bikes: We were lucky to be able to test ride some Specialized Turbo Creo e-gravel bikes, which were a huge help on the climbs yet light enough to push or carry. Any gravel bike or hardtail mountain bike would work well.

I’m glad I had…the company of bird and plant enthusiasts Katherine and Rob, who were full of interesting facts about the area’s unique ecology.

Next time I would…allow more time to explore the beautiful coves we passed through, and include the loop to Portreath that we missed.