Transporting a tandem for a tour is easier when it packs smaller. Cycle magazine's technical editor, Richard Hallett reviews two that do: a Circe Cycles Eos and a Thorn Raven Twin Mk3

Radically different in design and construction they may be, but the two tandems on test here offer surprisingly similar riding experiences: stable at speed, comfortable, equipped for serious touring duty, and fitted with brakes and gears suitable for challenging roads.

They also feature frames that can be taken apart for storage or convenient transportation – in effect, addressing the primary checklist of a tandem owner’s requirements.

Of the two, the Thorn is by some margin the more conventional, and will appeal to many potential buyers on this basis alone. Built with beefily TIG-welded, heat-treated, Japanese-made ‘mega-oversized’ cro-moly steel tubes, its classic ‘direct lateral’ frame has a central frame spar running from the middle of the head tube to the junction of the seat tube and ‘drainpipe’ bottom tube, offering an excellent combination of torsional and vertical stiffness at a very acceptable weight.

Size L/M gets a ‘double marathon’-style frame, with a second central spar running between the seat tubes and below the stoker’s top tube to a pair of secondary seatstays, adding useful stiffness to a large structure potentially carrying a lot of weight. 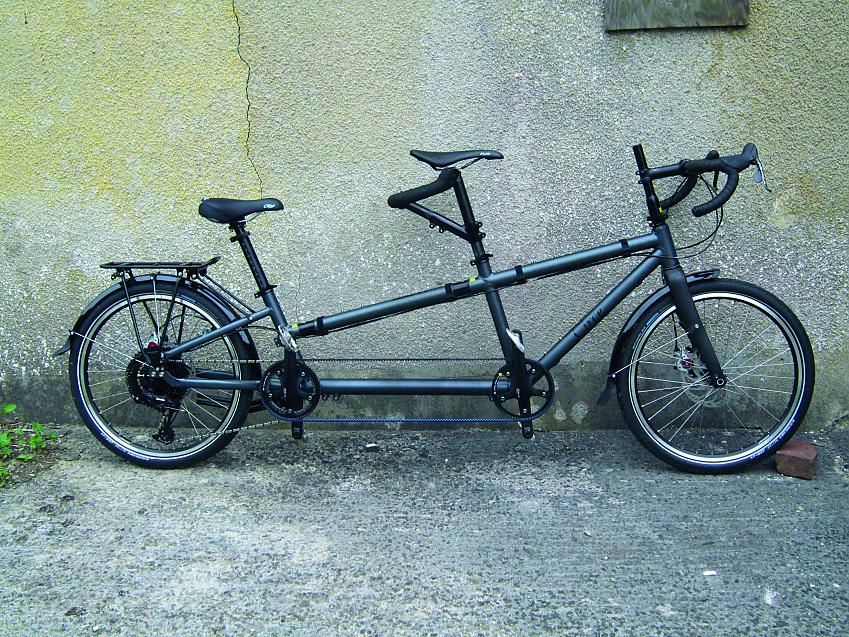 First look: One-size-fits-all touring tandem that packs into a couple of cases for transport. Takes 24in or 26in wheels

All Raven Twins come with S&S frame couplers as standard. The frame design necessitates the use of three of the couplers, which are sited forward of the captain’s seat tube. The frame therefore separates within the front triangle, some way forward of the machine’s mid-point.

This, according to Thorn, leaves the main section shorter than a regular bicycle with its wheels fitted. It’s not exactly ‘suitcase-ready’ – it won’t fit in an S&S case or similar – but it’s small enough to be fairly manageable and to fit in a solo cycle-sized space. The other advantage of this layout is that it leaves the transmission, including the timing chain, undisturbed; there's no need to faff about with oily components.

Circe’s Eos could hardly be more different, although its frame is also TIG-welded. The material is high-strength 7005 aluminium alloy, while the structural solution chosen is very large diameter tubes – two of them, as there’s no central spar. So effective are the two tubes that the frame can be exceptionally low-slung, especially at the rear, without compromising on vital torsional stiffness or load capacity, although there’s a maximum stoker weight of 80kg.

The Circe is versatile and adaptable, and its low standover heights make dismounts easier for shorter riders

If not as gracefully proportioned as the Thorn, the Circe is highly versatile and adaptable, and its low standover heights make dismounts easier for shorter riders. Large-diameter seatposts, secured by quick-release clamps, provide sufficient  stiffness for heavier riders.

Incorporated into the frame is Circe’s ‘separable system’, an optional extra adding £600 to the cost of the machine. Removable tubes replace the two main spars in the stoker section and allow the Eos to be packed into a couple of bags or small cases for transport. Although it employs four clamped joints, the assembled frame feels impressively flex-free. The system can be retro-fitted by Circe, albeit at a higher cost than if fitted on initial purchase. 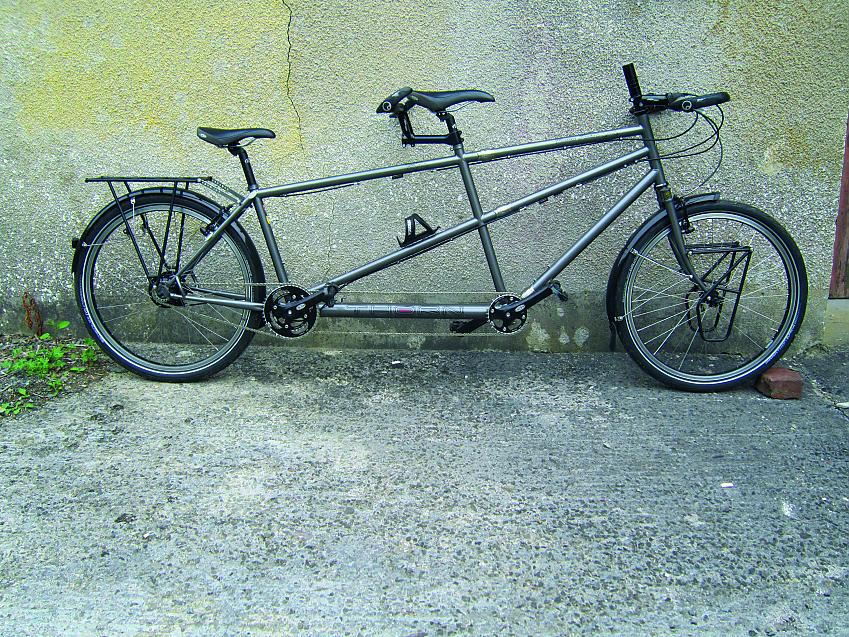 Where Thorn opt on this build for a sturdy all-steel fork with twin-plate crown, Reynolds tandem-spec blades, and cantilever brake bosses, the Eos has a massive carbon fibre disc-only fork developed by Circe specifically for tandem use and able to take a low-rider front rack. With this and a rear pannier rack, carrying capacity is considerable, while the load is kept low thanks to small, 24in wheels.

Disc brake-equipped as standard but with bosses on the seatstays for cantilevers or V-brakes, the Eos can be fitted with either 26in (ISO 559 ISO) or 24in (507) wheels. Narrow 28mm tyres are fitted to the 26in wheels for more athletic riding, while the 24in wheels of the test machine are fitted with fat 47mm tyres for the comfort and durability required for touring.

While the Raven will also, in theory, accept more than one wheel size, this in practice requires Thorn’s alternative fork for the Raven – a disc brake-specific unicrown design, which has exceptionally rigid heavy-duty legs designed for the stresses involved with discs. If fitted with this fork, and with discs front and rear, the Raven can be ordered with 26in (559), 650B (584) or 700C (622) wheels.

Thorn's sales brochure makes clear that the company feels linear-pull V-brakes offer not only ample braking capacity but the optimum combination of power, ride comfort (thanks to more resilient fork legs), and mechanical simplicity. So they do. Despite the favourable brake torque ratio afforded by its 203mm rotors and small wheels, the Eos doesn’t pull up any more smartly than the Thorn.

Left: The Circe Eos' belt drive at the front is silent in use and enables disassembly without making your hands oily. Right: The Circe Eos' large diameter aluminium tubing means ample frame stiffness without a diagonal bracing tube

Nor does the Eos shift gear ratios quite as niftily, although the SRAM 11-speed transmission – with Jtek cable adapter to get the right-hand Apex Double Tap dual-control lever and 12-speed Eagle rear mech working nicely together over the enormous SunRace cassette – has no issues anywhere in its range.

The Thorn’s Rohloff Speedhub, however, changes gear instantly at a standstill and under load when moving, giving it a slight edge, especially on a steep gradient.

There’s also a gear indicator for the Rohloff, whereas checking gear choice on the Eos requires a backwards, not always revealing, glance. The Thorn’s 14 gear ratios are closer spaced, while those on the Circe involve considerable jumps,  and the Thorn has a slightly higher top gear and lower bottom.

Indeed, the Raven’s Rohloff hub would win the comparison handsomely but for a whining sound, accompanied by slight vibration, in several of the lower gears. This is said to lessen with miles covered as the internal gear teeth ‘run in’, but might prove irritating on a long climb.

The Circe’s transmission, on the other hand, runs noiselessly and amazingly smoothly, thanks in part to its Gates Carbon Drive timing belt. Although under high tension, as required with these belts, there is little sensation of drag or stretch  even under hard pedalling. It’s the most impressive belt installation I’ve used.

It also means there’s no filthy chain or chainrings to handle when taking the separable system apart, and the belt, which does not have to pass though a frame  loop, can be easily removed and stuffed in a bag for transport.

Left: The Thorn's removable V-brake bosses. The Raven frame has disc brake mounts if that's what you prefer. Right: The Thorn's twin-plate-crown steel fork is sturdy and resilient but V-brake only. A disc fork is an option, however

Using in each case a transmission with a single ‘front’ chainring, both tandems have the timing and rear drives on the same side, avoiding the need to take the captain’s effort through the rear bottom bracket axle. Not only does this greatly  increase the longevity of the rear axle and its bearings, there’s a notable improvement to the directness of the drive. A crossover transmission can feel soggy as the rear axle twists under load.

Adjusted tightly (as supplied for the test), the Raven’s timing and main drive chains offered the same impressive directness, aided no doubt by Thorn’s informed choice of crank lengths. Many tandem pairings find it difficult to pedal smoothly  together at a high cadence, especially where the stoker is smaller.

Fitting longer cranks up front should slow the captain’s preferred cadence and should make it easier for both riders to find a mutually comfortable speed. Furthermore,  climbing on a tandem can involve hard low-cadence work, where longer cranks may assist the usually stronger captain. The Circe wears 170mm cranks front and rear, which will no doubt suit some pairings.

Last of the obvious differences is front handlebar shape: the Thorn’s flat bar, fitted with Ergon grips and extensions, is comfortable to hold but may not provide the variety of hand positions desired by some riders. The flared drop bar of the Eos gives variety but won’t suit those who, like me, find such bars wider than wanted when on the drops. The latter are more easily swapped, not least because there aren’t many drop handlebar brake lever options for V-brakes or shifter  options for the Rohloff hub.

Neither of these two impressive machines has a real weakness, both rolling quickly and steering at any speed with aplomb. The Raven’s saddles better suited me and my wife, while the Circe’s low rear standover meant an easier dismount for my 5ft (1.53m) stoker.

Four grand is a hefty wedge to spend on a bicycle, even built for two, but both tandems here offer a specification and performance to match their price tags. Aimed at the touring market, they each feature: a wide gearing range; wide,  comfortable and durable tyres and wheelsets; effective brakes; and a separable frame that makes for easier storage and transport.

Circe’s version packs smaller and, along with the one-size, hugely adjustable design, can be made to suit a wide variety of riders. Thorn’s less compact offering has more of a traditional, bespoke look, plus a wider-ranged – and potentially  tougher – transmission. (Note that the Eos is also available with Rohloff gearing.)

Touring/all-roads tandem with a huge range of options. Has a TIGwelded steel frame and 650B wheels. 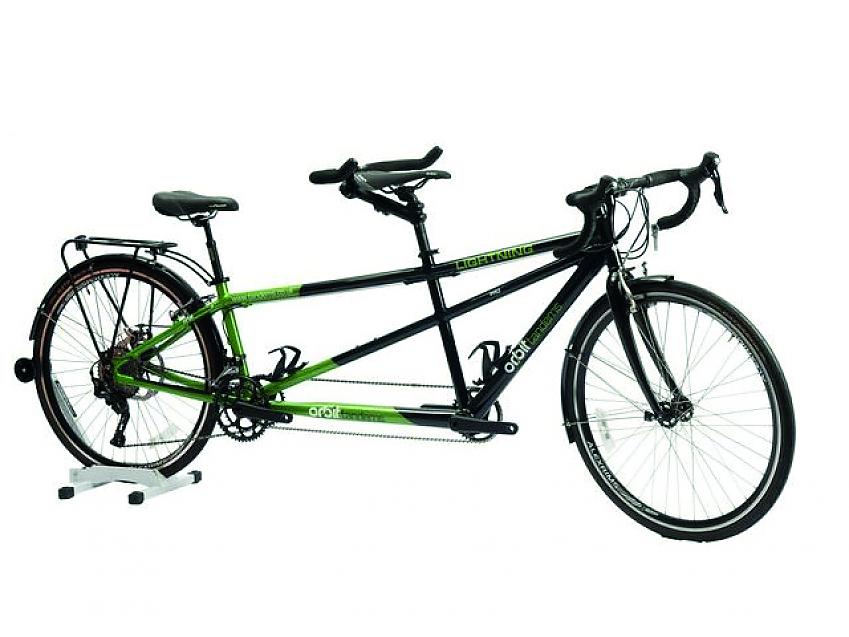 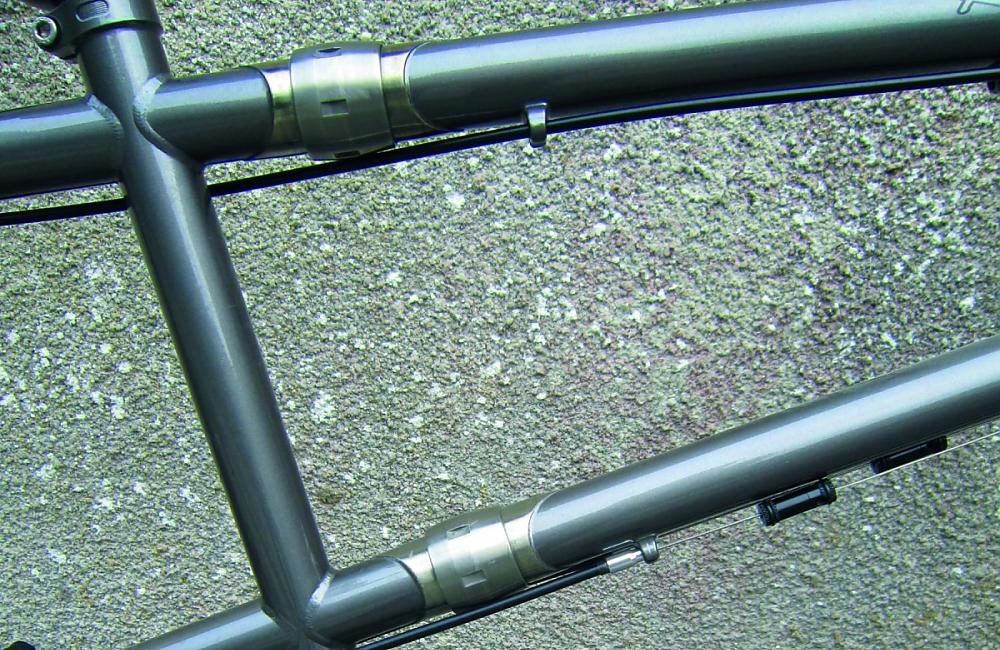 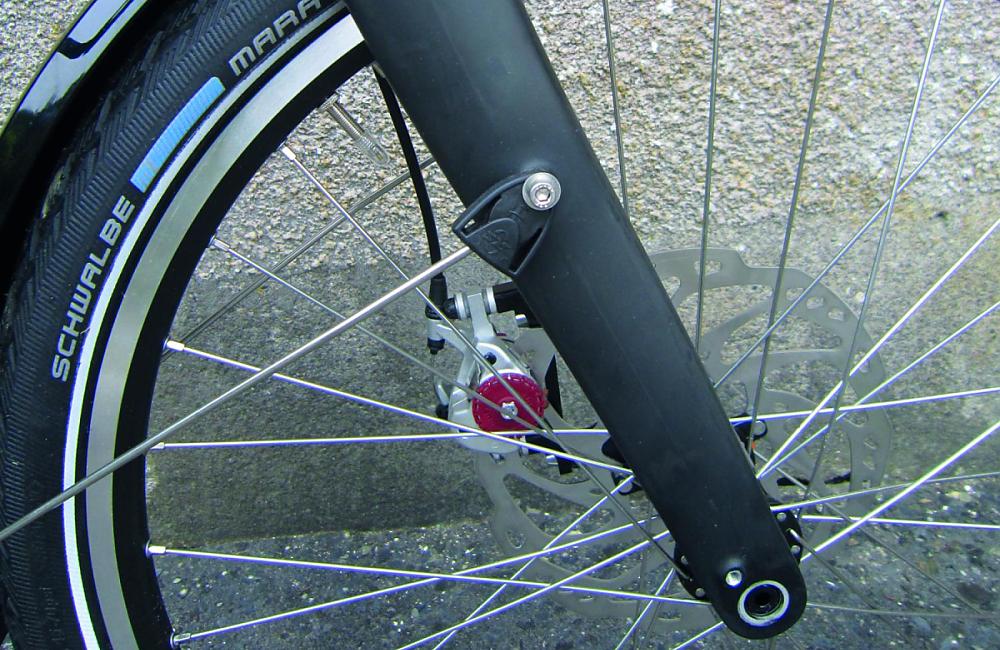 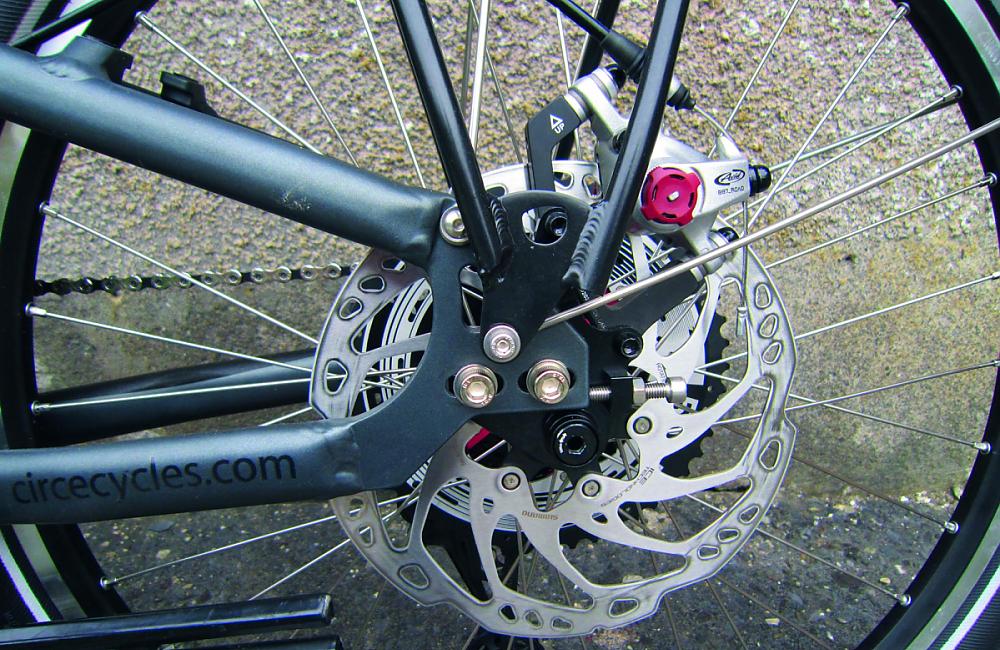 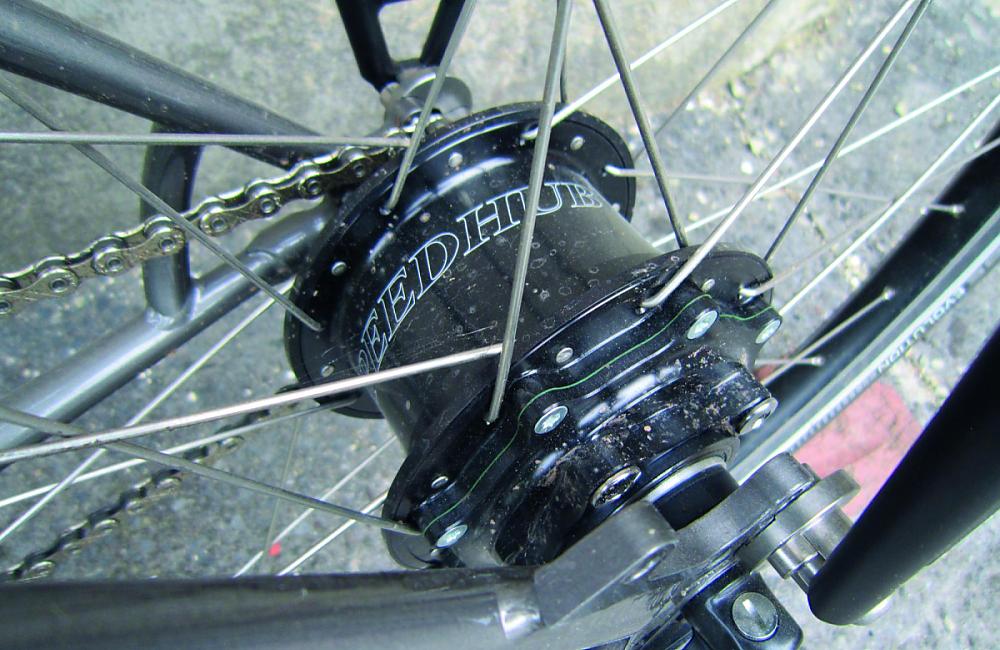 At Cycle, we are proudly independent. There’s no pressure to please advertisers as we’re funded by your membership. Our product reviews aren’t press releases; they’re written by experienced cyclists after thorough testing. This test featured in the October/November 2020 edition of Cycle magazine.