Acouple of years ago I saw a post on my local chat group from Merton Sports and Social Club for the Visually Impaired, who were looking for front riders to pilot tandems with blind and partially sighted rear riders (stokers). I was recently retired and wanted something useful to do with my time. As a lifelong cyclist and a qualified bike mechanic, it seemed perfect. I called the number and agreed to join the next ride on my solo bike.

It was a cold November day, but despite the conditions, everyone was very friendly and upbeat. The main organisers were Richard and Terry. Terry, who is visually impaired, gave me a brief rundown on how to be a useful companion for someone with limited vision. We were then off to Kent and our refreshment stop near Biggin Hill. The route was hilly, the lunch was good, and I went home thinking this could be fun.

Before the next ride I had my first go on a tandem. The difficult bits were starting, stopping, and dealing with traffic. I was also aware of my responsibility for the safety and wellbeing of the person on the back. Still, I must have done okay, as Terry, who had courageously ridden with me, proclaimed I was good to go.

My first proper ride as a pilot was quite an intense experience. I had to concentrate to ensure I coordinated with my stoker, managed the traffic, and didn’t fall over when we stopped! When we got to our refreshment stop, I had to consider my stoker’s needs, guide her to a table, ensure she knew what was available, that her order was taken, and that when it arrived, she knew what was in front of her and where. This was all made easy by my stoker, who was fun to be with and had a wicked sense of humour.

The stokers had a range of experiences. Some were blind from birth, others lost sight later in life, and some had limited sight in different circumstances. I also discovered that they were parents, working professionals, artists, funny, serious - all sorts of things on top of being visually impaired. 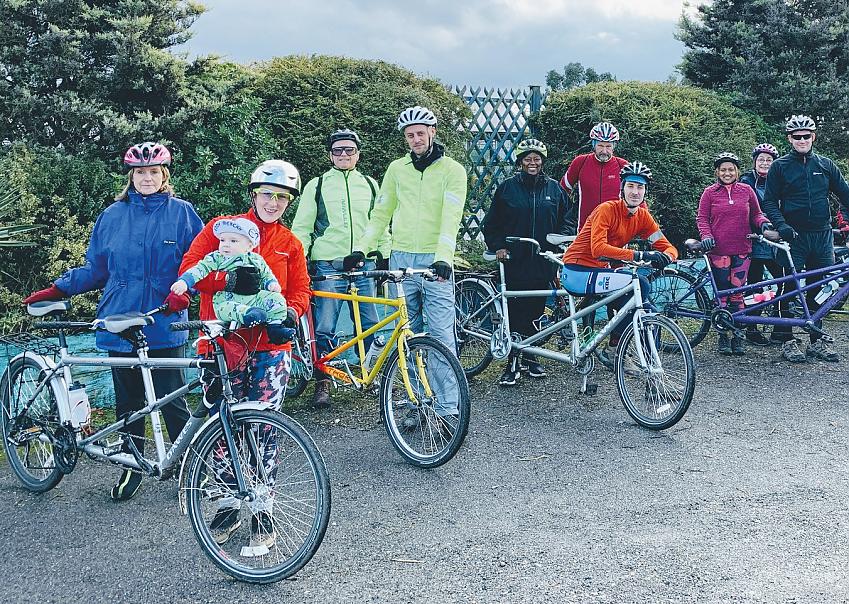 The group rides throughout the winter too

I have now done dozens of rides and have become a lot more confident piloting tandems. I particularly love the longer rides, such as a ride with an overnight stay in Sussex last summer. These rides allow us to escape to rolling countryside and quiet lanes. It also means we have the opportunity to enjoy a bit of racing, and the joshing that goes along with that.

In addition, I am involved in repairing and maintaining our tandems, some of which are quite elderly. We had no budget for this, but with the support of the bike shop where I work we have kept them on the road.

The club is about cycling, but it is also more than that for many of the visually impaired members. For example, one of the stokers has told me how she felt the club has given her confidence in her own abilities, not only on a bike but in her life in general. She has started to accept her sight loss and strive to live life to the full nevertheless.

It’s not all one way either. I have gained so much from becoming a member of MSSC: I’ve made some new and interesting friends, both sighted and visually impaired, and I’ve gained an insight into living with a disability. Plus I’ve learned a lot about tandems.

Riding a tandem is a sociable and rewarding experience, not just for the visually impaired stokers, who enjoy the freedom, camaraderie, and physical exercise, but for pilots like me who also appreciate the exercise and the company.

Bike Test: Separable tandems View
Join our 70,000 strong membership and together we can make a better world by bike Join
Cycling UK continues to support the UK to cycle
This remains true during this difficult period with the ongoing threat of coronavirus Covid-19
Read our latest advice on cycling