New figures show a cycling surge across Scotland over the past six months, which the Scottish transport secretary says must now be 'locked in'. But how should this be done and how can cyclists help? Cycling UK's campaigns and policy manager for Scotland, Jim Densham, explains all.

Figures out this week show that cycling in Scotland has dramatically increased over the past six months through the ongoing coronavirus pandemic.

Cycling Scotland’s automatic cycle counters have recorded a 43% increase in cycling between March and August, when compared to the same period in 2019. In the same week as stricter restrictions are being introduced throughout Scotland, it’s good to have some positive news.

Sixty automated cycle counters are dotted around Scotland and most are anonymous on the roadside so you don’t even notice them as you pedal past. But their clever technology works away recognising cyclists and counting them.

Located along some of the more popular cycle routes next to cycle paths and cycle lanes, they arguably provide the best picture of cycling levels in Scotland.

In a statement that accompanied the figures, transport secretary Michael Matheson said, ‘the task now is to lock-in the positive changes in travel behaviour we’ve seen recently’. At Cycling UK we couldn’t agree more.

The question is: how? What needs to be done to make it permanent and grow? 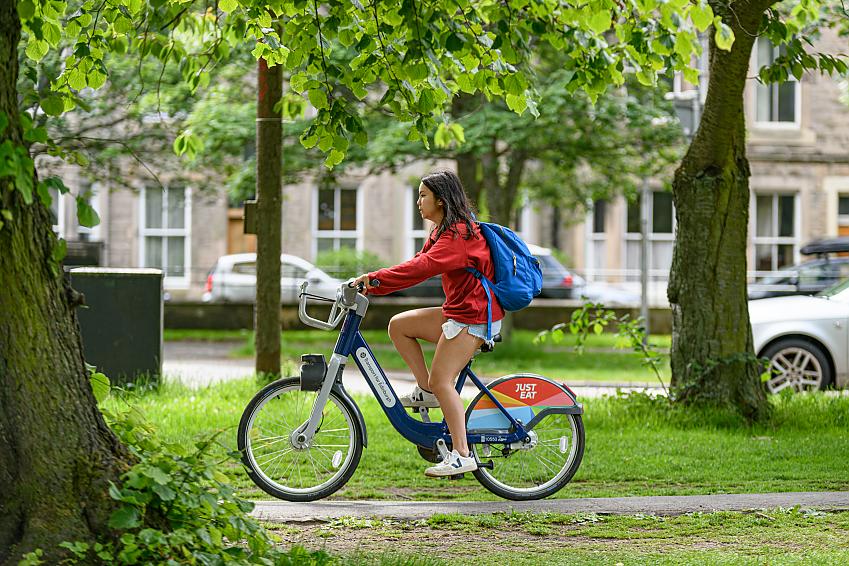 People across Scotland have taken to two wheels during the pandemic

We believe that the best way to lock in the changes and see a biking bonanza is to build, build, build. We urgently need new, safe cycling infrastructure in our towns and cities, and to connect communities in rural areas.

It’s positive that the Scottish Government has committed to spending £500m on active travel over the next five years, but that can’t be used in the next few months to lock in the positive behaviour change.

Instead, government and councils must work together to make the Spaces for People funding work hard and get value for money. This is the £39m for temporary infrastructure in Scotland to help people walk and cycle safely during the pandemic when we all need to maintain social distancing.

Thirty local authorities in Scotland received funding to put in temporary cycling and walking infrastructure, such as pop-up cycle lanes, widened pavements and 20mph speed limits. However there are big differences in the progress made around the nation.

Some councils were off the mark speedily – getting measures in place quickly and communicating well with local residents.

Other councils have consulted residents but have no plans publicly available, and nothing on the ground to help people socially distance.

It’s so important that councils prioritise the planning and creation of the Spaces for People infrastructure. There’s a risk that they will miss the boat and the increases in cycling in their areas – and the many benefits this brings to people – will fizzle away.

In the coming days and weeks I will be writing to all the councils to thank them for applying for the funding and urging them to prioritise this work. We will also be raising awareness of new infrastructure as it is planned and created, and helping members and supporters to write positive feedback, where appropriate.

It’s important to be positive about the temporary infrastructure that has been installed and the new measures to come this autumn. It won’t all be perfect, but we need to remember that it’s temporary and can be improved.

Councillors need to hear positive opinions and helpful suggestions for improvements, not just complaints from a vocal minority against the schemes.

If you’ve seen or used new cycling infrastructure, why not email your council and let them know you support it?

The Scottish Government is keen for temporary measures to be successful and become permanent where appropriate. There’s a short window of opportunity for councils to act so that people can maintain the cycling habit.

As cyclists we have part to play in supporting councillors, being positive about schemes and providing constructive feedback. This will all make longer-term investment for active travel infrastructure more likely.