Is £500m for cycling and walking in Scotland enough?

Is £500m for cycling and walking in Scotland enough?

The Scottish Government's recent Programme for Government included a £500m funding commitment for cycling and walking. But what is it for, and is it enough? Cycling UK's campaigns and policy manager for Scotland, Jim Densham, shares this thoughts.

Is £500m a lot of money? Sure it is – half a billion pounds is in the realms of El Gordo, the massive Spanish lottery draw. But is it enough money to make Scotland a cycling nation?

Last week Nicola Sturgeon stood up in the Scottish Parliament and delivered her Programme for Government for the coming year - her ‘to do’ list. As a good policy wonk I was glued to the live feed but also started skimming through the published document on the government website.

It’s a long read, so the thing to do is use the ‘Find’ function to quickly search for your key words. I entered ‘active travel’ and my eyes nearly fell out of my head:

"Lock in the positive changes in active travel by committing £500 million for transformational infrastructure".

Had I really won the campaigner’s equivalent of El Gordo - £500m for cycling and walking this year? That would be amazing, stupendous – it was only £100m in February’s budget.

I clicked the next result for active travel in the document:

"£500m investment over the next five years in active travel infrastructure, access to bikes and behaviour change schemes to promote walking, cycling and wheeling".

£500m split over five years, so no big increase after all, in fact no increase whatsoever – the same money for the next five years. I came down from the ceiling. 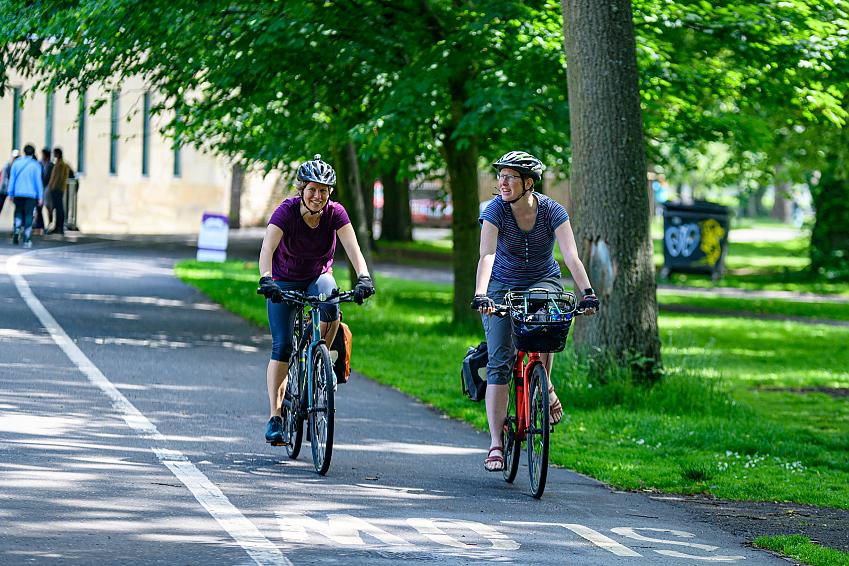 More people have been cycling in Scotland since lockdown

The announcement is a positive long-term commitment to consistently spend money on active travel – something we have been asking for, over many years. It will give long-term budgetary certainty to councils and to organisations which run walking and cycling projects.

This includes many of Cycling UK’s projects in Scotland which receive funding from Transport Scotland. We want participants in our projects to keep benefiting from the chance to cycle and we want our staff to feel more secure in their roles.

The problem with the big figure is that it hides a real-terms decline in the active travel budget over the next five years.

The Programme for Government explains that a ‘positive experience of lockdown has been the increase in active travel’ and the need to ‘lock in’ the benefits. A post-Covid budget equal to the pre-Covid budget does not show the urgency to provide the infrastructure that will keep people cycling.

It doesn’t reflect the world we are now living in. With concerns about the state of the economy after Covid, government is likely to be worried about big spending commitments. However, with strong calls for a green recovery and STUC research showing the potential for creating 18,000 jobs in cycling and walking infrastructure, the time is right to invest.

This is good as councils won’t have to use as much of their own limited funds to pay for their part of projects. However, it does mean that central government needs to boost the amount they allocate to keep the overall budget the same or increasing year on year.

Nearly all councils in Scotland are installing temporary infrastructure to help people practice social distancing through the Spaces for People fund. The appetite to do more is there but it needs greater investment. £100m is still only 3.3% of the transport budget and equivalent to what’s being spent to turn just three miles of the A9 into a dual carriageway.

With the Holyrood election due in May next year the Programme for Government feels like a pre-election pitch to the voters. Everything can change in the run up to an election as political parties try to gauge what promises will get them the most votes.

Cycling has been popular through lockdown so we are confident that we can boldly argue for more support and funding for cycling. With our campaigning partners we will be asking each party to promise much more than £100m per year and see investment as a way to improve the health and happiness of the people of Scotland as well as creating a cleaner environment.

We will need your help to get these messages to parties during the election campaign, as weight of public opinion counts. It is a vital opportunity to get increased commitment for a bigger budget, more cycling infrastructure and safer streets. Elections and politics can be a turn off but if you want Scotland to become a cycling nation, get involved.