The Whitehall Government has been taking soundings on an outline of a rural transport strategy for England - see Cycling UK's response. This is the third in a series of consultations on the 'Future of Transport' (previous consultations have covered urban transport and the regulation of transport technologies, such as e-scooters). Yet there are a lot of issues they seem to have left out.

Won't somebody please think of the children (and the tourists)?

The Department for Transport (DfT) starts its call for evidence by presenting an analysis of the current context, and requesting feedback. This analysis rightly identifies four key issues facing rural areas: dependence on the private car, access to key services,access to employment and social isolation.

I'd add two more though. The first is "access to education". Most school age pupils are not allowed to drive and, of those that are, few can afford to run a car. Young people in rural areas have much further to travel to school than their urban counterparts, particularly at secondary school age. Yet the DfT overlooks their needs completely. 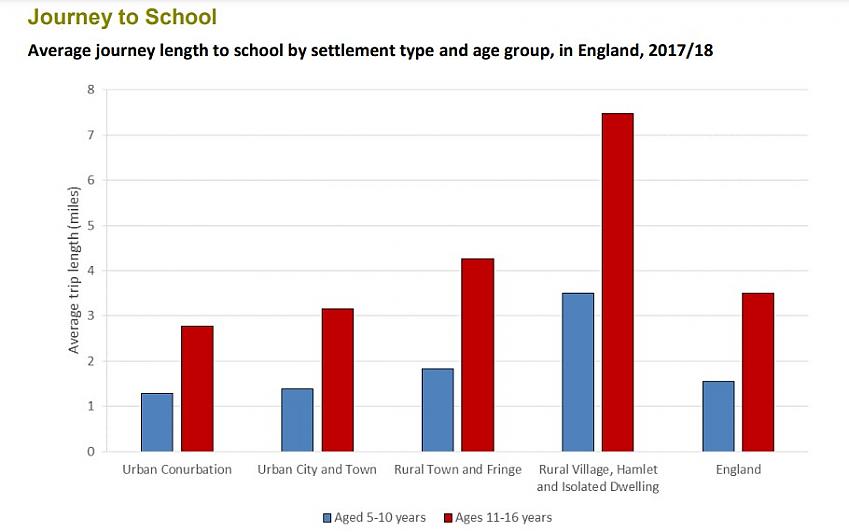 The DfT also seems to have forgotten that, in our most popular rural areas (notably our National Parks), recreational and tourist traffic generates huge pressures on local transport systems. This omission seems all the more remarkable, given recent memories of huge queues of parked cars in Snowdonia.

Things momentarily get a bit better in the document's brief section on "dependence on the private car". It observes (rightly) that: "In many smaller towns, residents have few options for convenient and affordable public transport and risk being cut off from basic services if they don't have access to a car". It then adds: "There also tends to be a lack of active travel infrastructure, including safe walking and cycling routes between towns and villages, increasing the reliance on the private car." Hallelujah, enlightenment!

Yet instead of considering how to address these problems, it goes straight into a section entitled "Developments in innovation for rural transport". This notes (again rightly) that "E-bikes can be particularly effective in semi-rural areas for last-mile trips connecting to mass transit." It misquotes an analysis of potential increases in cycling which found that, if e-bikes were widely available, cycle use in Cornwall could increase from less than 2% to 19.1% of commuting trips. However that statistic was about what benefits e-bikes could provide if combined with Dutch-quality cycling conditions (including lightly-trafficked rural lanes with lower speed limits, as well as protected cycle lanes).

It also showed that Dutch-quality cycle networks alone could  increase cycle use from less than 10.1% of commute trips - with the potential to almost double this again (to 19.1%) if e-bikes are then added to the mix. However these figures suggest that providing e-bikes alone would onlly push cycle use up to around 3.4% of trips.

Innovative technologies are no substitute for getting the basics right.

For several decades, councils have routinely given planning permission to housing and other developments in locations with poor public transport, making it inevitable that their residents will become very car-dependent.

With growing awareness of the climate crisis engulfing us, the Government's reforms to the planning system ought to be a timely opportunity to reverse this trend. Yet so far the signs are that, despite being in a hole, the Government is still digging.

Another missed trick is how to open up off-road routes in rural areas, using the rights of way network, and connecting it up better with urban cycle route networks in 'urban fringe' areas.

Local and national Government seem to think of urban cycling and walking networks in a completely separate silo from rural networks. At a national Government level, it's the Department for the Environment, Food and Rural Affairs (DEFRA) who are responsible for the rights of way network. They see it purely as an opportunity for recreational walking, cycling and horse-riding.

The pandemic has of course reminded us how hugely important it is to be able to get out for walks or bike rides. Cycling UK documented this in our 2017 Rides of Way report, and the Environment Agency has more recently reported that "the NHS could save an estimated £2.1 billion every year in treatment costs if everyone in England had access to good quality green space."

The Environment Bill, currently before Parliament, could provide the funding needed to extend and improve the rights of way network, enabling (for instance) school pupils in rural communities to walk or cycle safety to schools in nearby towns, as well as allowing families in those towns to get out for weekend walks or bike rides without having to jump in the car.

The Government also needs to recognise the potential for much better integration of cycling with rural public transport services. Cycling increases four-fold the distance from which people can reach train stations or even bus stops. Not only does this reduce car-dependence for rural dwellers, it also boosts the economic viability of the public transport that their communities depend on. It can also bring recreational cyclists into the countryside, giving a further boost to local economies.

There are a few rural bus services which carry bicycles, such as the 800 bus in the Lake District and the X45 and X46 services connecting York with Bridlington and Hull respectively. However they are the exception rather than the rule. Contrast this with the Switzerland's Postbus service, or the USA, where 70% of all buses have a bike rack mounted on the front. Imagine how much easier it would be for rural dwellers to avoid driving, or for visitors to get out into the countryside.

Another under-acknowledged solution is the idea of cycle hire. Many are familiar with London's 'Boris Bikes' (or Santander Cycle Hire, to give it its correct name), and similar schemes in Glasgow, Cardiff and other cities.

The rural version is less well known, yet the shared transport charity CoMoUK have run hugely successful pilot projects in England and Scotland to demonstrate the potential of offering e-bikes on a hire (or 'try before you buy') basis. The lessons from this project need to be replicated much more widely.

I said earlier that the Government's strategy had totally failed to consider visitor and tourist traffic. Ideally of course, we would all be able to visit the countryside easily without needing a car at all. Although that won't be realistic for many families with luggage, they could perhaps be persuaded at least to avoid using their car once they've got there, if there they are offered several walks or cycle rides from the place where they are staying.

This 'hub' concept is at the heart of the EU-funded 'Experience' project which Cycling UK is delivering with 14 partners, in Cornwall, Kent, Norfolk and three regions of France. We believe the concept could be applied more widely, particularly in our National Parks and Areas of Outstanding Natural Beauty.

Yes to e-bikes - but we need so much else too!

Of course we are pleased at the Government's enthusiasm for supporting e-bikes. We have long been frustrated that the Government's recently renamed Office for Zero Emissions Vehicles (OZEV) provided subsidies for electric cars, taxis, motorbikes, vans, lorries... every type of vehicle except e-bikes!

This was despite evidence showing that, pound for pound, subsidising e-bikes saves twice as much CO2 as subsidising electric cars. The Government's excellent (but seriously underfunded) 'Gear Change' vision for cycling and walking promised to "establish a national electrically-assisted bike support programme". We are still waiting, though I remain hopeful it will be coming soon.

But people also need safe spaces to ride them, in urban and rural areas alike.

We need good integration of cycling and public transport, including bike share schemes.

Most of this is not innovative, it's simply common sense that has been overlooked for too long. With transport decarbonisation now high on Ministers' agendas ahead of the COP26 international climate summit that the Government is hosting later this year, I hope the time has at last come to put this common sense into practice.

End the school run menace and get kids back on their bikes, Cycling UK urges as Bike to School Week launches View

Tell your MP new housing must be cycle-friendly, not car-dependent View