Decarbonising transport: being "led by the science"

Decarbonising transport: being "led by the science"

Transport Secretary Grant Shapps says he wants us to "use our cars less". Yet his department's spending plans are still speeding off in the wrong direction. In this blog Cycling UK Policy Director Roger Geffen urges the Transport Secretary to set evidence-based targets for a low-carbon future, with funding allocations to match.

Back in March, the Department for Transport (DfT) published a document called Decarbonising Transport: setting the challenge. In his foreword to the document, Transport Secretary Grant Shapps set out a 6-point vision for a zero carbon future, in which "Public transport and active travel will be the natural first choice for our daily activities. We will use our cars less".

Public transport and active travel will be the natural first choice for our daily activities. We will use our cars less

I and other sustainable transport campaigners described this statement as "absolutely amazing" and "gobsmacking". This was the first time a UK transport minister since John Prescott promised to reduce road traffic in the late 1990s (sadly, Prescott failed).

This document paved the way for a Government consultation (which has just closed) on a proposed Transport Decarbonisation Plan (TDP) - see Cycling UK's full response, or a summary version. It is due out by the end of this year, and will inform transport spending decisions in the Chancellor Rishi Sunak's Comprehensive Spending Review, which will be drawn up at the same time. Shapps's and Sunak's decisions will crucially affect whether this Government achieves what Prescott could not manage.

It is certainly a big challenge. Although the UK economy has successfully reduced its overall domestic emissions of greenhouse gases (mainly thanks to steep cuts in the energy sector), transport emissions remain at about the same level as 30 years ago. There was a slight dip following the 2008 recession, but this has reversed since 2013, not least due to sharp growth in Sports Utility Vehicle (SUV) purchases, negating motor manufacturers' claims about improvements to energy efficiency. But as a percentage of the (declining) UK total, it has gone up from 18% in 1990 to 31% in 2018. 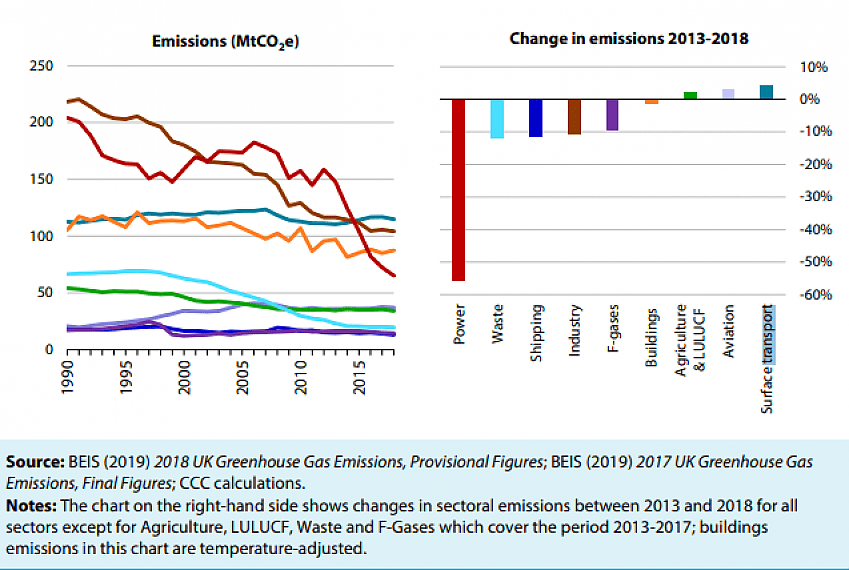 How much less traffic?

So, if we need to "use our cars less", the next question is, "How much less?" Consultancy Transport for Quality of Life (TQL) tackled this question in a briefing for Friends of the Earth.

The answer, of course, depends on on how quickly we replace our petrol and diesel engines with fully electric vehicles, and decarbonise their electricity supply.

TQL estimated that, even on the most optimistic assumptions about the speed of adopting battery-electric vehicles and a zero-carbon power supply, we'd still need a 20% reduction in motor traffic by 2030 if transport is to make its fair share of the emissions cuts needed to get to a 'net zero' economy by 2045 (NB the Government subsequently-adopted 2050 as its 'net zero' target date). On more pessimistic assumptions about progress in decarbonising our vehicles and their power supply, this figure rises to 60%.

The Government has since consulted on plans to bring forward the end-date for sales of petrol, diesel and hybrid vehicles, from 2040 to 2035. However this doesn't alter the basic principle. It's not enough to replace our current vehicles with electric ones. Significant cuts to road traffic are also needed.

Moreover, this isn't just about encouraging a switch to cycling and other sustainable alternatives. After all, the longest 3% of journeys by road account for 30% of road transport emissions.

The experience of Covid-19 has pointed to possible solutions. The Committee on Climate Change and the AA have both called for broadband investment, rather than roads spending, as a way to cut out some journeys altogether.

Meanwhile the Government's current consultafion on new planning policies must enable people to make shorter journeys, by ensuring that new developments are only allowed to go ahead in places where they will have good links to local employment, education, shopping and other opportunities. Transport for New Homes has shown that the locations for recent housing developments have generally been chosen to maximise ease of access to the road network, rather than to town centres of public transport links. The Government's planning policies must seek to change this.

In short, the Transport Decarbonisation Plan (TDP) must state clearly what level of road traffic reduction it is aiming to deliver. It must set a target date for halting the growth of road traffic, and then for reversing it.

Only then can the Government work out sensible targets for increases in cycling and other sustainable alternatives. This can be done by identifying the X% of journeys that could most easily be switched to a lower-carbon option, where "X%" is the level of traffic reduction needed to meet our wider decarbonisation targets. Lower carbon options include not travelling, or making a shorter journey, as well as changing the mode of transport used. Planning policies must support the aim of reducing demand for travel, especially by private car.

The Government should then allocate its transport spending in line with these targets for traffic reduction and sustainable alternatives.

I am pretty sure this would highlight both the need, and the opportunity, to drastically cut that £27.4bn of roads spending! After all, there is drastic pressure on public finances. So why is so much of the transport budget going on roads, given all the harm they cause? The Department for Transport has still not published the research it commissioned to assess how much funding is needed to meet its own targets to double cycling trips and increase walking by 2025 (despite promising to do so). Nor has it published any kind of assessment of the carbon or other overall impacts of its roads programme. A crowd-funded legal challenge is now underway to force the Government to reconsider.

Similarly, how come cycling and walking receive so little funding, given how much good they do? It's great that the £2bn earmarked so far for cycling and walking investment over the next 5 years represents a 6-fold increase compared with the £314m earmarked for the previous 5 years. But we're pretty sure it's only between a quarter to a third of what's needed to meet the Government's targets - and even that only gets us a fraction of the way to net zero.

Cutting the road-building budget - or, if need be, persuading the court to rule it illegal - could not only reduce our risk of missing our net zero budget, but could also help fund the means to meet that target. Even without the post-Covid financial situation and a court case, it would surely be the right thing to do. With them, it ought to be a no-brainer.

What else have we called for?

To summarise so far:

Section 1 of our response to the Transport Decarbonisation Plan response calls for the setting of evidence-based targets to halt and reverse the growth of road traffic and to increase the use of sustainable alternatives (including using broadband etc to avoid travelling). These targets must be accompanied by policies (including planning policies) which could demonstrably meet those targets.

Section 2 calls for funding to be allocated in line with those targets. This would necessarily see a large switch from national road-building to sustainable transport options, and to better maintenance of the roads we've got (especially the local roads, where walking and cycling are most prevalent).

Section 3 covers the need for high quality infrastructure for cycling. We have strongly welcomed the Government's new cycling infrastructure design guidance (something we have long called for), with its emphasis on coherent cycling networks (rather than disconnected individual cycling schemes), and its insistence on protected cycle lanes for faster or busier main roads. We are also pleased at its insistence that local authorities must follow this new guidance if they want to receive funding, and its plans to set up a new body called Active Travel England to ensure that this happens. Active Travel England will be there partly to support local authorities in building up the skills needed to plan and implement good cycling and walking networks, partly to assess their performance (rather like an 'Ofsted for cycling and walking'), partly to withhold funding from councils who are misspending it, and partly to be a consultee on new developments. Cycling UK believes it needs to be set up quickly, and properly resourced, in order to fulfil these roles.

We've also called for cycling and walking provision to be consistently included in planned highway maintenance works (whenever a road is being resurfaced, this should an opportunity to consider how it could be made more cycle-friendly at the same time). We have also pressed for better connections between urban cycling and walking networks and the rights of way network in the surrounding area - with good surfacing and lighting where the rights of way network has greatest potential to support day-to-day travel as well as recreational cycling and walking. This could create opportunities (for instance) for children in nearby villages to walk or cycle to school safely, at all times of the year.

Section 4 covers other safety measures, including: the adoption of 20mph as the 'default' speed limit for built-up streets; a comprehensive review of road traffic offences and penalties; strengthening roads policing; and action to promote lorry safety; as well as our support for the changes now being proposed to the Highway Code.

Section 5 covers cycling's role in relation to other transport modes. We have called for various measures to promote the combinations of cycling with trains, buses and other forms of public transport; action to support bike share schemes (such as the Santander Cycles scheme in London); and a cautious 'safety-first' approach to legislating on autonomous vehicles and 'micromobility' vehicles (such as e-scooters).

Section 6 concludes with a call for the revenue funding needed to support cycle training and other initiatives to boost cycle use, particularly among groups who would otherwise remain under-represented in cycling. This includes not only women, children and older people, but also people from BAME communities. health patients and people with disabilities. Many people in these groups could particularly benefit from taking up cycling, but are unlikely to do so without having first had a 'try before you buy' experience of it. This is particularly true for people who are likely to need an electric-bike or a non-standard pedal cycle, due to their age, health conditions or disabilities.

But the key point is that the funding for all these measures needs to demonstrably be sufficient to meet the Government's targets. And those targets need to be evidence-based and 'led by the science'.

Given the critical role of the Transport Decarbonisation Plan in shaping the Chancellor's next Comprehensive Spending Review, it is crucial that it is informed by solid evidence about the role that cycling and other sustainable transport options could play in delivering a net-zero economy - and how much more achievable that goal becomes once the road-building budget gets reallocated!