Timmy Mallett: seize the day and get riding for Bike Week

Timmy Mallett: seize the day and get riding for Bike Week

Children's TV icon and cycling artist Timmy Mallett rode 3,500km from Berkshire to Spain, inspired by his brother. This Bike Week he asks everyone to share the joy of cycling

For anyone who grew up with children’s TV in the 1980s, the name Timmy Mallett will immediately bring a smile of recognition. But there’s much more to the star of Wacaday (and number one pop artist with his 1990 cover version of Itsy Bitsy Teeny Weeny Yellow Polka Dot Bikini) than silly catchphrases, outrageous outfits and that giant foam mallet.

Timmy is also known as the Cycling Artist: a lifelong fan of getting on his bike as well as an accomplished modern impressionist painter. (Though even here he can't resist a joke: the address of his fine art website is, inevitably, mallettspallette.co.uk.) Always keen to explore new places on two wheels, Timmy has cycled the Coast to Coast route, Hadrian’s Wall, and Chester to Chepstow. He has ridden across Northern Ireland and along the east coast of Scotland – and three years ago he took on his biggest challenge ever.

In March 2018, just days after the funeral of his older brother, Martin, Timmy set off from his home in Berkshire to ride across France, over the Pyrenees and through northern Spain on the Camino de Santiago, the ancient pilgrimage route to Santiago de Compostela and the cathedral where the apostle St James is buried. He rode on an e-bike (sadly stolen from the car park of his local pub not long after he returned) laden with painting supplies, his panniers adorned with the scallop shells that are the symbol of the Camino and also feature on the Mallett family crest.

Cycling is brilliant inspiration for me and my paintings and it’s great for bringing a smile to my face!

Born with Down’s syndrome, Martin was not expected to survive much beyond his teenage years; he ended up living what his famous brother called “64 filled years”, and Timmy was determined to live up to his brother’s example. He even influenced Timmy's choice of cycling wear: “Martin always wore a tie and was the best-dressed Mallett in all our family.” And so, along with hi-vis jersey, buff, clashing socks and cycling shorts, Timmy wore a tie on his journey, pinning badges to it from the places he visited.

As another reminder of his brother, Timmy took along a bundle of embroidered Martin Mallett name tags rescued from his belongings, the kind your mum might sew in a school jumper. As he journeyed, he hid 60 of these tags along the way – tucked into walls, under statues, hidden in trees – and recorded the locations on his Camino blog and in his book, Utterly Brilliant! My Life’s Journey, which has just been published in paperback (see sidebar).

With Bike Week (30 May-5 June) fast approaching, Timmy is keen to share his love of cycling with as many people as possible. ‘I’m delighted to be supporting Cycling UK and Bike Week 2021,” he says. “Cycling is brilliant inspiration for me and my paintings and it’s great for bringing a smile to my face!"

“Seize the day” is his advice. “A bike ride is a way of being involved in the here and now of living. I love it. My brother Martin, with Down’s syndrome and language and learning difficulties, made the most of every single day of his life. He and I would cycle like crazy, we’d cycle a lot together. He was always saying, ‘You and me, let’s do it!’, whatever it was. I took him in my heart on my journey and he inspired me to reach my potential every day.

“When you’re cycling you have time to consider, and see yourself in the environment and in the big wide world and how you fit into it. Last week I cycled around the Cotswolds, and from Winchester through Jane Austen country. It’s not how far you go or how fast, it’s about how much fun you have along the way!" 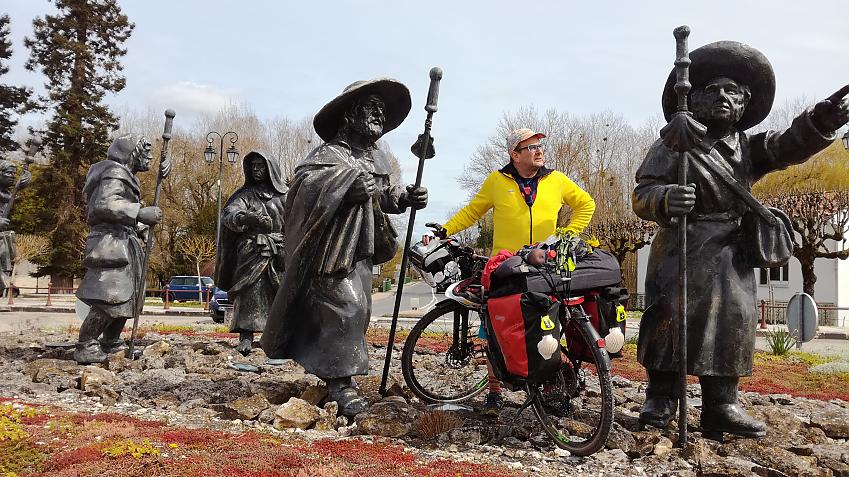 Pilgrim on an e-bike

Where will Timmy's bike take him next? The list seems endless. "In the run up to Bike Week 2021 I’ll be pedalling the Varsity Route from Cambridge to Oxford, stopping at every opportunity, detouring wherever looks interesting and greeting all those I meet. There are fabulous things to see in Britain and the more I cycle the more inspired I am.

Who are we to argue with that? Wherever you ride this Bike Week, make sure you share on social media using #BikeWeekUK and #7daysofcycling, and pledge to ride as part of the World's Biggest Bike Ride on Sunday 30 May. 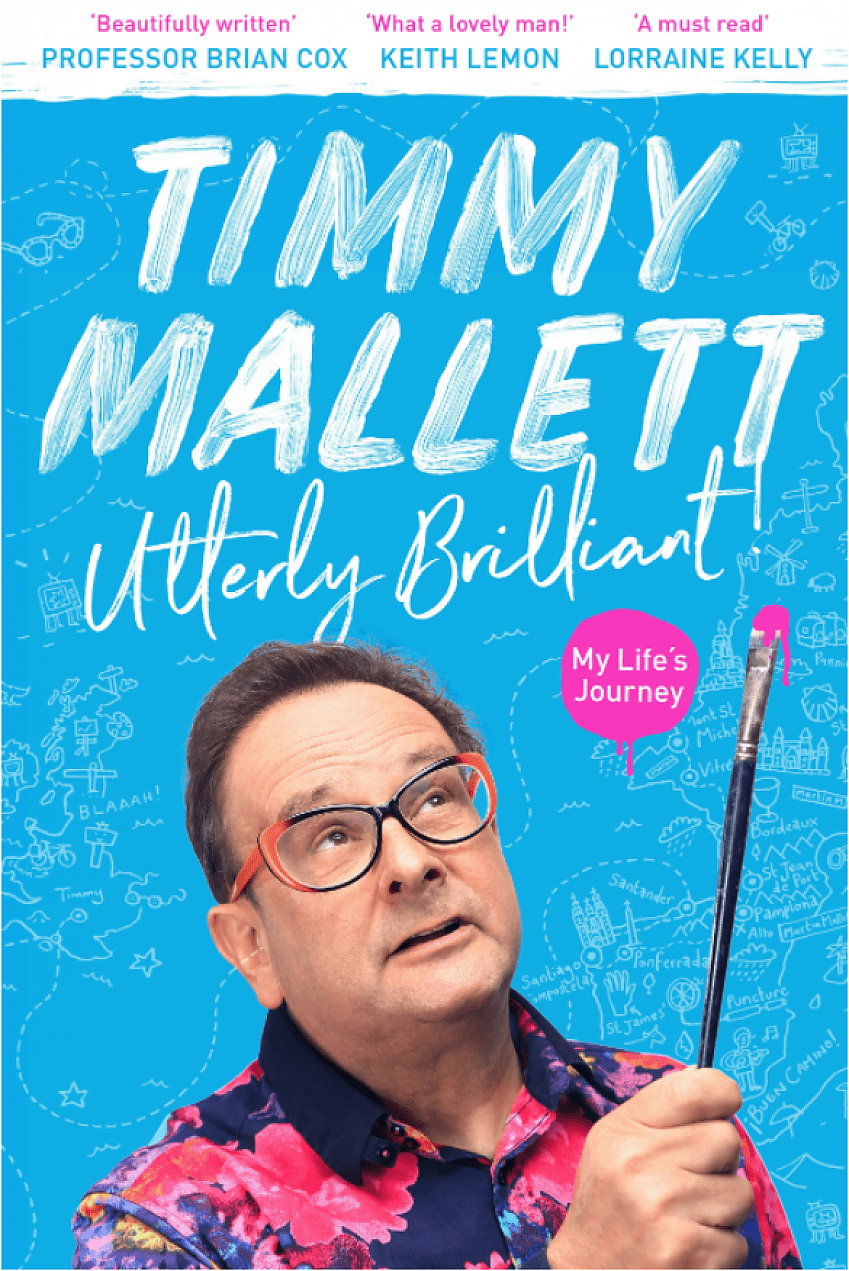 There are two journeys in this heart-warming book. The first is Timmy Mallett’s 3,500km journey on an e-bike from his home in Berkshire to Santiago de Compostela in northern Spain and back, inspired by his brother Martin who died shortly before Timmy set off. The second is Timmy’s own remarkable life, which saw him become a children’s TV icon and an unlikely chart-topping pop star, travelling the world and meeting famous faces from Beatles to prime ministers, as well as an accomplished artist.

These two strands intertwine as Timmy rides off into the teeth of the Beast from the East in what should have been spring 2018, loaded up with art supplies to paint what he saw along the way, and leaving a trail of his brother’s woven name tags hidden at significant spots. The long history of the Camino de Santiago is also threaded through the narrative, including how St James’s mummified hand came to reside just a few miles from Timmy’s home in the Thames Valley while the rest of him lay at the other end of the journey. A selection of the 100 or so paintings Timmy created along the way are featured in the book too.

Living with Down’s syndrome and learning difficulties, Martin Mallett shared his famous brother’s love of bikes and always found joy in the moment, and a recurring theme in the book is the way cycling allows us to live in the here and now. Instead of worrying about the future, when you are on two wheels what matters is “the next cuppa, the next junction, the next corner”. As Timmy explains, if he sees an enticing view he can stop, if there’s a tempting detour he can take it, thus making the most of chance encounters, as when he pauses to photograph a garden in a French village and is invited to stay the night by the owner.

Of course, a trip this long never goes entirely smoothly: on the first day, his chain snaps barely before he has got to the end of his road, and there are plenty of wrong turns, drenching storms and e-bike battery warnings before journey’s end. But Timmy’s infectious optimism and determination to “reach his potential” in the same way Martin did see him through any setbacks, and left me with a new sense of respect for the man with wacky specs who brightened up Saturday-morning telly all those years ago.

On my bike: Timmy Mallett View

Get pedalling for the World's Biggest Bike Ride View