The Way of the Roses

Signage is good on the Way of the Roses, and there's an information pack available
By cotterell
Wednesday, 1 April 2015

The Way of the Roses

Robin Russell organised a memorable coast-to-coast trip from Morecambe to Bridlington for 10 pairs of sighted and blind tandemists.

Sometimes Beech Holme Tandem Club’s annual cycle tour is in the UK; other times it’s in a foreign country. This time, from the point of view the Yorkshire folk who make up our club, it was both: we’d be riding through Lancashire! The Way of the Roses cycle route runs for about 170 miles form Morecambe, in the red rose county of Lancashire, to Bridlington, in the white rose county of Yorkshire. We planned to do it as a sponsored ride in three days.

Our usual rides, with sighted tandem captains and blind or partially-sighted stokers, take place each Wednesday evening. They’re 20-30 miles with a pub stop along the way. So it would be a big step up to do 50-60 miles each day for three days.

The long weekend began with a 5:00am start from Hull in a minibus. The ten tandems we’d be riding, plus two new ones we picked up from JD Tandems en route, travelled in a support van. All went well and we arrived in Morecambe at 9:30. We visited the beach to get photos and dip our wheels in the sea. Since the tide was out, we made do with a rock pool instead.

The Way of the Roses route signs were easy to follow. We left Morecambe on an old railway track, occasionally glimpsing the River Lune through the trees. Morale was good; everyone was feeling the exhilaration you get at the start of a big ride.

Lancaster came and went. Then we were in a landscape of valleys and hills. After 10 miles, we stopped for coffee at the top of a steep climb. It was already a hot and sunny day. The first four tandems arrived within minutes of each other and left before the other six arrived. It was going to be a long day for the slower six tandems…

The views were fantastic. From Mewith Lane, we could see across a valley to Ingleborough and Pen-y-Ghent.

The views were fantastic. From Mewith Lane, we could see across a valley to Ingleborough and Pen-y-Ghent. There was then a long descent into Clapham, where the Dalesman magazine was based, and where I’d once seen Alan Bennett on the high street. We had lunch at Austwick. We would need the energy for the 1-in-4 climb out of Settle that wasn’t far away.

It’s a fearsome hill, and partly cobbled. Most walked, at least in part. ‘Big Tom’ and his stoker Dave cleared it without putting their feet down, despite chain and cassette problems. Dave was honking on the back like a professional. He had been a 10,000 metre runner in his day and is still very fit.

The run down into Malham was a welcome opportunity to rest tired legs, while anticipating a shower and a pint of beer. We arrived in two groups: one at 4pm, the other just after 7pm. 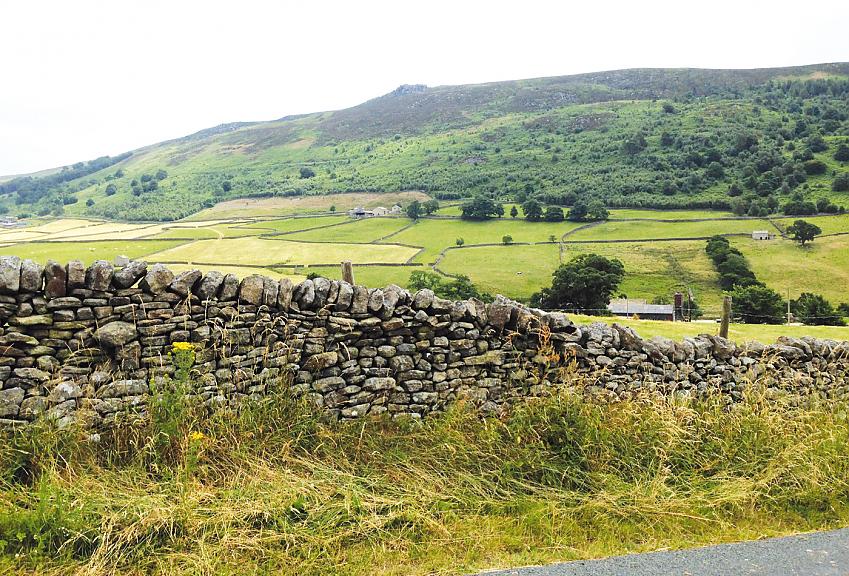 Day two was another early start, because there would be more hills to contend with. Big Tom and Dave were still having trouble with their tandem so they switched to one of the spares.

It was perfect weather again and there were very few cars on the roads. It was beautiful. The scenery changed all the time. Soon we were leaving the River Wharfe behind at Skyreholme and climbing steadily to join the busy B6265 to get to Stump Cross Caverns. At the lunch stop at Coldstones Cut, we realised that a big gap had again opened up between the leading four tandems and the other six.

The weather was looking overcast as we gingerly descended the minor road that runs parallel to the scarily steep Greenhow Hill. Back on the official route again at Glasshouses, we continued to Brimham Rocks and Fountains Abbey. We then enjoyed a wonderful descent through Studley Royal. At Boroughbridge market square, the support vehicle caught up our leading group of four tandems to tell us that the other six had only just left Greenhow Hill.

The remainder of the day’s ride to York was through quiet, picturesque villages nestling alongside the River Ouse. We were soon sitting at the picnic tables in the YHA garden with drinks. It was 5pm. Our evening meal came and went before the other 12 tired riders arrived. 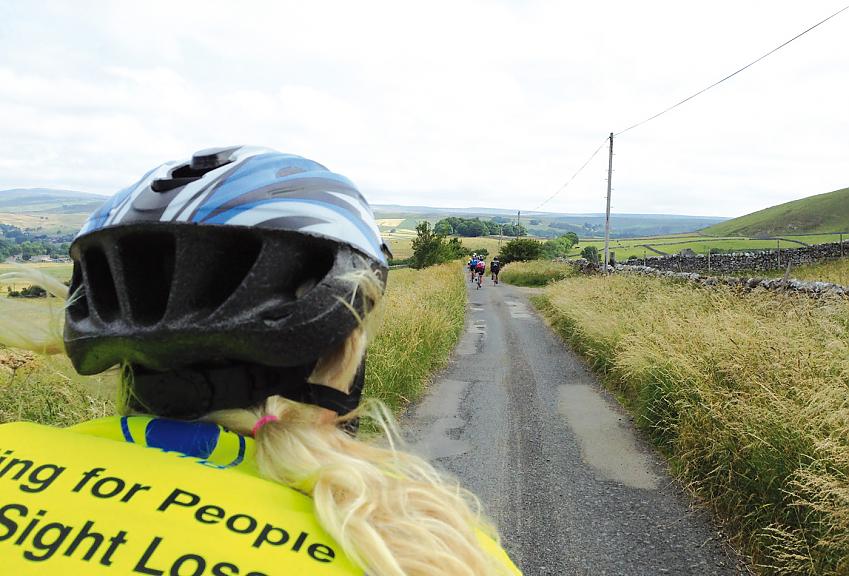 The Way of the Roses route uses cycle tracks and minor roads, so traffic is light

On the third day, we were into territory we knew well. With smaller hills, it became easy to stay together as a group, and a good series of cycle tracks meant that it was easier to chat as we cycled along.

We enjoyed a great descent at Huggate, and got our first sight of the coast, 26 miles away. It wasn’t long before we were charging down Woldgate into Bridlington. If local artist David Hockney had been out and about, he might have captured our triumphal arrival on canvas.

As it was, we rode into the old town and lined up on the promenade for a ceremonial ride towards the waiting cars and vans at the journey’s end. We ritually dipped our wheels in the North Sea, and each threw in a pebble that we’d carried from Morecambe. Then we retired to the Esplanade Hotel for a much deserved meal.

The faces of the riders said it all. What a super achievement for a mixed group of people with very different cycling abilities and fitness! It was the best ride we had done as a group. And on top of that we raised £3,790 – enough for another two new tandems.

Robin Russell is the leader of Beech Holme Tandem Club.

This was first published in the April/May 2015 edition of Cycling UK's Cycle magazine.

Beech Holme Tandem Club (BHTC) was formed in the 1950s when Alfred Bird, a blind man and member of the Hull and East Riding Institute for the Blind Social Club, approached Cliff Pratt, a well-known cycle dealer and secretary of the local CTC DA. (He was later a CTC Council Member, Honorary Vice President of CTC, and founder of the York Rally.) The plan was to organise cycling activities for blind and visually impaired local people. The club became a CTC section. Today, it’s a Cycling UK affiliate. Cliff Pratt’s nephew Dave is the current club president.

BHTC has around 45 members. The majority of our visually impaired members live in sheltered accommodation adjacent to the offices of the Hull and East Riding Institute for the Blind (HERIB), where we house our 15 tandems. Our sighted tandem captains (the front riders) all undertake a practical training/test session to ensure that they can ride a tandem safely. 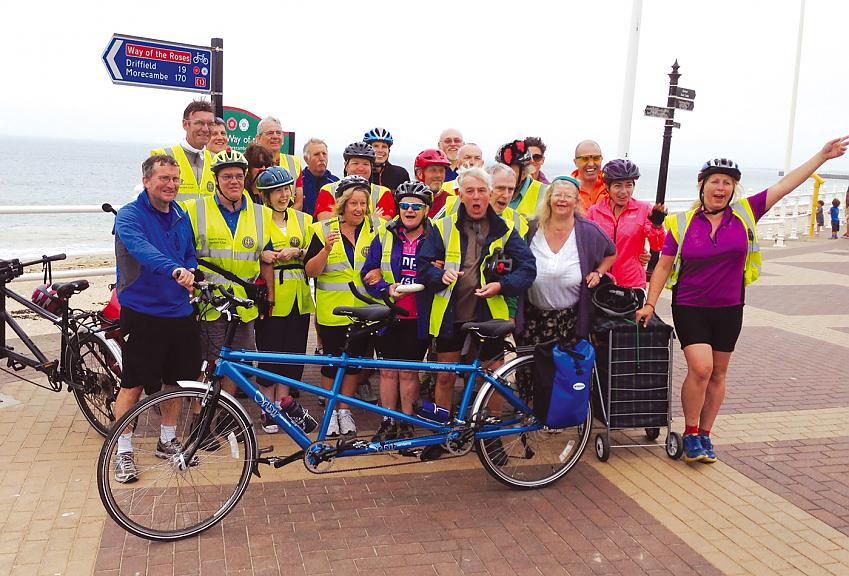 Way of the Roses tandem ride

Morecambe to Bridlington via the Lune Valley, Yorkshire Dales, Nidderdale, and the Yorkshire Wolds.

Youth Hostels at Malham and York

Orbit Routier tandems from JD Tandems. We’ve bought 11 of them over the past four years, to replace older machines, and also have four secondhand tandems that have been donated from members of the local community.

Next time we would

Possibly take four days instead of three to make it easier for less fit riders. 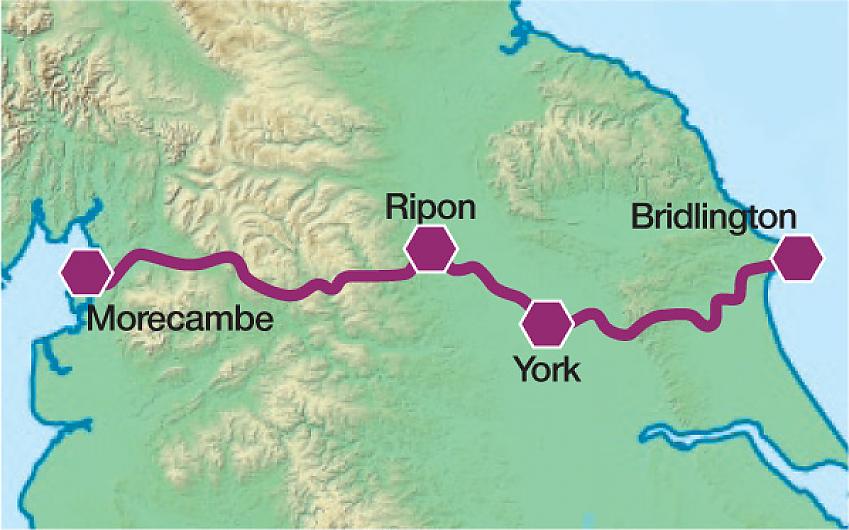