We often hear that cycling can save you money on transport but exactly how much can we really save? Cycling UK’s communications officer Christina Bengston investigates

The UK is experiencing a cost-of-living crisis. According to the Institute for Government this is being caused by “high inflation outstripping wage and benefit increases and has been further exacerbated by recent tax increases”.

As many of us think about how to save money, Cycling UK wanted to share with you how cycling can also play a part in reducing your bills.

Cyclescheme, a major provider of the Government’s Cycle to Work programme, did some research into the annual costs of running a car compared to those of owning a cycle. It found that running a car costs on average £3,727 per annum; a cycle, however, is just £396.

We recognise that it’s difficult or even impossible for most people to replace their cars with a cycle. But this isn’t about getting rid of your car and cycling every journey, but rather about making small, manageable changes that can make real differences.

Almost a third of people who have a driving licence also cycle, and more than 83% of adults who cycle also drive. According to Department for Transport statistics, 71% of all journeys made in England in 2020 were fewer than five miles, a distance that can be cycled by many.

Below, we will look at the savings you can make by switching from your car to your bike for short journeys, but first, let’s compare the big expenses.

Your initial outlay when buying a cycle on the other hand is much lower. Research by insurance company Aviva showed that the average cost of a cycle in 2020 was £835, while that of an e-cycle was £1,201. But this includes top-of-the-range models, and you can pick up new cycles for much less.

Fuel prices are at an all-time high, representing a significant outlay for car drivers. The RAC Fuel Watch has unleaded petrol at 190.65 pence per litre and diesel at 198.42 pence per litre at the time of writing. That means filling up the average 65-litre petrol-run car would set you back £123.92.

According to the most recent National Travel Survey, on average, people in England made 739 trips in 2020. The majority of these journeys (71% in England) were fewer than five miles. But cycling only accounts for around 3% of all journeys.

Imagine the money we could save if we switched those short drives to pick up a few items at the shops or dropping the kids off at school to a bike. 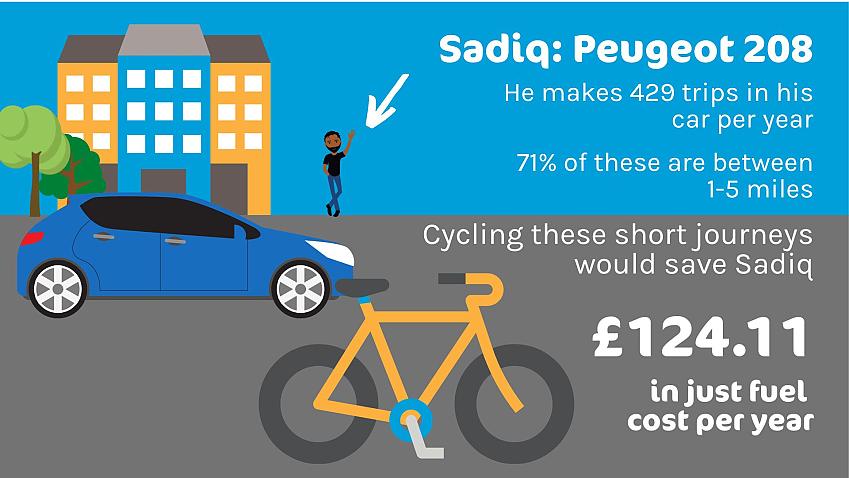 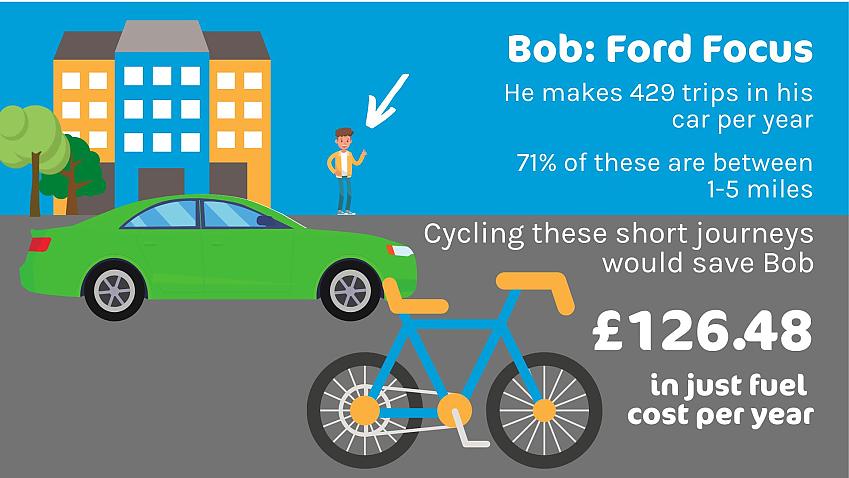 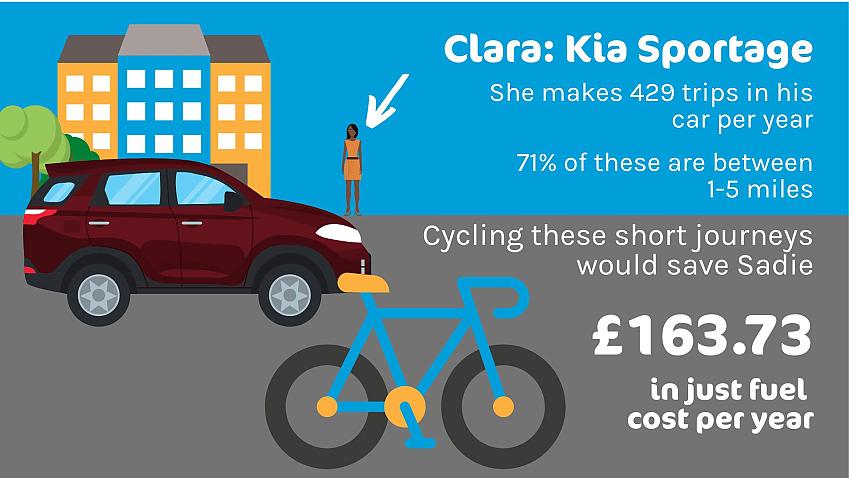 However, fuel is just one cost to consider when it comes to running a car. There’s also maintenance, insurance, Vehicle Excise Duty and more.

The average cost of a full car service depends on your car. For a small car it’s about £155, for a medium-sized car it’s £205 and for a large car £395. This doesn’t include the cost of any replacement parts, repair or labour cost (unless you’re capable of fixing your own car).

Cycle replacement parts are far cheaper than those needed for a car. A service costs between about £25 and £100, depending on your bike and the level of service you require.

One big difference is that many cyclists can do most repairs themselves; this isn’t true of cars anymore. Cycling UK has lots of helpful videos, advice and courses to help you improve your bike mechanic skills.

According to the Association of British Insurers the average cost of fully comprehensive car insurance in the UK was £416 a year, in the first quarter of 2022. This is higher for electric vehicles: £629 in 2022.

However, premiums vary due to things like age of the driver and where in the country they live. They’ll be much higher for a 20-year-old living in Greater Manchester, for example.

Unlike with cars, there is no legal obligation to insure your cycle. That doesn’t mean you shouldn’t, though. A Cycling UK membership comes with free £10m liability insurance cover. With individual membership starting at £33 a year, this is a huge saving. But even comprehensive cycle-specific insurance is much cheaper than that for a motor vehicle, at about £91.

Fortunately, Road Tax was abolished in 1937 thanks to the work of Winston Churchill, so no one pays this anymore. Roads and their maintenance are paid for via general taxation and council tax – which everyone pays, no matter their choice of transport.

As a guide, with an average family car, such as a Ford Focus, you’ll pay £190 in the first year and £165 in following years.

So how much does owning a car cost compared to owning a cycle? We worked out some average costs of car ownership versus cycle ownership, using the three marques mentioned above, plus an electric car, against an average cycle, an average e-cycle and a reasonably priced hybrid and e-cycle from Halfords. See the tables for the details.

* Cost of replacement battery if required

More realistically, though, you’re more likely to replace a second runabout car with an e-cycle. So let’s compare the Impel e-cycle with the Peugeot 208. The savings are less, but still significant.

Costs of driving vs benefits of cycling

In addition to the high cost of owning a car, there are also lots of hidden costs to driving and benefits to cycling you might not immediately think of.

Parking for cyclists is free. Whether you’re parking in a bike stall or designated space, or you’ve locked your bike to a pole, railing or tree, it won’t cost you anything.

The average cost of parking a car in the UK is between £1.10 and £1.65 per hour. It might not sound like much, but with frequent shopping trips, it adds up. It’s not just shopping trips, either, if you work in central London and drive your car to the office you can expect to fork out around £3,168 a month!

The benefits of cycling to our health and wellbeing are enormous and widely documented.

Cycling is excellent exercise. It helps people meet their recommended physical activity guidelines and improves their physical health while reducing the risk of premature death and ill health.

Cycling to work is linked with a 45% lower risk of developing cancer, and a 46% lower risk of cardiovascular disease (CVD), compared to commuting by car or public transport.

The importance of exercise on our mental health and wellbeing is often underestimated by individuals and even some health care professionals. Aerobic exercises – including cycling – have been proven to reduce anxiety and depression.

Climate change threatens the future of our way of life and economy, as well as our health and the natural environment we all treasure.

Cycling provides a highly efficient transport option and it is part of the solution for a low-carbon future.

If people in England became as likely to cycle as people in the Netherlands, there would be around two million fewer car-driving commuters. Consequently, English authorities could reduce CO2 outputs by more than 1,500 tonnes a year on average.

Put simply, switching our short journeys (five miles and under) from a car to a bike is one of the simplest lifestyle choices that individuals can make to reduce their carbon footprint.

If you’re thinking of making a switch from the car to the bike for some of your shorter journeys, make sure to read our advice pages. Whether you’re a beginner, need help planning a route, or tips on commuting, Cycling UK can support you.

First published in March 2022, this article was updated in July 2022 with the most recent research; with additional material by Cycling UK digital officer Rebecca Armstrong.

Have you been affected by the fuel crisis?

The price of petrol is rocketing at the pumps and does not look set to decrease any time soon. Cycling UK would like to hear your story.

Have you been affected by the fuel crisis? View

A guide to insuring your bike View