On Friday 3 September, two days before professional road cycling’s super stars like Mark Cavendish leave Penzance to begin the Tour of Britain, cyclists looking for a different way to experience Cornwall can do so on England’s newest route: the West Kernow Way.

Developed by charity Cycling UK, the West Kernow Way (‘West Kernow’ is Cornish for ‘west Cornwall’) is a largely off-road 150-mile (230km) loop route starting in Penzance. It winds its way west through the Cornish landscape to become a figure of eight, using quiet roads, bridleways, byways and lost ways.

It takes in rugged coastlines, old miners’ tracks and sites such as the World Heritage Site of the Tin Coast including the Botallack tin mines, the Bronze Age monument Mên-an-Tol, Land’s End, St Michael’s Mount and Lizard Point, and is estimated to take three to four days to complete.

“The West Kernow Way is an adventure cycling route that takes you to the famous familiar sites along unfamiliar but fantastic trails. Travelling through lost lanes and forgotten ways, you get to experience Cornwall’s rugged beauty, its history and culture – and of course, of great importance to any cyclists: the hearty Cornish cuisine!”

Cycling UK has worked for over a year developing and consulting on the route, including site surveying and recceing the route to bring about the right balance between adventure and challenge.

The route’s development has been made more difficult, as the cycling charity has had to delve into the archives and unearth old maps as it hunted for lost ways which take cyclists away from busy roads.

Some of the lost ways the West Kernow Way reclaims are along the Tinner’s Way on the Penwith Peninsula. This ancient 18-mile trail running from St Ives to Cape Cornwall has its origins in the Bronze Age, but more recently was an important highway used by horse and cart to transport valuable ore during Cornwall’s tin-mining boom of the 18th and 19th centuries.

Despite its historic use and suitability for riding along, parts of it are not currently recorded as bridleways which cyclists and horse riders can use.

For this and several other sections along the West Kernow Way, Cycling UK has submitted applications to Cornwall Council for Definitive Map Modification Orders to correct these anomalies from when the rights of way maps were originally drawn up, and ensure the routes are protected for future use by the public.

“Collating the necessary evidence to upgrade omissions made back in the fifties has required sifting through old journals and maps decades – if not centuries – old,” said Sophie Gordon.

“It’s definitely been an interesting insight into Cornwall’s past, but also shows how difficult and complex it is to upgrade rights of way in England. It’s no wonder under-resourced councils across the UK are only correctly recording historic rights at a rate of less than one route a year and is a clear justification for why the Government needs to simplify this process.”

In a bid to limit the risk of coronavirus infection in the region, the charity has deliberately waited until after the summer holidays to launch the West Kernow Way. In doing so, Cycling UK also aims to encourage tourism in Cornwall when it is less busy as part of its role in the European Regional Development Fund, funded EXPERIENCE pilot project.

Cycling UK is one of 14 partners involved in the project which aims to deliver sustainable new off-season tourism experiences in six pilot regions in England and France, which includes Cornwall, Norfolk and Kent. Cycle tourism spending from cyclists in the UK generates £520m per year. There are 1.23 million overnight trips each year, benefiting small businesses in particular, and these contribute £433m to the economy.

Cycling UK intends to launch new routes in Norfolk and Kent in 2022. The charity is already working with the hospitality and accommodation sectors in these counties to provide businesses with free equipment and advice as part of its Cycle Friendly Places accreditation.

These new routes sit within Cycling UK’s wider goal to see the creation of a network of long-distance off-road routes across the length and breadth of the UK, taking in its amazing places and wild landscapes. The three new trails will complement England’s 15 national trails, of which only two are cyclable from end to end: the Pennine Bridleway and the South Downs Way.

In 2019, the charity launched the 800-mile Great North Trail which starts in the Peak District and finishes in either Cape Wrath or John o’ Groats. This was followed in 2020 by King Alfred’s Way, a 220-mile loop route from Winchester that travels through 10,000 years’ worth of history in the south of England and ancient Saxon kingdom of Wessex.

The project will harness the experiential tourism trend to extend the season (October-March), generating 20 million new off-season visitors spending €1 billion across the Channel region by June 2023.

Order your copy of the West Kernow Way guide 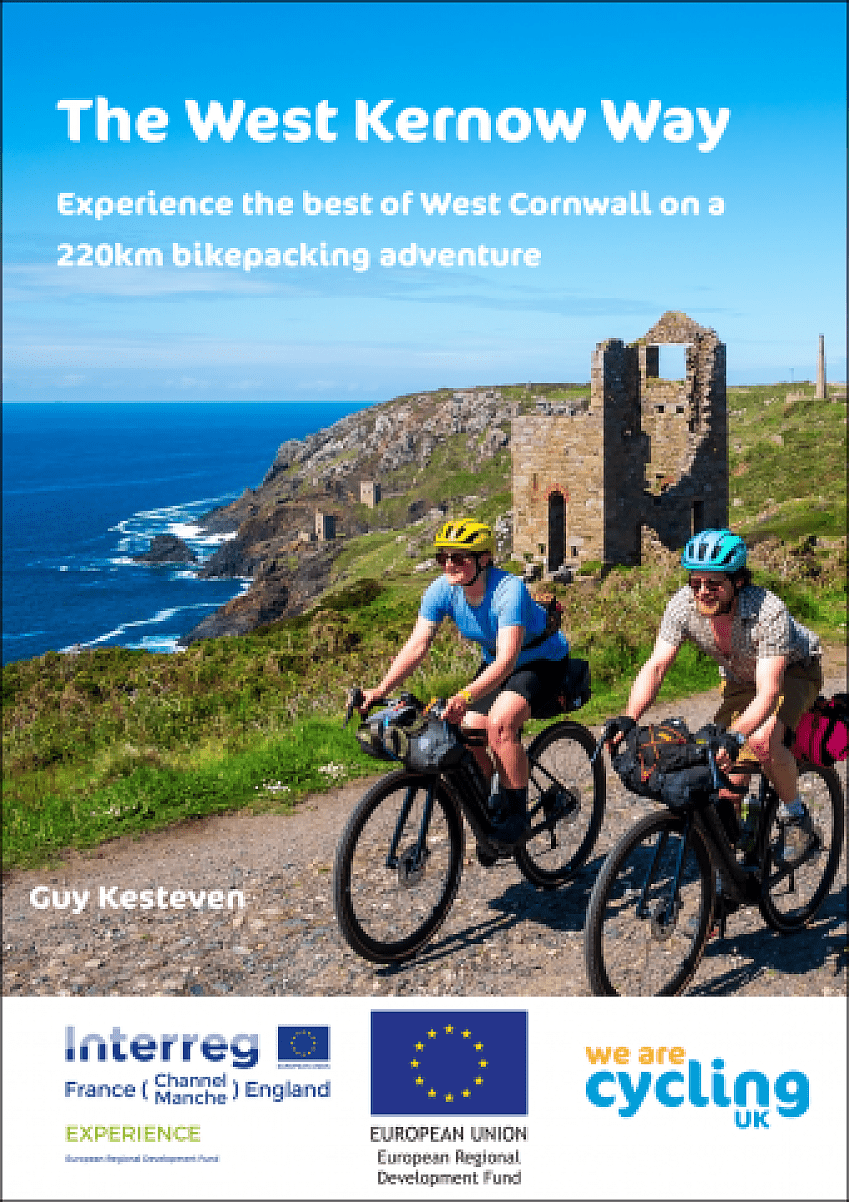 This comprehensive route guide is written by archaeologist-turned-MTB-writer Guy Kesteven, and will open your eyes to the rich history and stories of the landscapes you’ll journey through.

The guide also includes practical advice and suggested itineraries to help you plan your trip, along with detailed maps showing optional detours to make the most of your ride.