CTC Grampian celebrated its 30th anniversary with a Big Bike Ride for Cycling UK members old and young, and those somewhere in between. Photo by John Tuckwood
By Julie Rand
Thursday, 11 April 2019

The first meeting of what was then known as Grampian District Association but is now CTC Grampian, a Cycling UK Member Group, took place on 14 March 1989. Thirty years later, the group is still going strong and now has 450 members and 250 led rides per year in the fabulous countryside around Aberdeen in north east Scotland.

How the group was formed

Long-time Secretary and a former Cycling UK Volunteer of the Year award-winner Sheila Tuckwood describes how the group was formed and celebrated its three decades of organising amazing cycling activities in the area for Cycling UK members. She says:

"A group of riders, already CTC (Cyclists' Touring Club - the forerunner to Cycling UK) members for the most part began informal rides every weekend as far back as 1986. The runs leader at that time was Richard Nicholl. It was Irene Petchey, now Irene Melrose, who proposed that the group should apply to be a CTC District Association, making the point that the group ought not to continue without the protection that the CTC provided. This led to the first meeting in 1989 at which Richard became Chair and Irene our first Secretary. The records show that there were 43 people at the first meeting, which was held in the University reading room in Elphinstone Road, Old Aberdeen and arranged by Andrew Manwell, who was a member of the PE department of the university and a keen cyclist.

"Since then, the group has continued to thrive and is now three decades old. On Sunday 24 March, a Big Bike Ride was organised by the group to celebrate. Fifty-two local riders, friends and family gathered at Easter Anguston Farm café for the ride, which was proposed by long-term member Gerard Vlaar, who very sadly passed away shortly afterwards.

"Four groups for riders of different abilities converged at the cafe, which is run by VSA (Voluntary Service Aberdeen), a local major social care charity. Our youngest attendee was just ten months and the oldest – well, there were a few contenders! Chair John Baghurst spoke about the growth of the group and its activities, from a membership of 156 in 1989 to 450 at present.

"Cindy Blackmore, a founder member and our most regular ride attendee and active runs leader, along with founder-member Sandy Cormack, were then invited to cut the fantastic cake.

"The ride was advertised using the new Member Group toolkit and was also featured in the Aberdeen Climate Week North East programme so we were able to attract some new riders along." 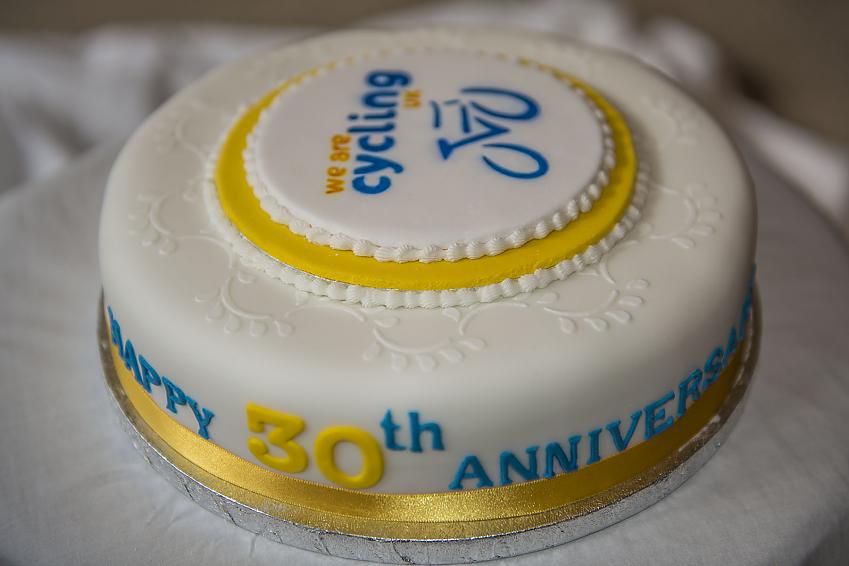 It was wonderful to see so many people from all walks of life out cycling, spanning the generations, everyone enjoying the company and of course the cake!

Cycling UK's Big Bike Revival Development Officer in Aberdeenshire, Emma Roberts, who was also on the ride, said: “It was wonderful to see so many people from all walks of life out cycling, spanning the generations, everyone enjoying the company and of course the cake! Congratulations to Grampian CTC on their thirtieth anniversary – a real testament to the group.  We are, however, all so very sorry to hear the sad news in the week that followed, about Gerard passing.  Gerard was so actively involved in the group, and it was his idea and enthusiasm that set the wheels in motion for the celebratory ride – our thoughts are with his family.”

From its small beginnings, the group is now active and thriving. Sheila explains why:

"Our group offers cyclists in the North East of Scotland an informal, friendly club which provides for all types and abilities of cyclists, to which newcomers are always welcome. Our extensive cycle runs list caters to riders of all abilities, from Try Cycling for those new to cycling to a Faster Full Day on a Saturday and Sunday every weekend throughout the year.

"We also put on Wednesday evening pub runs from May to September, and, in addition, special events such as car-assisted rides, camping weekends, youth hostel weekends and weeks away, which enable us to explore areas outwith Grampian.

"We also meet every week on a Thursday for an easy-paced morning ride of 20-30 miles. The distance and pace of each run can be seen in detail on the rides list. We also organise social events throughout the winter months."

"I would like to thank Sheila and the volunteers from CTC Grampian for their decades of service enabling hundreds of people in the Aberdeen area to enjoy the wonderful benefits of cycling. Their time, energy and skill in helping the group to thrive and grow is much appreciated."

A well-deserved Certificate of Achievement is on its way to the group. Here's to many more years of great riding in Aberdeenshire.