On Saturday 03 February, a group of residents, led by local mother, Rachel Martin, took to the streets to call for safe cycling facilities on Union Street in Aberdeen.

The demo was in response to the council’s City Centre Masterplan, which hopes to transform the city centre to create “greater prosperity and a better quality of life for all”.

Despite its laudable ambition, the current plans include no safe cycling facilities on many of the key roads in the city.

The absence of cycle facilities on Union Street is particularly notable. The road is the city’s main thoroughfare and acts as both an arterial route into the city centre and one of the city’s most popular shopping streets. It has also been highlighted as one of the most congested and polluted streets in the city. 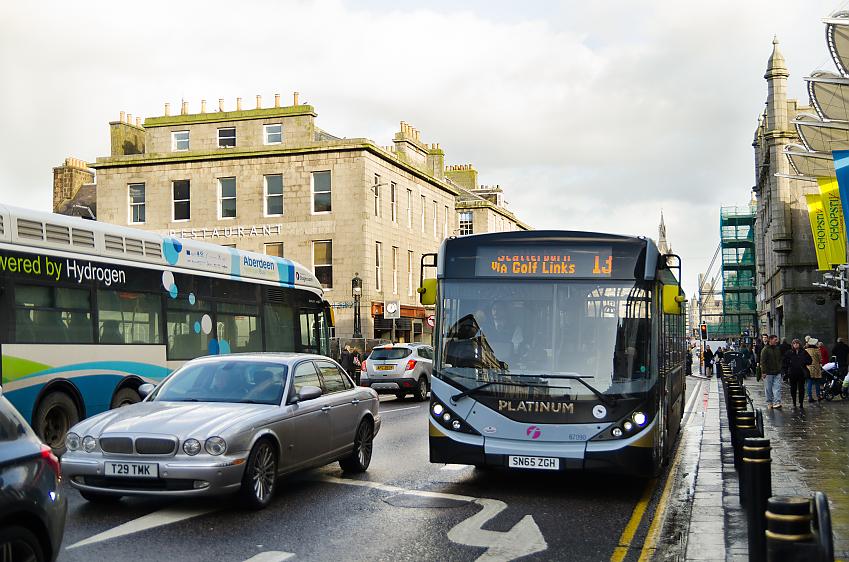 Under the City Centre Masterplan, people wanting to cycle along the Union Street route are instead sent up a series of back roads. The proposed route is indirect and out of sight and is likely to do very little to boost cycling in the city. What’s more, the current plans would not allow Union Street business the opportunity to reap the many benefits of increased footfall from people cycling.

At the demo, Rachel was raising signatures to ensure the matter is raised at Aberdeen City Council’s next full council meeting. So far she has raised over 300 signatures – triple the number needed – which means she will get to address the council when they next convene.

Following the demo, Rachel explained “The protest was about more than just a protected bike path for Union Street. The campaign is really about children and giving them safe places to ride their bikes.”

I wouldn’t let my children cycle to school here [in Aberdeen] and the majority of parents feel the same way. It is outrageous to expect children to cycle next to trucks and buses.

The mother of two continued, “The roads are not safe for children. I wouldn’t let my children cycle to school here and the majority of parents feel the same way. It is outrageous to expect children to cycle next to trucks and buses.”

Cruise Fashion, a local clothes shop, described the proposed bike lane as “a great thing” and Foodstory, a local café, said before the demo, “We feel so strongly about this that we're even tempted to close for an hour and be on the streets with our bikes as well!” 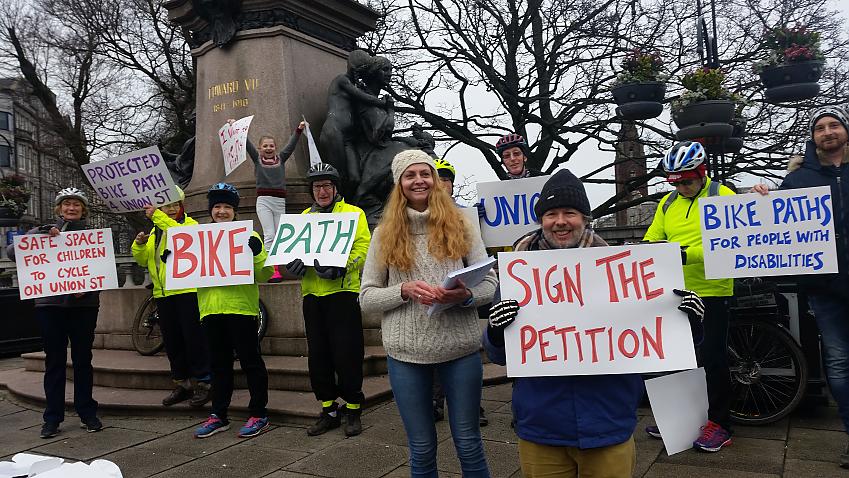 To help Rachel’s campaign, Cycling UK produced a visualisation of how Union Street could look with protected cycle facilities. The image demonstrates that with a little imagination, Rachel’s proposals can easily be put into practice. The road is sufficiently wide for Dutch-style separated cycle lanes and still leaves plenty of space for buses and other means of transportation.

“The Aberdeen City Centre Masterplan has given local decision makers a perfect opportunity to totally rethink how Aberdeen’s public spaces can look, feel and function. By building safe and accessible cycling and walking infrastructure into designs, city centre roads can become thriving places for people to enjoy being in as well as travel through.”

Got an issue in your local area? If you would like to run an event like Rachel’s, please get in touch with our campaigns team who are more than happy to help.

CTC Grampian: Celebrating three decades of cycling and hundreds of new members View
Cycling UK continues to support the UK to cycle
This remains true during this difficult period with the ongoing threat of coronavirus Covid-19
Read our latest advice on cycling
Join Cycling UK to help us change lives and communities through cycling
Membership gives you peace of mind insurance, discounts in cycle shops, rides & routes
Join now