The air was brisk and my fingers felt the nip of winter from aluminium brake levers. Pedalling pal Ian and I were 20 miles into a loop around the Surrey countryside near Frensham. Wondering where to stop for a bite, I spotted a sign on the trail pointing into what looked like a farmyard.

We’d stumbled upon Craft Brews UK, a local brewery based in a Countryside Restoration Trust property, Pierrepont Farm. Soon we were warmly welcomed by the proprietor and placed by the open fire with a beer and some cake, our bikes in easy sight – alongside others.

Clearly we weren’t the first cyclists to pass this way. Master brewer Joe Wood told us that he’d come to appreciate the trade from passing off-road riders, which had risen sharply since 2020. Craft Brews sits right on Cycling UK’s popular King Alfred’s Way (KAW) bikepacking route, which we launched that year. “We love the camaraderie of the cycling community,” Joe said. “Their presence all adds to the vibe and helps bring the brewery alive.”

The patio outside the brewery now features finger-posts telling you how far it is to Winchester, the start and finish of the route (97km or 253km away, depending on direction). There’s secure cycle parking for responsible riders who have one too many and take a taxi home rather than riding while under the influence.

When Ian and I told him we were from the charity behind the route, Joe couldn’t thank us enough for including Craft Brews on the route. His genuineness was as warming as the fire, and we could have happily stayed longer to talk about beer and bikes if we’d had the time. 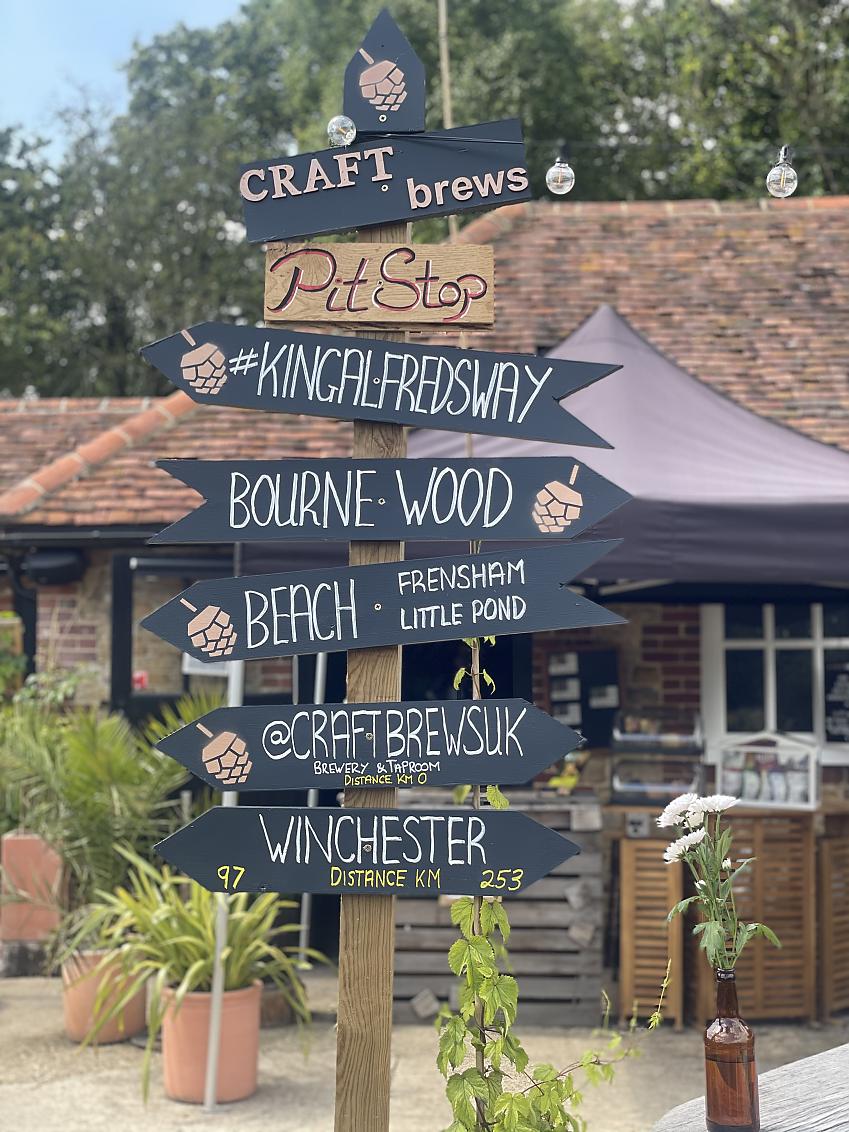 As it was, we set off again. We hadn’t gone 20 metres before we were whey-laid [sic] by another sight: an artisan cheese maker on the same site. John Brown from Cheese on the Wey was offering samples, and seeing our bikes gave us a piece of the cheese he’d made to commemorate KAW: King Alfred’s Yellow Jersey.

This puntastic celebration of curds and cycling was made from the milk of Jersey cows, and he couldn’t think of a more apt name given the flow of bikepackers he’d witnessed along the new route. We enjoyed the samples and loaded our saddlebags with more to be savoured at home.

Both businesses are hidden local gems. Like countless other local shops, pubs, B&Bs and tea rooms I’ve stopped at in my travels, they’re places I’d probably never have visited if I hadn’t been riding by.

When you’re travelling by car, on holiday or otherwise, you’re generally focused on getting from point A to point B. You’re unlikely to notice interesting places en route until they’re disappearing in your rear view mirror at 50mph. By bike it’s different. You have time to spot these places, time to consider visiting, and more incentive to do so. Cyclists need to refuel. We need places to stay if we’re away from home. And when the journey is at least as important as the destination, there’s no reason not to pause.

Cycling is an enriching way to travel because of this serendipity. It takes us places that other forms of transport seldom do. And we’re not the only beneficiaries: cycle tourism contributes to the rural economy in a way that a drive-through coffee and burger do not.

“When you’re travelling by bike you’re not just parachuting into a popular location,” said Cycling UK’s campaigns officer and route finder general Sophie Gordon. “You’re passing through the little towns, villages and hamlets off the beaten trail. Cyclists all enjoy a cake stop or pub lunch, and when we’re refuelling ourselves we’re providing a boost to the kind of independent cafés and shops generally frequented only by locals.”

This isn’t just theory but is proved by numerous studies, which show cycling tourism brings to the UK economy at least £520m per year. That’s the same amount the Chancellor saw fit to allocate to small businesses through his Help to Grow scheme in 2021 Budget. Cycle tourism pays big bucks to the Exchequer, and Cycling UK routes are contributing to this.

“Following the launch of KAW, many businesses along its length saw the opportunities of a new route passing their front door, and began to cater for the increasing numbers of visiting cyclists,” Sophie added. “Our research shows KAW riders on average are spending £84 per day. That’s a sizeable contribution to rural businesses which might not normally see such passing trade.” 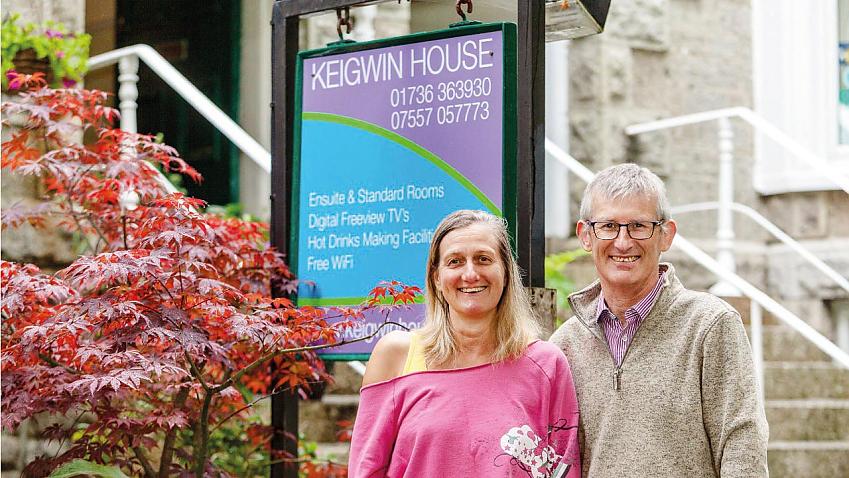 A toolkit for cycle tourism

King Alfred’s Way has been followed in successive years by two new routes in Cornwall and Kent, the West Kernow Way and Cantii Way respectively. A third long-distance route, the Rebellion Way, is due in Norfolk this October.

These new routes form part of Cycling UK’s role in the European Regional Development Fund’s EXPERIENCE project. We’ve been working in Cornwall, Kent and Norfolk to create not just new long-distance routes but also to help the local hospitality sector become more attractive to the two- (or three!) wheeled tourist. Our Cycle Friendly Places (CFP) initiative is especially focused on the shoulder seasons either side of the summer months.

“Through Cycle Friendly Places we’re aiming to provide a minimum standard of provision for cyclists at accommodation and hospitality venues,” said Cycling UK’s project manager for EXPERIENCE, Philip Igoe. “We want cyclists to know that, if they turn up, there will be safe parking and other facilities that make cycle touring that bit easier and more pleasant.”

Cycling UK is currently pinpointing all CFP accredited businesses with an online mapping tool. This should make it easier for cycle tourists to plan their journey to the places that will look after them best. It will be a bit like a digital version of the old CTC Handbook, which also listed cycle-friendly establishments.

“This will drive footfall to the businesses not just in the typical holiday months, but also during those leaner times when the summer rush is over,” said Philip. “It’s not just advice we’re providing to CFP-accredited businesses. We’re also offering: equipment packs worth up to £500, which include toolkits; the means to create secure parking; and, of course, expert advice on how to be more cycle friendly.” 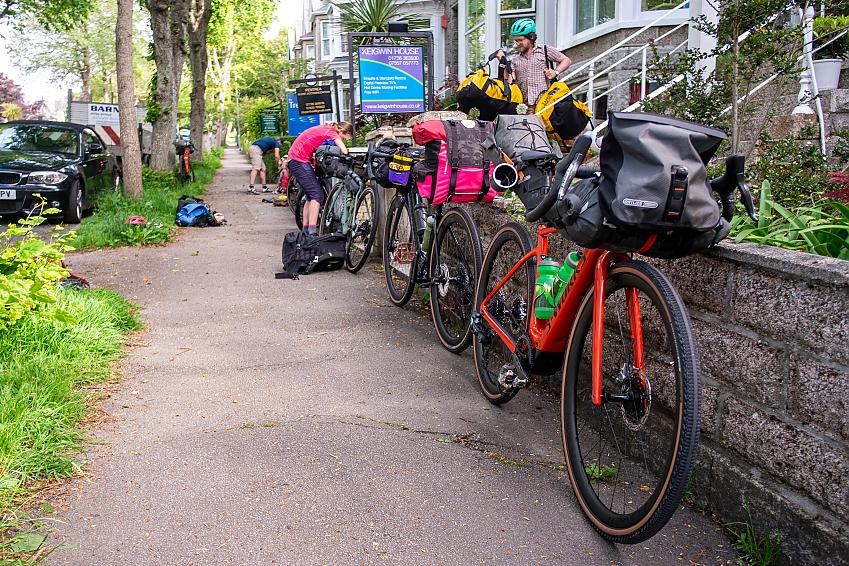 About to set off from Frances and Stuart Brint's B&B, Keigwin House, in Penzance

One beneficiary of Cycling UK’s CFP initiative is Keigwin House in Penzance. This small hotel housed some of the first pioneers along the West Kernow Way. It’s run by cyclists Frances and Stuart Brint, who are keen to welcome those looking to holiday with their bikes.

“We’re amateur cyclists ourselves – but we don’t have enough time to go out like we’d want to,” Stuart said. Instead they do their utmost to make it easier for their visitors to make the most of the Cornish countryside, offering secure parking in a locked garage behind the hotel, tools for straightforward jobs, and a good relationship with Penzance Bike Hire down the road for any major jobs.

“I’m a huge fan of everywhere being more cycle friendly,” said Stuart. “It’s good for the environment and for people’s mental and physical wellbeing. The more areas there are that are cycle friendly – electric or conventional bikes – the more, I’d hope, local economies will benefit.”

When they heard about Cycle Friendly Places, Stuart and Frances immediately signed up. “As a business, it [Cycle Friendly Places] has provided equipment we probably wouldn’t have gone and got. It has encouraged us to look more towards cycling and to offer specifically cycle friendly accommodation.”

Another business reaping the benefit of the passing cycle trade is the community-run Itteringham Village Shop in Norfolk. This village shop has been trading since 1637. It’s still going strong, volunteer Mike Hemsley told me, in part due to the increasing number of cycling customers – especially those using e-cycles.

“We recognise that an ever increasing number of people passing through the village are walkers or cyclists out enjoying our beautiful rural location,” Mike said. “They’re seeking refreshment, a friendly welcome, conversation, and of course our tasty selection of local treats. For us to ignore this passing traffic and not cater to their needs would be a commercial own goal.”

Like Keigwin House, Itteringham Village Shop has taken advantage of the CFP free equipment packs, so it offers customers the use of a professional repair toolkit and secure cycle parking, along with the usual niceties you’d hope for from a cycle friendly place, such as free water refills and use of the facilities.

They’re even prepared to go that extra mile for larger groups of cyclists, as long as they’re given forewarning. Mike asks for a day’s notice so they can allocate staff and stock in anticipation of a visit. Our heritage as a charity is firmly rooted in helping the touring cyclist, and in turn the establishments that cyclists support. But there’s another important reason for our work in this area: it also supports our campaigning. 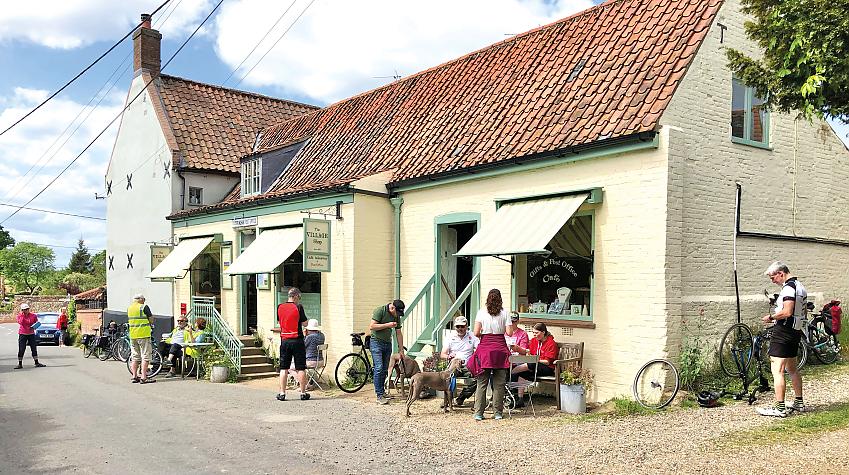 Itteringham Village Shop in Norfolk caters to cyclists of all kinds

“Our routes and work on EXPERIENCE are tangible demonstrations of the benefits that off-road and rural cycling have, not just for visiting cyclists but the businesses and communities they pass by,” said Sophie Gordon.

“In turn, the evidence we’re collecting from this work is helping our ongoing campaigning for increased and improved off-road access at local and national levels in England and Wales.”

The message appears to be getting through. Recently, Tynedale and Ponteland MP Guy Opperman told the Northumberland Chronicle: “Northumberland needs to invest in improving cycling and walking infrastructure to boost the visitor economy and enhance the health and wellbeing of its residents.”

So next time you’re pondering whether to stop for coffee and cake, visit the village shop, or shelter in a B&B, feel no guilt. Take comfort in the fact that you’re doing your bit to help the economy and to support the case for better cycling conditions everywhere.

Here are some of the highlights from Cycling UK’s Economic Benefits of Cycle Tourism (2020) report: