How an off-peak travel pass helped design the Cycle Orbital

Martin on the Lea Navigation towpath (aka Cycle Orbital Arc 2a) at Springfield Park, Hackney

How an off-peak travel pass helped design the Cycle Orbital

Think about cycling in London, and you may conjure up images of city workers zipping along on a hire bike against a cacophony of traffic noise, but it doesn’t have to be that way at all; I like to celebrate the more peaceful side of cycling around the outskirts of the capital.

That’s how I developed Cycle Orbital, a new concept for recreational cycling, showing just how easy it is to leave the city behind and find quiet country roads.

Cycle Orbital’s integrated network works like this: 12 Spokes start from rail stations marking the limit of Transport for London’s Oyster Zone; they take you out to the orbital circuit itself, which is in sections of 12 Arcs, like the hours of a clock face. To tie these rides into the broader region and the national cycle network, there are a dozen spin-offs. All together totalling over 800 miles, they give an almost limitless range of permutations for planning an excursion.

Cycle Orbital can be explored conventionally from a single start and finish point, but using the rail network means you can ‘leapfrog’ the suburbs on one off-peak train, devise a journey and return by another

Cycle Orbital can be explored conventionally from a single start and finish point, but using the rail network means you can ‘leapfrog’ the suburbs on one off-peak train, devise a journey and return by another.

The network was designed with simple ground rules: off-road where possible, otherwise quiet lanes or segregated cycle paths, with all routes ridable on standard bikes. As an antidote to busy city life, Cycle Orbital should contribute to the health and wellbeing of cyclists old and new throughout London and the Home Counties.

Cycle Orbital is not my first foray into route design. In 1977, I submitted the winner of Greater London Authority’s competition to kick-start 1,000 miles of dedicated cycle routes (NB: are we there yet?). This was from Camden to Lambeth via Waterloo Bridge, so the Evening Standard’s headline for its report wrote itself: “Nelson wins at Waterloo”. 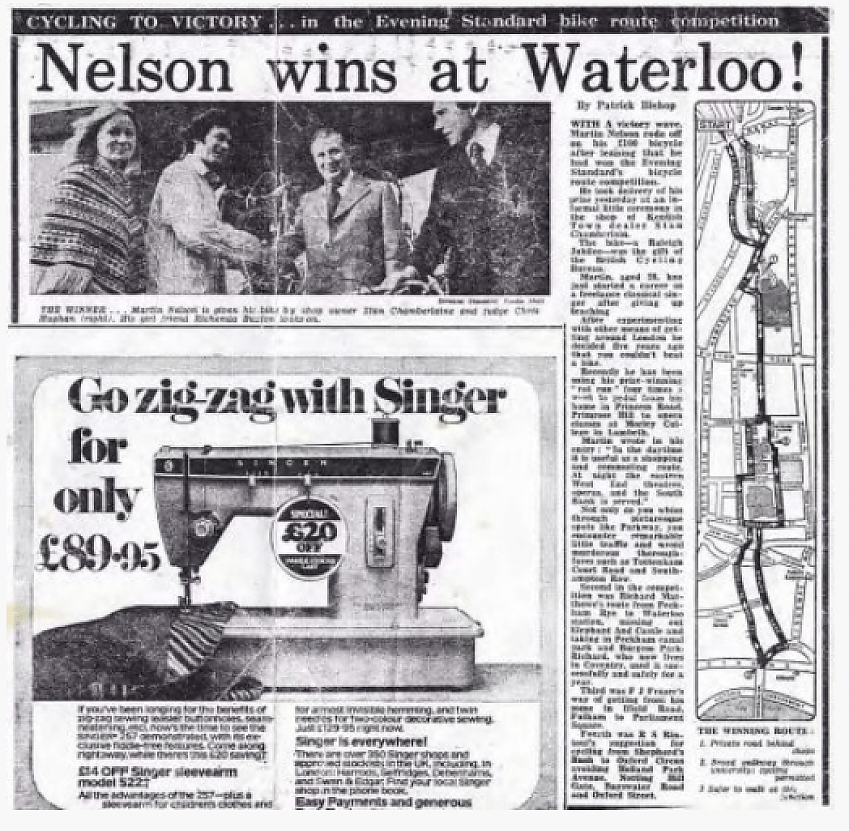 After receiving my Freedom Pass entitling me to free off-peak travel across London, I first used it to revisit childhood haunts, with rides into the Chilterns from the Metropolitan Line. But then I began to explore unfamiliar places, setting off from stations like Crew’s Hill and Knockholt. Soon I realised a coherent system of Arcs and Spokes was emerging.

At this point, the map of Cycle Orbital should have looked like a clock face, but because of the need to cross the Thames there was a big dent in it – and Essex was largely omitted. To correct this, spin-offs were steadily added, firstly to connect in west Essex, then the Home Counties and the National Cycle Network more broadly.

With a bit of advance planning, a trip of any length from five to 50 miles can be devised from Cycle Orbital Routes. The Rides section of the website features a dozen examples for a day’s excursion. All Routes are graded for hilliness, ride surface and off-road percentage; special features and family friendly sections are indicated too. 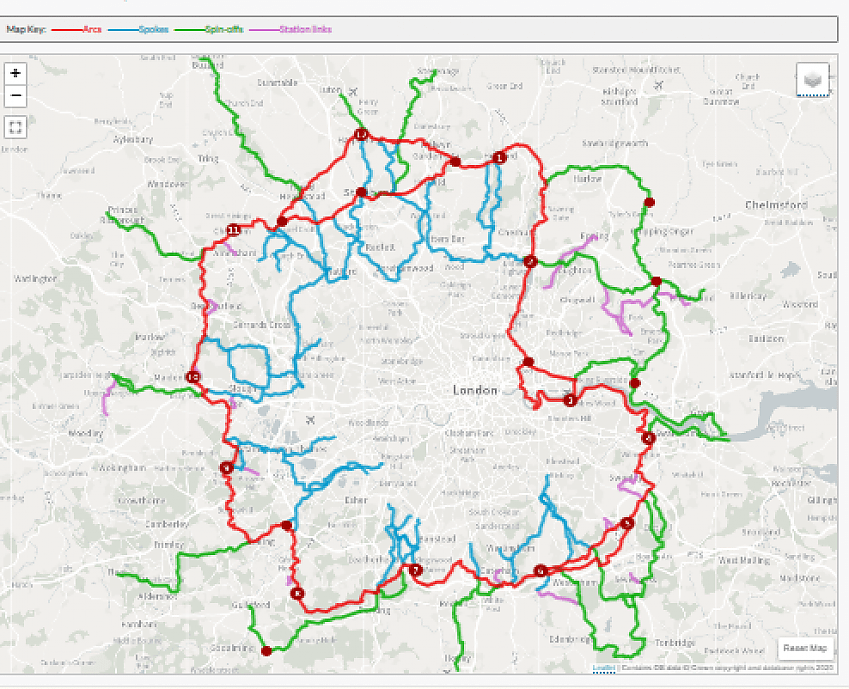 And what will you encounter on a Cycle Orbital ride? The website created with developer Anthony Cartmell lists over a hundred interesting and visitable places, from historic homes to sewage pumping stations, and your ride conditions will vary from gentle canal towpaths to tough downland climbs, from deep rural peace in Surrey, to ducking under oil pipelines on the Thames estuary. In knitting Cycle Orbital together there was the discovery of several link sections of disused road or byway, adding a pioneer spirit to the ride in places.

With half-term approaching, here is an example of a riverside family-friendly ride: Spoke 6, starting at Hampton Court and crossing the Thames to continue on Spoke 6-7 link.

In summary, over 800 miles of off-road and quiet cycling through varied landscapes awaits – often beautiful, always interesting. You will get to know the region in a way no other form of transport allows, encompassing both walking pace observation with the wider picture that a 30-40 miler gives. Here are some Cycle Orbital place names to entice you onto the saddle: Goff’s Oak, Matching Tye, Crazies Hill, Mogador, Halliloo Valley, Blacknest Gate, the Epsom Cluster! Just the names are making me want to get out there and blaze a trail for peaceful cycling.

Create your own unique touring route View
Cycling UK continues to support the UK to cycle
This remains true during this difficult period with the ongoing threat of coronavirus Covid-19
Read our latest advice on cycling
Join Cycling UK to help us change lives and communities through cycling
Membership gives you peace of mind insurance, discounts in cycle shops, rides & routes
Join now