Culture, cycling, and Cockney pubs: that was the programme for Harry Lyons’ tour of the old music halls of London’s East End in autumn 2019

I’ve got a luvverly bunch of... cyclists! On a bright autumn day we set out from the The George in Wanstead, fuelled by full English breakfasts and ready for a day in the saddle.

Perhaps not so much ‘luvverly’ as ‘loved’, a term used to describe well-worn, second-hand goods. Between us we sported replacement hips and knees, hearing aids, and brain damage (the result of a cycling accident). One of us was recovering from labrynthitis, another from a stroke. In other words, a not untypical bunch of old geezers.

But none of us had Two Lovely Black Eyes and If It Wasn’t For The ’Ouses In Between we could’ve seen ’Ackney, where we were heading. Yes, it was a Spa & Pampering group day out to investigate the remnants of London’s East End music halls.

A proper cup of coffee

Our first venue was Hoxton Hall. Built in 1863, it had a programme that was intended to be both entertaining and educational – not unlike our days out. It failed, was closed, and reopened in 1866 as a music hall featuring some of the major ‘artistes’ of the time. This was so popular that, in 1867, it was heightened by another floor.

John Earl, former Director of the Theatre’s Trust, says of Hoxton Hall: “The building has been continuously active, with only short breaks, in a variety of roles, but always managing to accommodate some kind of public entertainment since it was built in 1863.” 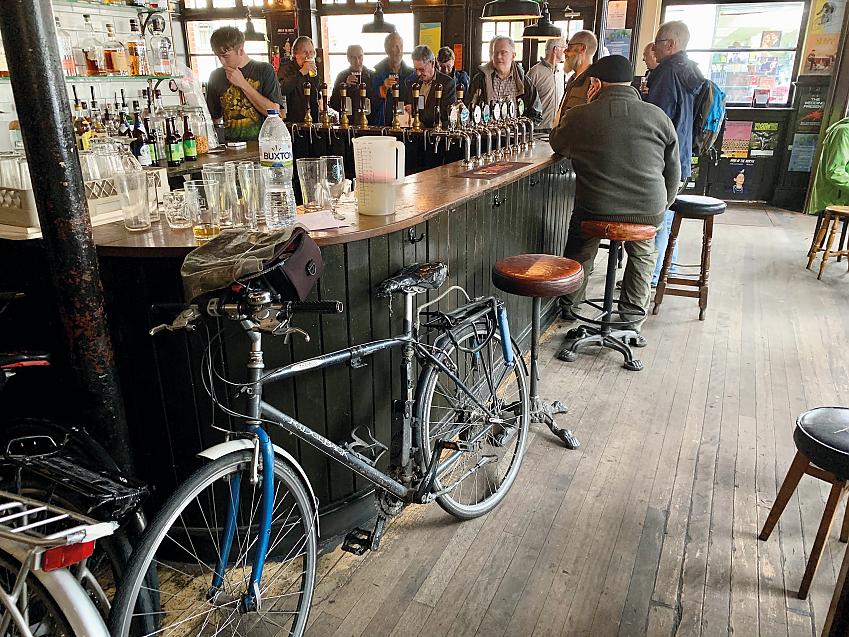 It continued to accommodate “some kind of public entertainment” that morning as our cycling ukulele mavens took the opportunity to climb on stage and give us a medley of popular music hall songs including, appropriately, Bubbles (we have a few West Ham supporters) and, inappropriately, Champagne Charlie. (We hadn’t started on the pop at 10.30am; we were having coffee and cake.)

Next up: the Eagle on City Road, once a music hall of ill-repute. It was an early venue for Marie Lloyd but, in 1884 – shock, horror – the building was bought by General Booth and turned into a Salvation Army centre. After 17 temperate years, the Sally Army gave up, the building was demolished, and the present pub erected. Although the weather had turned intemperate between venues and we’d received a soaking as we cycled up and down the City Road, in the spirit of General Booth we never went in but stayed resolutely out of the Eagle.

Sing as we go

Next on the agenda was the magnificent Hackney Empire, designed by Arthur Matcham, the pre-eminent theatre designer of the time, and opened in 1901. Unfortunately they wouldn’t let us in. Not because we’re such a disreputable bunch but because TV crews were filming inside that day. So we settled down in the Cock Tavern next door with our bikes leaning against the bar.

Song sheets were distributed. Nigel rattled off Roll Out The Barrel on the old joanna while massed ukes (Russell and Andrew) hammered out Don’t Jump Off The Roof Dad, With Her Head Tucked Underneath Her Arm, and other music hall favourites.

Back on the bikes we skirted London Fields, cycled carefully through the hip cafés of Broadway Market (not wanting to make waves on their flat whites), and down past Haggerston Park and Hackney City Farm on narrow, busy roads. Our destination was the junction of Vallance Road and Whitechapel Road, where the opulent Pavilion Theatre once stood. 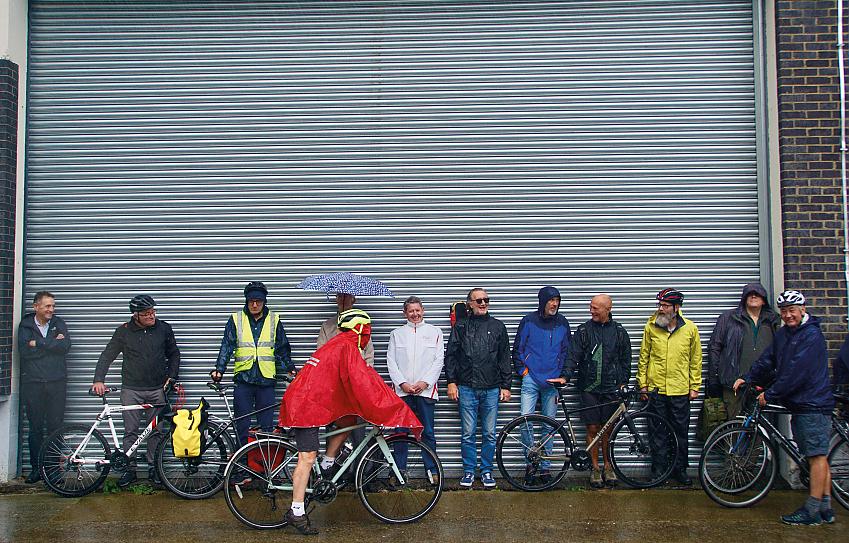 Built in 1827, the Pavillion was rebuilt in 1858, 1871 and 1894 before closing in 1934. It was destroyed by bombs in 1940 and finally totally demolished in 1962. It’s believed that the side entrance in Vallance Road still exists behind sheeted scaffolding. Once a Jewish Theatre – like the Wonderland, the Jewish music hall a little further along Whitechapel Road – it would have contributed much to popular culture.

The Jewish East End has largely disappeared but it remains a vibrant, bustling community, and beneath the garish, modern shop fronts, the remains of a bygone era can often be spotted. We passed the site of the Wonderland, now a new-build Barclays Bank, as we pedalled along Whitechapel Road on bike path CS2.

Within easy cycling distance of our home base, there are quite a few sites of music halls that no longer exist: The Paragon Theatre of Varieties on the Mile End Road; Queen’s Music Hall at Poplar; the Royal Albert at Canning Town; and the Eastern Empire at Bow. We could easily have incorporated them into our day, but once you’ve seen one music hall that no longer exists, you’ve seen them all. So it was off down the Mile End Road to a site that never even was a music hall, the Half Moon pub.

Built originally in 1900 as a Welsh Methodist Chapel, it was converted into a theatre to house the Half Moon Theatre Company in 1979. Despite the fact that the Half Moon has now been a pub longer than it was a theatre, we didn’t partake. We wanted to beat the rush hour traffic. Even on a cycle path, the Mile End Road is no fun.

We slipped off onto a side road as soon as we could, then headed for the Regent’s Canal, which took us north to Victoria Park and then, via the Lea Navigation Canal, into the Queen Elizabeth Olympic Park. We skirted the velodrome and exited onto the quiet streets north of Stratford, making our way to our final stop of the day, a ‘spa’ with a large beer garden. We parked the bikes (in yet another torrential downpour) and, with 21 miles in our legs and only minutes from home, proceeded to get immoderately pampered.

Do it yourself: Urban touring

Cycling with a group in a city needs planning. Once you have your theme and a list of destinations, ride the route to check for building works and roadworks that might affect your ride. Check out bike parking. Ensure the institutions you visit can handle the group size. Support the less confident in your group in traffic. Keep your speed down. Groups can easily split up in busy traffic and at junctions.

Conditions: Roads were busy, weather very busy. It was the late September monsoon season.Equipment:I rode a chunky Tern Verge Tour but for this kind of cycling, Any Old Iron will do.

I’m glad I had...Membership of Cycling UK, therefore third-party insurance. While London roads are busy, traffic is slow. On traffic-free routes, however, pedestrians are unpredictable and some cyclists positively dangerous.

Next time I would...Slather on chamois cream or wear bike gear. Or both. Riding 21 miles in civvies took its toll on my nether regions.