Laurence Kilpatrick rode up the hill at Alexandra Palace – many, many times

I had committed to the longest ride of my life, one that included three times the amount of elevation I’d ever managed in a single day. I was about to Everest the North London lump known as Ally Pally. I ignored the naysayers. A short sample: my chosen hill wasn’t steep enough; too much flat was involved; I hadn’t trained enough (at all!); I hadn’t thought it through.

The night before the attempt I ate my body weight in curry. At 2am I was out in the chilly London night. The streets were empty and I made excellent progress. Dawn broke at 6.30am. I had scaled over 2,000 metres – a quarter of the ascent.

In the last hour, with only ten loops left to do, I began to think I might fail. I ate sugary gels. Friends pedalled alongside me. Their support was vital

Right on cue, a friend arrived to pace me up the hill for a few hours. My conversational skills were already limited. He stuffed me full of food every 30 minutes and steered my thoughts away from towel-chucking.

Celebratory landmarks brought only gloom. Little joy can be taken from passing the 4,400 metre mark when it’s 1pm and you still have ten hours of cycling uphill to contend with. My mood swung up and down.

Darkness fell on a roasting day. I was left alone with the hill. Ally Pally turned into a playground for the fast and the furious – car drivers, that is. I continued to toil: “Just one more lap, then see how you are,” I told myself. 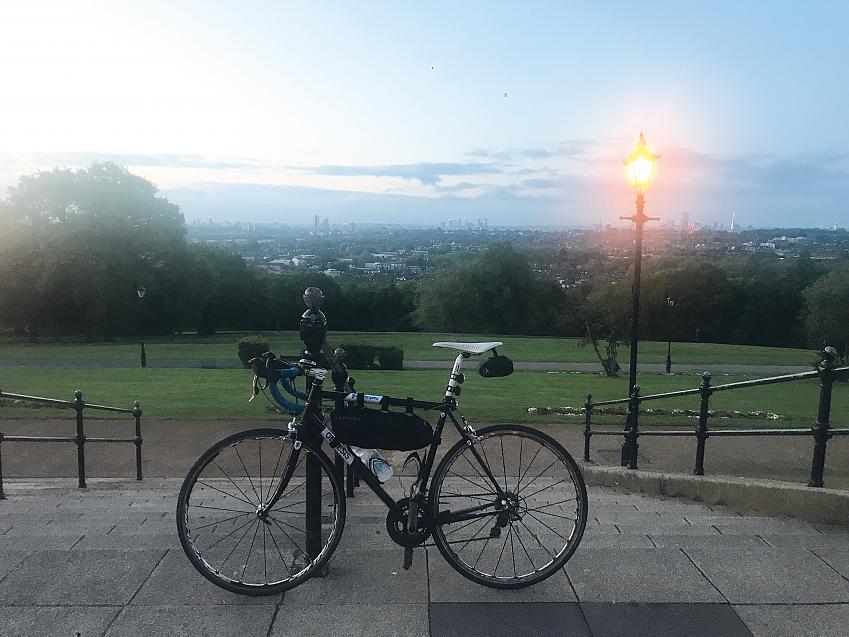 Dawn breaks: a mere 6,800 metres left for Laurence to climb

In the last hour, with only ten loops left to do, I began to think I might fail. I ate sugary gels. Friends pedalled alongside me. Their support was vital.

A sudden surge of energy coursed through me on my penultimate lap. I dropped my comrades and pelted up the nauseatingly familiar hill. Out of nowhere, tears spilled, relief that I would soon be able to stop pedalling. I fairly sprinted up the final ascent and tossed my bike down onto the grass, looking out over London and collapsing onto the floor. After 350km and 8,848m of climbing, I had just completed the hardest day of cycling in my life.