Create your own unique touring route

Create your own unique touring route

The 'stay at home' message doesn't mean cycle touring plans are on hold. Follow member Kathie Knell's example: she's spent her time in lockdown devising a new route to combine her love of cycling with visiting archaeological sites when restrictions are lifted

Taking inspiration from Cycling UK’s latest route, the King Alfred’s Way which guides riders through historic Wessex, Cycling UK member Kathie Knell has plotted her own epic route taking in as many prehistoric rings or stone circles on a from Stonehenge to the Lake District.

Kathie believes the route closely follows one which our Neolithic ancestors would have taken to transport livestock and goods from north to south as part of a journey to celebrate the solstice. Kathie has studied ancient maps to put together the 555km (345 miles) Way of the Rings route and is putting together a cycle touring guide for others interested in riding it and learning more about these mystical landmarks.

Using the megalithic map of England, the proposed route follows the highest concentration of historic features en route to Stonehenge. There is archaeological evidence that pigs and cattle originally farmed in the Lakes were slaughtered hundreds of miles away at Durrington Walls 'Superhenge' during the building and feasting at Stonehenge.

According to English Heritage: “The animals are likely to have been herded to the Stonehenge area, which would have been much easier than slaughtering them first and transporting the carcasses. People were herding animals over long distances, perhaps even bringing them by boat. People across Britain must have known about Stonehenge and travelled there from afar, whether to help build the monument or to take part in ceremonies and feasts there.”

Many Neolithic monuments constructed thousands of years ago survive to this day, taking on many forms.

“Already there is a clear route which appears, with stone circles, cursus, rock art, caves, megalithic chambers and standing stones throughout the route,” says Kathie. “This not only adds interest for cyclists but also recreates a possible significant North to South route which would have been taken regularly, especially to celebrate the solstice at Stonehenge.”

Kathie has broken the route down into a possible five-day tour, though she stresses it could be tackled over two long weekends or in smaller sections.

Kathie says that on most sections of the route, there is a point of historic interest every 10km or less, and the route uses mainly back roads with some sections off-road like parts of the Ridgeway and on canal paths, near Skipton for example.

There is a section in the middle of the route where there is less of a proliferation of intact monuments, which could be because examples have been lost due to development; however riders can also take a train and skip this part if they are limited for time.

The route has been cross-referenced using OS and Bikemap, and the Neolithic database, which Kathie says has been an "incredible tool" to help identify way points.

Due to current lockdown restrictions, Kathie has only ridden a small part of the route near Stonehenge, but hopes to do a recce ride around Easter, if travel restrictions allow. "The section I am most looking forward to riding is the area between Ilkley and Matlock,” she said. “I can’t wait to see the many standing circles there."

Although much of the research has been completed from home, Kathie would be grateful for any help from Cycling UK members living along the route who might be able to recce small sections, take photographs of circles or sites of interest or suggest additions. Given the current government advice on non-essential travel, people should only be riding small sections of the route as part of their daily outdoor exercise if it passes through or very close to where they live.

If anyone might be able to help with information about the ride or historic sites of interest, please contact Cycling UK to be put in touch with Kathie. 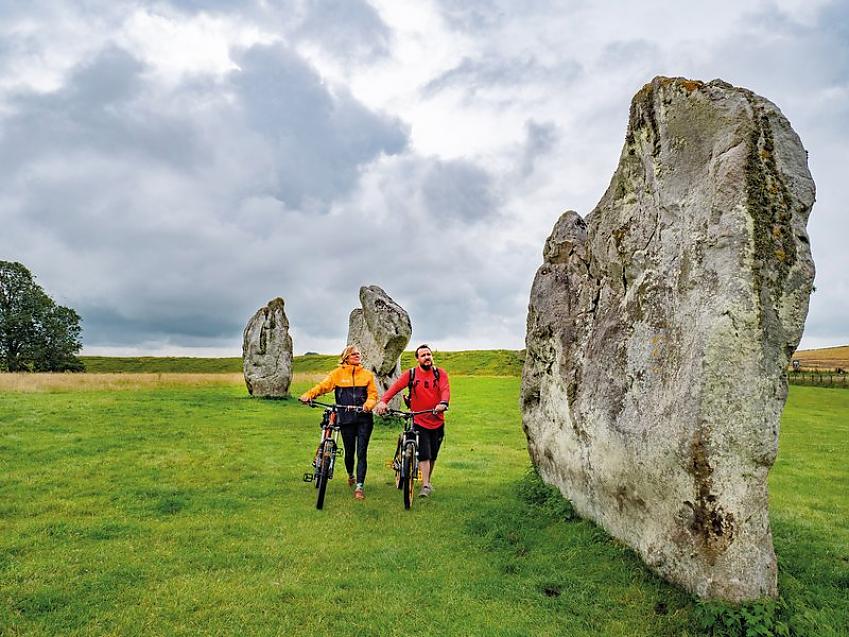 Kathie had been looking forward to tackling the King Alfred’s Way route, but now plans to focus on it once she has completed the work on the Way of the Rings. She has been cycle touring with her husband for several years, and says the original idea for her route came while visiting the giant standing stone at Rudstone in the East Riding of Yorkshire, the tallest megalith in the UK, while riding the Coast 2 Coast.

“I see this as an in-between route for those touring cyclists who have done the Coast 2 Coast and maybe have thought about LEJOG (Land's End to John O Groats). When restrictions allow, you could tackle it over a series of long weekends with plenty of opportunity to break the cycling with ancient tourist attractions. It has intrigue and mystery along the way, with a plethora of unusual burials, cursus, rock art and standing stones to stop at,” she added.

The former army Lt Col has always had a passion for adventure and archaeology. When she's not cycling, she can be found mountain marathon running and mountaineering, having completed the Everest Marathon, the Marathon Des Sables in Sahara. Once the guide has been completed, hopefully later this year, she is also planning to cycle Cairo to Cape Town next year. Now living near Salisbury, Kathie knows the areas around the start of the Way of the Rings well, and having previously lived in the Dales and walked around the Lakes and Yorkshire, she is also familiar with the end of the route.

Stonehenge and Avebury stone circles also feature in the King Alfred’s Way route which starts and ends in Winchester, where the Anglo Saxon ruler Alfred the Great is buried.

Do you have your own idea for a route linking to places of significance to you or taking in historical areas of interest? If you are looking for a project to work on during lockdown, why not research and devise your own route to reflect your own preferred style of cycling?

There are a wide range of free mapping websites and apps that make it easy to plot your own route. While our horizons may be somewhat limited at present, our imaginations don’t have to be, so send your possible multi-day route ideas to us.