B10 CCC members celebrating after one of their challenges.
By Thomas Page
Thursday, 6 June 2019

Nasaar Mahmood is a finalist for the Exceptional Individual - Cycling Programme category at the 2019 Cycling UK Volunteer Awards. As the founder of B10 Community Cycle Club, Nasaar is helping more people get cycling in Small Heath, Birmingham.

Cycling UK-affiliated B10 Community Cycle Club (named after the area's postcode) is almost the very definition of a grassroots, community-based cycling club. The group initially started with just Nasaar taking his children for a cycle around the park. His brother and his children soon got involved and the club has grown from there.

With a focus on community, as well as cycling, one of the club's primary methods of drawing in new participants has been simply chatting to people as the group makes its way around the park. This has led to a friendly and supportive atmosphere within the club, as well as a sense of family unity within the Small Heath community. 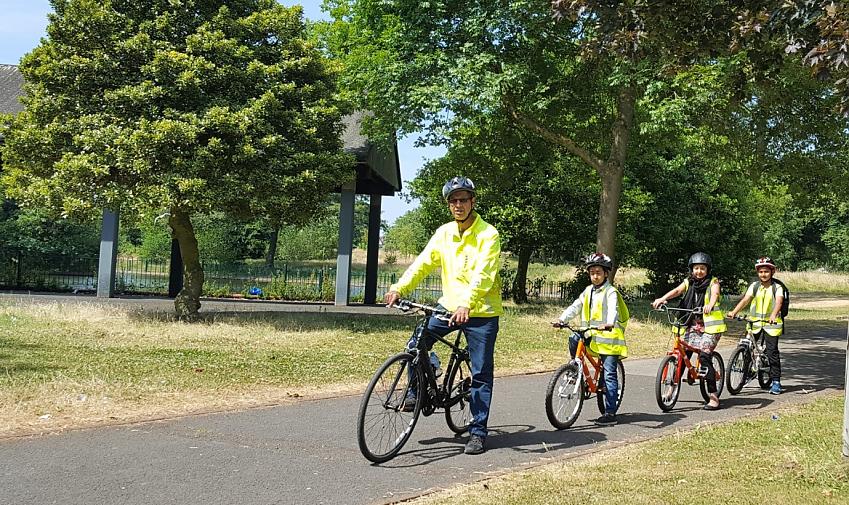 Nasaar's dedication to cycling has led to a big increase in riders in Small Heath, Birmingham

To support the growing popularity of the club, Nasaar has trained to become a qualified ride leader and National Standard cycle instructor. B10 CCC has also built up a reliable team of volunteers to support the group's growing numbers.

Nasaar takes any children or adults that need to learn to ride into the 'Multi-Use Games Area' of the park to help them improve their skills.

Nasaar's brother is now also a qualified ride leader and several other volunteers help on an informal basis. The club offers occasional mini challenges within the park, complete with trophy and medal ceremonies. With over 50 members participating in the clubs Thursday rides, it's clear that it is a huge success, thanks to the hard work of Nasaar and the other volunteers.