Many of today's bicycles are disposable, lasting just a few years or even months. Isla Rowntree's Imagine Project wants to change that as Victoria Hazael discovered when she visited Islabikes in Ludlow.

Imagine what will happen to your bike when you no longer want it. You might sell it or donate it to a bike recycling centre. Yet whatever you do, eventually its raw materials – steel, aluminium, rubber, and oil – will probably one day end up in landfill. Those finite resources will be trapped in the dump. Isla Rowntree’s Imagine Project wants that to change.

The former cyclocross champion, eponymous children’s bike designer, and longstanding Cycling UK member is concerned that within two decades those limited materials will become scarce and the price we pay for bikes will be out reach for most people. Isla wants to find an alternative to the ‘take, make and dispose’ model that the cycle industry all over the world currently follows.

Inspired by the sailor Ellen MacArthur’s book Full Circle and by a sustainable business manufacturers’ conference in Cambridge, Isla kept thinking there must be solution to just throwing bikes away: "It niggled and burned away at me, having seen this future problem for the cycle industry and the world. Knowing a possible solution, I felt I had a responsibility to act on that. In the time that I didn’t act on it, I started to feel irresponsible for not doing anything."

According to Isla’s research, within a decade there might be material price volatility that would affect her successful children’s brand Islabikes. Yet it might take three to five years to work out a solution so that families could still afford bikes for their children. "It started to feel urgent," she said. "Rather than waiting for the crisis to come, I set aside a team of people and a separate space and launched the Imagine Project as a concept." 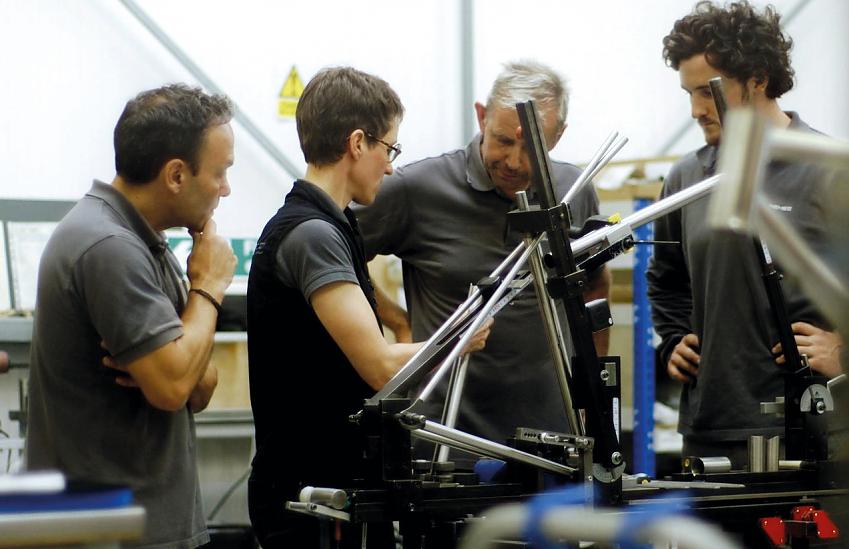 The Imagine Project’s plan is to make a bicycle that can be: manufactured in the UK; ridden to school and back for 50 years by as many children as possible; and, at the end of the bike’s life, separated into usable materials.

"We want to rent bikes to families," Isla said. "Then as the child grows, they can exchange it for a bigger size while we refurbish the old bike and rent it to another child. The bicycle circulates between lots and lots of users for a very long time, and those raw materials are being used for cycling not sitting unused in a shed."

Isla is a businesswoman so this needs to work both economically and environmentally. The rental model incentivises a family to use the bike and then give it back when they don’t need it anymore or the child grows out of it. No more waiting for a child’s birthday or Christmas to move on to a bike that fits. Maximum longevity will be needed from the bikes in order for Islabikes to turn a profit.

I visited Islabikes in Ludlow. The Imagine Project is separate from the main Islabikes site, an industrial unit with no sign to advertise the innovative work going on inside. There are huge machines and lots of tubes of Reynolds steel. It’s a noisy place, where some of the small team of five are busy learning the difficult task of perfectly TIG-welding beautiful steel frames, only to try and break them to test how sturdy they really are.

I have a bike that is 50 years old and it has all the same components except tyres, and it still works really well, so it feels like it should be do-able.

Is the 50-year target a pipe dream, I asked. Isla smiled. "I have a bike that is 50 years old and it has all the same components except tyres, and it still works really well, so it feels like it should be do-able. There will be elements that last longer or elements that last less – we want a realistic stretching goal to push ourselves to try hard to design all the parts as well as we possibly can."

As part of the test, Isla has built herself an adult-sized prototype that she is putting through its paces daily to see how it fatigues. Also, a few early adopters of the Imagine Project will be receiving their Imagine 20 children’s bikes to test this autumn. "We need to start small," Isla said. "The first bikes won’t be perfect. We don’t want to make lots of things that aren’t right. We will get it out there and get learning. Once we have got the product technically right, we can upscale."

On closer inspection, the Imagine 20 prototype is as impressive as it is shiny. It retains the Islabikes frame geometry, easy to pull brake levers, and chainguard that my daughter loved so much when we tested the Cnoc (Feb/Mar 18). Every part of the Imagine 20 is chosen with sustainability and strength in mind. Current Islabikes are made from aluminium, which has a shorter fatigue life than steel. So the Imagine 20 frame and fork is made from Reynolds steel.

At the end of the bike’s life, the Imagine 20 is designed for separability, not just recycling. That means that every part can be used to make something useful, not just recycled into a lower grade version (that will end up in landfill a bit later on).

Setting the highest standards makes life difficult. After researching how to separate paint from a bike frame, Isla is now opting for polished stainless steel, bead blasting the logo on the frame using a mask instead. This means that there are no separation issues, and they can simply polish out any blemishes and scratches.

The aspiration is a zero-maintenance children’s bike. (At Cycling UK, we know from our Big Bike Revival project that not knowing how to fix a bike is a major factor in many people not cycling.) The Imagine 20 has internal hub gears and drum brakes. If there are problems with the bike, it will be sent back to Islabikes. Because that costs the company extra, they are doing all they can to make sure it doesn’t break very often.

In times gone by, bikes were designed and made in the UK. Currently only Pashley and Brompton manufacture here on a large scale. There are lots of smaller builders, of course, while other companies – including Islabikes – merely assemble their bikes in the UK. ‘We get our products made in South East Asia as that is where the cycling manufacture expertise is,’ Isla said. ‘But we transport them halfway round the world. That only works as a business model because there is a disparity in wages between South East Asia and the UK. That gap is now narrowing, and there will be a point in time when it would be more sensible to make them here.’

The discoveries the project makes will be shared with others in the cycle industry and beyond. "We are committed to transitioning to a circular supply chain, and hope that by leading the way others will follow," Isla said. The Imagine Project is looking for others to contribute. Islabikes are already working with Reynolds and Brooks.

For the next generation

Talking to others in the cycle industry, who did not want to go on the record, the Imagine Project is applauded for bravery but seen as a bit of a gamble that will not pay off in the short term. It appears too risky for most bike brand’s investors, who are looking for a quick return.

Isla’s sense of personal responsibility for the business she built, by taking risks in the early years of designing bikes in a barn, is strong. She now employs around 40 staff in Ludlow and feels she owes it to them to have a go. ‘Even if we don’t make it work, someone else can take the baton on and take the learning from it,’ she said. "What motivates us is a personal sense of responsibility for the future. It is easy to think someone else will do something – but it’s a sense of responsibility to my colleagues. I might retire before the problems happen, but a lot are much younger than I am. It is their future."

One thing’s for sure: Isla doesn’t want to imagine a world where kids don’t ride bikes. "When bicycles become so expensive that most families will not be able to afford them, children won’t be able to cycle. That would be a real, real shame," she said.

The Imagine 20 - Durable by design 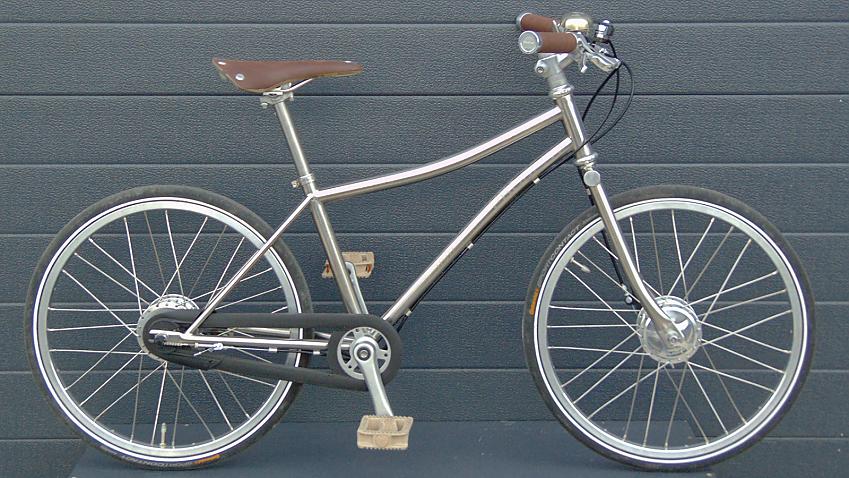 The Imagine 20 is a prototype and a testbed for different technologies and design ideas. The long-term mission is to meet the following five key criteria for every element of the bike: sourced and manufactured locally; longevity; circularly sustainable materials; designed for end-of-life separation; and a superb user experience.

Frame and fork: 70% recycled Reynolds stainless steel. Manufactured in Birmingham, which limits transport costs (in every sense), stainless steel resists corrosion well and has an excellent fatigue life. It can readily be recycled.

Drum brakes: Enclosed from the elements, they eliminate rim wear and have excellent padwear rate. The adult model being tested on the Imagine 20 is larger and heavier than is ideal for a child’s bike.

Pedals: Manufactured from reprocessed rice husks in Taiwan. The manufacturing process might be replicable with a byproduct of corn from UK agriculture. 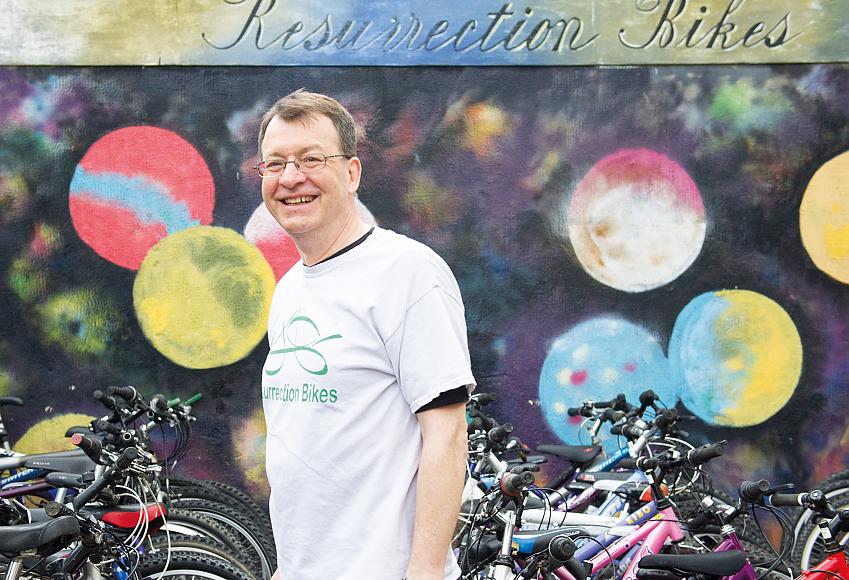 What about bikes that have already been abandoned? Cycling UK’s Big Bike Revival has been running for four years to inspire the 42% of people who own bikes but who don’t ride them. Last year, it reached more than 64,000 people and fixed more than 1,600 bikes that were destined for landfill.

Resurrection Bikes in Harrogate is one of many centres that has had busy summer running Big Bike Revival events. ‘There are very few bikes we can’t fix,’ said founder John Rowe, ‘but we take bikes with cracked, bent frames or stuck seatposts and strip them for usable bits.’

Most of the bikes that people bring are fixed up and ridden away. Resurrection Bikes give the rusty bikes that won’t sell to another charity that teaches cycle mechanic skills to people in prison. What ends up at the dump? "Only tyres that are rotten," John says. ‘"he rest of the stuff like chains, cassettes, handlebars, stems, mudguards, we keep in for spares or to be made into something else." It’s a challenge but John’s wife Heather Rowe has now learned how to weld and braze, and she makes jewellery from old aluminium and bike bits. What started as a fundraiser for their daughter’s gap year now has 34 volunteers, all working hard to stop bikes in Harrogate ending their lives in the dump.