Great Rides: Down the Danube Cycleway

Great Rides: Down the Danube Cycleway

At the age of 73, Cass Gilbert’s mum had never been cycle touring. Cass took her on a trip down the Danube Cycleway

When I read about veteran cyclists touring into their later years, I’m always impressed and inspired, hoping I’ll have the vitality to do the same myself. But I’ve not heard about anyone in their seventies taking up cycle touring for the first time. I’m proud to say my mum, at 73, has done just that.

As a parent, she’s watched me cycle off into the world for the last couple of decades, but it wasn’t until last summer that I received a most unexpected email: “I’d like to do a bike tour with you. Can you think of anywhere suitable?”

A 340km portion of the Danube Cycleway (Donauradweg) – between Passau in Germany and Vienna in Austria – looked like it would be perfect. The fact that my older sister, her husband, and their two children live in Vienna sealed the deal: visiting them would be the perfect ‘reward’.

Renting an electric bike seemed like a natural progression to the plan; it would allow us to cover a reasonable distance each day and keep pace with one another. 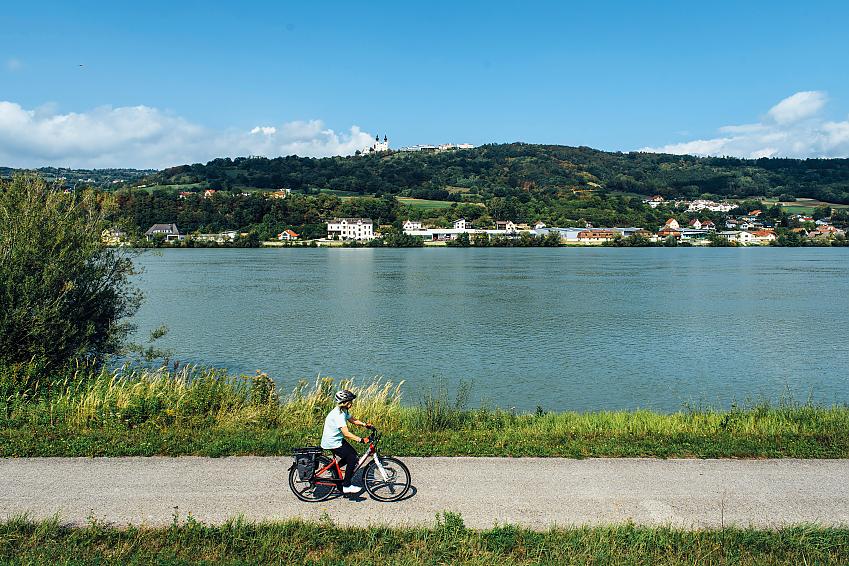 Cass's mum e-bikes her way along the river

Tales of the riverbank

Fast forward a couple of months and it was time to leave Passau, our gateway to the Donauradweg. I can’t, unfortunately, claim we were introduced to the cycling utopia we’d been expecting.

For most of the route, riders can choose between cycling on the north or the south bank. We chose the flatter, northern side out of Passau. But although the bike path is technically separated from the road, there was enough heavy traffic that it wasn’t relaxing. Certainly, it didn’t yet live up to the images of bike paths meandering enticingly by the water’s edge…

The next morning, we took the first of many ferry crossings and enjoyed a far more relaxing journey. Within a couple of days we were getting into the swing of things, plotting which side of the river suited us best, building up confidence in the saddle, and enjoying the simple rhythm of a bike tour. We’d start with breakfast in the guesthouse, map opened before us. A coffee and perhaps an apple strudel as a mid-morning treat. A picnic lunch by the river edge at lunch. Then a last stint of riding, before plugging in mum’s bike at the guesthouse and tucking into dinner.

I loved the spontaneity, the unhurried pace and freedom.

The Danube Cycleway is a popular route, and we particularly enjoyed being a part of the ebb and flow of riders. We spotted the same couples or groups at different times of the day, nodding as we passed one another other in different cafés or picnic spots. It sees up to 600,000 cyclists a year, the majority of whom visit in July and August. By mid September, when we were there, it’s considerably quieter, which meant booking accommodation on the fly was easier. This was just as well, as we had absolutely no idea of our range each day, being our first tour together. Often situated on the banks of the Danube, all of the gasthofs were welcoming, characterful in their own way, and of course, they accommodated our bikes without so much as a raised eyebrow.

Searching out local food also became a goal of the week. Instead of deferring to the omnipresent pizzerias, we favoured traditional Austrian and German fare instead. One night it was fresh hake from the Danube, another dumplings, wienna snitzel, and sauerkraut. This is a ride where you’ll never go hungry. 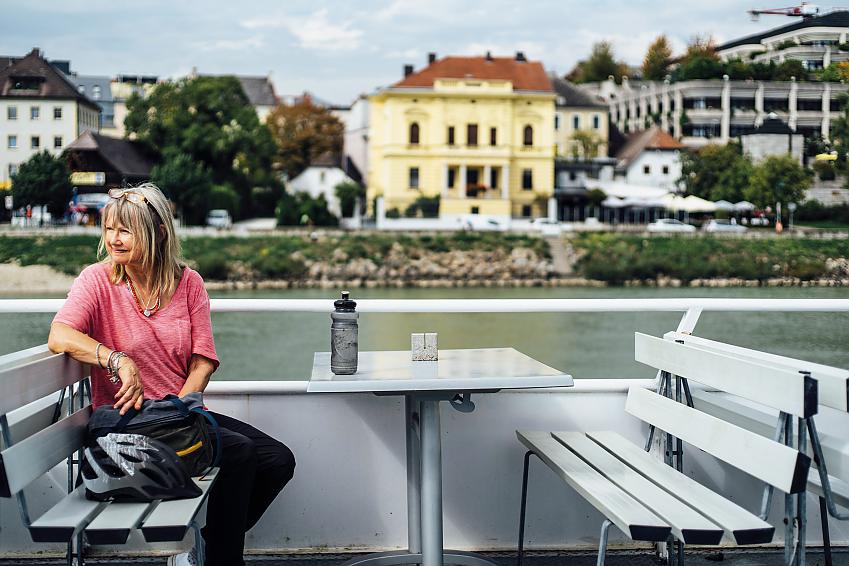 With regular ferries, it’s easy to switch between the Danube’s north and south banks

In the meantime, my mum was becoming quite the cyclist, covering 50km on our longest day. Her riding was becoming far smoother too, with fewer dismounts when tackling hills. Although sharing the road with traffic definitely didn’t appeal to her, she was taking it in her stride. And the ferry rides provided perfect punctuation to the day.

Towards the end of the route comes the Danube’s acclaimed highlight: the Wachau Valley. This means more traffic, both people and cars, though the riding itself was divine. We meandered through apple and grape orchards, stopped for walnuts and fresh apple juice, or to pluck plums off trees.

With 110km to cover in our last couple of days – a little outside our range – we settled on the notion of getting as far as we could in a relaxed way, then hopping on the train to Vienna to make up any distance. My sister and her daughter even surprised us by meeting us at the station, which helped make my mum’s sense of arrival, and accomplishment, feel especially complete.

I asked my mum for her impressions: “I loved the spontaneity, the unhurried pace and freedom. It was exhilarating to carry a week’s luggage in my panniers. On a personal note, it was a particular treat to share a cycle ride with my son – albeit a tame one by his standards – and I’d thoroughly recommend this experience as a way for families or friends to spend time together.”

By our final day, we were already planning a trip for the following summer, except this one would involve both camping and my son. Three generations riding all at once, sleeping under the stars! 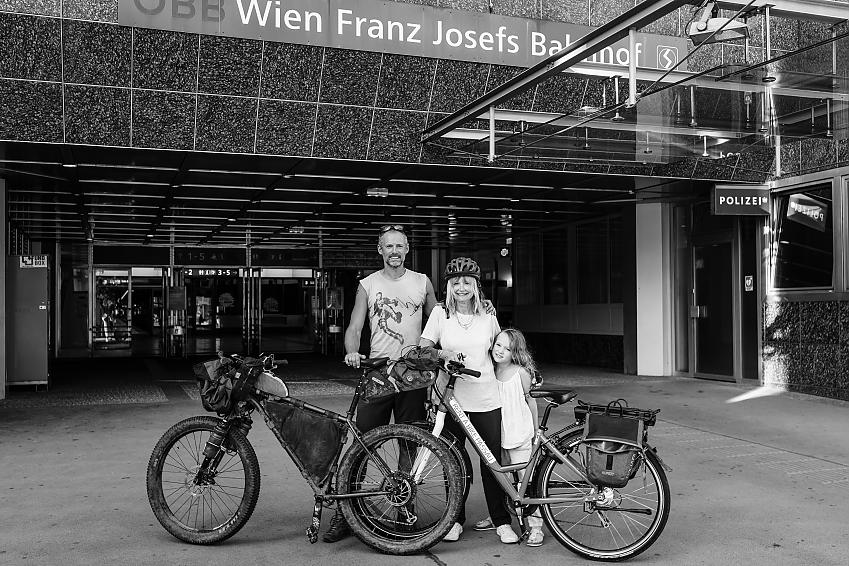 Cass, his mum, and her grand-daughter
Touring and Expedition     Women     E-bikes

Distance: We split our 340km ride into a week, hopping on a train at the end into Vienna.

Route: Along the Danube! It’s worth studying the route map, deciding which places you want to visit, and sticking to quieter bike paths.

Conditions: Although the route is very low in traffic, it’s not quite the car-free nirvana we were expecting. Some bike paths run next to main roads, and cities can be busy too, which my mum found challenging.

Accommodation: We used booking.com to find last minute deals, generally securing a place by midday. We travelled in early September, so this wasn’t an issue. Book in advance in July and August.

Maps & guides: The Donau Radweg Vol 2 was a useful addition to the maps we picked up in tourist offices.

Next time I would: Have gone with my mum for a couple more practice rides beforehand, in town as well as on bike paths.

Do it yourself - e-bike hire

There are a few bike rental agencies in Passau. We used ‘Rent A Bike Passau’.

The €25 a day stepthrough e-bikes have their battery on top of the rear rack, which makes them rear-heavy, especially with panniers.

These are provided for €4 a day but we brought our own, along with a helmet and gloves.

You can drop off the bike at specific locations in Vienna, or have it picked up for €35 at various points along the route.

From the Atlantic to the Black Sea View

Just how much can you carry by e-bike? View

Cycle Magazine, October/November 2019 View
Cycling UK continues to support the UK to cycle
This remains true during this difficult period with the ongoing threat of coronavirus Covid-19
Read our latest advice on cycling