The Danube may be on hold but Britain’s rivers are rewarding in their own way. Rob Ainsley looks at your current options

Our short-coursed island can’t match the great cycle paths of the Danube, Elbe, Loire, etc. I’m talking the small-scale, the curious, the charming. River rides have that in spates, with a clear narrative to the journey.

Birth, as a mountainside sprinkle amid thrilling uplands; excitable youth, hurtling through farms and villages; striving middle age, with main roads, towns and cities, industry and culture; serene retirement, winding across quiet plains to its mouth into some larger river or the sea… returning as rain to do it all again somewhere else.

And, in principle, at least, it’s downhill all the way. 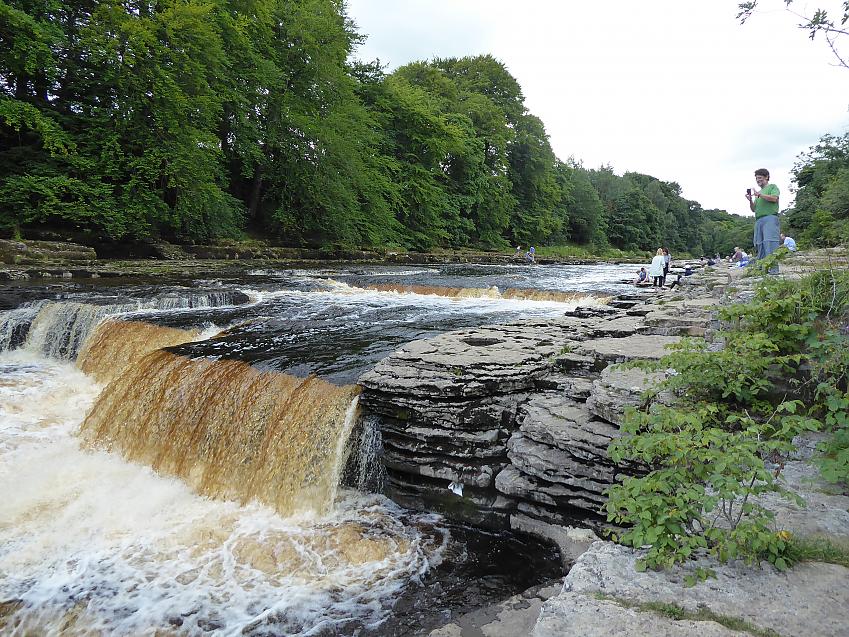 Aysgarth Falls in the Yorkshire Dales

Each river has its own character, in the settlements, scenery, and structures. The Wear’s stepping stones at Stanhope, or the Barle’s ancient stone bridge at Exmoor’s Tarr Steps. The hand ferry at Symonds Yat on the Wye. The Transporter Bridges over Middlesbrough’s Tees or Newport’s Usk.

Here’s my Top Ten Rivers for Cycling, based on my experiences around Britain. For more info, visit e2e.bike  – or see my talk for the 2021 Cycle Touring Festival.

Scar House Reservoir is a spectacular secret, and the dam-top views down the valley are as good as a drone’s

The car-free road from Middlesmoor up to the source at Scar House Reservoir is a spectacular secret, and the dam-top views down the valley are as good as a drone’s. Downstream is Pateley Bridge’s time-warp main street, Ripley’s ‘Italianate’ village, and quirky Knaresborough – castle, hermit’s cave, trompe-l’oeuil windows, surprise viaduct and all – stacked up the gorgeside like a vision of southern France.

Aimless farmland follows, but the mouth at Nun Monkton has more gems: a tiny summer peds-n-bikes ferry, and – by the pub on the green – Britain’s tallest maypole.

The Tay’s angler-friendly waters may be a tad more spectacular, but Speyside is a different kettle of fish – or rather, whisky. The remote source to Garva Bridge is a challenging sixmile track but after that it’s beautiful roads and trails all the way, though the likes of Kingussie, Aviemore and Grantown.

Distilleries, many visitable, are plentiful (‘Whisky Capital’ Dufftown, a minor detour, has six) and the signed Speyside trail takes you to many of them. The grand rail-trail bridge at the river’s mouth is on National Cycle Route 1. 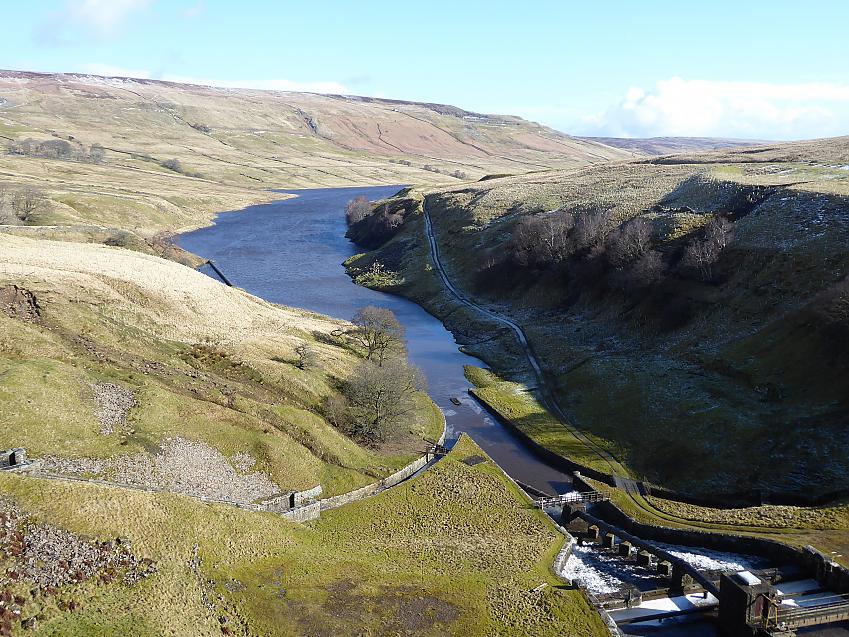 The view from the Scar House Reservoir dam

Perhaps the nearest to a Yorkshire Dales-style river south of the Severn-Trent line, the Exe starts in splendid Exmoor near Simonsbath, refuge for many a rained-on End-to-Ender, and carves it way south through robustly quaint villages.

The A396 (and the odd parallel lane) tracks it most of the way through lush Devonian scenery via Tiverton to Exeter. Easygoing riverside paths take you through the city’s café-bistro quays area and alongside the estuary on National Cycle Route 2 to Dawlish Warren’s precarious train station – or the ferry to Exmouth.

No sooner has it started from lofty, wondrous Malham Tarn than it disappears mysteriously into the ground… only to emerge two miles later out of a hillside.

After vibrant urban waterside and a country park, it’s mostly industrial to the muddy end near Boothferry Bridge. 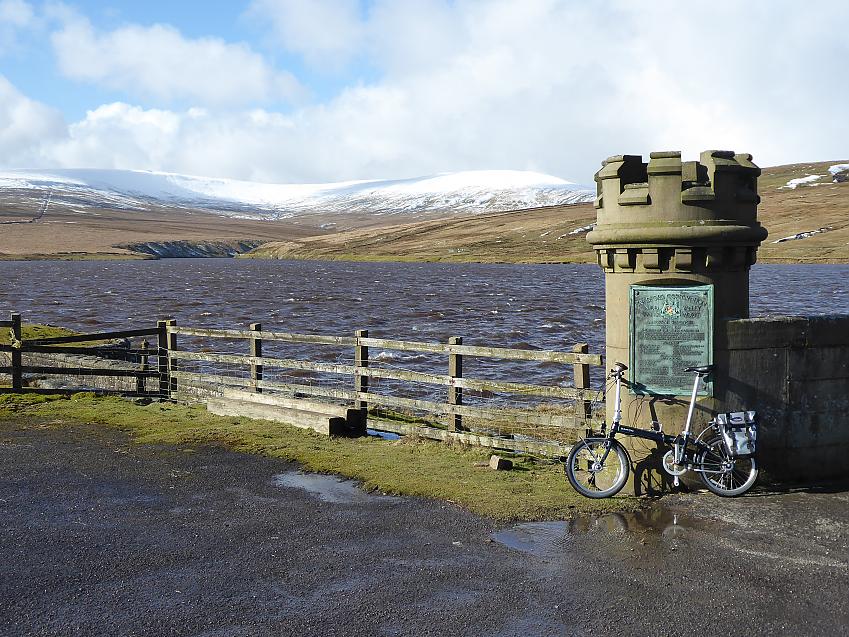 Not one but two Tynes: North and South, Korea-or Dakota-style. The North Tyne starts out of Kielder Water amid forestry gravel-biking ranges, while the South Tyne rises near Alston in the Pennines, familiar territory to C2Cers.

Either is followable on lonely lanes through rugged scenery to the confluence near café-and-cathedral Hexham. Follow what’s now ‘the Tyne’ along the Hadrian’s Wall route on roads and the odd rail-trail to Newcastle’s riverside path and its mighty parade of bridges.

Best of the west, with awesome views and tarmac all the way. The Lune rises near Kirkby Stephen and turns left at Tebay, shadowed by lovely lanes (and less lovely M6) at the foot of the Howgills.

Stop off at book-town Sedbergh, dawdle in Kirkby Lonsdale, and at Gressingham join the Way of the Roses the ‘wrong way’. Good riverside paths take you into, through, and out of Lancaster, and ultimately to Glasson – opposite Sunderland Point, a tidal village that’s cut off every high water. 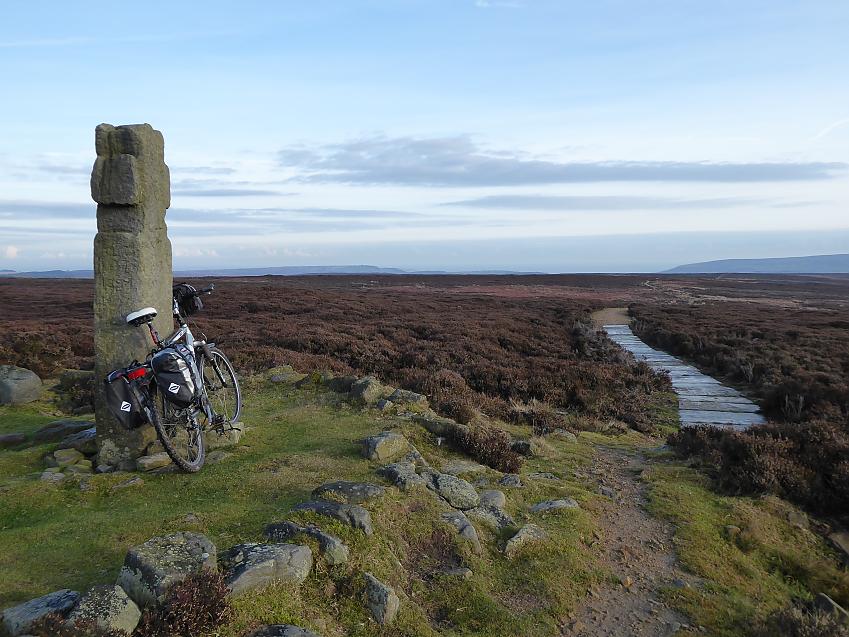 Lilla Cross, at the source of the River Derwent

From Kirkby Stephen it’s a cobweb-blowing climb to the ridge, whose waters gather to make Britain’s fastest (and fastest-to-spate) river. The recently-resurfaced Swale Trail, between Keld and Reeth, is an easy MTB/gravel/tourer ride through dramatic, almost fjordlike dalescapes.

Reeth’s sprawling green is picnic-perfect, and from here it’s an easy run to Richmond, with its fine (but carchoked) square, riverside ruined castle, and ruined Easby Abbey. Then it’s quiet, flat agricultural stuff, requiring map ingenuity to link bridleways official and unofficial. But that first half is something special.

Approach from Ribblehead’s viaduct, Cam High Road and Fleet Moss, 589m up; a gravel bike or tourer is fine. These are among Britain’s most awesome landscapes, and the Upper Wharfe is the Dales par excellence.

Breeze through honeypot villages such as Kettlewell, Grassington and Burnsall, and admire the Strid’s violent rapids – with caution as it’s perilously slippery. Try the stepping stones at Bolton Abbey (if the bike ban has been lifted), perhaps nip up Ilkley Moor baht ’at, and see Tadcaster’s breweries and viaduct to nowhere, before the low-key finish at Cawood. 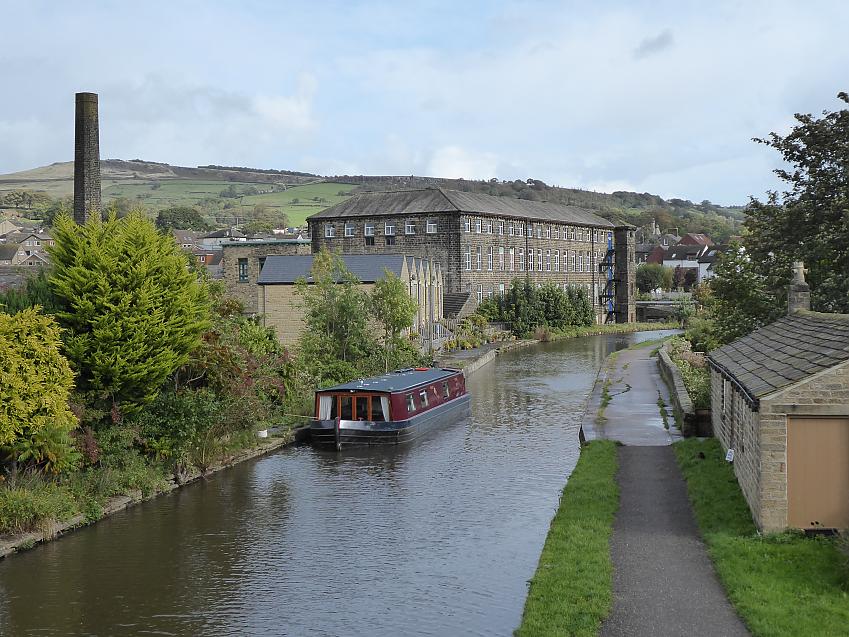 Unlike the Thames or Severn (whose source is only a few hundred metres away), the Wye is followable on road for much of its attractive length. The A44 is busy to Llangurig, but the quiet back lanes from there to Rhayader are candidates for Britain’s finest riverside rides; on through Builth Wells and Hay isn’t bad either.

After Hereford and Ross it turns more gorgey, and gorgeous, through Symonds Yat (via cycle paths, a tiny DIY ferry, and the new Tintern-Chepstow railtrail through Tidenham Tunnel). Finish at Chepstow’s old bridge on the English-Welsh border.

Really one river, of amazing variety: landscapes, people, history aplenty, villages, towns, cities. ‘Uredale’ (actually Wensleydale, as in the cheese) starts near Hawes, and Aysgarth Falls is Yorkshire’s answer to Iguazu Falls (Yorkshire has an answer for everything).

The Ure is renamed the Ouse just before York, flowing grandly through (and often flooding) the historic centre, with good waterside bike paths.

After quiet, low-lying farmland, the Trans Pennine Trail joins the river as it heads east to the sea from Selby. 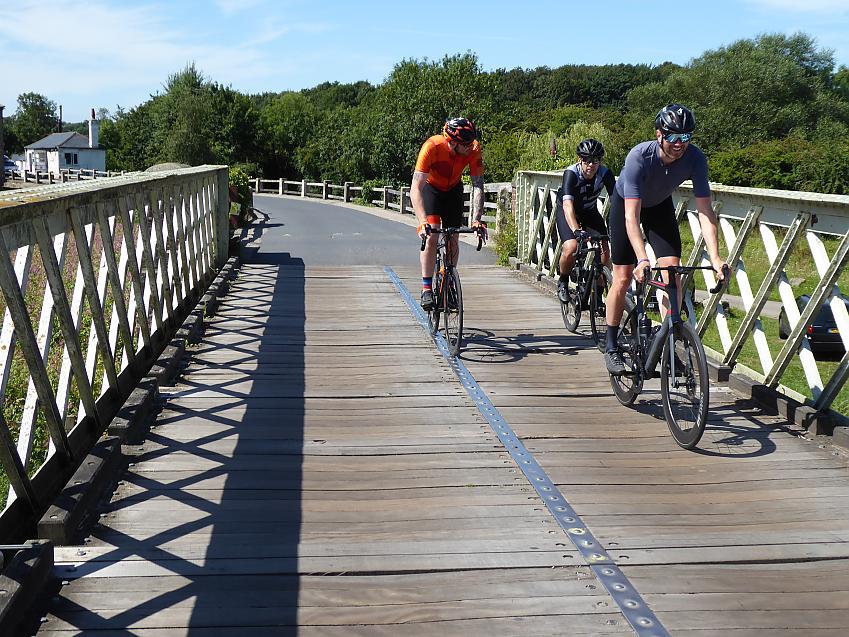 Riding over Aldwark Bridge on the Swale Trail

Do it yourself: Navigating downstream

For route planning Ordnance Survey maps are best, especially, in conjunction with Wikipedia, for locating the source (and Cycling UK members receive a 20% discount off the annual 12-month OS Maps premium subscription and paper maps).

Open Street Map is handy for obscure paths and cut-throughs (and, on the ‘cycling’ layer, signed bike routes), while Google Street View can suggest scenic choices. With luck, a train and a bridleway will get you close to the start. After that, the route is pot luck: expect potentially muddy, indistinct paths, circuitous busy roads with no views – and glorious waterside paths and lanes, plus village and town riverfronts that make it all worthwhile.