Cycling UK member and one of our 100 Women in Cycling Robyn Jankel cycled 1,300km on her trusty Dutch-style bike. Find out what inspired the adventure and why she’s campaigning for better cycling provision in York

Robyn Jankel is a guesthouse owner and cycling campaigner based in York. She’s also a Cycling UK member and one of this year’s 100 Women in Cycling. Back in 2020 – inspired by a rain-drenched ride during Storm Jorge – she spent five days cycling from Southport to Doncaster along the Trans Pennine Trail.

Her chosen transport wasn’t a mountain bike or a well-laden tourer. Robyn completed the ride on her trusty Dutch-style bike, a WorkCycles Oma. She describes the bike as “the absolute Rolls-Royce of transport bikes: built to last, eminently reliable, sturdy and elegant”.

She says she cycles mostly for everyday transport, wears regular clothes and only uses a Dutch bike "I don’t really consider myself ‘a cyclist’ – I feel like I don’t fit the traditional mould".

Robyn has long fancied the idea of doing a long-distance ride, but had been put off by the way other people talked about them. The focus always seemed to be how far and fast they’d gone, how quickly they’d completed it, how many days they went without stopping.

“I couldn’t compete,” she says. “For a long time it felt like there was no point in even trying to do an adventure if I weren’t competing or trying to outdo someone else. Then one day I had something of a revelation, and I thought: isn’t the whole point just doing it in the first place?”

She decided to go for it – tackling the ride on her faithful old Dutch bike and taking her time along the way to enjoy herself. “I spent five days cycling the Trans-Pennine trail, and in that time I made it from Southport on the west coast, over the Pennines, and to Doncaster.

“Unfortunately, I managed to give myself Achilles tendonitis, probably because I hadn’t been doing any warm-down exercises. When I reached Doncaster, my ankle was in crippling pain, and I could barely put any pressure on the pedal at all. I had to take the train home to York. I wasn’t able to reach the east coast and complete the trip.

“I felt bad about it at first but then I told myself that I’d done the hardest bit, and I could always go back and finish it another time.”

She wrote about her adventure and says she “received a lot of positive feedback, especially from women who held similar fears to me, and who encouraged me to take it further and do an even longer distance”. 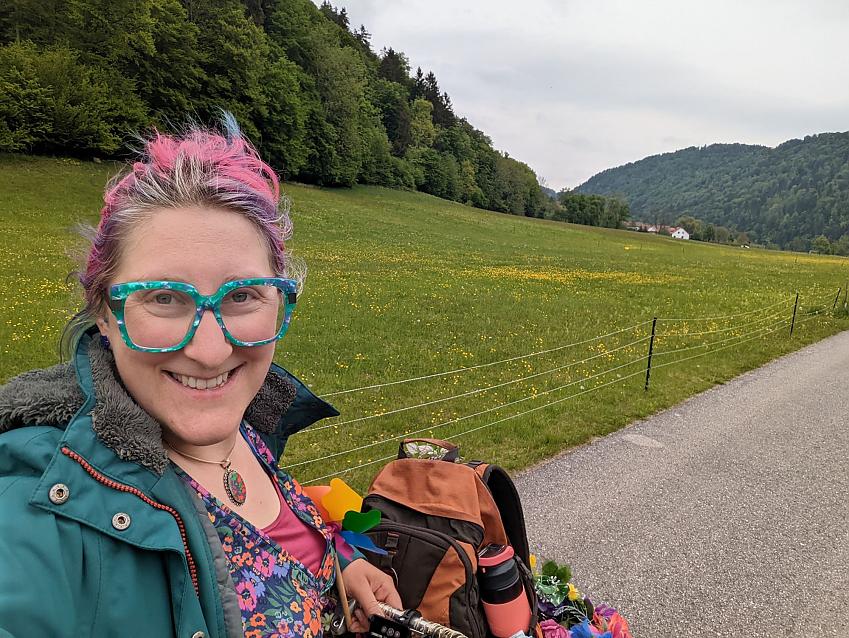 Robyn and ‘Grazel’ after climbing a hill in Germany

The obvious next step was to cycle along Europe’s second-longest river – the Danube. She would once again be accompanied by her Dutch bike and would also ride in ‘normal’ clothing. “I wore dresses and my favourite iridescent trainers, just like I would when cycling at home. No Lycra in sight.”

Oma means ‘grandma’ in Dutch. So Robyn named the bike after her maternal grandmother, whose nickname was Grazel, a combination of her name, Hazel, and grandma.

She says of her decision to ride the 1,300km from the Danube’s source, a small town called Donaueschingen in south-west Germany, to Budapest –about half the total length of the river – on Grazel: “She’s my only bike and it just didn’t occur to me to take another one. I find her supremely comfortable, and I wasn’t about to buy a new bike just for that trip!”

Keeping in mind the weight of the bike, Robyn deliberately chose a fairly flat route. “She is ridiculously heavy – 30-odd kilos without the front basket or any luggage!”

There was one potential problem, though. “My biggest risk was that I was incapable of doing any maintenance on her, even changing a tyre, because with hub gears and brakes, she requires specialist tools to take the wheel off,” Robyn explains.

“I got new Schwalbe Marathon Plus tyres just before I left, had a full service, and then crossed my fingers and hoped for the best.”

The gamble paid off. “Amazingly, she made it through, even over some fairly rough terrain in places, although I did take her for a once-over in Vienna halfway through.”

She says she learnt her lesson from the Trans-Pennine ride: “I became absolutely religious about warming down on my Danube trip and spent 20 minutes stretching every evening!”

It took Robyn two months to do the ride, but that includes “several days delay at the beginning because of hurricanes in Germany and a week in Budapest at the end.

“I wanted to take as much time as I needed so that I could cycle at my own pace, which was on average 40km per day, and have as many rest days as I wanted.

“I wasn’t in a rush, so I didn’t feel any pressure, except for when I booked an opera ticket in Vienna and knew that I had to reach the city by that date – and I arrived about three hours before the curtain went up!”

Getting to know you

Taking the ride at a slower pace meant Robyn got to know the areas she was cycling through. “I stopped in a series of random towns and hamlets along the way which meant I got to really appreciate how the surroundings changed and meet interesting people.

“I loved noticing how the Danube started from not much more than a stream, and became this wide, powerful river. It was humbling and felt very special to witness.”

She recounts one standout moment that took place in Mosonmagyaróvár in Hungary. “I was staying for a couple of nights to have a break. The day before I was due to leave, the host of my accommodation told me that the ‘whole town’ would go on a cycle ride the next day and asked if I wanted to join them. I of course decided to stay an extra day.

“Around 400 people joined in, and we went on a lovely slow cycle ride all around the town. Her husband pointed out all the sights to me, and I was photographed for the local paper because they loved the flowers on my bicycle!”

It wasn’t all plain sailing, though, and Robyn talks about some of the more challenging aspects of the ride. “The worst bits were the hills, which were thankfully infrequent, but fairly prevalent during the first week, which went through the Black Forest, and really put me and Grazel through our paces. I definitely regretted the decision to take such a mammoth bike when I saw the sign for a gradient of 17%.”

Solo cycling presents its own challenges and Robyn says she found the loneliness hard at times. All that time alone to think was emotionally draining, and Robyn missed the moral support, shared decision-making and ability to talk things over when with other people.

“As a brazen extrovert I found that pretty tough, much harder than I had anticipated, and I seized every opportunity I was given to connect with people I met on the road. But it did mean that I felt even prouder of myself when I completed it!”

These days, Robyn is back in York, where she runs The Purple Door guesthouse and is chair of the York Cycle Campaign. She does own a car but says she uses it only rarely. “I often don’t drive for months at a time, but I cycle most days for transport.”

She describes herself as an active campaigner who is “wholeheartedly behind York Cycle Campaign’s mission to make cycling in York safe, convenient, and accessible for everyone”.

Robyn started cycling for transport in her late 20s while living in London, when a now ex-partner introduced her to the idea, “which I literally hadn’t even considered before”. She says she started off using the Santander hire cycles, but quickly progressed to her own bike: “the lovely Grazel, who has been with me ever since”.

She thinks this country would be exponentially improved all around if more people cycled, and believes York has great potential for cycling; it is “small, flat, compact, and has comparatively good weather for the UK, so it really has all the ingredients to be a fantastic place for cycling”. However, it is being held back by ageing infrastructure and a council that’s dragging its feet.

The city has previously been described as the UK’s leading cycling city, “but this was decades ago, and the council are very much resting on their historical laurels.

“We have out-of-date infrastructure, which is worn away, unsafe and doesn’t meet contemporary standards; upgrades tend to be fairly bitty rather than wide-reaching and ambitious. We haven’t had much investment in recent years and it’s incredibly frustrating.” 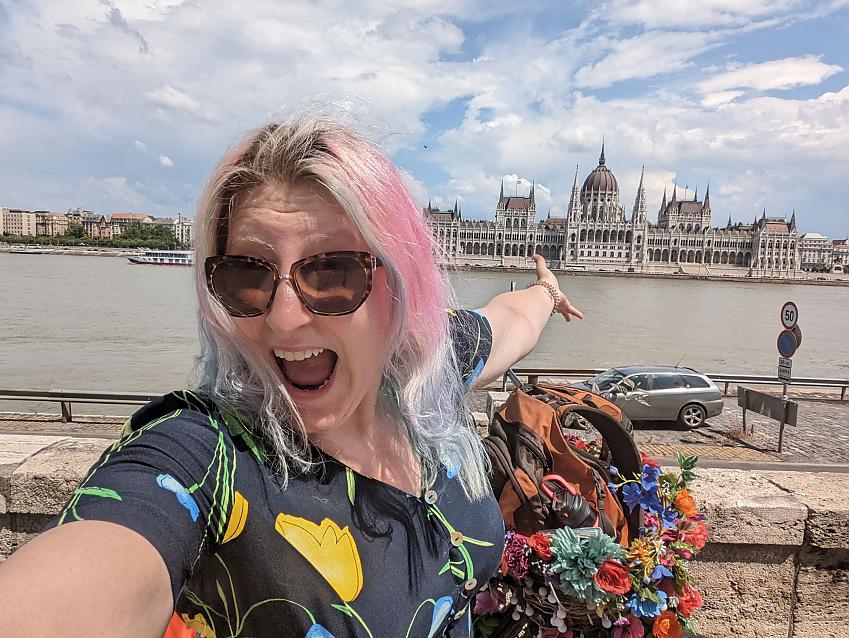 Robyn celebrates reaching Budapest, the end of her epic adventure along the Danube

York is a stop-off point for the Way of the Roses coast-to-coast cycle ride, it’s also on a spur of the Trans-Pennine Trail. “I hope that anyone planning on doing one of these trips in the future might consider staying with me at the Purple Door York (I need to specify York because there is also a Purple Door in Leeds which is a strip club – we offer rather different services!),” Robyn says.

As well as comfy beds and a hearty breakfast, there’s space to store cycles and Robyn also has two Elephant bikes to lend to guests. Robyn says: “I love the concept of Elephant bikes. They take Royal Mail bicycles, teach ex-young-offenders to refurbish them, and send another one to Malawi for every one that’s purchased.

Robyn’s campaigning fed naturally into becoming a Cycling UK member and she says she loves how the organisation stands up for everyone who wants to ride, on whatever cycle they happen to use.

She believes that infrastructure and attitudes towards cyclists “are frankly abhorrent in this country” and compares them to cities such as Copenhagen, Amsterdam and Utrecht, where she “was blown away by the difference in investment, and interaction between cyclists and motorists”.

“The more I cycled and campaigned, the more I started to realise that it truly is something of a panacea for a huge number of our social issues, from respiratory issues to carbon footprint, and social isolation to mental health. Cycling UK does fantastic work in progressing this hugely worthwhile cause.”

So what about the future? I ask Robyn if she has any plans for more long-distance challenges.

“I don’t have any plans for another long trip at the moment, but I am currently writing up my experiences of cycling the Danube and hope to publish a book out of it.

“I would like to take Grazel somewhere exotic and exciting, but the problem is that it needs to be relatively flat; my friend suggested I tackle Mont Ventoux but I think he’s out of his mind. Another friend reckons I should do the Italian lakes, but I don’t think he appreciates quite how heavy my bike is.

“If anyone has any suggestions for long, interesting, but above all flat routes, then I would be delighted to hear them. We’re getting itchy feet (and wheels)!”

Allyship: What men can do to support women in cycling View