Lack of a bike and cycling skills are surmountable barriers
By Christina Bengston
Wednesday, 18 August 2021

Sarah Javaid, winner of the Volunteer of the Year at the 2020 Women’s Cycling Awards, spoke to Christina Bengston about Cycle Sisters, her organisation for Muslim women

"Muslim women, along with black, Asian and minority ethnic women, are often considered to be ‘hard to reach’ groups when it comes to cycling, but they’re really not hard to reach,” Sarah explains. “It’s just about having the right approach and the right people who are leading that initiative.”

Sarah founded the hugely successful Cycling UK-affiliated group Cycle Sisters in 2016 in Walthamstow. There are now groups in Redbridge and Chingford. “We’re planning a group in Hackney, which will hopefully start up sometime this year,” she says. “The vision is to have groups across the country and have a nationwide network of Muslim female cyclists.”

After Sarah got back into cycling as an adult, she identified a need for a group that worked for Muslim women.

“It was difficult to get myself cycling again,” she says. “I found it overwhelming – the choices about what bike to get, where to go. I felt like I did it the hard way. That’s why I started Cycle Sisters, so I could support other women like me who were not that confident, and who couldn’t find another group where they could feel comfortable or identify with.

“There can be misconceptions when people think about Muslim women and the barriers they face when it comes to cycling,” she says. “People often think, ‘Well, it’s their culture, they’re not allowed to cycle’, or ‘How would they cycle wearing those kinds of clothes?’”

In fact, Sarah explains, it’s often logistical issues around not owning a bike or lacking the skills to cycle, alongside needing a space where they won’t have to compromise their beliefs. “If people know that their needs are taken care of, they’re more likely to come and give it a go.”

Cycle Sisters has created an environment that works for Muslim women, where they feel comfortable being themselves without explanation. “We fill our rides all year round, throughout the winter,” says Sarah. “Our members just want the opportunity to come out and ride.” 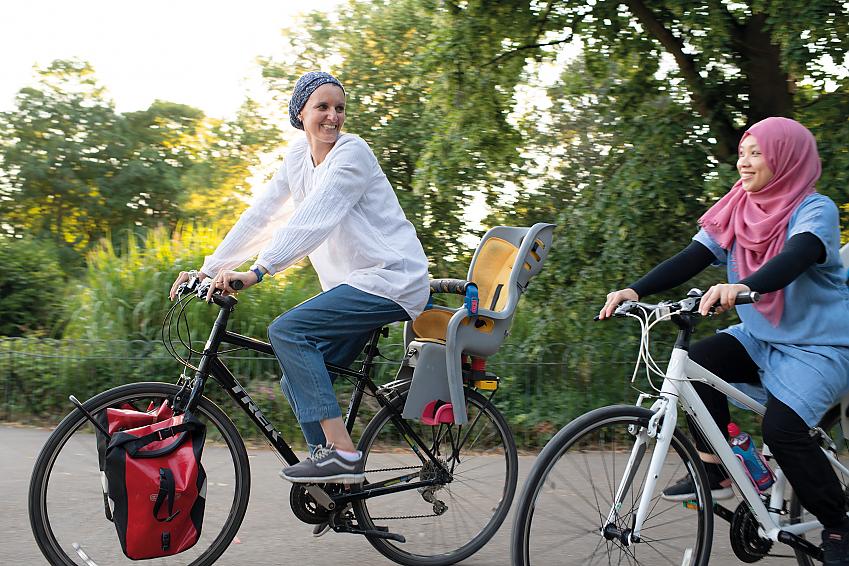 The impact of the groups goes much further than just the women on the rides. “By getting the women in the family cycling, they often then get their kids and husbands cycling, and so you start seeing whole families out on their bikes.”

When I ask what advice she could give to other groups, she is clear. “It’s about identifying people from within the communities that you’re trying to reach.

“All of our volunteer ride leaders are members of the groups who have come up and developed those skills through coming on the rides. They are the ones who are the role models, who attract other women to come into the rides, and spread the word among their friends and networks.”

One of the objectives of Cycle Sisters is for Muslim women to be better represented “so that it’s not unusual to see a Muslim woman on a bike,” says Sarah. “Not just out on a bike but, in terms of media and advertising, having much more representation.”

After benefiting from the support from Cycling UK and local councils Waltham Forest and Redbridge, Sarah is “keen to work with other organisations and cycling bodies to help make things more diverse and inclusive, because that in turn will have an impact on other women thinking about cycling, and thinking it can be for them.

“A lot of the women who come on the rides say, ‘I saw another women who looked like me – either in the photos or on social media or out on the streets – and that is what made me think, if she can do it, I can do it.’”

The Women’s Cycling Awards celebrate the exceptional achievements of women in cycling over the previous year. The awards were scheduled to be announced at the London Bike Show on 27 March but it was postponed. The ceremony, hosted by Anna Glowinski, took place online.