From the Atlantic to the Black Sea

Mike Davies at the Rhine Falls in Germany
By Anonymous
Wednesday, 9 August 2017

From the Atlantic to the Black Sea

The EuroVelo, or the European cycle route network, is a system of long-distance routes all over Europe. At 71 years young, Mike Davies cycled the EuroVelo 6 - a route that connects the Atlantic Ocean and the Black Sea – to rack up a total distance of almost 2,500 miles.

Before taking on this journey Mike had never been away from home for longer than two weeks. He had no touring bike, he had no mobile phone, and he was "not good at roadside repairs". He was also 71 years old.

"The people who knew me best were sceptical – generally speaking I’m a nervous traveller," Mike said. It was only after he read an article in April this year about the routes across Europe that the idea of cycling one of them took hold. "The idea wouldn’t go away. I just wondered if I could."

After only three weeks’ preparation, that initial idea turned into a 47-day, long-distance cycle ride cutting through the middle of Europe. The EuroVelo 6 takes in France, Switzerland, Germany, Austria, Slovakia, Hungary, Croatia, Serbia and Romania.

The reason behind Mike’s choosing this route was very simple: "It was advertised as being relatively flat because it follows the rivers – the Loire, the Rhine and finally the Danube to the Black Sea," he said. The EuroVelo 6 is very popular for cycle tourism – there are plenty of people who cycle this route, perhaps due to the castles, vineyards and châteaus available to visit along the way. 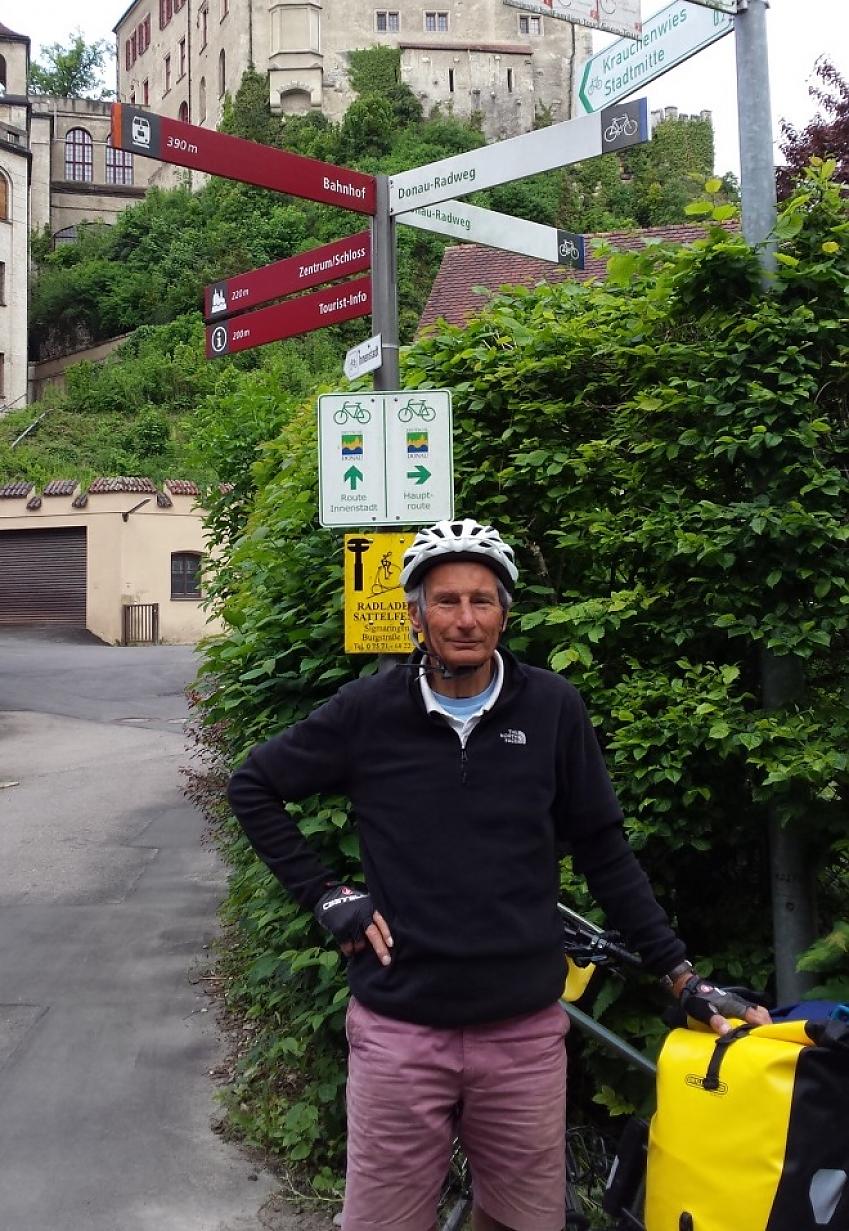 Above: Signposts in Germany

Dipping my hands into the Black Sea after travelling miles to be there was an achievement.

For Mike, though, tourism is best done with someone to talk to. This trip was about doing something different – it was all about the challenge of reaching the Black Sea under his own steam. He especially enjoyed bumping into others on the way. "People are very informal. We would have a meal together, a beer together… I remember the people, the variety of people."

Mike’s focus on staying on the road extended to rest days. "I planned to have rest days, but unfortunately the first one was on a Sunday in France and everything was closed. It turned out to be the only depressing day. After that I decided against any more rest days." 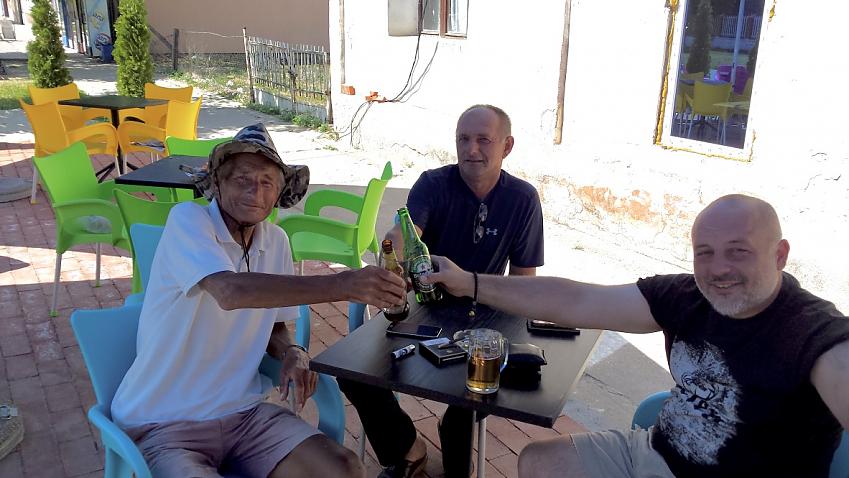 Above: Toasting the gift of a hat in Serbia

If you are planning a long distance ride, Mike advises two things before leaving. First: "Carry out a proper test ride with your bike fully loaded!" And second, always buy the guide book. Mike had bought the first of two guide books to the Danube and it was only on approaching Hungary that he realised how important the second volume would be. Fortunately, his wife Heather managed to track down an English copy in a bookshop in Budapest.

Then, on the ride itself, Mike says it's important to choose the path of least resistance. "Do it the way it suits you."

In the end, was it an adventure? "It was an adventure. Just not particularly dramatic. But dipping my hands into the Black Sea after travelling miles to be there was an achievement."

Mike is enjoying being at home after his time abroad but he is planning to go back to his favourite stretches on the EuroVelo 6 to cycle them again with Heather.

If you feel inspired by Mike’s story, but are looking for something closer to home check out our County Guides for advice on rides around the UK, and don’t forget to tell us about your experiences!

From the Atlantic to the Black Sea The EuroVelo, Mike Davies

Mike Good fo you. Thanks for sharing your experience with us. All the best for further tours.

my husband and I have just started sewing the seed for doing the Eurovelo 6, however, we can’t quite work out the logistics of getting bikes to the start. We live in Leeds. Did you fly out? Coming home we would use the ferry. Hope you can help, thanks