Climbing up to the Niederwalddenkmal monument
By Sophie Gordon
Friday, 2 April 2021

The Rhine is one of the longest rivers in Europe, flowing 760 miles from Switzerland to the sea. Sophie Gordon followed the cycle route alongside in 2019

Our holiday had been put on hold. It wasn’t the coronavirus pandemic; this was before. My friend and touring companion, Jethro, fractured his tibia 10 days before we were due to depart in 2018.

A year later we were at Gatwick at 11pm, stuffing frames and wheels into bike bags. Despite my insistence that we didn’t need to fly, the logistics were complex and the train to Basel was three times as expensive… Fortunately, the bikes arrived unscathed. After the faff of putting them back together, Jethro announced: “Well, that’s the difficult bit done. Now we just have to cycle 900 miles!”

Starting on a high

We were riding the River Rhine EuroVelo route, one of 16 colourful lines on a map promising enticing adventures through multiple European countries. The Rhine emerges from a mountain pass near Andermatt in Switzerland, loops its way through Alpine valleys to join Lake Constance, then winds through France, Germany and the Netherlands, reaching the sea at the Hook of Holland.

The first few days through Switzerland were glorious. After climbing from Andermatt up to the source of the Rhine at Oberalp Pass, we plummeted down nerve-wracking zigzags, passed chocolate-box Alpine villages, and wound our way through lush green vineyards framed by dramatic peaks.

Every time we crossed the river we crossed the border, barely noticing as we hopped between Switzerland and Germany. The blackened remains of bridges destroyed during WWII reminded us that this was a luxury we shouldn’t take for granted. 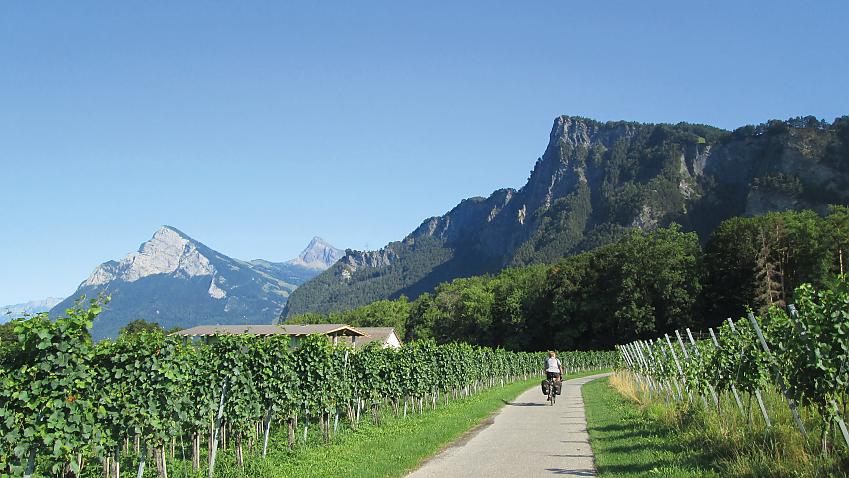 My favourite moments were the early mornings: setting off in hazy blue, with the sun breaking through and dissolving the mist in the distance. The miles disappeared beneath our wheels on the smooth, traffic-free cycleways.

At the other end of the day there was the blissful coolness of jumping into the water whenever we could after a long day of riding. This was interrupted once by a thunderstorm brewing as we wild camped near Lake Constance, making us run back to the tents and hope the willow tree sheltering us wouldn’t be struck by lightning.

Within a few days we had looped around from Andermatt back to Basel. As it was such a lovely evening, we decided to carry on for a couple more hours into France. We coasted along, enjoying the golden early evening light reflected on the canal. That night we wild camped on the edge of the forest, illuminated by a full moon.

Crossing into France felt significant: through Switzerland, Germany and a brief spell in Austria, the signs were always in German. Seeing the language change gave a much stronger sense of being in a different country. 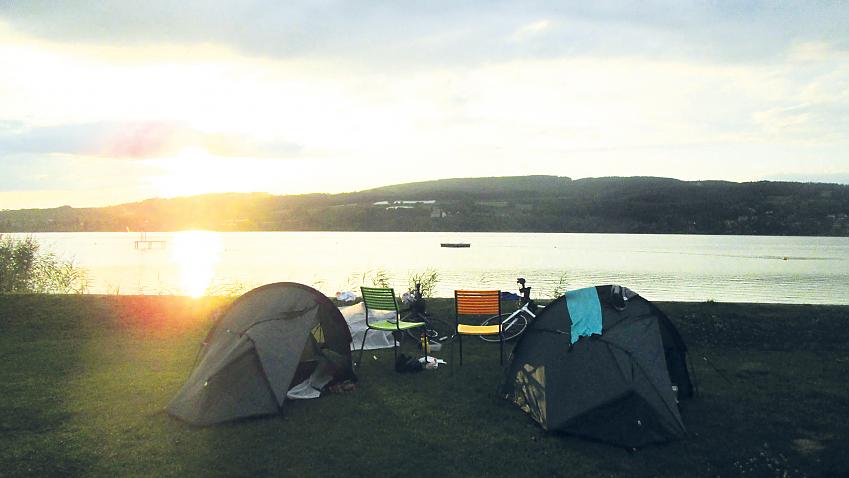 After a few days in France we were back in Germany. I was struck by the prevalence of e-bikes. One gentleman, after examining our loaded bikes when we explained where we were going, looked at us incredulously and said: “But you have no motor!”

It was fantastic to see how the combination of e-bikes and extensive traffic-free cycle networks keeps people cycling. I was particularly impressed by what we termed the ‘silver pelotons’ – small groups in their 70s and 80s – meandering around town together. Imagine what that does for the health of a nation!

The Rhine countryside is mostly flat. The exception is in central Germany, where medieval castles perch on rounded hills like Drakensfel (‘dragon’s hill’). One hill is watched over by the colossal Niederwalddenkmal monument. The steep climb up to it was rewarded with a fantastic view back down the shimmering river.

After the Rhine Gorge, tourist ferries were replaced by freight barges chugging their way through an increasingly industrialised landscape. Heading towards the sprawling city of Mannheim, home to the biggest single-site chemical plant in the world, the view became steel and concrete as far as the eye could see, a maze of pipes and tubes and funnels belching out steam. It was like a scene from a sci-fi film.

The Rhine route is well travelled and we found we kept bumping into the same characters along the way. There was Bern, a quiet Swiss chap who glumly announced that all his stuff was rain soaked the second time we saw him.

There was the bloke on a trike who looked so leisurely but always seemed to reach the campsite before us. And the couple from Stockport on a semi-recumbent tandem, full of stories from seven years of touring on it. 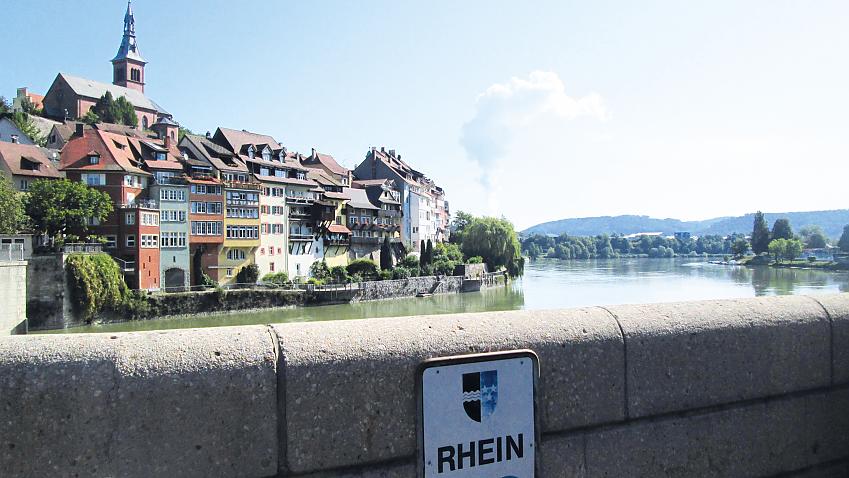 There were also those little surprises that make a trip memorable. We caught a volleyball world championship game in Lichtenstein; discovered a hidden sculpture garden made from discarded objects; and explored the fascinating fortified town of Neuf-Brisach with its star-shaped outer wall.

After two weeks of cycling, 1,400km, and five countries, we emerged where the Rhine meets the North Sea at the Hook of Holland. I had imagined an industrial port so it was a surprise to find beach cafés and bars and hundreds of people on sun loungers on the beach.

Before we joined them, we decided to finish the ride properly by cycling out to the end of the mile-long pier, until we were surrounded by sea and could ride no further. The next day we rolled onto the ferry back to Harwich – a breeze compared to the hassle of flying.

By train: Eurostar from London to Paris, high-speed train to Basel or Zurich. We found Mark Smith’s website helpful, too.

By plane: Fly to Basel or Zurich. From Basel, a small train then takes you up through the mountains to Andermatt.

The easiest way back is by ferry, either Hook of Holland to Harwich or Rotterdam to Hull.

Route: Curving along the Swiss-German border from Andermatt to Basel via Lake Constance, then north-west through France, Germany and the Netherlands to the Hook of Holland.

Conditions: Mainly dry and sunny, a couple of wet days. Excellent traffic-free cycle routes for much of the way. Mostly flat.

Accommodation: Camping. We wanted to be flexible so didn’t pre-book campsites.

I’m glad I had… Some camping meals for the first few days – Switzerland is very expensive – and a friend who enjoys doing all the planning.

Next time I would… Go over some French and German. Everyone speaks English but I’d like to be able to say a few basics.