Now in its ninth year, the Big Bike Revival aims to give bikes a new life back on the road and get people out on cycles. Cycling UK’s digital officer Rebecca Armstrong looks at the history and successes of the project

When it launched back in 2014, no one could have predicted just how successful Cycling UK’s Big Bike Revival (BBR) would be. The project aims to help anyone and everyone to start or return to cycling.

Funded by the Department for Transport (DfT) and supported by local authorities, the scheme was piloted in Yorkshire before being rolled out across England. A series of free pop-up bike-fixing services for cycles in need of minor repairs was organised, the sessions run by trained Dr Bike mechanics.

The project has five objectives: to encourage people who don’t yet cycle to take it up; to encourage people to cycle more often; to increase the number of short journeys taken by bike; to improve perceptions of safety; and to improve people’s cycling confidence. It does this by facilitating a programme of free events and services across the country delivered by local organisations.

There are potentially millions of unused bikes languishing in sheds and garages across the UK. A YouGov study commissioned by Bike Club, a kids’ bike monthly subscription service, found that 34% of British adults have at least one adult bicycle that is unused, while 15% have at least one child’s bike that’s no longer used.

Many of these are perfectly serviceable, with just a puncture repair or brake adjustment between continuing to gather dust and being roadworthy. 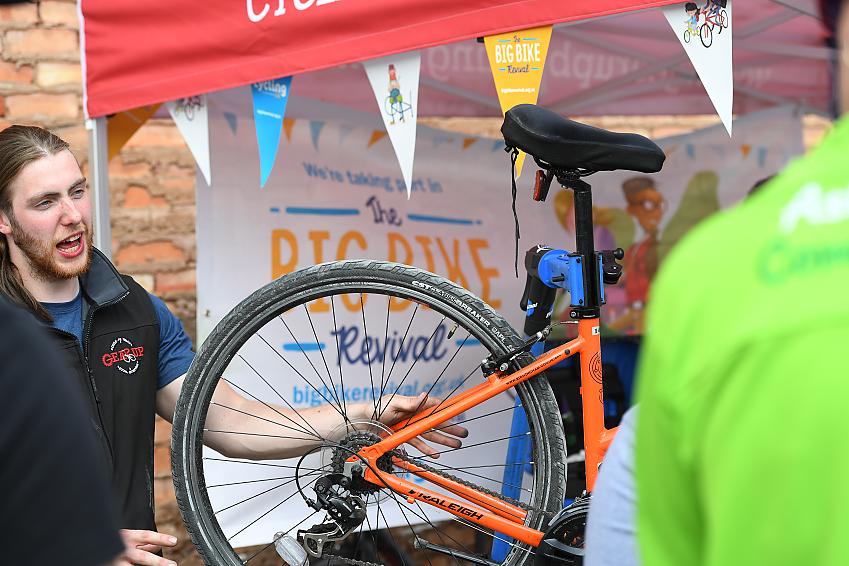 At the same time, lack of confidence on a bike and lack of mechanical skills are among the most common reasons given for not cycling. A Cycling UK-commissioned survey by YouGov, for example, found that 47% of people in the UK are not confident in carrying out basic bike repairs such as fixing a puncture. However, 61% wanted to learn rather than pay a professional.

Lack of confidence particularly affects women. A survey commissioned by Laka, a specialist cycle insurance company, found that 42% of women across the UK do not feel confident riding a bike on roads.

Add to this the issue that ways into cycling and maintenance are often inaccessible for many – male dominated, too expensive or simply happening at the wrong times – and the need for Big Bike Revival becomes clear.

BBR works with local organisations across the country to deliver projects in the community, with each tailored to the specific needs of the people. It’s about getting the right schemes to the people who need them – whether that’s repairs, skills sessions, maintenance training, confidence building or led rides.

The figures speak to the success of this approach. Since its 2014 launch, the programme has helped 340,000 people. Almost half of these were women, while a quarter identify as an ethnic minority. Many of them (45%) were previously not regular cyclists.

In 2019 more than 1,000 extra cycle journeys a week were made in the UK, while in England alone almost 8,000 bikes were fixed – all thanks to BBR. Almost 21,000 of those who took part said they were now cycling more than before.

Ricky Dragon, a laboratory assistant at Heartlands Hospital in Birmingham, is among those who have been helped. “I was very grateful for the repair scheme because sometimes because of my shifts I could not make it to a shop to purchase spares,” he said. “To have the Big Bike Revival come to us was greatly appreciated and at no cost.

“It made my day to get a repair done and to save some money was brilliant. The staff took my tyre and returned it to me repaired. The mechanic was very kind and helpful.”

Ricky’s experience reflects a wider change in BBR in 2020. With many planned BBR events unable to go ahead due to lockdown restrictions, the programme turned its attention to keeping key workers like Ricky moving.

Since we got these bikes, they have not stopped being used

Big Bike Revival for Key Workers provided grants of up to £3,000 to delivery centres, enabling them to help key workers continue cycling for work and daily exercise by providing free repairs, bicycle loans and equipment. The project helped more than 7,800 key workers to cycle to work, easing pressure on public transport during the pandemic.

The scheme also provided bikes for Angelique Cox, an NHS worker from Wivenhoe, Colchester, and her 11-year-old son. Route 51, a community-led social enterprise that fixes bikes in Colchester, sourced the bikes, after appealing for local people to donate unwanted bikes to be repaired and given to NHS and other key workers.

Angelique, who works with children and young people with eating disorders, said “It has been absolutely brilliant. I can combine going out on short trips for things that need to be done with going out with my son and now my daughter has started going out with friends cycling as well. Since we got these bikes, they have not stopped being used.”

BBR has come a long way since its 2014 beginnings and is constantly evolving. In 2019 the emphasis was on helping refugees and asylum seekers to ride. With support from the programme, organisations from Portsmouth to Cumbria were able to provide led rides aimed specifically at this particularly vulnerable group.

That year also saw projects aimed at getting more women riding. Anne Glass, chief instructor and ride leader at Drumchapel Cycle Hub in Glasgow, organised a series of mid-morning Wednesday rides for women who want to get out and about while their kids are at school. 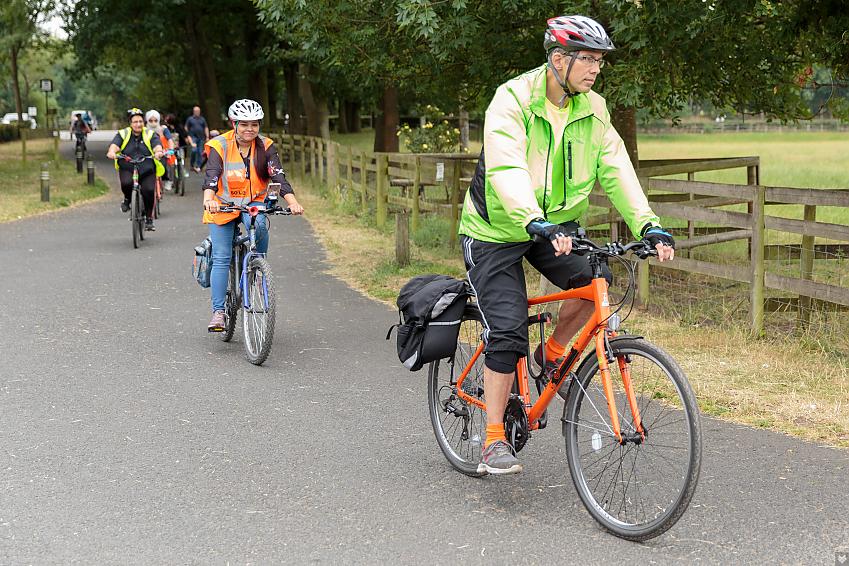 Sheryl Scott, a stay-at-home mum from Drumchapel, said: “The class suited me because the kids are back at school. It helps you keep fit, make new friends and gets you out of the house. I might get out on a bike with my kids after doing this.”

Big Bike Revival in Scotland, which is no longer running, supported more than 70,000 people to cycle. It has been replaced by Shift, which is funded by Transport Scotland.

In 2021, an extra £1million from DfT – bringing the total funding to a whopping £3million - meant that BBR could deliver Dr Bike sessions in schools for the first time. Pop-up bike mechanic stations were set up in schools across England to help fix bikes for around 10,000 children.

This year, BBR is focusing on teaching skills and leading bike rides to improve confidence on the bike. Organisations can apply for grants up to £3,000 to cover such things as equipment to expand capacity, venue hire for learner events or instructors to lead bike rides.

What is the Big Bike Revival? View